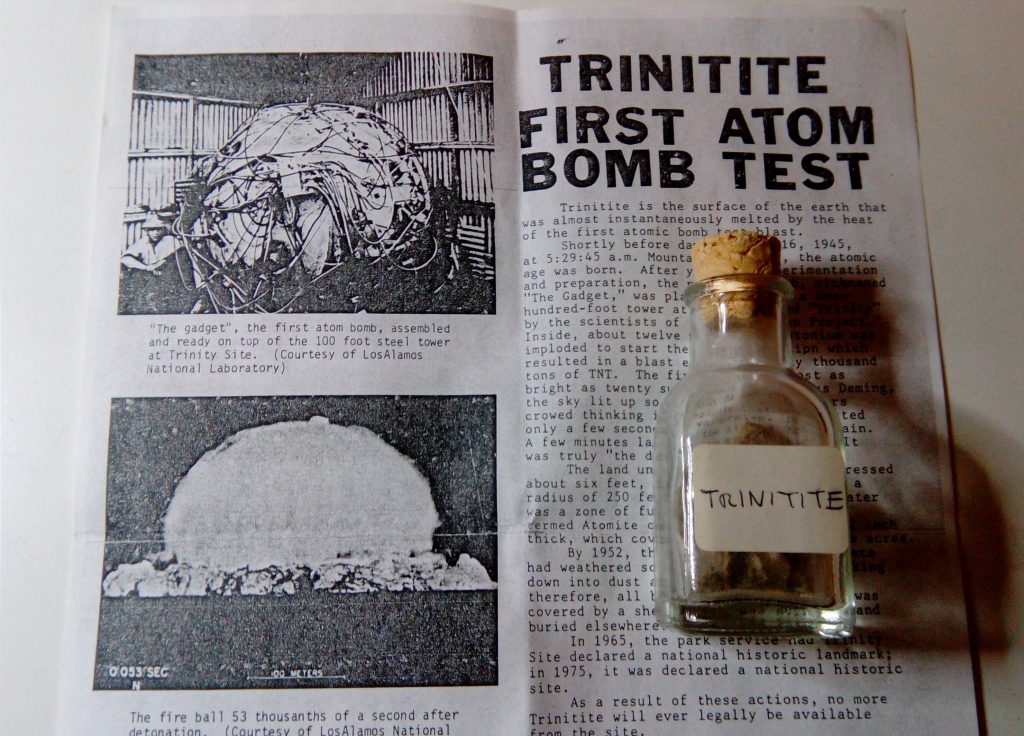 A bit of history: what is Trinitite ? 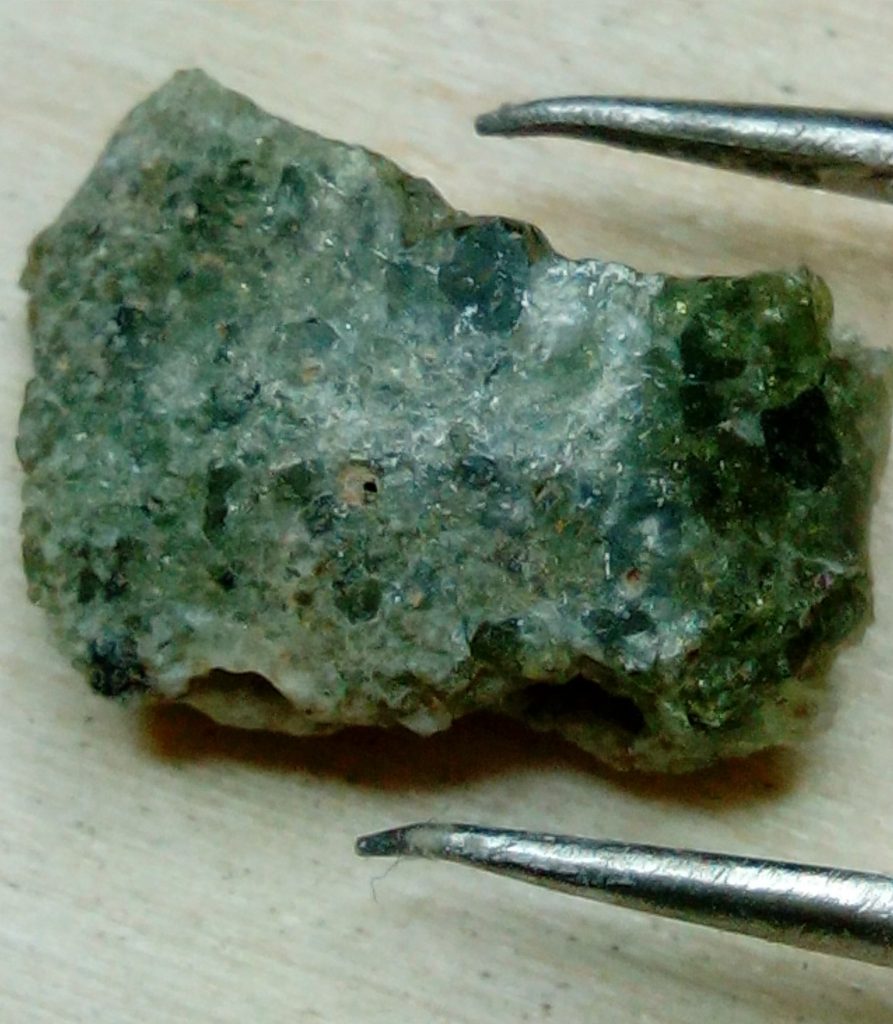 Several different types of trinitite have been identified : the most common form is green, black specimens contain iron from the metal tower that supported the bomb above the desert surface, red samples contain copper from the bomb itself and cables that connected it to the control station.

In the image on the side you can see one of our trinitite samples.

In the late forties and early fifties, samples of trinitite were collected and sold to mineral collectors as novelties. Some samples can still be found on the site of the explosion, although most were removed and buryed by the US Atomic Energy Commission in 1952 : it is currently illegal to collect the remaining material on the site, however the material collected before this prohibition it is still in the possession of collectors and it is possible to find samples of this material online : trinitite on eBay.

In the initial image of the Post we see the glass bottle containing the trinitite fragments that have been given to us to perform the analysis of the material. 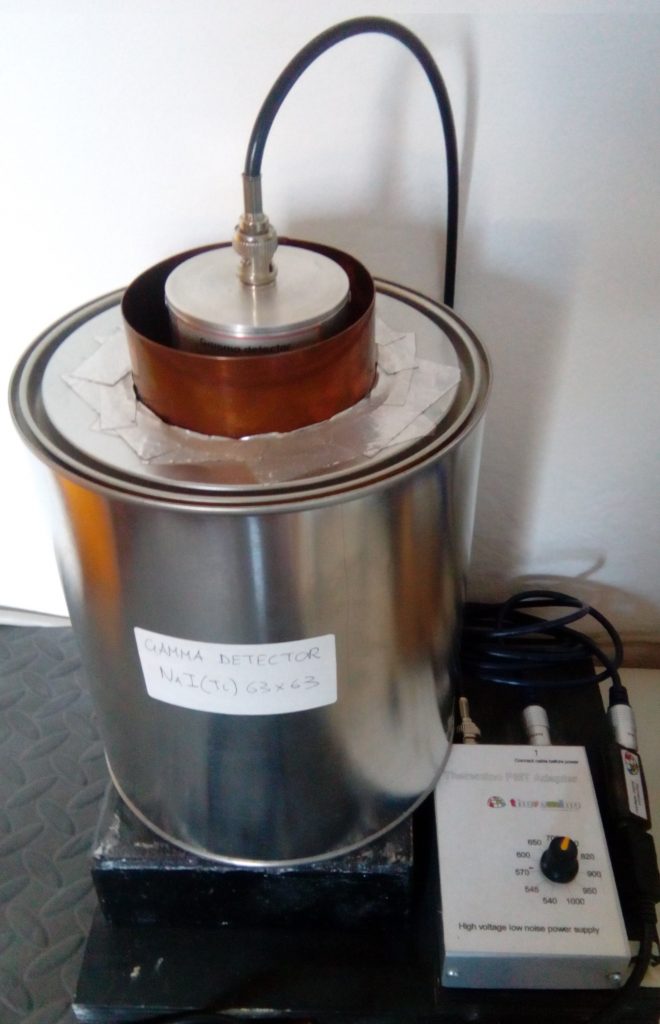 The sample of trinitite was subjected to gamma spectroscopic analysis with the instrument described in the post DIY Gamma Spectrometry, using the 63x63mm crystal sensor, positioning sensor and sample inside a shielded measurement well. The image on the left shows the detector and the measurement well. To drive the PMT we used the Theremino PMT Adapter and to process the data we have used the proven Theremino MCA.

the sample activity is low but it is easily measurable; however, a background spectrum should be acquired for an appropriate time in order to remove the background component from the sample gamma spectrum. measurement times are long: to obtain adequate data, it is advisable to measure for a time greater than 10 hours.

The background activity, measured within the well is worth about 40 CPS, the measure with the sample records about 70 CPS, the net activity of the trinitite sample is therefore around 30 CPS. This value allows us to make good measurements and at the same time makes the sample absolutely safe to handle.

From the gamma spectra it is clearly visible the presence of the following isotopes : Cesium 137, Americium 241, Europium 152. The Americium and the Cesium in particular give rise to evident photo-peaks. 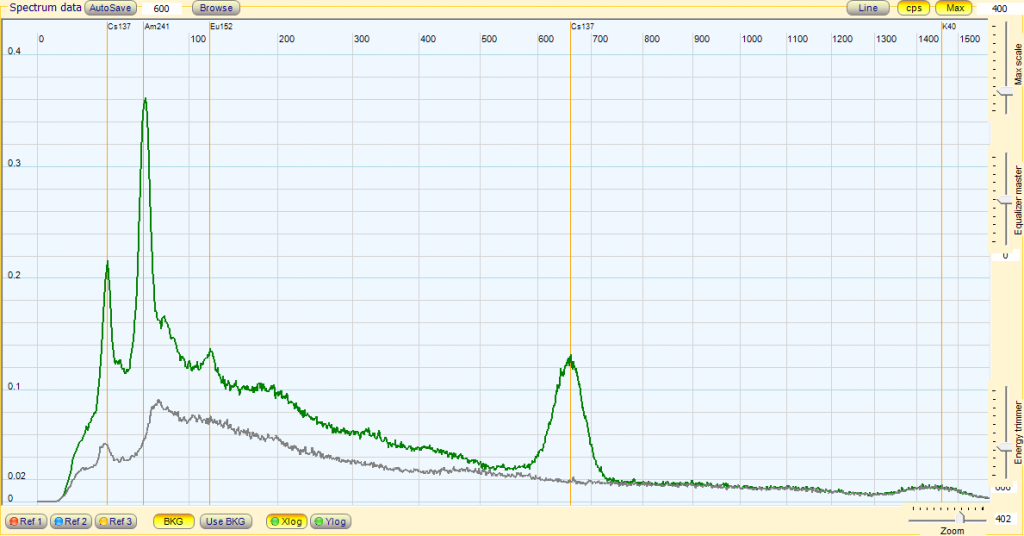 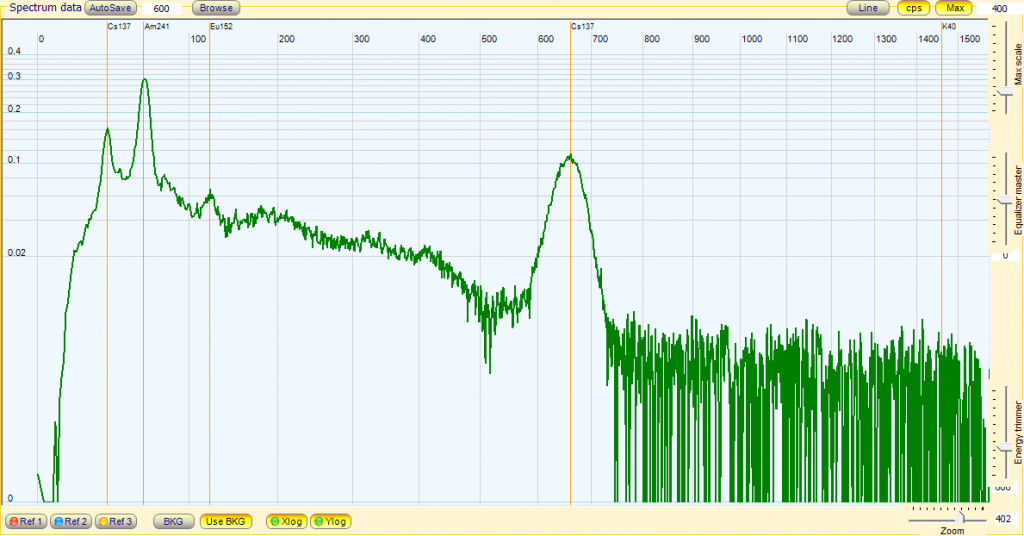 This isotope was obtained by neutron activation of the stable Europium 151 and Europium 153 isotopes, already present in the soil of the detonation site. The half-life is 13.5 years.

The sample has undergone quantitative analysis, using the gamma spectrometer and Beqmoni software in order to establish the activity of the isotopes present in the sample. Quantitative measurements of this type are described in the posts Gamma Activity Measures, Cesium 137 Activity in Contaminated Soil.
Preliminarily we made a measurement by calibrating the spectrometer with a sample source of Cs137, achieving an efficiency of 20.8 Bq / CPS, which means that the value obtained by the detector has to be multiplied by this factor in order to obtain the actual activity of the sample expressed in Bequerel. Subsequently, we placed the sample in contact with the detector and we obtained the spectrum below, in which the main gamma peaks are present:

Thanks to Beqmoni ROI feature, we are able to determine the activity of the individual isotopes, we focus on cesium 137 because it allows us to measure more precisely the activity:

The rule of radioactive decay states that : A(t) = A0 e-λt
Knowing A(t), λ, t one can easily calculate A0

These values ​​are a good estimate of the original values ​​of radioactivity and are close to other measurements that can be found in scientific literature. Naturally, in order to have more precise measurements it is necessary to use more sophisticated experimental devices such as HPGe detectors (Hyper pure Germanium detector operating at cryogenic temperatures) or mass spectrometers.

Despite the “amateur” equipment we have been able to make a fairly complete and in-depth analysis of the Trinitite sample: a piece of our recent history that marked the beginning, for better or for worse, of the atomic age.