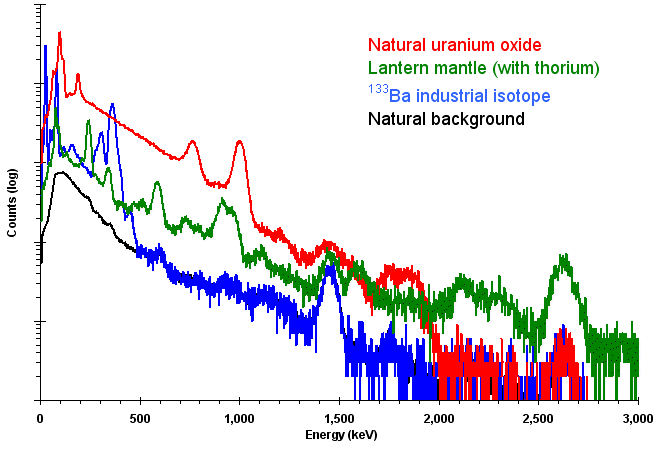 The image above, taken from the Amptek site, shows some gamma spectra: uranium, thorium, background, …. Gamma spectrometry is a powerful technique for the analysis and identification of isotopes. With some caution you can also do quantitative analysis and measurements of activity. Even in this blog we have already tried to make quantitative measurements with our DIY equipment : Measurement of Potassium Isotope K40 Activity, Cesium 137 Activity in Contaminated Soil.
We now propose some other measurements to the amateur nuclear scientist’s reach!

For this experiment we used a sample of uranium glazed ceramic : the famous fiestaware. In the glaze there is a small content of uranium oxide, which should have inside all the uranium isotopes. 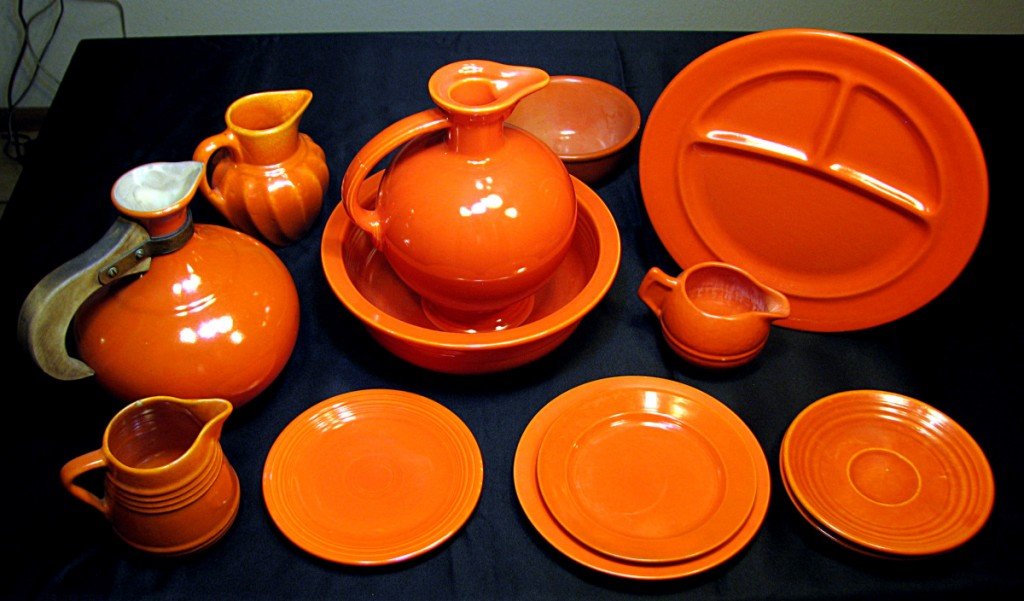 The image below shows the gamma spectrum of the sample.

For natural uranium, about 49% of its alpha rays are emitted by each of 238U atom, and also 49% by 234U (since the latter is formed from the former) and about 2.0% of them by the 235U. When the Earth was young, probably about one-fifth of its uranium was uranium-235, but the percentage of 234U was probably much lower than this.

The ratio between the specific abundance of 235U and 238U isotopes is 0.7% and this value is constant in every sample of natural uranium. Through gamma measurements it is possible to experimentally determine this ratio.

Evaluation of 235U Activity

To evaluate the activity of 235U we have chosen the emission at 185.7 KeV, which is the main gamma emission of uranium 235. In the below image the orange part corresponds to the ROI around the peak at 186 KeV.

After counting the background, the count is 4.9 CPS, taking into account that γ fraction at this emission is 57.2%, we get 8.57 CPS. Of course this is not the real activity of uranium 235, because we did not take into account the efficiency of the detector and the geometric shape factor, but it is a value that corresponds to the real activity.

Evaluation of 238U Activity

To evaluate the activity of isotope 238U we have chosen the emissions at 63 KeV and 93 KeV. These are the gamma emissions of the isotope Thorium 234, produced by the decay of Uranium 238. Since the Thorium 234 decay time is only 27 days we can assume that Uranium 238 and Thorium 234 are in equilibrium and thus have the same activity. In the images below the orange parts corresponds to the ROI around the peaks at 93 KeV and 63 KeV.

We assume, for the activity of Uranium 238, an average value of the two : 209 CPS.
As with Uranium 235, this value is also proportional to the real activity and the proportionality constant is the same because the efficiency of the detector is more or less the same in this range of energies.

With the data obtained from the measurements and by knowing the decay constant of the two 238U and 235U isotopes we are now able to calculate the isotopic ratio.
The activity of an isotope is given by the following equation :

It is well-known that the luminescent watch hands of many years ago were made with a radio-containing paint: its radioactive emission triggers phosphors that in the dark become dimly bright. This technology is no longer used because of the radio danger, especially for the workers who made these hands. It is still easy to come across today in this type of watch. 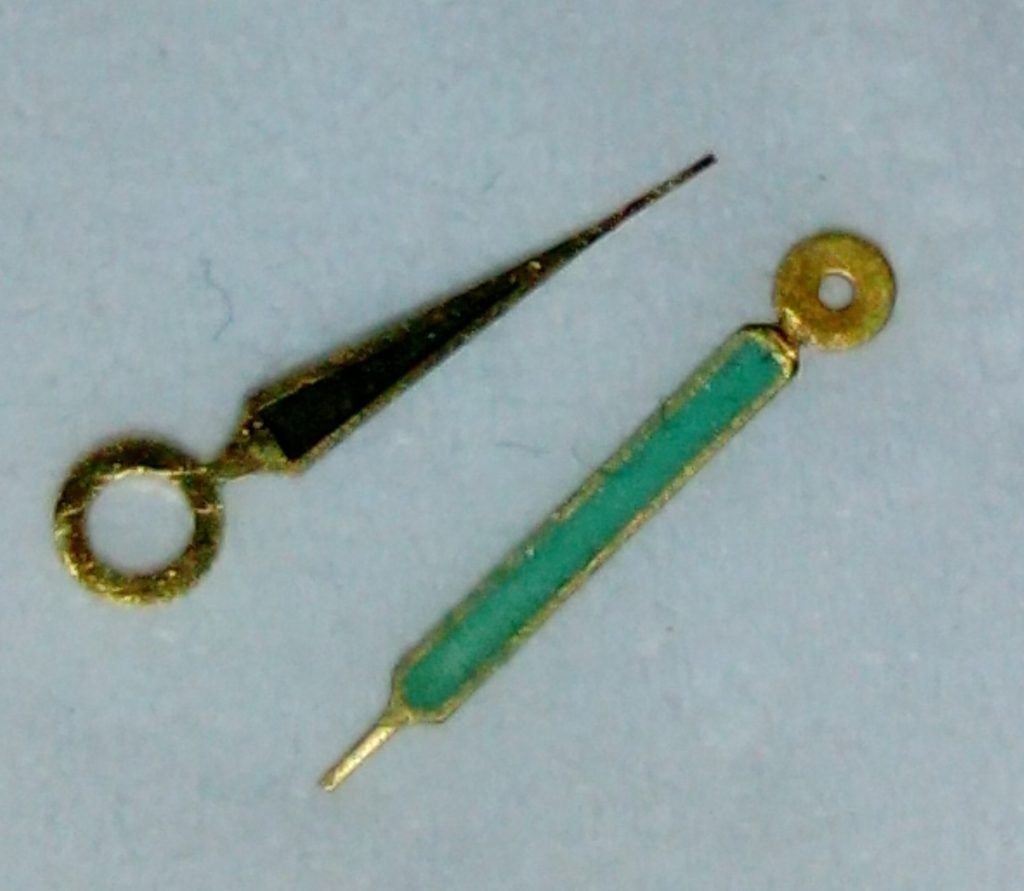 By gamma spectrometry we want to try to make an estimate of the amount of radio contained in these hands. Our sample consists of two watch hands.

Preliminarily we made a measurement by calibrating the spectrometer with a sample source of Cs137, achieving an efficiency of 20.8 Bq / CPS, which means that the value obtained by the detector has to be multiplied by this factor in order to obtain the actual activity of the sample expressed in Bequerel. Subsequently, we placed the (sealed) hands in contact with the detector by obtaining the spectrum below, in which the main gamma peaks are present:

For the evaluation of the 226Ra isotope activity we have chosen the main emissions listed above. The emission at 186 KeV is the main gamma emission of 226Ra, even if it corresponds to a small fraction of decay. Among the radio decay products, the 214Pb and 214Bi have evident gamma peaks, it must be taken into account that they are descended from radon and therefore if radon comes out of the sample, the value obtained will be lower than the actual one.
In the images below the orange part correspond to the ROI around the selected gamma peaks.

The obtained values are a bit discordant among them. The value at 609 KeV is low compared to those at 295 and 352 KeV, this may be due to the lower sensitivity of the energy crystal at highest energy. The values at 295 and 352 KeV are in rather good agreement with each other. The difference from the value of Radio 226 to 186 KeV is probably due to the migration of radon outside from the thin layer of luminescent paint.
From these considerations the most correct indication for radio activity is obtained from the measurement at 186 KeV.
We can therefore deduce that the activity of the radio in one hand is worth about 3000 Bq = 0.081 μCi
Knowing that 1 Ci is activity of 1 g of radio we can calculate the content in one watch hand : 0.081 μg

The Auer or Welsbach gas mantle is a device for generating a bright white light when heated by a flame. It was used in the past for home lighting and is still used mainly for portable camping lamps. 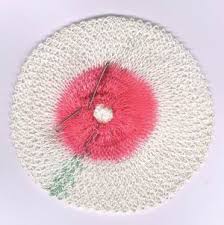 These mantles consisted of 99% of ThO2 and 1% of CeO2, which catalyzes the combustion of gas and is heated to high temperatures, due to the poor conductivity of the thorium becoming very bright. However, the thorium, due to its radioactivity has been replaced with less hazardous materials , such as yttrium or sometimes zirconium. However, it is still relatively easy to find thorium-containing mantles today.

By gamma spectrometry we want to try to make an estimate of the amount of thorium contained in these gas mantles.

Preliminarily we made a measurement by calibrating the spectrometer with a sample source of Cs137, achieving an efficiency of 20.8 Bq / CPS, which means that the value obtained by the detector has to be multiplied by this factor in order to obtain the actual activity of the sample expressed in Bequerel. Subsequently, we placed the gas mantle in contact with the detector by obtaining the spectrum below, in which the main gamma peaks are present.

For the evaluation of the activity of the isotope 232Th we chose the emissions of the isotope 228Ac and 212Pb shown above. Assuming sample in equilibrium  then the activity of 228Ac corresponds to that of 232Th, for 212Pb however it must be taken into account that this isotope comes from the thoron (radon isotope) and therefore if the thoron came out of the sample, as is probable given that it is a gas, the value you get will be lower than the actual one.
In the images below the orange part correspond to the ROI around the chosen peak ranges.

As expected, the activity measured through 212Pb is less than that obtained with the isotope 228Ac, because part of the thoron escapes from the sample. Let us assume therefore that the thorium activity in the gas mantle corresponds to about 2463 Bq = 0.067 μCi.

With the data obtained from the measurements and by knowing the decay constant of 232Th we are now able to calculate the isotopic ratio.
The activity of an isotope is given by the following equation :

Knowing λ and having measured A we can calculate N :

It turns out, therefore, that a gas mantle can contain about 609 mg of Thorium ! 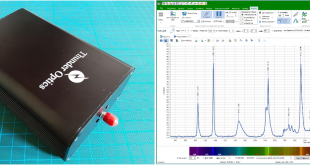 Abstract: in this post we describe the Thunder Optics spectrometer used with the Spectrgrayph software. We plan to configure and calibrate the instrument and use it for the acquisition and study of the spectra of some light sources. For the measurements we will also use some accessories such as optical fibers, collimators and calibration light sources.