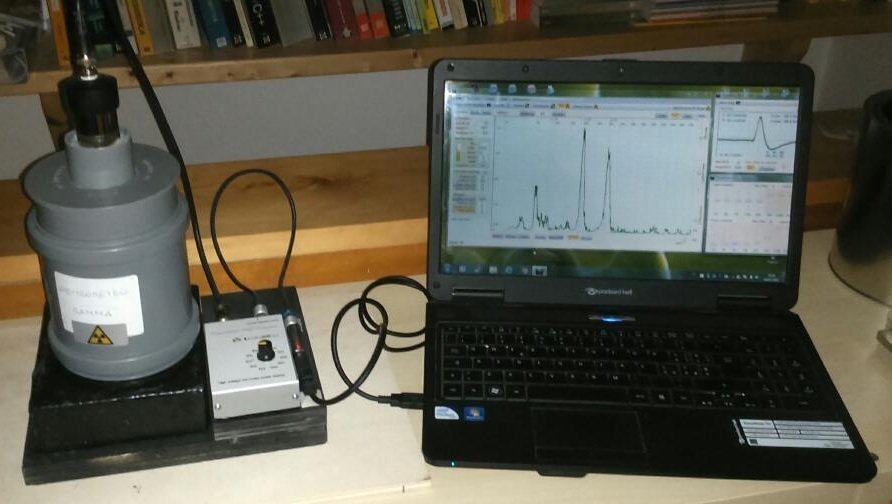 Gamma-ray spectroscopy is the quantitative study of the energy spectra of gamma-ray sources, in such as the nuclear industry, geochemical investigation, and astrophysics. Most radioactive sources produce gamma rays, which are of various energies and intensities. When these emissions are detected and analyzed with a spectroscopy system, a gamma-ray energy spectrum can be produced.

Gamma rays are the highest-energy form of electromagnetic radiation, being physically the same all other forms (e.g., X rays, visible light, infrared, radio) but having higher photon energy due to their shorter wavelength. Radioactive nuclei (radionuclides) commonly emit gamma rays in the energy range from a few keV to ~10 MeV, corresponding to the typical energy levels in nuclei

System components and principle of operation

The equipment used in gamma spectroscopy includes an energy-sensitive radiation detector, electronics to process detector signals produced by the detector, such as a pulse sorter (i.e., multichannel analyzer), and associated amplifiers and data readout devices to generate, display, and store the spectrum. The most common detectors include sodium iodide (NaI) scintillation counters and high-purity germanium detectors.
Gamma spectroscopy detectors are passive materials that wait for a gamma interaction to occur in the detector volume. The most important interaction mechanisms are the photoelectric effect, the Compton effect, and pair production. The photoelectric effect is preferred, as it absorbs all of the energy of the incident gamma ray.
The voltage pulse produced by the detector (or by the photomultiplier in a scintillation counter) is shaped by a multichannel analyzer (MCA). The multichannel analyzer takes the very small voltage signal produced by the detector, reshapes it into a Gaussian or trapezoidal shape, and converts that signal into a digital signal.

Scintillation detectors use crystals that emit light when gamma rays interact with the atoms in the crystals. The intensity of the light produced is proportional to the energy deposited in the crystal by the gamma ray. The detectors are joined to photomultipliers that convert the light into electrons and then amplify the electrical signal provided by those electrons. Common scintillators include thallium-doped sodium iodide (NaI(Tl)) — often simplified to sodium iodide (NaI) detectors — and bismuth germanate (BGO). Because photomultipliers are also sensitive to ambient light, scintillators are encased in light-tight coverings.

We have prepared two scintillation probes : one for medium energies (up to 1 MeV) and one for high energies ( > 1 MeV ). Both probes are equipped with a NaI(Tl) scintillator crystal.

The scintillation probe is connected to the preamplifier – shaper Theremino Adapter which sends pulses, suitably amplified and shaped, to the ADC contained in a USB sound card. The pulses are then acquired by the software Theremino MCA which shall display on the PC the gamma spectrum of the source.

The PMT Adapter is a circuit designed by the Theremino team to provide high voltage supply for the PMT, to extract the pulse from the PMT and to shape and amplify the pulse in an appropriate way to send it to the ADC of the PC’s sound card . The PMT HV voltage can be adjusted in a wide range from 500V to 1000V or from 700V to 1500V depending on the value of a feedback resistor. The circuit is powered by 5Vdc and this voltage can be supplied directly from the USB of the PC. The pulse shaping and amplification part outputs an approximate Gaussian pulse of about 100 μs. The images below show the circuit diagram and PCB rendering populated with components. For details, refer to the documentation on the link PMT Adapter. 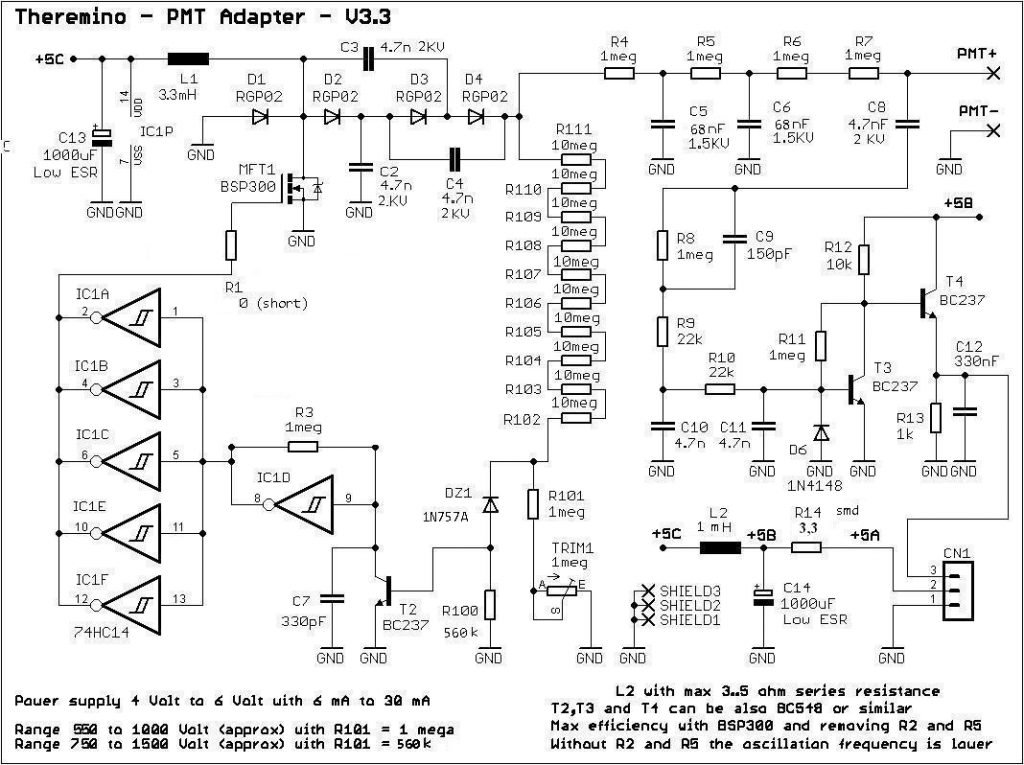 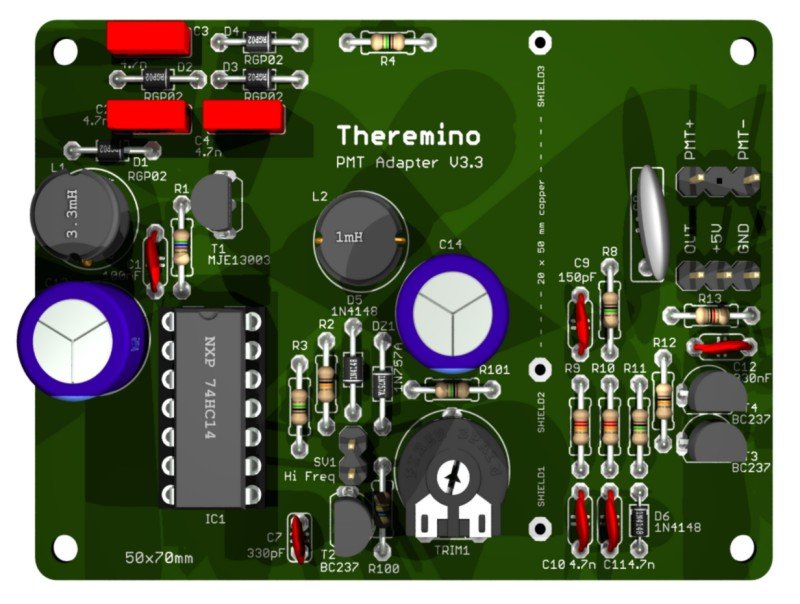 The pulse generated by PMT is “extracted” from the HV line by means of a coupling capacitor. The pulse has an amplitude of 100-200 mV, with inverted polarity, and a duration of less than 1μs. As shown in the figure below. The shaping and amplification chain aims to “stretch” the pulse up to about 100μs in duration, so it is easier to capture by the sound card. The pictures below show the pulses that are sent to the sound card for digitization. Theremino MCA is the multichannel analyzer for PMT pulses, acquired and digitized from the sound card. The software selects the pulses in order to discard malformed pulses or pulses having too much noise. The pulses are grouped (binned) according to the amplitude (proportional to the energy) in order to produce the emission gamma spectrum. In the image below we show a gamma spectrum example obtained with Theremino MCA. For details, refer to the documentation on the link Theremino MCA. 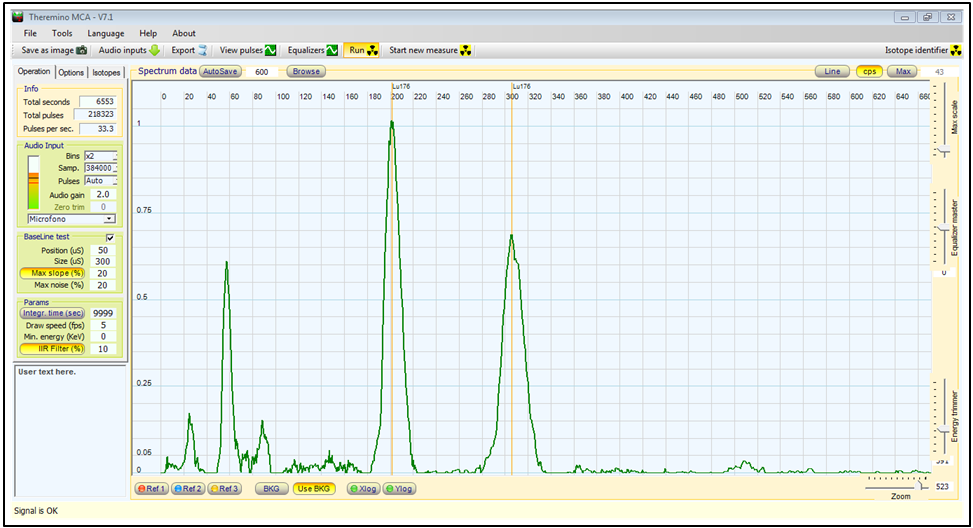 In the Terrestrial Background Radiation, the major radionuclides of concern are potassium, uranium and thorium and their decay products, some of which, like radium and radon are intensely radioactive but occur in low concentrations.  Most of these sources have been decreasing, due to radioactive decay since the formation of the Earth, because there is no significant amount currently transported to the Earth. Thus, the present activity on earth from uranium-238 is only half as much as it originally was because of its 4.5 billion year half-life, and potassium-40 (half-life 1.25 billion years) is only at about 8% of original activity.
In addition, many shorter half-life and thus more intensely radioactive isotopes have not decayed out of the terrestrial environment, however, because of natural on-going production of them. Examples of these are radium-226 (decay product of uranium-238) and radon-222 (a decay product of radium-226).

Lutetium occurs on the Earth in form of two isotopes: lutetium-175 and lutetium-176. Out of these two, only the former is stable, making the element monoisotopic. The latter one, lutetium-176, decays via beta decay with a half-life of 3.78 × 1010 years; it makes up about 2.5% of natural lutetium. As a Sample a LYSO crystal has been used.

Lanthanum is a soft, ductile, silvery-white metallic chemical element with symbol La and atomic number 57. It gave its name to the lanthanide series, a group of 15 similar elements between lanthanum and lutetium in the periodic table: it is also sometimes considered the first element of the 6th-period transition metals. Lanthanum is usually found in combination with cerium and other rare earth elements.
Naturally occurring lanthanum is composed of one stable (La139) and one radioactive (La138) isotope, with La139 being the most abundant (99.91% natural abundance). 38 radioisotopes have been characterized – the most stable is La138 with a half-life of 1.05×1011 years, followed by La137 with a half-life of 60,000 years.
As a sample we have used 100g of lanthanum oxide. Mixed with lanthanum there are some impurities of thorium and actinium 227 that leave their trace in the gamma spectrum, together with the two gamma emissions of the La138 isotope. We think that the emissions of Pb212 and Tl208 are so weak because the substance has been purified and there has not been enough time to reach secular equilibrium.

The rain water contains small amounts of radioactive isotopes which are present in the air. These are mainly due to the decay of Radon : Pb214 and Bi214. It is also present in small quantities the isotope Be7 produced by the action of cosmic rays on the atmosphere.