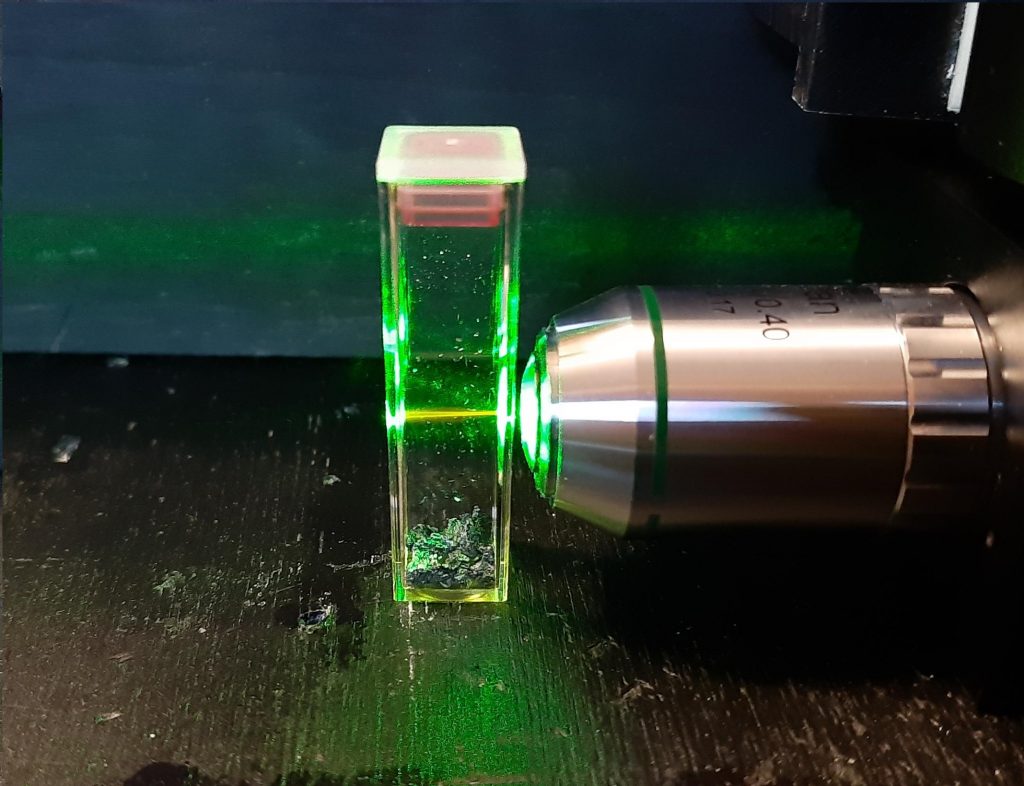 Abstract: in this article we describe the spectroscopic analysis of the fluorescence emission of iodine vapors excited by laser light at 532 nm. The maximums of the emission are related to the energy transitions between the vibrational levels of the diatomic iodine molecule. 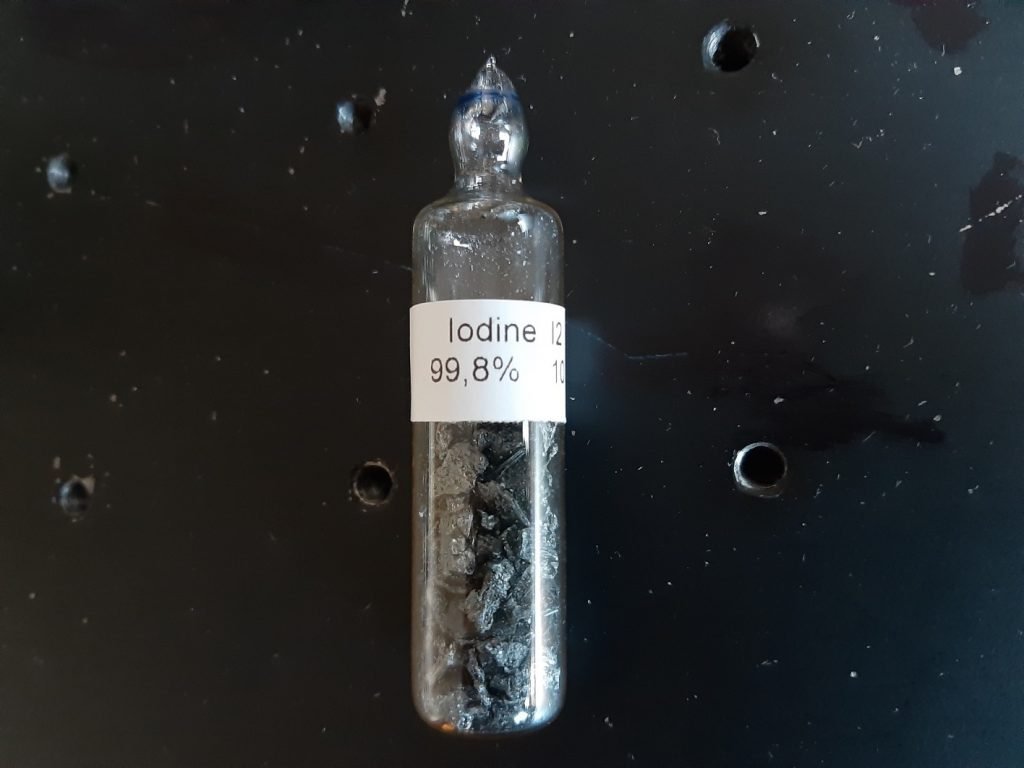 Iodine (in the image on the side our sample of metal iodine) is the chemical element with atomic number 53 and its symbol is I. It is part of the halogen group. Iodine is a dark, bluish-violet solid with an almost metallic sheen that even at room temperature sublimates into a violet vapor with an irritating smell. Iodine vapors are formed by the diatomic molecule I2. When excited by intense green light, for example from a 532 nm laser beam, the iodine vapors exhibit a characteristic yellow-orange fluorescence that can be studied with a spectrometer in order to obtain information on the structure and bonding of this diatomic molecule. 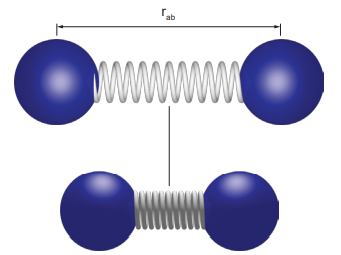 Molecular spectroscopy, molecular fluorescence spectroscopy in the specific case of this experiment on the diatomic iodine molecule, allows us to study in detail the physics of the molecular bond. Let’s start from the simplest model, the one that considers the molecule as composed of two nuclei linked together by an “elastic” force that corresponds to the classic harmonic oscillator, as shown in the image on the side. In this simplified case, the potential V(r) as a function of the displacement r of the atoms with respect to the equilibrium position is given by a simple quadratic law:

The frequency of this harmonic oscillator is the following:

with µ the reduced mass of the system, ωosc the natural frequency of oscillation of the bond and keq the equivalent elastic constant of the oscillator. Solving the Schrodinger equation for the harmonic potential we obtain the wave functions and the possible vibrational energy levels En :

Where ν is the quantum number of the system and ħ is Planck’s constant. From this result we see that energy is quantized, which means that only discrete energy values ​​are possible, multiples of ħωosc  as (ν + ½); this is a general feature of quantum mechanical systems when a particle is confined. Second, these discrete energy levels are equidistant. Third, the lowest energy obtainable (the energy of the state corresponding to ν = 0, called the ground state) is not equal to zero, but is ħω/2; this is called zero point energy. Due to the zero point energy, the position and momentum of the oscillator in the ground state are not fixed (as they would be in a classical oscillator), but have a small range of variance, in accordance with the Heisenberg’s uncertainty principle.

These results describe the energy states within the harmonic potential. However, this model fails to explain the configuration of two separate atoms, which is achieved when enough energy is provided to dissociate the molecule. Philip McCord Morse proposed in 1929 a different mathematical model of the potential for a diatomic molecule. This is a better approximation for the vibrational structure of the molecule than the harmonic oscillator because it also includes the existence of unbound states.

Where De is the dissociation potential, and re is the equilibrium distance between the two nuclei. The two potential curves, harmonic and Morse are compared in the diagram of figure 1. 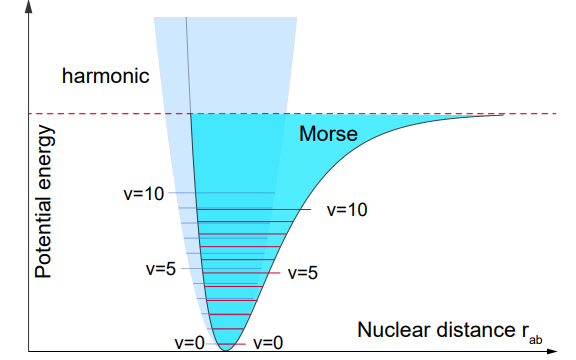 From the diagram showing the trend of the Morse potential, it can be seen how the spacing of the energy levels progressively reduces, with respect to the harmonic potential, in which it remains constant.
We also need the potential curve to represent and analyze the radiative transitions between molecular energy levels. Compared to the modifications involving electrons during the transition, the nuclei, since they are much heavier than electrons, are practically stationary, so the internuclear distance remains constant and the electronic transitions are represented by vertical lines. This is called the Born-Oppenheimer approximation.
Electronic transitions obey selection rules based on angular momentum conservation and the Franck-Condon principle. This principle states that an electronic transition from one vibrational level to another is more probable the more the wave functions corresponding to the two states are superimposed. The diagram of figure 2 shows the electronic transitions between the base level and the first excited level. In particular, the absorption transition of the excitation laser at 532 nm and the subsequent fluorescence emissions due to the relaxation of the electrons towards the vibrational energy levels of the ground level are shown. 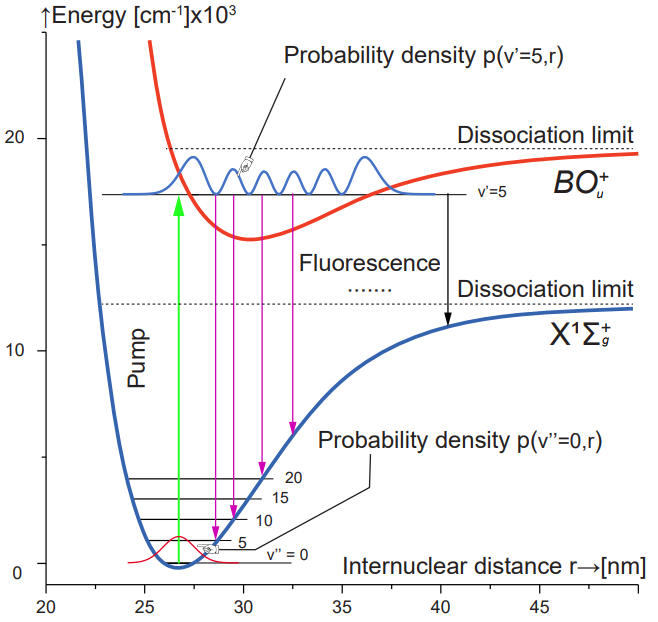 From the spectroscopic study of the electronic transitions it is possible to obtain quantitative information on the trend of the molecule’s potential. The energy, in the spectroscopic field, is commonly expressed in units equal to cm-1 and is indicated with the letter: G = E [cm-1] = 1/λ = ν’, the energy differences between a level and the adjacent level will be given by:

For a Morse potential it can be shown that:

Where ωo is the fundamental frequency and the anharmonicity product ωoXo models the first order deviation from a harmonic oscillator. By calculating ΔG we get:

The trend of ΔG with respect to (ν + 1) is linear with a slope of 2ωoXo and an intercept equal to ωo (this relationship is known as Birge Sponer law). From the spectroscopic analysis of the fluorescence emission we can measure ΔG as a function of (ν + 1), determine the regression line that best approximates the data and then derive the parameters of the Morse potential.

The setup of this measurement is based on the DIY Raman system described in previous posts. Grains of solid iodine are placed in a cuvette, the cuvette is heated, for example with a flow of hot air so that a sufficient amount of vapors is developed inside the cuvette. The cuvette, saturated with iodine vapors, is placed in front of the objective of the Raman system and the spectrum of the fluorescence induced in the vapors by the laser beam is acquired (Fig. 3).

In figure 5 we report the fluorescence spectrum with the indication of the maxima (in nm) and the visual spectrum.

Figure 6 shows the detail of the spectrum, corrected with the baseline, in order to make the maximums of the fluorescence emission more evident.

Fig. 6 – Detail of the fluorescence spectrum of iodine vapors

From these data, and knowing that the reduced mass of the iodine molecule μ = 1,05×10-25 Kg, we can also calculate the other parameters of the Morse potential of the molecule:

The parameters calculated with our data agree well with the data published in the scientific literature. 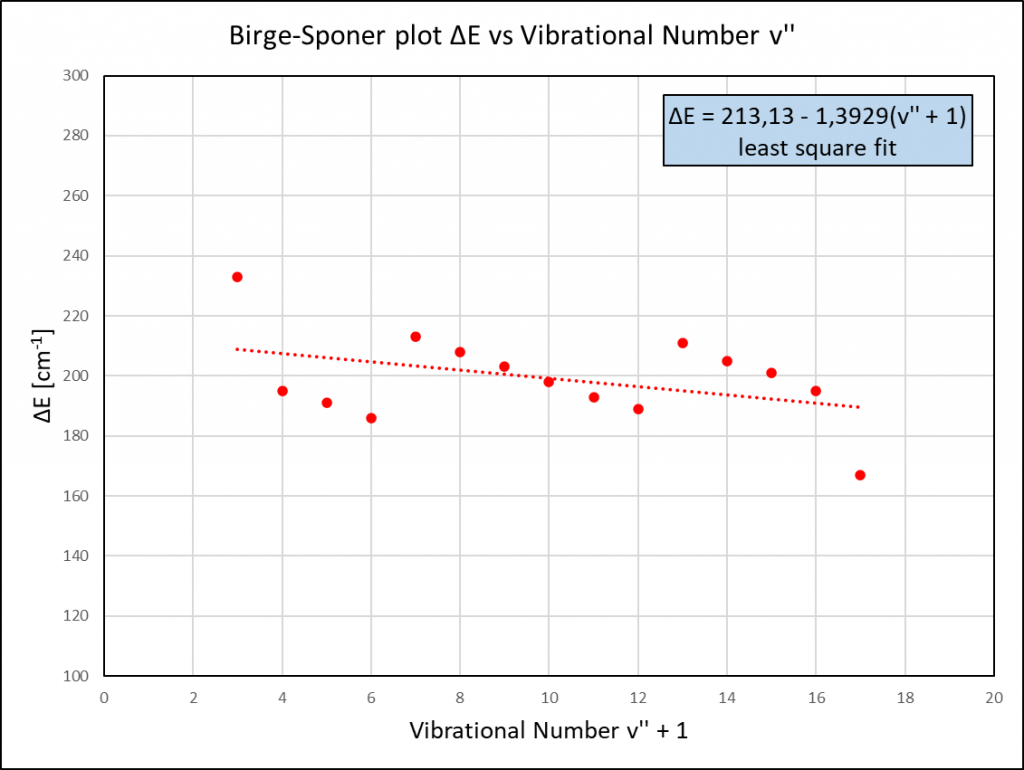 Fig. 7 – Energy transition ΔE as a function of the vibrational quantum number ν

With the data acquired from the spectra we can determine the polynomial with the coefficients of the Dunham expansion which constitutes a way to link the energy of the energy level to the vibrational quantum number (Fig.8). 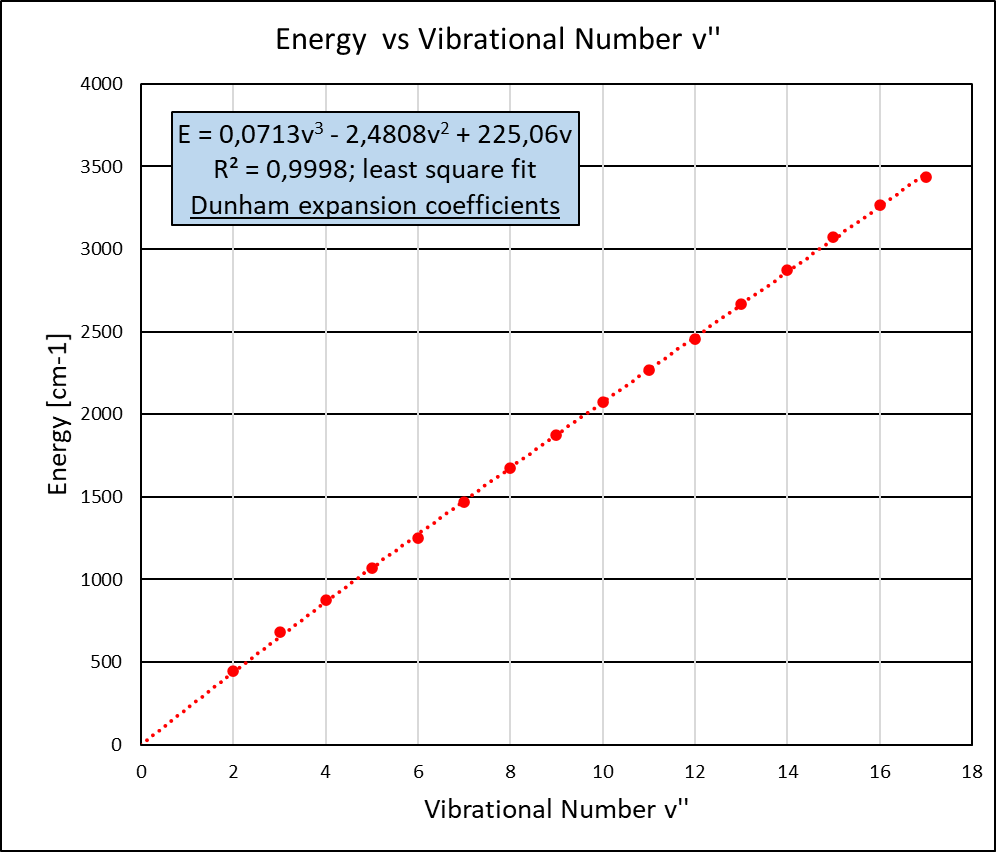 Fig. 8 – Vibrational energy E as a function of the vibrational quantum number ν

The spectroscopic analysis of the fluorescence of iodine vapors, carried out with our DIY instrumentation, allowed us to investigate the vibrational energy levels of the diatomic iodine molecule. 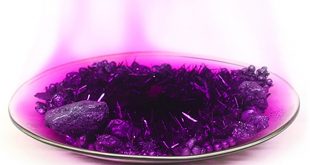