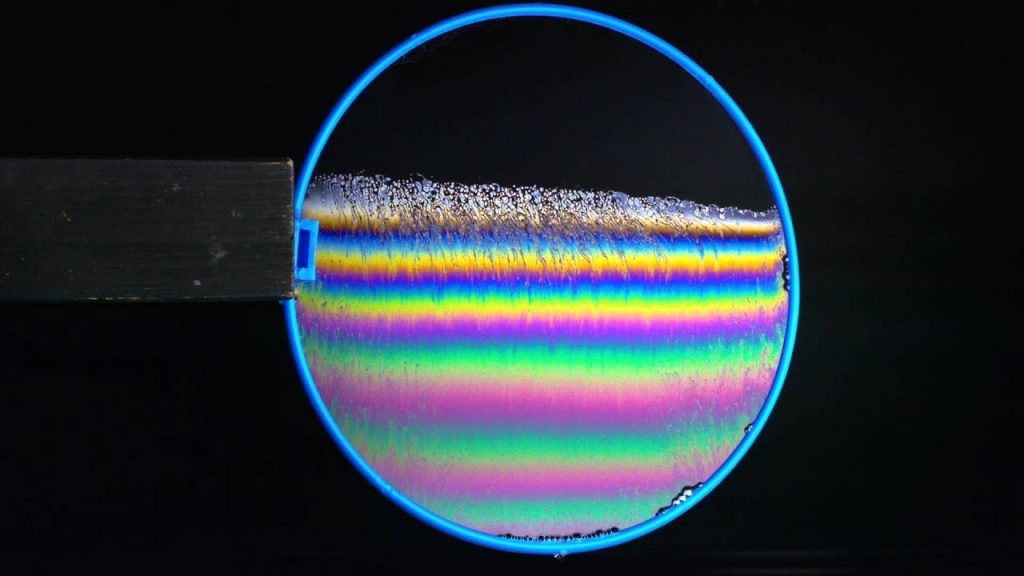 Abstract: in this post we describe the application of the spectrometer and the Spectragryph software in the reflectometry measurements of thin films. The light reflected by thin films, under certain conditions, presents the phenomenon of interference (constructive and destructive). This physical phenomenon can be used to study the optical properties of the thin film and to measure its thickness.

In a previous post: Thunder Optics SMA Spectrometer & Spectragryph, we described the Thunder Optics SMA spectrometer (hereafter referred to as the TO spectrometer) and used it to acquire the spectra of some light sources. In the post Reflectance Spectroscopy & Colorimetry we subsequently described reflectance measurements. We are now continuing the experimentation activity using this tool in thin film reflectometry applications.

Reflectometric spectroscopy is a physical method based on the interference in white light that is observed in correspondence with the reflection on thin films, this method can be conveniently used to measure the thickness of the film if the refractive index of the material is known. When the light hits the film at a certain angle Θ, there is interference between the light reflected from the incident surface and the light reflected from the opposite surface, as shown in Fig.1-a. Under these conditions, the wavy interference spectrum shown in Fig.1-b is created. Counting the number of peaks (or valleys) in the interference spectrum within a given wavelength range allows you to calculate the film thickness using expression (1).

Fig. 1 – (a) Interference of light reflected from the thin film interfaces, (b) Reflectometry spectrum

(1) Formula for calculating the thickness of the Film, note the refractive index n and the number of interference maxima Δm between the two wavelengths λ2 and λ1

The experimental setup consists of the probe for measuring reflectance (described in the previous post Reflectance Spectroscopy & Colorimetry), the Mini Light Source and the spectrometer. For these measurements we used the Thunder Optics spectrometer and a Czerny-Turner spectrometer from B&W Tek. Fig. 2 shows the instrumentation placed on our optical bench. 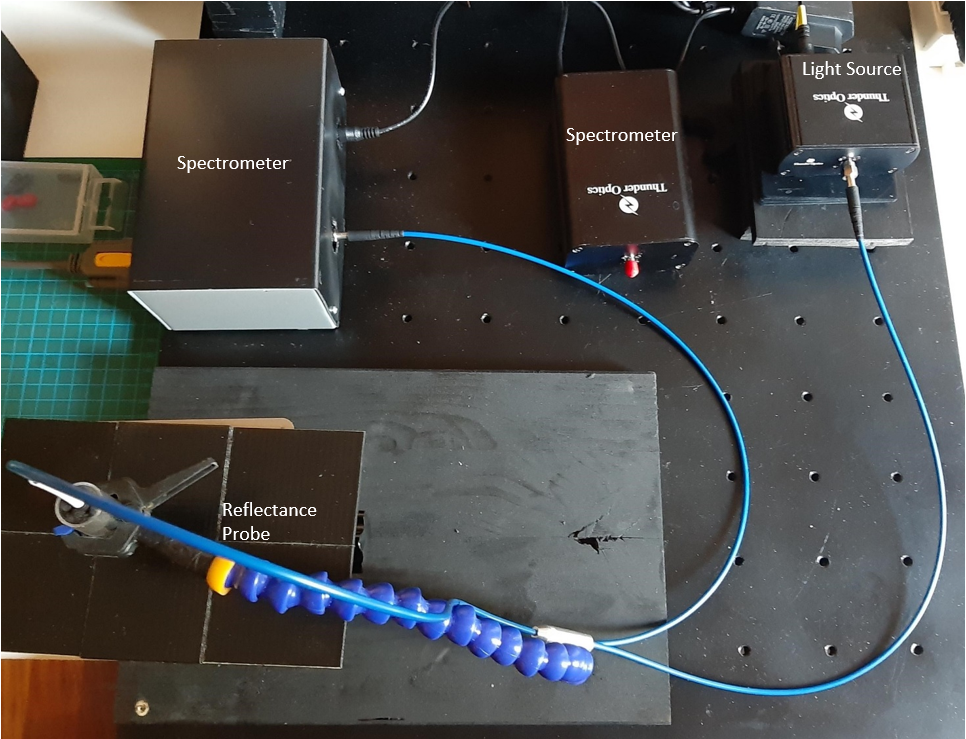 In the following image we show the detail of the measurement of the thickness of a plastic film and a thin sheet of Mica. 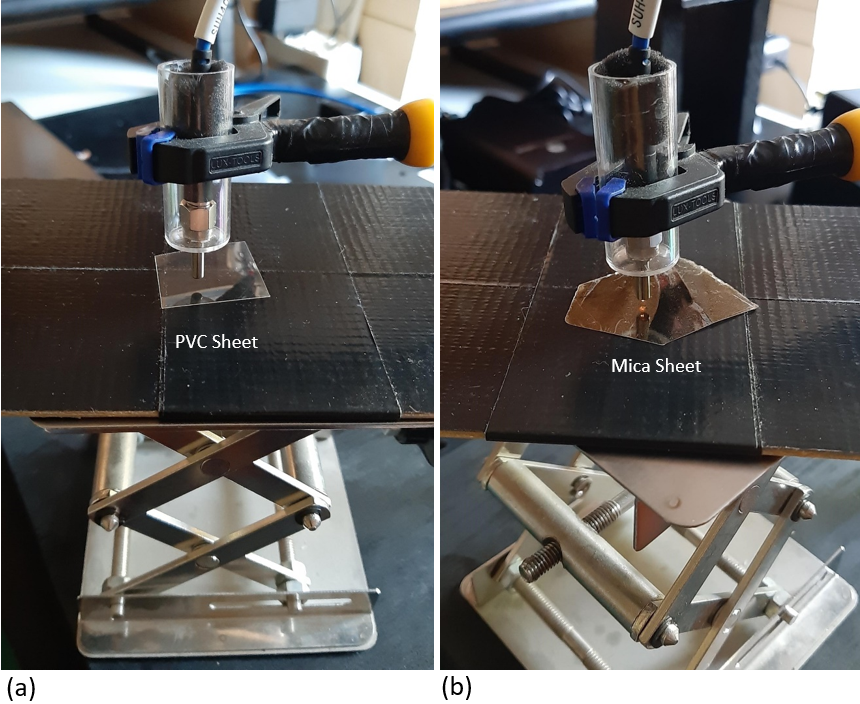 After having acquired the reflectance spectrum of the thin film under examination, we can exploit a feature of the Spectragryph software that allows us to determine the thickness of the film, given the refractive index of the material. In the Analyze tab choose the Film Thickness button (Fig. 4)

A window opens that allows us to enter the data relating to the refractive index, the angle of incidence (usually 0°) and the range of wavelengths in which to count the number of maxima (Fig. 5). The “Calculate” command performs the calculation described by the relation (1) of the previous paragraph. 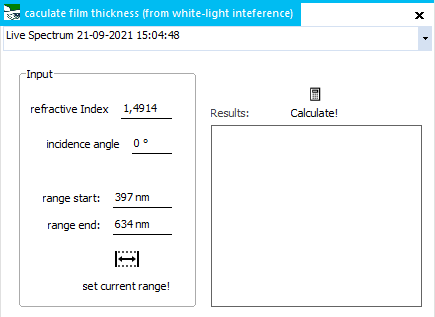 We have also applied the reflectometry method to measure the thickness of optical coatings applied to substrates, for example the anti-reflective coatings present on LCD displays or the layers of interference optical filters. In Fig. 9 we report the result obtained by examining an LCD: the coating has a thickness of about 8 μm. In Fig. 10 we report instead the spectrum obtained by examining an optical filter, in this case the thickness is very small (<1 μm) in fact the undulations are very few.

Fig. 9 – Reflectometry Spectrum from an LCD

Having available in the laboratory some thin sheets of mica we tried the reflectometry technique also on these samples, obtaining the graph shown in Fig. 11. The measurement gave a value of about 10 μm for the thickness of the thin layers of the sheets.

The last reflectometry measurement was made on soap bubbles! The soap films were obtained with a solution of water and dish detergent, to which we added a little table salt. With a copper wire we have shaped an “eyelet”. By immersing this siple tool in the solution, thin films are obtained which can last over 10 seconds (Fig. 12). 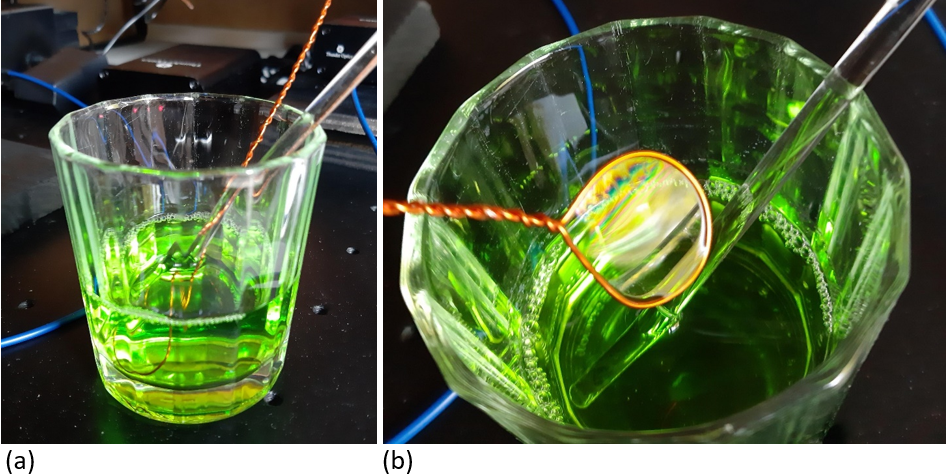 Fig. 12 – (a) Solution to create soap bubbles – (b) Example of soap film on a copper wire support

The obtained films easily show the phenomenon of iridescence (Fig. 12 b) which is caused by the same interference that causes the oscillations in the reflectometry spectrum. We measured several films, always obtaining very marked reflectivity oscillations, with thicknesses ranging from 2 μm to 8 μm (Fig. 13 – 14 – 15).

Our apparatus consisting of a spectrometer, Thunder Optics light source and reflectometry probe, has proved to be suitable for application to the reflectometry technique on thin films, with the aim of qualitatively demonstrating the phenomenon of reflected light interference and measuring the film thickness. We have successfully applied the reflectometry technique to measure the thickness of plastic films, optical coatings and thin soap films. Above all these last measurements have given interesting results that deserve to be deepened with a more extensive study on the optical properties of “soap bubbles”.