Characterization of RF Components with an RTL-SDR Device 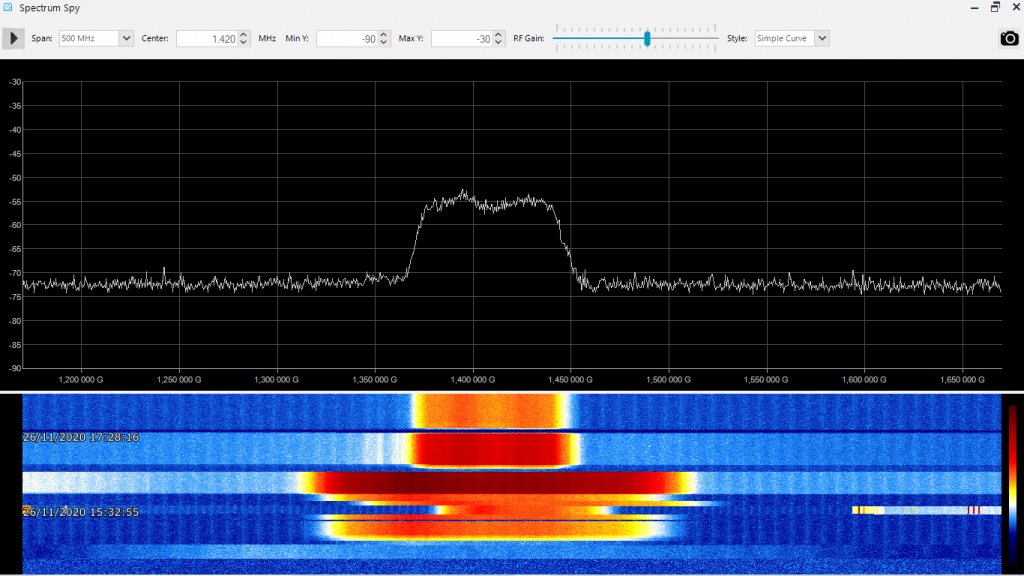 Abstract : SDR devices are truly a “Swiss Army Knife” in the field of RF signal management. In this post we show their application in studying the frequency behavior of RF components.

With a wide-band noise generator and SDR device it is quite easy to set up a system for the frequency characterization of RF components such as filters or amplifiers. The SDR device is practically used as a device for measuring the RF power, by scanning the chosen frequency range, the frequency response of the component, filter or amplifier under examination is obtained. The SDR receiver control software must be able to determine the signal strength: one option is the rtl_power command line program. We used the Win SpectrumSpy program, present in the Airspy bundle. The GUI of the program is shown in the cover image of the post. The program allows you to configure the frequency range and the RF amplification level. The program is easy and functional, but it lacks the possibility of saving on file, for example in CSV format, the data shown on the screen.

The image below shows our white noise source. The main part is a 12Vdc powered device that is easily found on the online market (eBay). The model we have is signed BG7TBL, construction details are not available, however the measurements we have made show a practically flat spectrum up to the frequencies (1.7GHz) that we can measure with our SRD Airspy. This source, however, is not calibrated, for our purposes it is still more than enough. If necessary it is always possible to calibrate it in order to have an absolute reference.
Our noise generator also includes two attenuators. The first is a digital attenuator powered at 5Vdc that allows you to configure the attenuation factor by means of dip-switches in 0.5dB steps, the second is a passive attenuator with resistive network that provides four attenuation levels: 0, 10, 20, 40db.
The presence of the attenuators is important in order to finely adjust the output level of the noise generator.

With our noise generator and thanks to the use of SpectrumSpy software we have analyzed some of the RF components that we have used in our radio astronomy projects. In the following image and diagram we show the 145 MHz filtered preamplifier that we used in receiving the radio meteoric echoes. 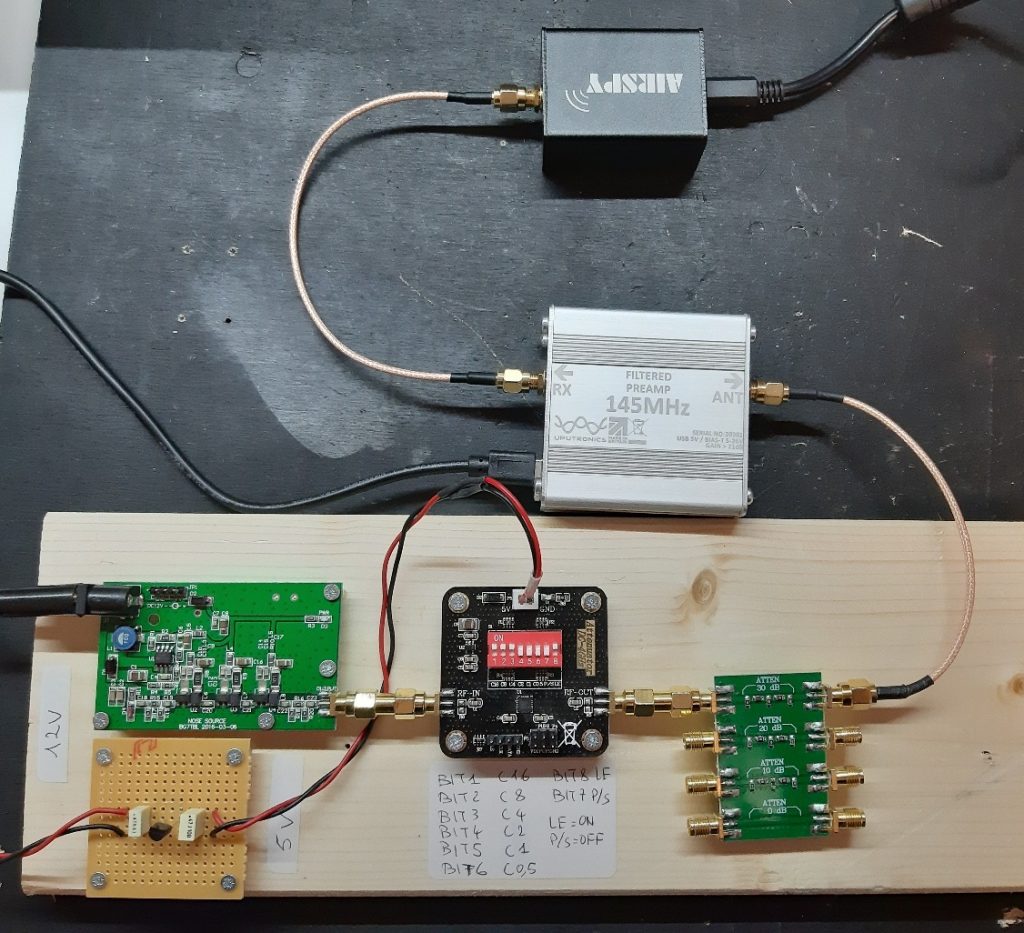 The coupled noise generator and SDR device allows you to easily increase the frequency up to the limits of the SDR device. We can easily verify the frequency behavior of the SAW band-pass filter centered at the 1420 MHz frequency that we used in our radio telescope. 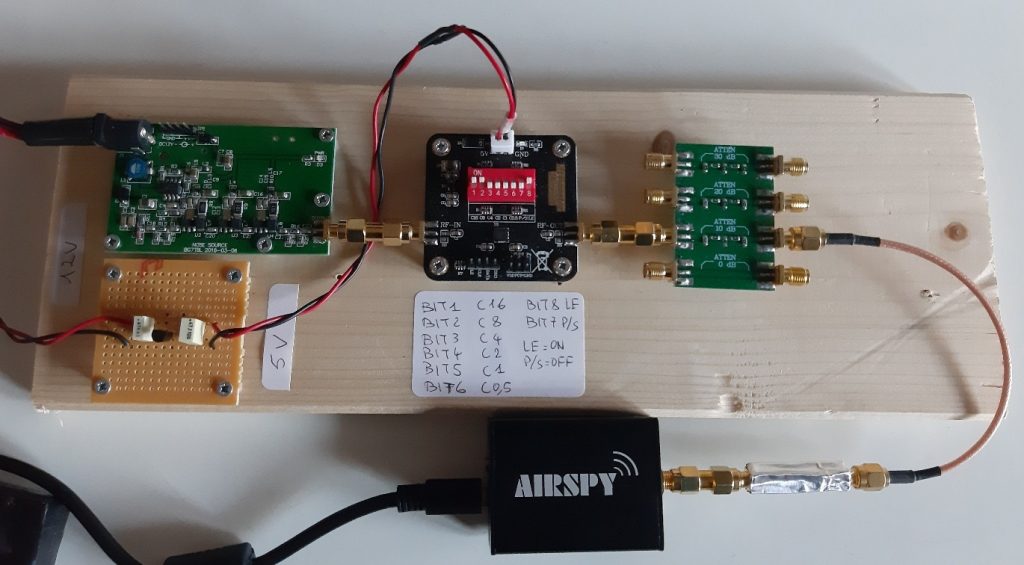 As for the SAW filter, the low-noise preamplifier we used to receive the 1420 MHz neutral hydrogen signal was also subjected to verification. The frequency response shows a smooth pattern with a flat gain across the entire passband. 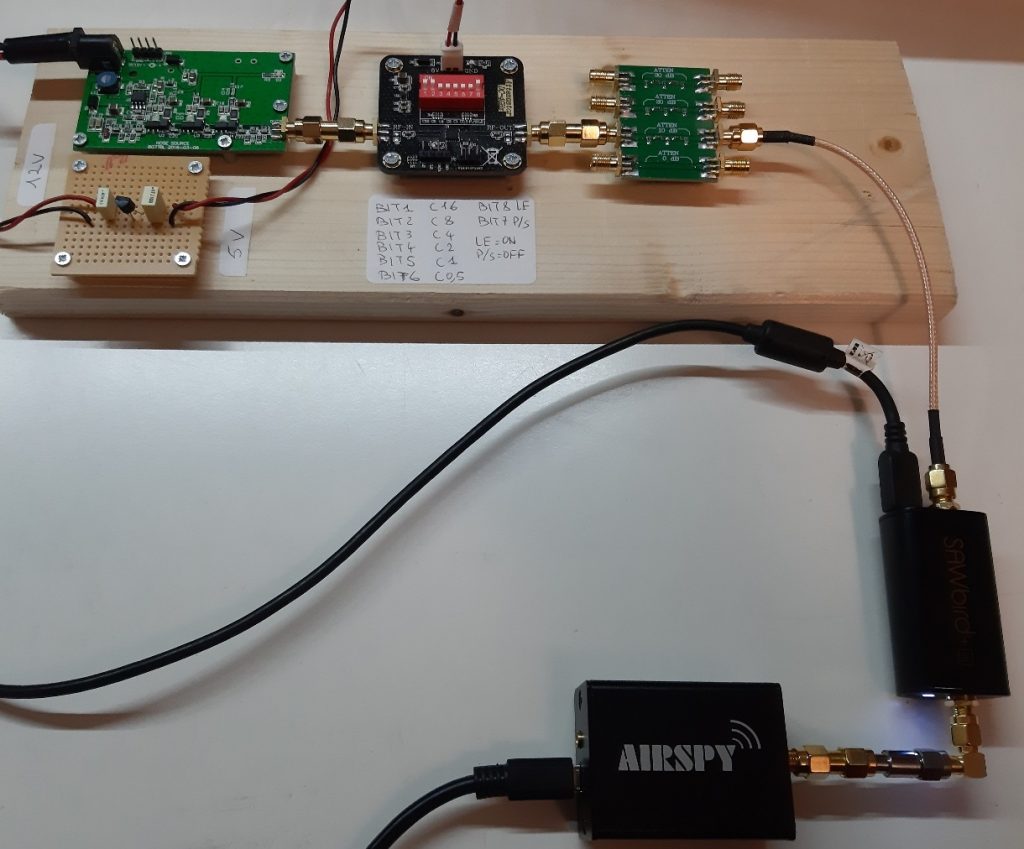 An inexpensive and widely used band-suppression filter is the so-called “coaxial stub”. It is a piece of coaxial cable that is connected with a T-connector to the antenna cable. The effect of this addition is to act as a band-eliminating filter (notch filter). The length of the cable section is determined by calculating 1/4 of the wavelength and multiplying the result by the speed factor of the cable, for an RG58 like ours the speed factor is 0.66. In the example shown below, the length of cable has a length of 0.5 m and should give rise to a 99 MHz notch filter, as can also be seen on the diagrams. Note the minima also present in correspondence with the upper harmonics. 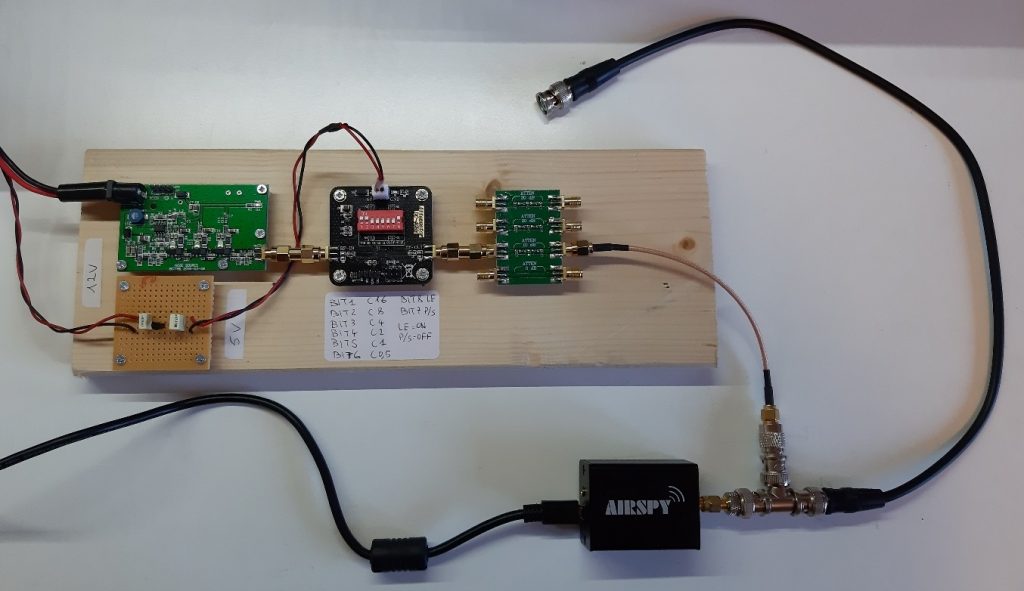 SDR devices have also proved useful in a “lab application” like the one described in this post. Their versatility places no limits on their possible uses, if not the availability of software suitable for processing the data produced by these devices.