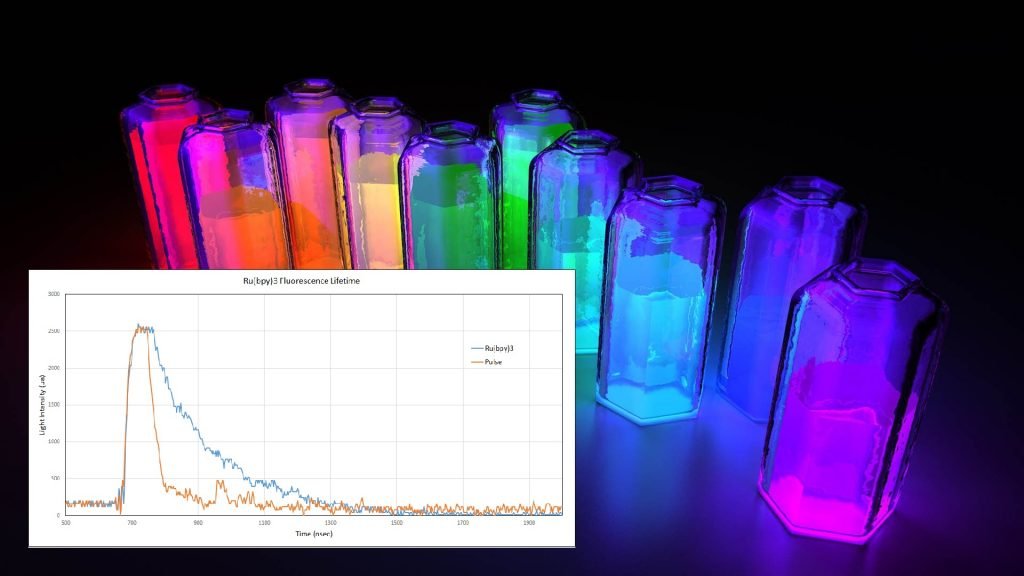 Abstract : fluorescence is a physical phenomenon as common as it is fascinating. Many substances show this phenomenon and, in our blog, we have dealt with it several times, measuring the spectrum and intensity of the emission. Now we want to try to measure the time trend in order to highlight the exponential decay and measure the lifetime of the emission. This is a difficult measurement because the characteristic times of fluorescence are extremely short, in fact they fall within the nanosecond range.

In this post we explore with some detail the phenomena of fluorescence. This topic has already been presented in the previous post: What is Fluorescence.  As already explained, fluorescence is the property of some substances to re-emit (in most cases at longer wavelength so at lower energy) the received electromagnetic radiation, in particular they absorb the ultraviolet radiation and re-emit it in the visible.
The mechanism of fluorescence is the following : an incident radiation excites the atoms of the fluorescent substance, promoting an electron to a less bound energy level (orbital), with more energy and thus more “external”. Within few tens of nanoseconds, the excited electron returns to its previous level in two or more stages, ie through one or more intermediate-energy excited states, as shown in the figure below : 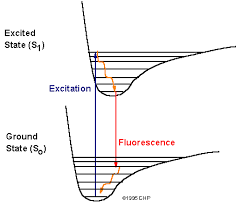 Exciting the sample with an incident radiation pulse, instead of a prolonged radiation, ie with very short duration (~ns), it is possible to study the fluorescence emitted from the sample over time. It occurs that the decay phenomenon from the excited state has an exponential trend with a specific decay time which can vary from picoseconds to nanoseconds, this constant τ is called the fluorescence lifetime : 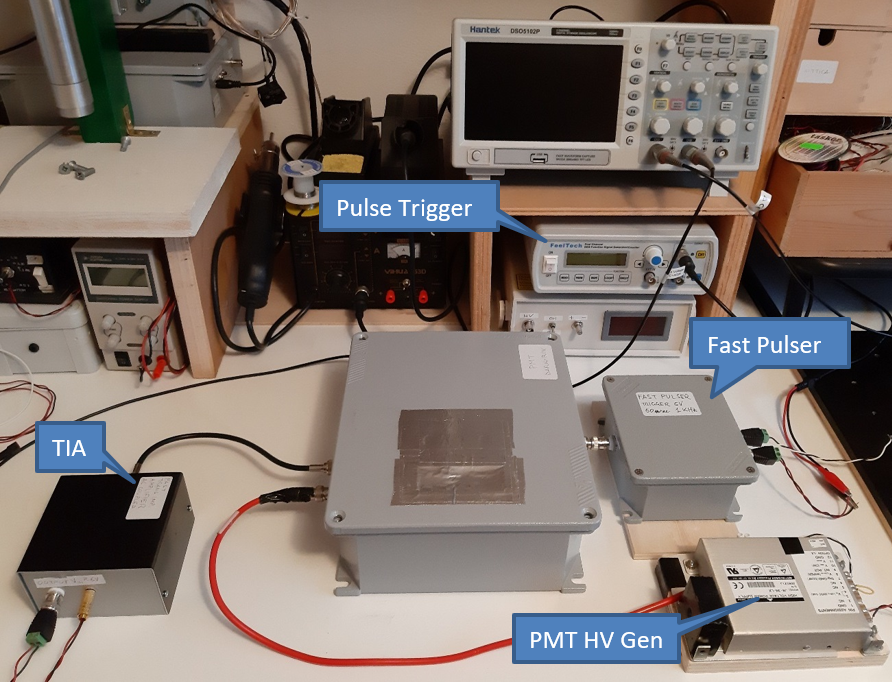 The most important component of the device is the “fast pulser” which was described in the post: Fast LED Light Pulser & SiPM (ENG). The circuit drives a UV LED (405 nm) via a “high voltage” powered avalanche transistor. The use of the avalanche transistor together with the care in the choice of components and the care in the assembly of the circuit, aimed, as far as possible, at minimizing the inductance, make it possible to achieve extremely short discharge times, of the order of nanoseconds. Everything is battery powered and placed inside a metal box, as shown in the image below. To obtain short pulses, it is essential to keep the LED connections as short as possible. 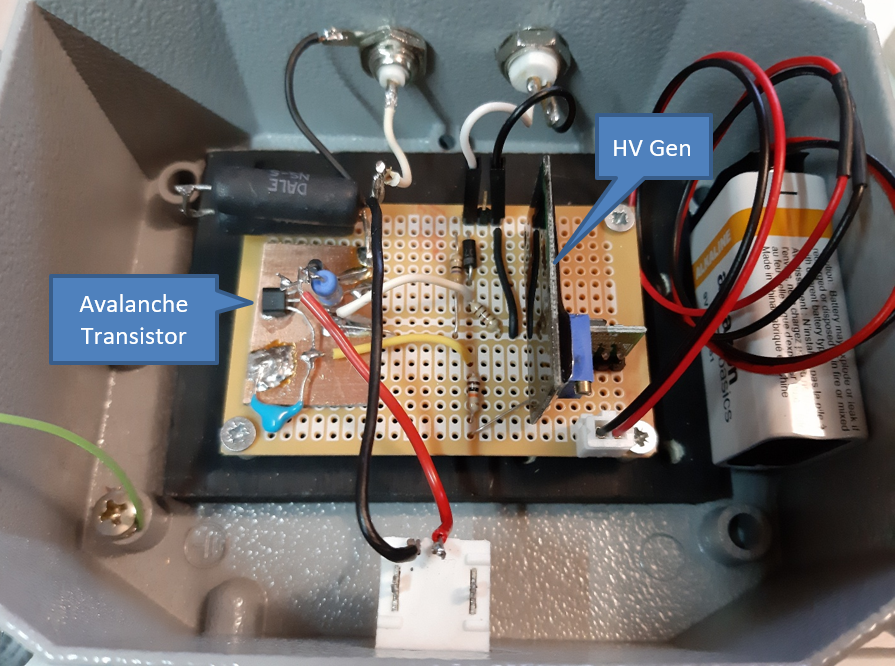 The trace below shows the current pulse (yellow) that goes through the discharge circuit, and the pulse of light emitted by the LED as obtained by the photomultiplier (blue). It is noted how the current pulse is extremely short, a few nanoseconds, while the pulse of light produced by the LED is longer but still does not exceed 20-30 nanoseconds. Probably, shorter pulses can also be obtained by carefully selecting the LED to be used. 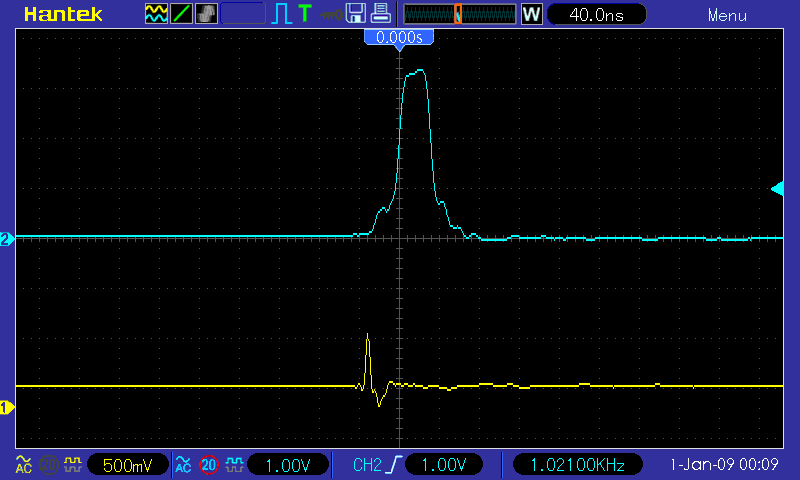 To measure the intensity of the fluorescence emission we used a photomultiplier tube placed inside a light-tight container that we have called “dark box”. This experimental setup was described in the post Low Light Detection with PMT. In the dark box there is also the UV LED for the emission of the excitation pulse. The LED is placed transversely with respect to the photomultiplier, as shown in the image below. 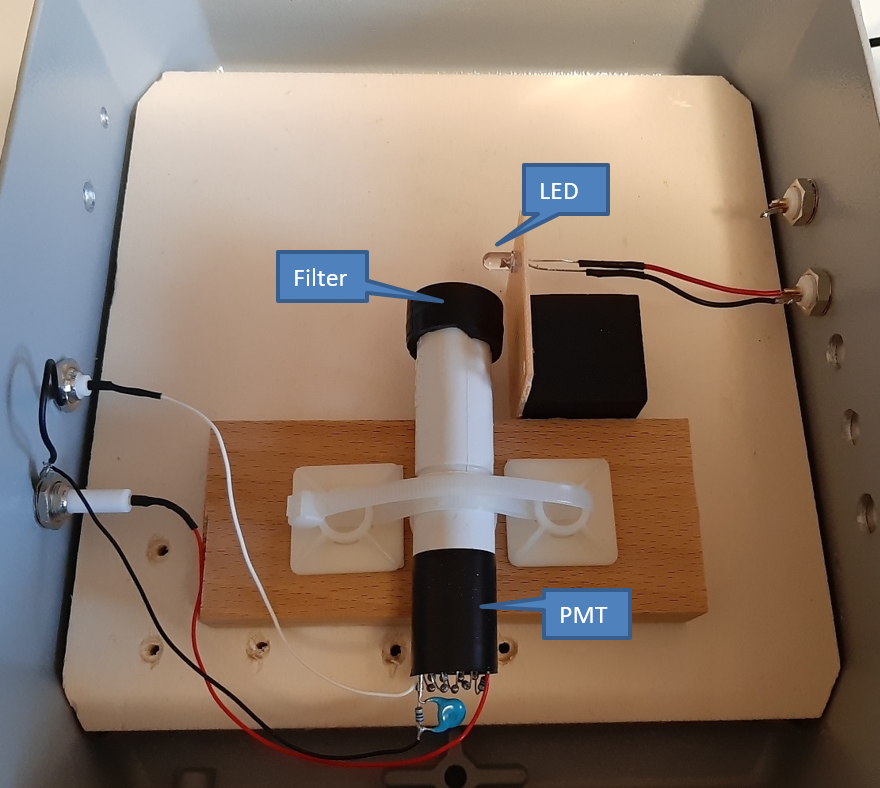 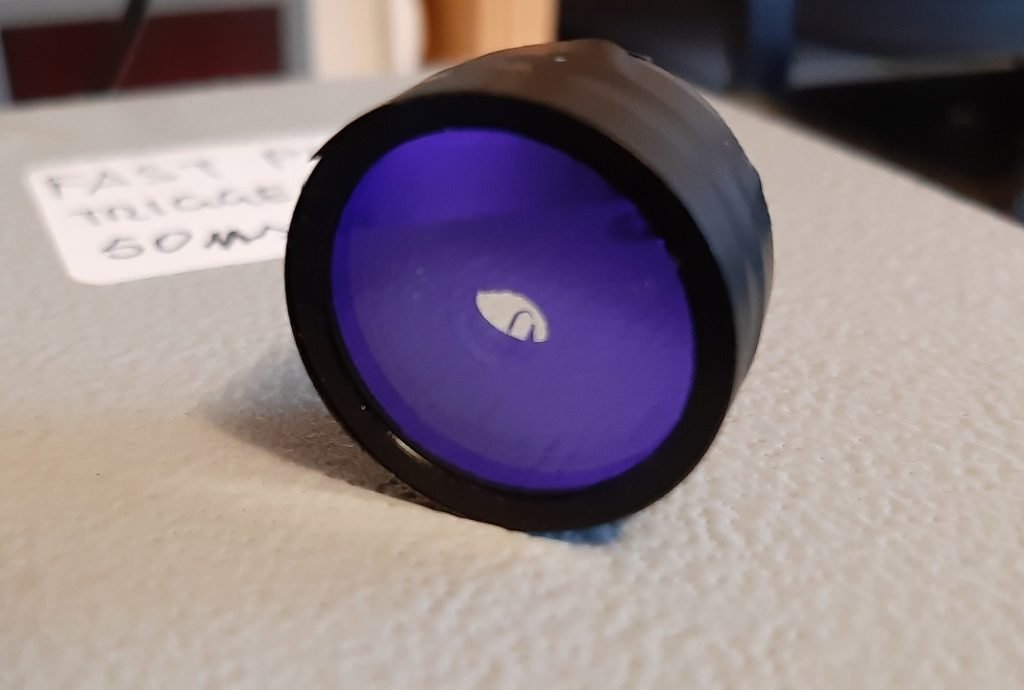 To amplify the photomultiplier signal we opted for an amplifier in trans-impedance configuration described in the post Trans-Impedance Amplifier. The circuit uses the LTC6268 op amp suitable for this type of application. In order to faithfully follow the trend of the light pulse, the amplifier must be very fast. The image below shows the card in “breakboard” format ready for use. 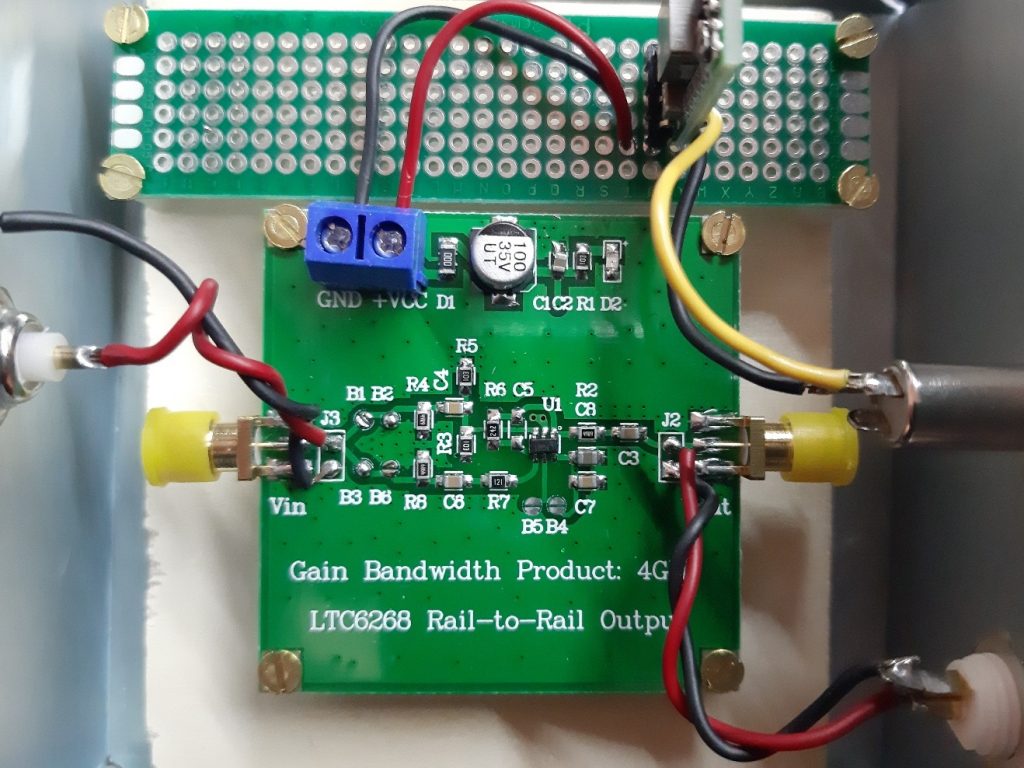 The signal produced by the amplifier is displayed and acquired by the oscilloscope. The trace shown below as an example shows, in blue, the fluorescence pulse with its exponential decay and in yellow the driving current pulse of the LED. 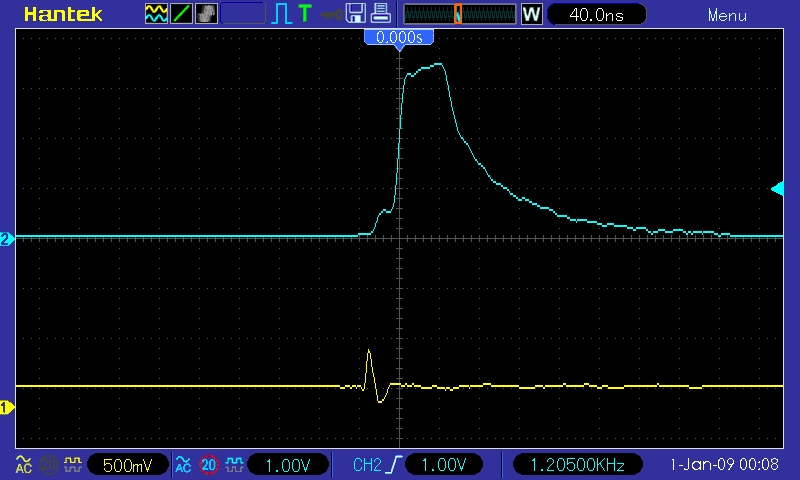 The time-resolved fluorescence analysis is of great importance in many scientific fields but it is rather difficult to perform in an amateur laboratory due to the extremely short time of the physical process. In this project we have shown that the use of an LED driven with a “fast pulser” circuit and a photomultiplier allows the measurement of the fluorescence decay time in cases where the decay time is greater than 10-20 nanoseconds.