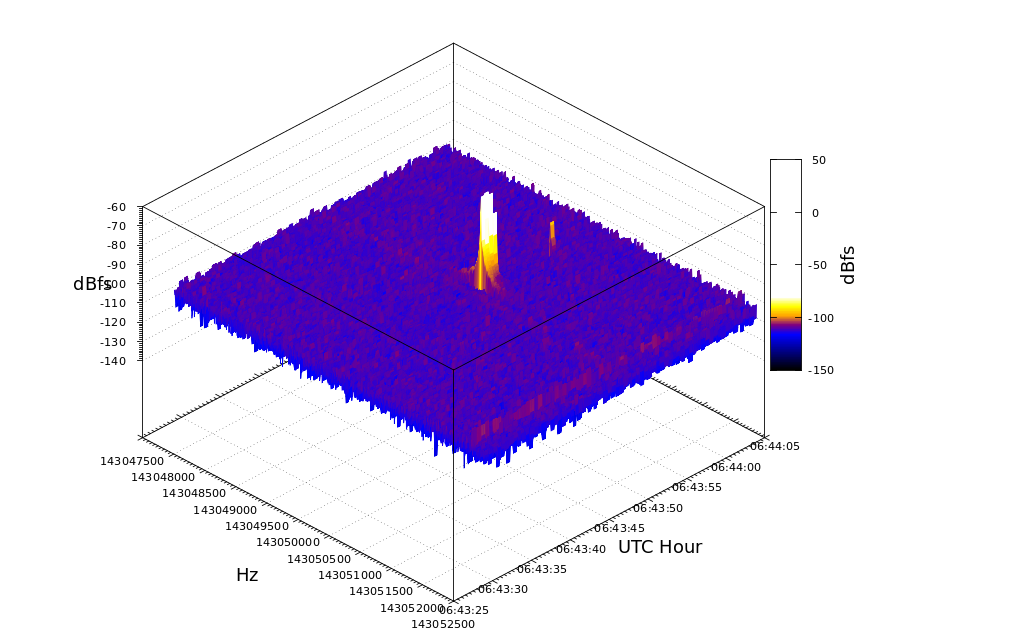 Abstract : in this post we want to present some results obtained with our meteoric scattering radio reception system (Meteor RF Scattering Receiving System). We aimed the antenna in the direction of the Graves radar at an angle of about 50 ° and collected the data for a few days. The period of this observation does not coincide with peaks of meteor showers so we focused above all on the characteristics of the events rather than on their number.

We used the open software Echoes from gmbertani. Echoes it’s a radio spectral analysis software for RTL-SDR devices, designed for meteor scattering purposes. Its main goal is to analyze and record the total power of natural signals and generate screenshots and tabular data (CSV, GNUplot) output in presence of particular peaks in a selected narrow range of frequencies.

Below you can see the GUI of the program. 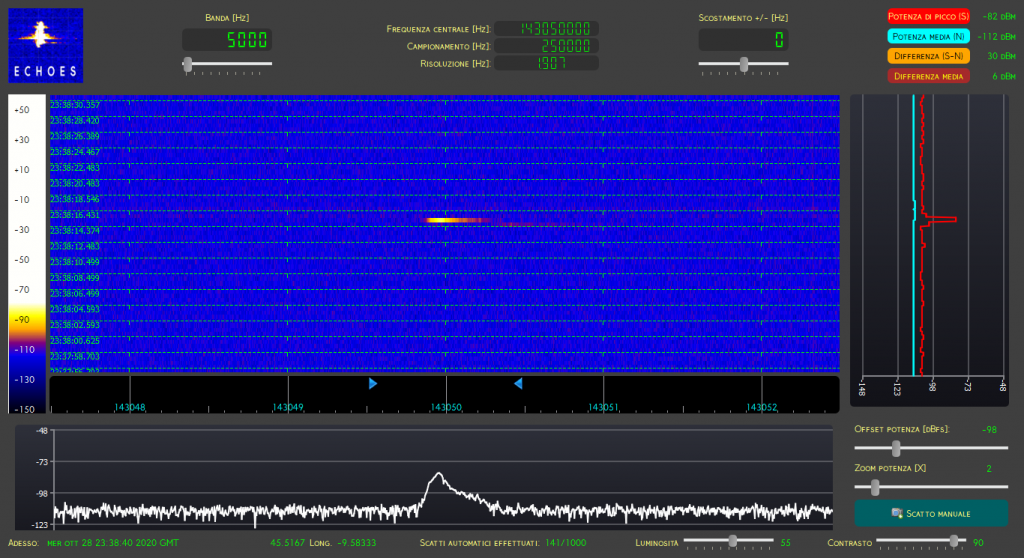 Every day a very high number of small rocky and/or metal fragments (meteoroids and dust) from interplanetary space enter the earth’s atmosphere at hypersonic speeds, ranging between 11 and 72 km/s. This leads them to violently collide with the molecules and atoms that make up the upper part of the earth’s atmosphere.
At such speeds, every single collision of an atmospheric molecule with the meteoroid releases on average an energy of the order of one hundred Joules, sufficient to ionize and excite the meteoric and atmospheric atoms. As the meteoroid passes through increasingly dense areas of the Earth’s atmosphere, its surface temperature can reach several thousand degrees. This causes it to melt and evaporate. This phenomenon, called ablation, rapidly leads to the partial or complete destruction of the meteoroid. The resulting transient light emission takes the generic name of meteor. The presence of a trail of ionized atoms and free electrons makes this phenomenon detectable and analysable through radar techniques, as we have illustrated in the previous post Meteor RF Scattering Receiving System.

The number of meteors entering the Earth’s atmosphere is not constant throughout the day. Due to the earth revolution around the sun and its rotational motion (counterclockwise when viewed from the North pole) the conditions of greatest impact probability occur from midnight until dawn, as explained in the following diagram.

Even during the year the number of meteors does not remain constant but shows peaks corresponding to the so-called meteor showers. These occur when the earth, during its orbit, passes through cometary orbits rich in dust and fragments. The table below shows the main meteor showers that occur during the year. 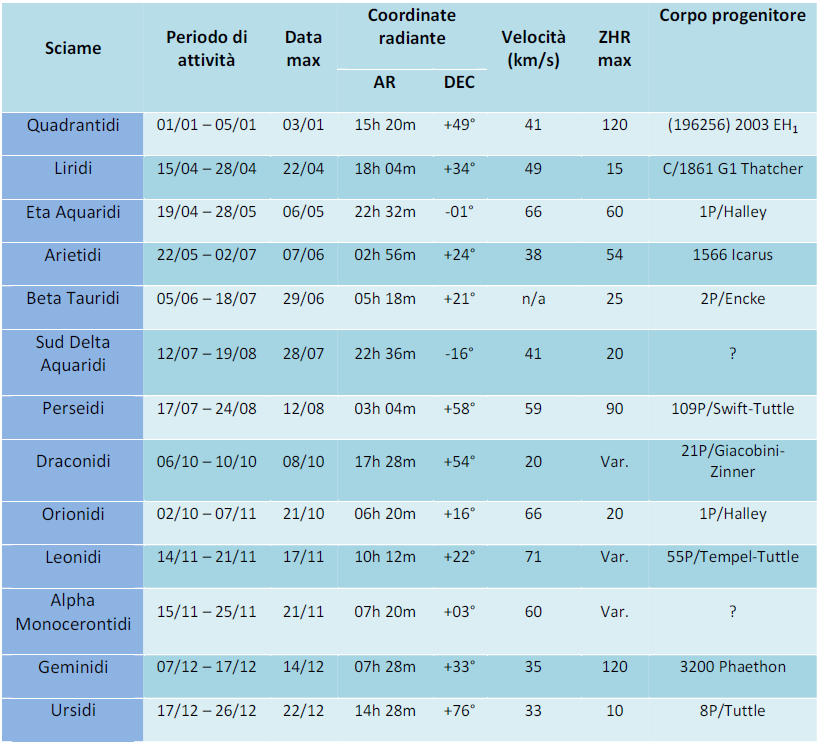 The radio detection of the meteors is based on the reception of the reflection of the signal sent by the transmitter by the meteor trail. When the radio wave sent by the transmitter hits the ionized meteoric trail, the charged particles of the trail oscillate under the influence of the electric field of the incident wave, due to this oscillation these particles re-radiate the electromagnetic wave. The electromagnetic re-emission process is mainly due to free electrons. From the point of view of radar reflection, meteor trails can be divided into two “categories”: underdense trails and overdense trails.

Underdense meteors correspond to faint meteors. Underdense trails are characterized by a relatively low free electron density. In this case, the radio wave can penetrate inside the wake and is diffused by the individual electrons. The radio echo from an underdense trail is characterized by a rapid rising edge and a fast exponential decay of the signal due to the rapid dissolution of the ionized trail. The signal has a total duration of fractions of a second. However, our software does not have sufficient time resolution to highlight the exponential decay of the signal: the underdense metora will therefore have a minimum duration and will be displayed in the waterfall graph as a point or a bright horizontal line, the power graph will have a peak of rectangular shape, as shown in the following images. 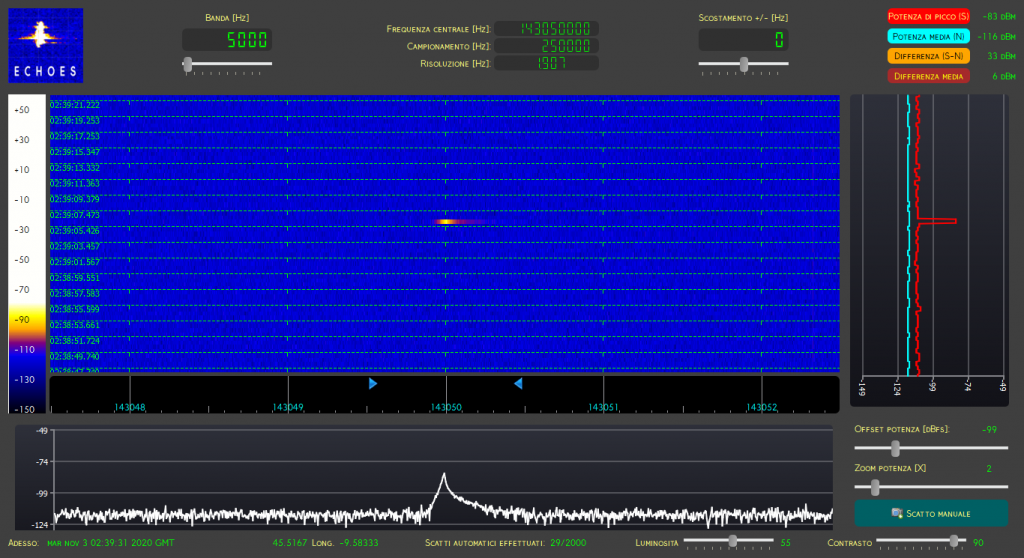 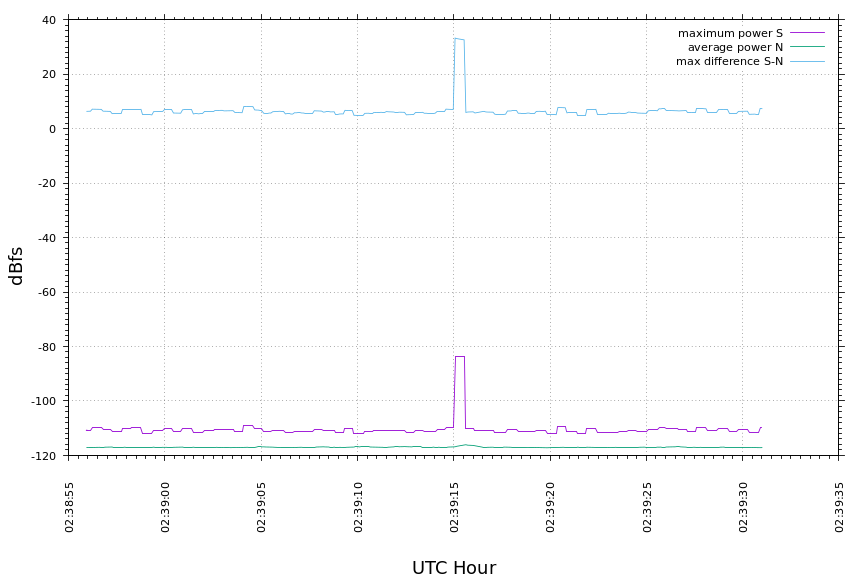 When the density of free electrons present in the meteor trail exceeds a certain threshold, it is called a overdense trail. Overdense trails correspond to the brightest meteors visible in the sky. In a overdense trail the free electrons form a sort of plasma and the radio waves are reflected from the surface of the ionized trail. The radio echo received from a overdense wake generally has higher power than a underdense one and can last several seconds.
During this time interval the signal strength can undergo irregular variations and modulations due to the movements of the wake due to high altitude winds and also due to interference phenomena (Fresnel oscillations). The overdense meteor will therefore produce a radio echo with a duration generally greater than 1 sec. and it will be displayed in the waterfall chart as a bright vertical line, as shown in the following images. 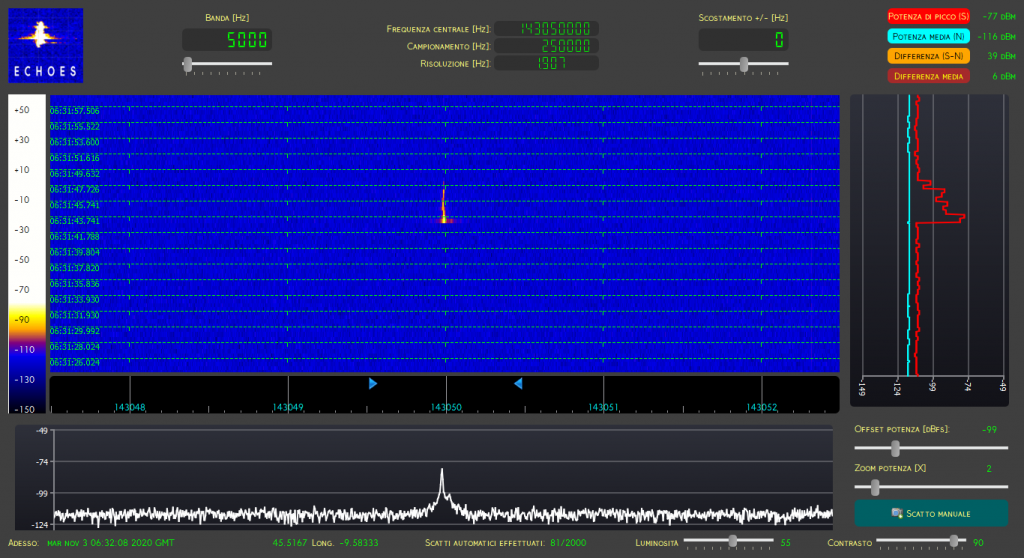 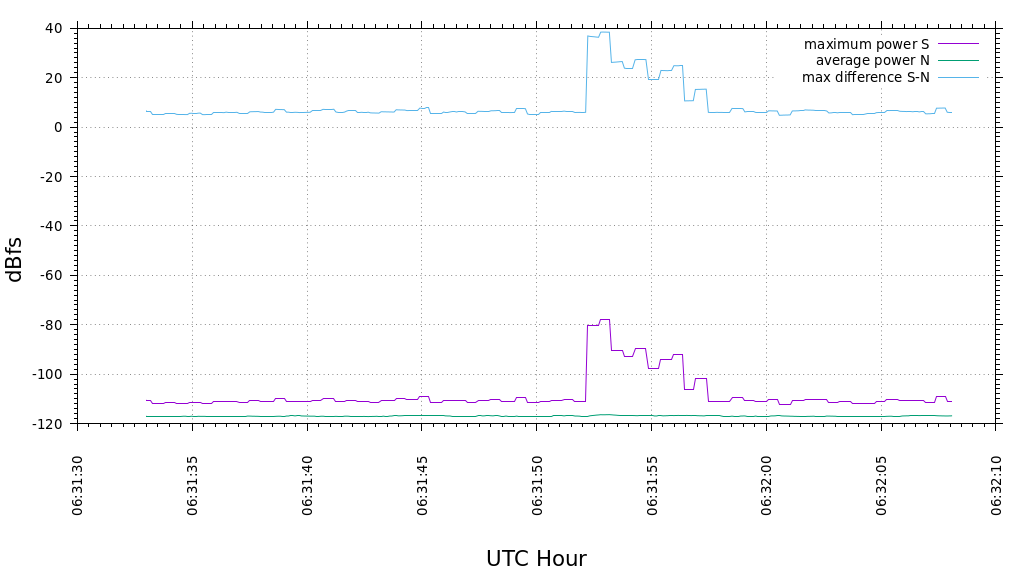 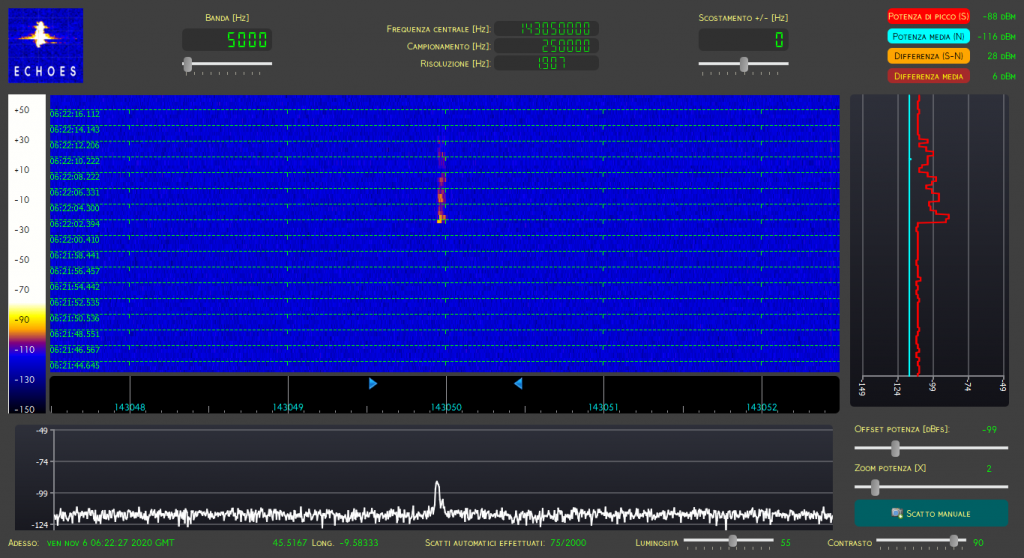 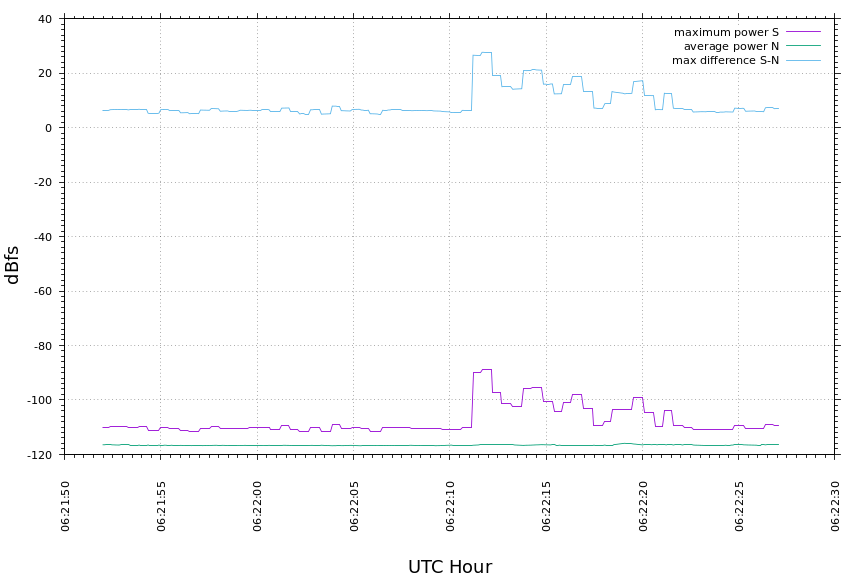 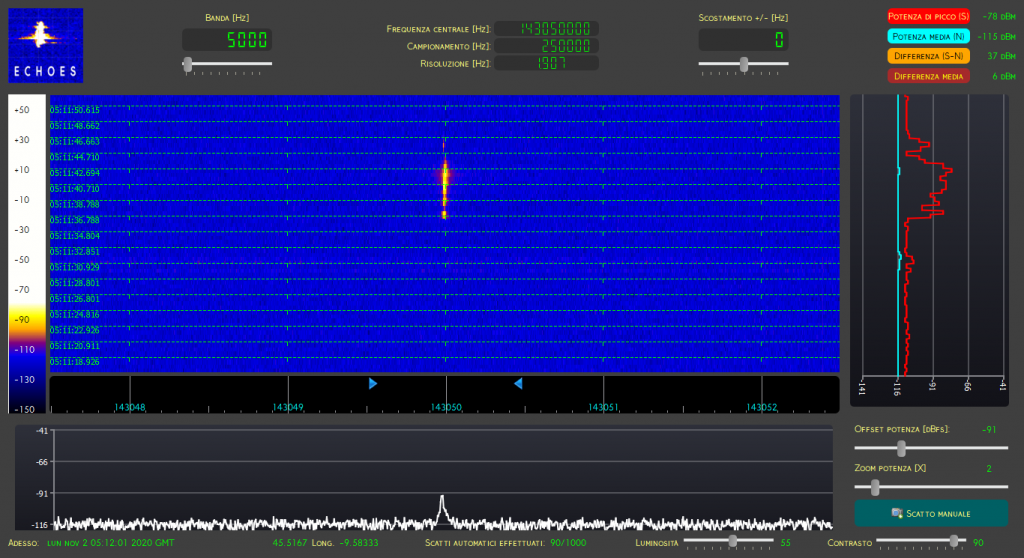 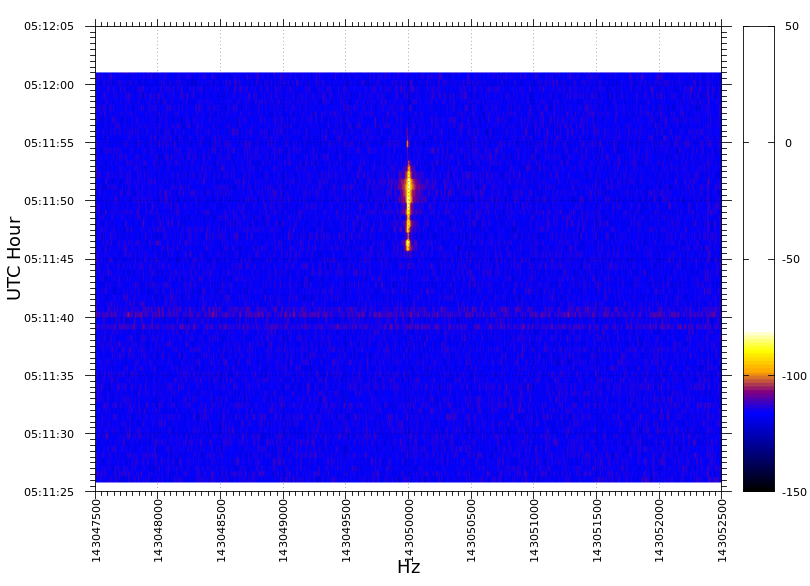 Since the radio reflection, in most cases, is not caused by the meteor itself but by its ionized trace, the reflection point of the radio wave appears static with respect to the transmitter and the receiver. This results in a reflection at the same frequency as the transmitted wave, that is 143.050 MHz. In reality, however, we are witnessing a frequency spectrum more or less displaced with respect to the carrier, with values ​​ranging from 100 Hz to 1000 Hz, as shown in the following images. These values ​​of Δf correspond to speeds of about 100 – 1000 m/s (from the Doppler effect: V=Δf*λ). These effects are explained by the movements of the wake (translation and overturning) caused by high altitude winds. 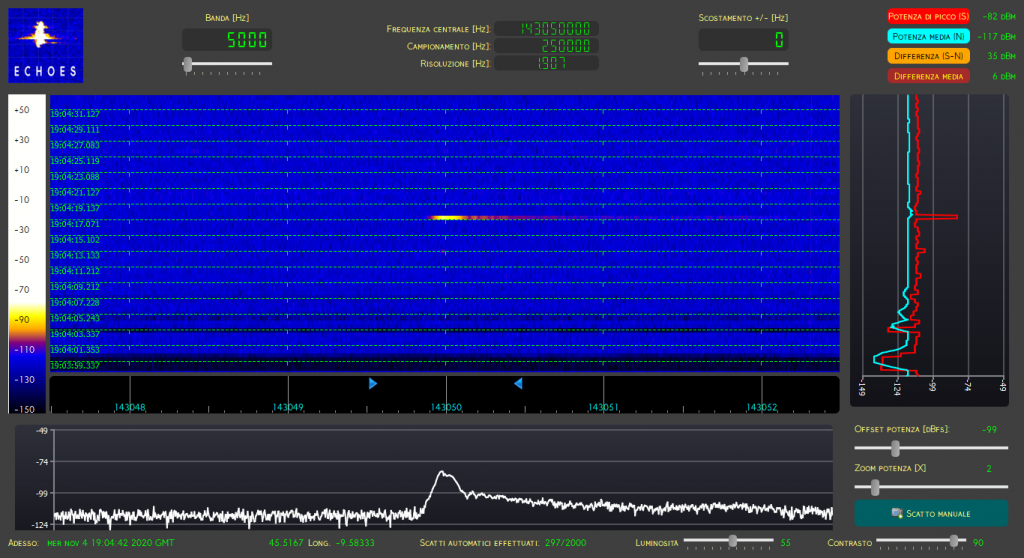 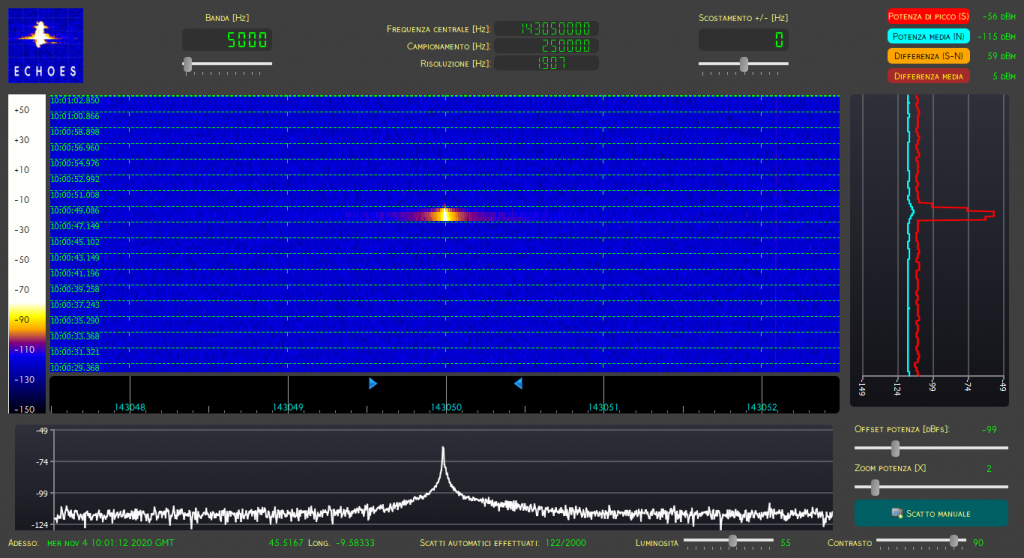 The results obtained are very positive. Although the antenna is self-built it behaves “very well”, the amplification and filtration chain provides the SDR device with a good signal. The Echoes software allows us to automatically acquire all meteoric events and produce excellent reports in formats that can be easily handled with other data analysis programs. The next step will be the acquisition of data during a relevant meteor shower in order to evaluate the number of events according to the time and day of observation.