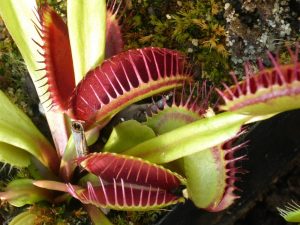 In physiology, an action potential occurs when the membrane potential of a specific cell location rapidly rises and falls : this depolarization then causes adjacent locations to similarly depolarize. Action potentials occur in several types of animal cells, called excitable cells, which include neurons, muscle cells, endocrine cells, glomus cells, and in some plant cells. (from Wikipedia)

Although plants don’t have nerves, plants cells are capable of generating electrical impulses called action potentials, just as nerve cells in animals do. In fact, all biological cells are electrical.
Cells use membranes to keep their interiors separate from their exteriors. Some very tiny molecules can infiltrate the membranes, but most molecules must pass through pores or channels found within the membrane. One group of migratory molecules is the ion family : charged particles like sodium, potassium, chloride and calcium.
Whenever different concentrations of ions accumulate on opposite sides of a cell membrane, there exists the potential for an electrical current. Cells manage this electric potential using protein channels and pumps embedded in the cell membrane—gatekeepers that regulate the flow of charged particles across the cell membrane. The controlled flow of ions in and out of a cell constitutes electrical signaling in both plants and animals.

In most plants, what those signals are for is still an open question. The notable exceptions to this mystery are plants that rely on electric signals for rapid movement, like the carnivorous Venus flytrap or Mimosa pudica — a plant whose leaves fold up when brushed to discourage herbivore. (from Scientific American)

With our Biosignal Amplifier we tried to measure the action potential in these two plants.

In the field of biosignals, electrodes are fundamental. In living organisms, such as cells or tissues, electrical conduction occurs through the movement of ions, while in the used circuits it occurs, as we know, through the movement of conduction electrons. To collect the weak electrical signals generated by living organisms, it is necessary to take into account this different mode of conduction in order to maximize the signal and minimize noise.

The Ag/AgCl electrodes integrated with conductive gel containing chloride ions (Cl–) are widely used. The normal electrodes used for the electrocardiogram, however, are not suitable to be used on plants. For this reason we have prepared, with a simple method, special electrodes, shown in the following figure.
The common reference electrode is a simple syringe needle to which a wire is welded. The active electrodes are made with a thin silver wire (Ag) on ​​which a patina of Silver Chloride (AgCl) has been deposited. The AgCl layer was formed by soaking for about 30 min. the electrodes in a sodium hypochlorite solution (normal bleach). The AgCl layer is easily recognized because it is darker. The electrodes were then inserted into plastic tubes and soldered to a wire. 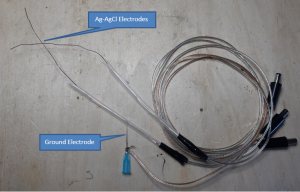 The Venus flytrap (Dionaea muscipula) is a carnivorous plant native to subtropical wetlands on the East Coast of the United States in North Carolina and South Carolina. It catches its prey — chiefly insects and arachnids — with a trapping structure formed by the terminal portion of each of the plant’s leaves, which is triggered by tiny hairs (called “trigger hairs” or “sensitive hairs”) on their inner surfaces.

The Venus flytrap is one of a very small group of plants capable of rapid movement, such as Mimosa pudica, the Telegraph plant, sundews and bladderworts.

The mechanism by which the trap snaps shut involves a complex interaction between elasticity, turgor and growth. The trap only shuts when there have been two stimulations of the trigger hairs; this is to avoid inadvertent triggering of the mechanism by dust and other wind-borne debris. In the open, untripped state, the lobes are convex (bent outwards), but in the closed state, the lobes are concave (forming a cavity). It is the rapid flipping of this bistable state that closes the trap, but the mechanism by which this occurs is still poorly understood. When the trigger hairs are stimulated, an action potential (mostly involving calcium ions—see calcium in biology) is generated, which propagates across the lobes and stimulates cells in the lobes and in the midrib between them.

Flytraps show a clear example of memory in plants, the plant knows if its hair has been touched, and remembers that for a few seconds. The plant then recalls that incident if a second touch happens during that time frame, and closes. After closing, the flytrap counts additional stimulations of the trigger hairs, to five total, to start the production of digesting enzymes. (from Wikipedia)

The following drawing shows the characteristics of the Dionea leaf. 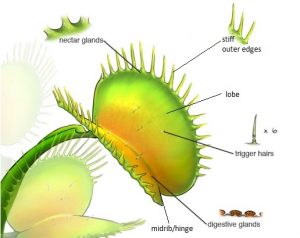 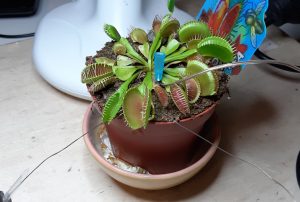 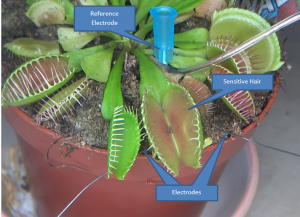 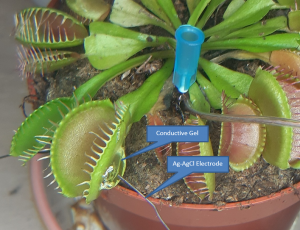 With our amplifier and the electrodes described above we have acquired some action potential pulses produced by Dionea. It is sufficient to lightly touch the internal trigger hairs to obtain a very evident impulse, lasting less than a second, with rather steep fronts and a slow decay, as can be seen in the following layout. 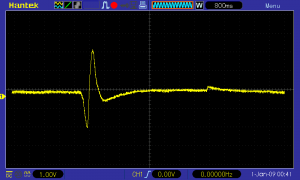 For an off-line analysis we also acquired the signal with our Raspberry RasPI ADC Logger. The results are satisfactory and are shown in the following graph. 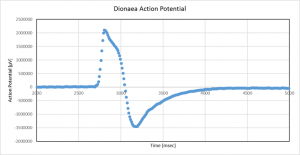 Analyzing in detail the section of the curve that corresponds to the trend towards zero we can see that it is fitted quite well by an exponential trend, very similar to the discharge trend of a capacitor in an RC circuit.

The sensitive mimosa pudica is another plant that has the characteristic of being able to quickly contract its leaves in response to an external tactile stimulus, also causing a lowering of the thinner branches. This movement is called tigmonastia.

The evening and nocturnal movements of the leaves are known as nocturia, and are a well-described example of a circadian plant rhythm regulated by light. The change in angle of the leaves is caused by the change in cellular turgor of the pulvinus, a specialized structure at the base of the stalk; in practice a mechanism caused by osmosis. The diffusion of K+ ions causes the internal solution to be hypertonic with respect to the external one and thus produces a cellular turgor. Depending on whether it takes place in the flexor or extensor cells, the leaf fins open or close.

The mechanism is optimal as a defense against predators which, when the leaves fold up, will find themselves in front of an apparently rotten plant, but it is also functional to limiting the loss of useful liquids during the hours of excessive heat or to protect themselves from the wind by reducing the surface exposed.
The following drawing shows the structure of the plant (from Backyard Brains). 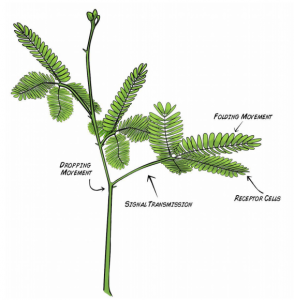 In the images below our seedlings … 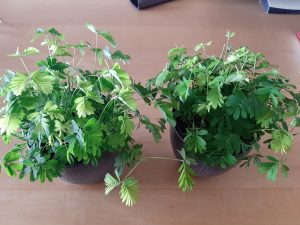 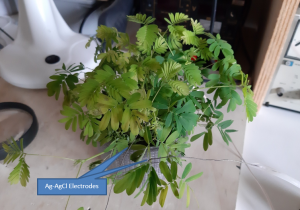 The response of the plant to a tactile stimulus is modulated according to the size of the stimulus : the leaves are closed at a light touch, while the twig bends at a more energetic stimulus.

The positioning of our electrodes at the base of the stem and near the leaves has allowed us to acquire some pulses originated in response to the tactile stimulus on the leaves. The tracks below are two examples. Generally there is an impulse or a steep front followed by a slow decrease in exponential trend. 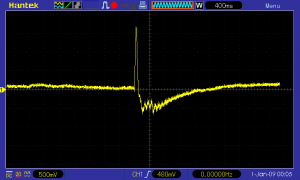 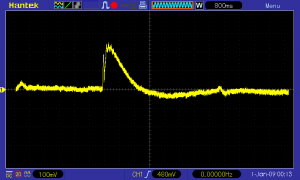