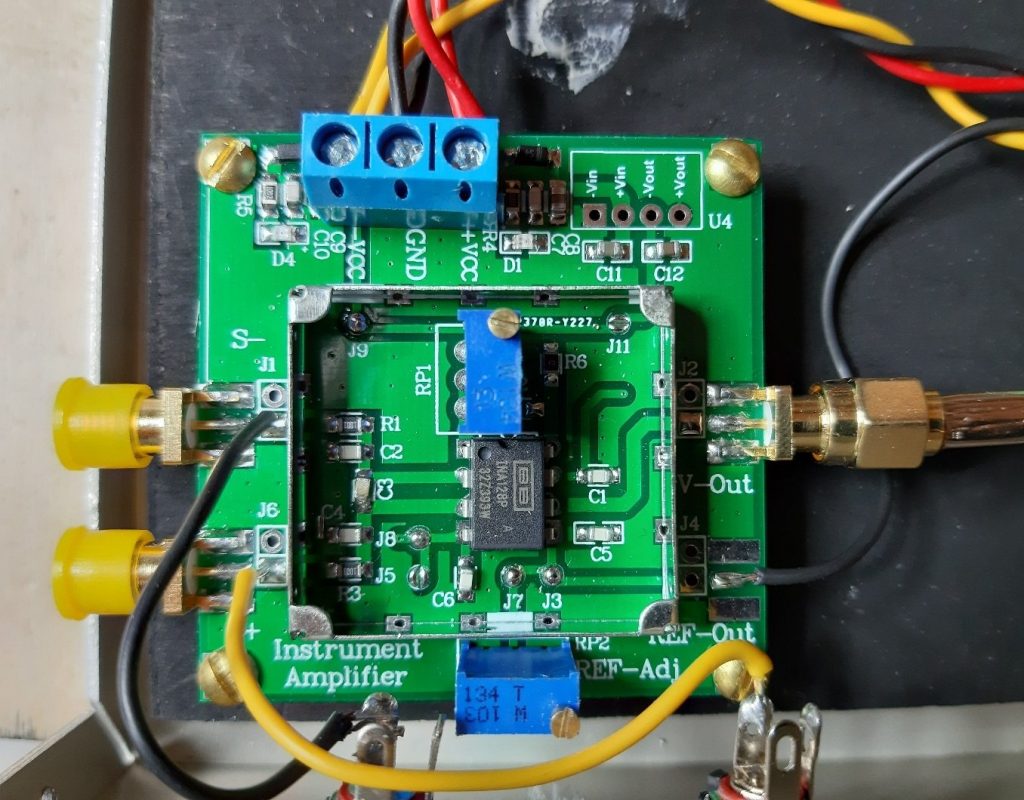 Abstract : in this post we want to illustrate the construction of a biosignal amplifier based on the INA128 chip which integrates an instrumentation amplifier inside. The detection of biosignals, with their low “signal to noise” ratio, presents characteristic aspects that require careful use of electronics. We based ourselves on an instrumentation amplifier followed by a band-pass filter to eliminate LF and HF disturbances, downstream we inserted a notch filter in a “double-T” configuration to eliminate the omnipresent component at 50 Hz The system is completed by an envelope detector for the overall trend of the higher frequency signals.

The electrical signal deriving from biological activity is characterized by very low voltage values, just above the noise level, and spread over a frequency band that extends from fractions of Hz to a few hundred Hz. The amplifiers used for these applications represent an interesting challenge for designers and, at the same time, are of particular importance due to applications in the medical sector.
We at PhysicsOpenLab also wanted to “try” in the design and construction of a biosignal amplifier to be used for electrocardiography and electromyography applications.

The first component of our equipment is an instrumentation amplifier. It is an operational amplifier particularly suitable for amplifying weak signals from transducers in the field of electronic measurements and professional instruments.
Its structure is derived from the differential amplifier : compared to this it has two more operational amp. that improve (increasing) the input impedance and allow you to vary the amplification of the differential input signal Vin by varying only one Rgain component. The image below shows the basic scheme for the component that we used : INA128. 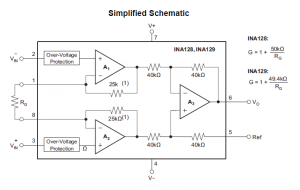 To use the INA128 module it is convenient to use ready-boards, such as the one shown below and in the cover image (they are easily found on eBay). These boards complete the module with additional components such as the trimmer to vary the gain, the filtering part of the input signals and the section for filtering the power lines. 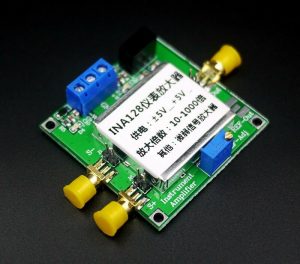 The signal produced by the INA128 first stage is subsequently filtered and amplified by a stage that provides fixed gain G=10, high pass cut frequency at 0.1 Hz and low pass at 160 Hz. This eliminates any DC component present in the signal and high frequency noise is also eliminated. However, 50 Hz noise due to couplings with the domestic power line may be present inside the pass band, for this reason we have also included a notch filter to reduce the omnipresent noise at 50 Hz.

The output from the notch filter is the output signal and can be viewed with the oscilloscope or be acquired with a data logger. However, for high frequency signals – such as those recorded in an electromyography – it may also be useful to have an envelope detector. This allows us to have the overall signal trend as shown in the image below.

The envelope detector consists in practice of a full-wave rectifier followed by a low-pass filter with the function of integrator, according to the diagram below.

The power supply of the modules is obtained with a pair of 9V batteries, followed by 5V regulators. The connection of the two regulators allows you to have a floating reference (GND), with respect to which you have the + 5V and -5V lines. 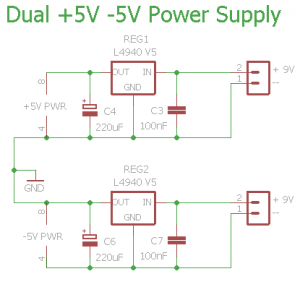 All modules were placed in an aluminum box, connected to the ground potential. In the image below you can see the instrumentation amplifier, bottom left, the power supply module with batteries, top left and, on the right, the OP AMP EVM PDIP board (breadboard for operational amplifiers) on which are made all the other modules. 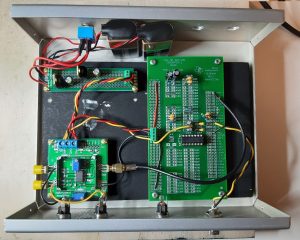 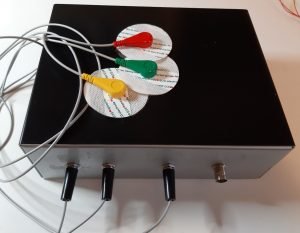 The gain of the amplifier must be adjusted so as to have a signal not higher than 1 volt, so as not to have the problem of possible saturation by the amplifier. The images below show a typical ECG trace. 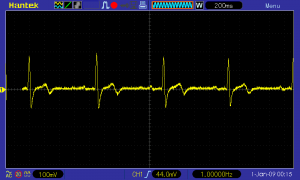