Comparison between Geophone and Seismometer

The three geophones we used for the construction of the Geophonic Seismometer are very sensitive instruments. Their natural frequency (mechanical resonance frequency) is about 4.5 Hz. At frequencies lower than 1 Hz the response is very attenuated, while it remains fairly constant even at higher frequencies. The signal produced by the seismometers is sampled by the ADC converter at a rate of 50 Hz, it follows that the useful frequency band of our apparatus goes from about 1 Hz up to 25 Hz.

The Horizontal Pendulum Seismometer instead works on much lower frequencies : its natural frequency is about 0.25 Hz (period of 4 seconds), at higher frequencies its response drops quickly. The electronic part of amplification and filtering of the signal also eliminates the components with a frequency lower than 0.05 Hz and greater than 10 Hz. The useful band therefore goes from 0.05 Hz to 10 Hz. 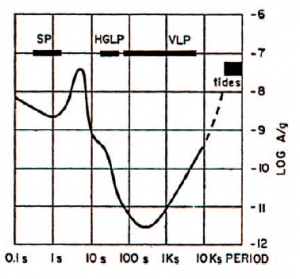 The two instruments are therefore complementary : the geophone responds better to high frequencies, while the seismometer is more sensitive to low frequencies. The different frequency response also makes the behavior of the two instruments different with respect to disturbances : the geophone is rather sensitive to anthropogenic noises such as vibrations induced by traffic or by people, while the seismometer easily detects also natural low frequency oscillations induced by atmospheric phenomena and wave motion in the oceans.
The graph on the side shows the trend of natural seismic noise as a function of the period. We see that there is a peak around the period of about 8 seconds, while there is a minimum on the frequency of 1 Hz and for values ​​below 0.1 Hz.

Even seismic phenomena have a different “harmonic” content from one another, depending on the origin, intensity and physics of propagation of seismic waves. In a coarse way we can say that in low intensity earthquakes, originating from “small” faults, high frequencies predominate while in the strongest earthquakes (> 5M), originated from faults long tens and tens of kilometers, oscillations with lower frequencies than 1 Hz  are predominant and the “slow” surface waves are more present, which, among other things, attenuate more slowly than volume waves.

Geophones can detect even very weak earthquakes if they occur near the seismic station. Below you can see the detection of an M1.0 intensity earthquake occurred about 10 km away. The three traces of the geophones (Z, N-S, E-W) show very well the arrival of seismic waves and allow us to assess the extent of ground displacements along the three directions.

With a more detailed examination of the seismic traces we can distinguish the P waves (the first part) and the subsequent S waves of lower frequency. From the difference in arrival times, estimated at around 1.8 s, the distance of the hypocenter can be calculated: about 10 km.

The one shown below is the detection of a weak earthquake, intensity 1.4M, which occurred at about 44 Km. In this case the signal is weaker due to the greater distance. The event was however correctly detected by the three geophones and it is noted that the major signal comes from the geophone oriented according to the N-S axis. 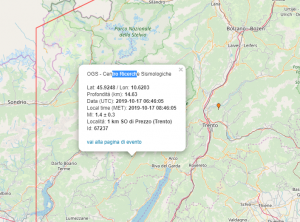 The one shown below is the detection of a regional earthquake of 3.9M intensity, therefore of medium-low intensity, occurring at a distance of about 200 km. Recording with geophones is very clear and this allows us to make some “quantitative” evaluations represented in the diagrams below.

The image below shows the earthquake spectrogram, in which it is evident the different moments of arrival of P waves and S waves.

The diagrams below show the arrival times of P waves and S waves according to the speed model of seismic waves and the distance of the earthquake determined through the travel time curves. 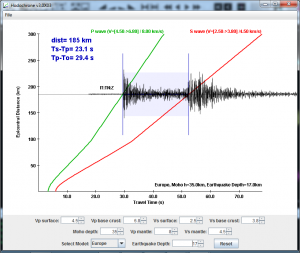 The one shown below is the detection of a regional earthquake of 3.3M intensity, therefore of medium-low intensity, occurring at about 150 km away. Also in this case the recording by geophones is very clear.

The diagrams below show the arrival times of P waves and S waves according to the speed model of seismic waves and the distance of the earthquake determined through the travel time (dromocrone) curves. 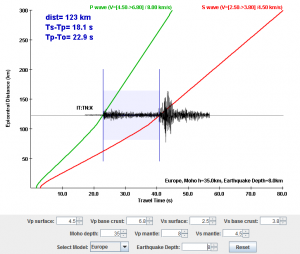 Below we report the detection of a strong 6.3M earthquake that occurred almost at the antipodes with respect to Italy.

The distance with the epicenter is 16408 Km. Given the distance and the intensity of the earthquake, what we mainly note are low-frequency surface waves. In fact the tracing produced by the seismometer, more sensitive to low frequencies, clearly shows the trace of the earthquake.

This quake at the Vanuatu Islands was rather violent, in fact it was also recorded by geophones that, although not very sensitive to the low frequencies typical of remote and intense earthquakes, produced seismic traces with the precise indication of the telluric upheaval, as seen in the tracks below.