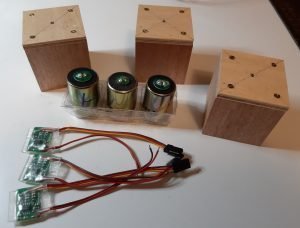 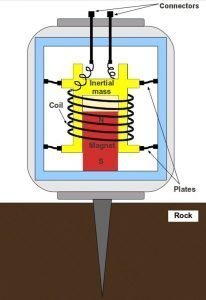 In a series of previous posts we have described a horizontal pendulum seismometer:

The one described above is a seismometer with a medium-long period (about 5 sec) suitable for the detection especially of remote earthquakes (telesisms). Neighboring – and weak – earthquakes are not detected because in the latter the presence of higher frequencies (1 – 5 Hz) is predominant to which the instrument is less sensitive.

For the detection of local earthquakes it is advisable to use instruments with a higher frequency range, for example geophones.

The geophone, of which above we see a basic scheme, is a sensor capable of picking up the waves that propagate in the ground. The geophone used in geophysics is a sensor designed to detect ground movements or seismic waves. The sensitive element is similar to a microphone, with a coil free to move around a permanent magnet, the coil is integral with an inertial mass, in turn anchored to the structure by means of springs. This instrument is very sensitive and is able to detect very low frequencies, even of a few Hertz. The movement of the coil is transformed into an electrical signal, available on the external connectors.

The geophones we used have the frequency range centered on 4.5 Hz. We used three: one vertical and two horizontal, arranged according to the three spatial directions: vertical, horizontal N-S, horizontal E-W.

The signal produced by the geophone must be amplified and “conditioned” before sending it to an Analog – Digital converter for acquisition. The solution we have adopted is based on the excellent preamplifier proposed by the Theremino team. The diagram is shown below. It is a cascade of two amplifiers based on the low-noise operational LT6014. The first stage provides an adjustable gain through the choice of the external resistor. The second stage brings the signal to the value of 1.65 V, gives an additional fixed gain and brings the bandwidth in the range 0.2 – 180 Hz. Depending on the external resistor the gain can vary from 100 to 10000. 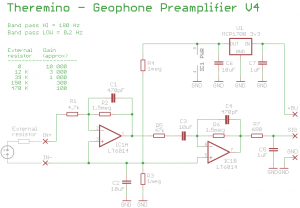 The signal produced by the geophones can also be acquired by directly connecting the geophones to a 24-bit ADC, in this way the gain, and also other operating parameters, can be regulated via software. The ADC converter is then connected to the Master Theremino board, this solution is described in this page.
We have adopted the solution with the preamplifier to be able to use the signal acquisition chain already used with the pendulum seismometer (PSoC + RasPI, see post Seismometer : Read-out Electronics).

To be able to acquire the signals coming from the geophones and the seismometer signal it was necessary to use a multiplexer (configured via software). The sampling rate of the conversion was also increased to 50 Hz. The diagram below shows the ADC component (Delta-Sigma) and the multiplexer connected to the four input channels. 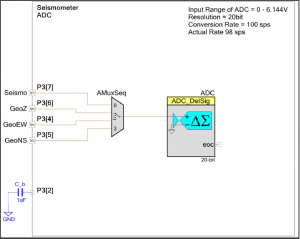 Geophones and preamps have been placed inside a metal box equipped with connectors for the three signals and for power supply. Die-cast aluminum metal boxes are easily found and are suitable for our purpose: they constitute a robust container and act as a shield against electromagnetic disturbances. The image below shows our geophone seismometer. 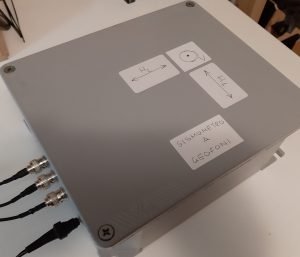 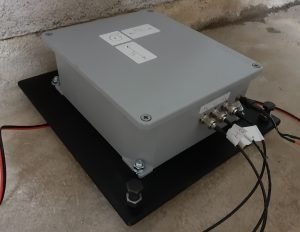 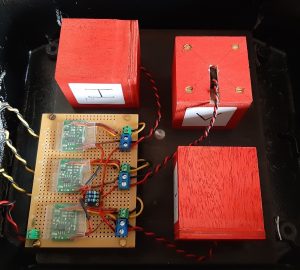 Note that the external resistors for the gain of the preamplifiers are located on an IC socket : in this way it is very easy to replace them to increase or decrease the gain. For seismometric applications the gain is in the 100 – 1000 range, also depending on the “noise” of the site where the seismometer is placed. To use very high gains (> 1000) it is necessary that the anthropic noise is very low.
In our tool we have adopted the following values :
Vertical Channel : Rext = 56K : Gain = 717
Horizontal Channels : Rext = 150K : Gain = 310

Using the acquisition software already developed for the pendulum seismometer, we are able to acquire the data produced by the geophones and record the seismic plots. The geophones are very sensitive in the frequency range 1 – 10 Hz, in this range there are also many artificial sources : motor vehicle traffic, passing trains, passing people, etc … for this reason it is necessary to place the seismometer in a place as quiet as possible, for example in a cellar. Even so, however, a typical path will contain many disturbances and recordings of non-seismic events. An example is shown in the following image. 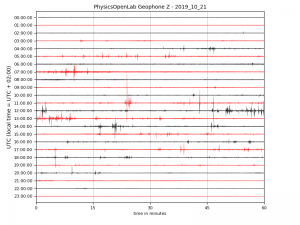 As a counter-example we report below a path with a seismic event : it is a rather weak earthquake recorded after 23:30. As can be seen, the trend is very different from disturbances and anthropic noise : there is an initial peak followed by a typical decreasing trend. 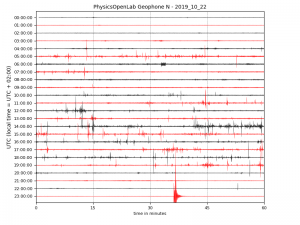 The real-time recordings of the seismometer and geophones can be found on the following page : Seismic Monitoring