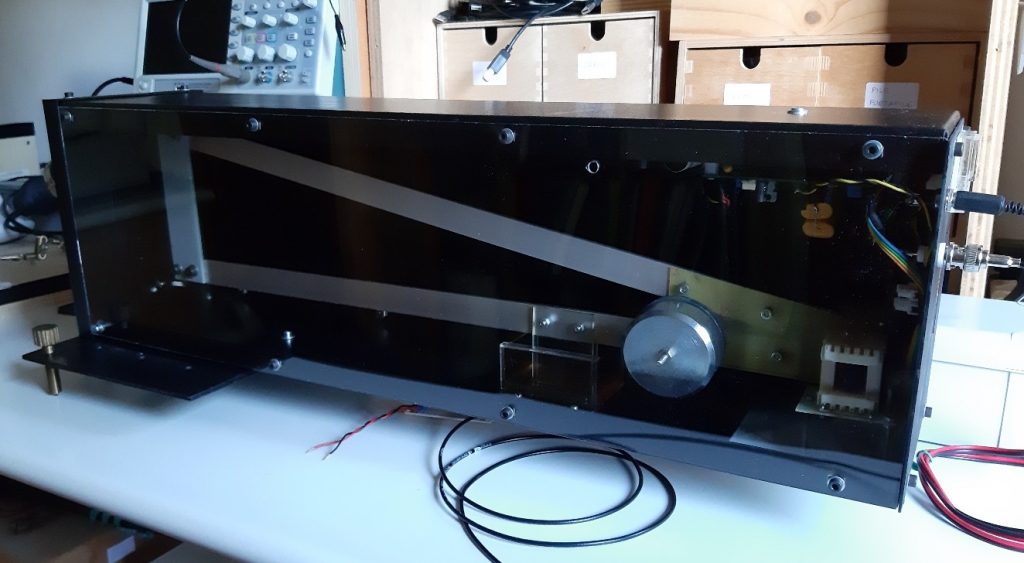 The seismometer is a fascinating tool that allows us to “closely” study the geophysics of the earth’s crust. As we know, the earth’s crust is subject to earthquakes which are nothing but vibrations of the rock layers that make up the lithosphere, produced by internal movements that occur underground. The displacement of the internal masses causes vibrations in the whole surrounding area that propagate in the form of seismic waves. The vibrations are nothing more than the release of the elastic energy accumulated during the deformation that is released suddenly causing the earthquake.
The source of the earthquake is called hypocenter and its vertical projection on the surface is called epicenter. The greatest damage usually occurs in the area of ​​the epicenter, the destructive effects do not depend only on the intensity of the shock but also on the type of terrain.

Seismic waves are detected and measured with the seismograph (or seismometer).

The seismograph is the instrument used to record seismic phenomena. The recording is called seismogram and is the representation of the vertical or horizontal oscillation of the ground caused by the seismic event. They can be very simple like pendulums with suspended masses connected to writing systems on paper or very sophisticated with accelerometers and geophones connected to amplifiers and ADC converters.
Depending on the type of sensor and technology we can divide the seismographs into:

Building a seismometer is not a simple task, it takes a lot of patience and a lot of time. In this article we will try to illustrate the seismometer we built in our laboratory.

Our seismometer is based on the projects of the italian magazine “Nuova Elettronica” (several years ago), the structure is based on a horizontal seismometer, but the original project has undergone many changes.

The Lehman type seismometer has been designed to detect horizontal ground vibrations due to seismic events. Due to its peculiarities it is one of the most used tools by amateurs thanks to a relatively simple construction and a sufficiently extended frequency response to be able to reveal both local and remore seismic events.
The operation is based on the property of the instrument to keep the mass, positioned on a nearly horizontal arm, in correspondence with a transversal movement of the ground, tendentially still. The configuration of this sensor is also called, in English, Garden Gate as it recalls the functioning of a door.
In fact it behaves in a way quite similar to a vertical pendulum, however the resonance frequency of the pendulum, which is a function of the length of the arm, is much lowered in the Lehman configuration thanks to the configuration adopted.
The resonance frequency in a Lehman sensor depends on the length of the arm and the angle of incidence of the structure with respect to the horizontal plane. In order to function properly, in fact, it is important that the almost vertical support on which the hinges are installed is inclined at a certain angle.
An angle that is too large increases the resonance frequency of the instrument and therefore effectively reduces the sensitivity to the lower frequencies that characterize the surface waves of telesisms, while an angle that is too small causes undesired oscillations to occur.

The drawing below shows the diagram of the Lehman seismometer. 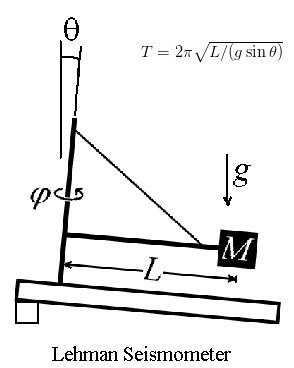 The seismometer is shown in the image below. The movable arm, hinged to the structure on the left wall, consists of a rigid triangular aluminum frame. At the end there is the inertial mass. the movable arm ends with a ferrite rod (ferroxcube) that moves inside two solenoids : the ferrite and the solenoids constitute the position sensor which detects the oscillations of the inertial mass. The whole is positioned inside a sheet metal “box”. The base has a greater thickness than the walls, so as to increase stability and stiffness, and is equipped with three threaded and adjustable “feet”, which have the purpose of leveling the instrument.
The electronics are located inside, on the top of the instrument, the signal and power connectors are on the right side. The front is closed with a Plexiglas window.

One of the most important parts of the seismometer are the hinges that allow the rotation of the movable arm : they must be rigid, stable, ideally free of friction and possibly adjustable. In the original version of the seismometer, the hinges consisted of thin steel sheets fixed both to the structure and to the movable arm. The elasticity of the steel sheets allowed the free rotation of the arm. In our instrument the plates have been replaced by “simple” supports made with pins that rest on the recess made on the surface of a threaded cylinder (or a bolt). This solution allows the adjustment of the inclination of the arm and at the same time ensures a rotation with very low friction. The images below show the detail of the two hinges.

At the free end of the arm there is the inertial mass and the position (or displacement) sensor which has the purpose of detecting the movements of the end of the movable arm itself. The displacement sensor consists of a ferrite rod (ferromagnetic material) integral with the arm and inserted inside two solenoids (one on the right and the other on the left). It is an LVDT type sensor (inductive displacement transducer) that transforms a minimum displacement of the ferrite core into an electrical signal. We will deepen the operation of this sensor in a subsequent post, however this sensor is extremely sensitive and can detect displacements in the order of one hundredth of a millimeter (10 μm). The images below show the detail of the LVDT transducer and inertial mass.

However, the oscillations of our horizontal pendulum must be damped. This is necessary otherwise, given the low friction of the hinges, the oscillations would last several minutes, preventing the correct detection of seismic waves. There are many movement damping techniques, we have adopted the simplest one which consists in immersing a fin, integral with the movable arm, in a tray filled with lubricating oil (motor oil). The friction that is produced in the viscous fluid during movement acts by effectively damping the oscillations. The image below shows the detail of the hydraulic damper. 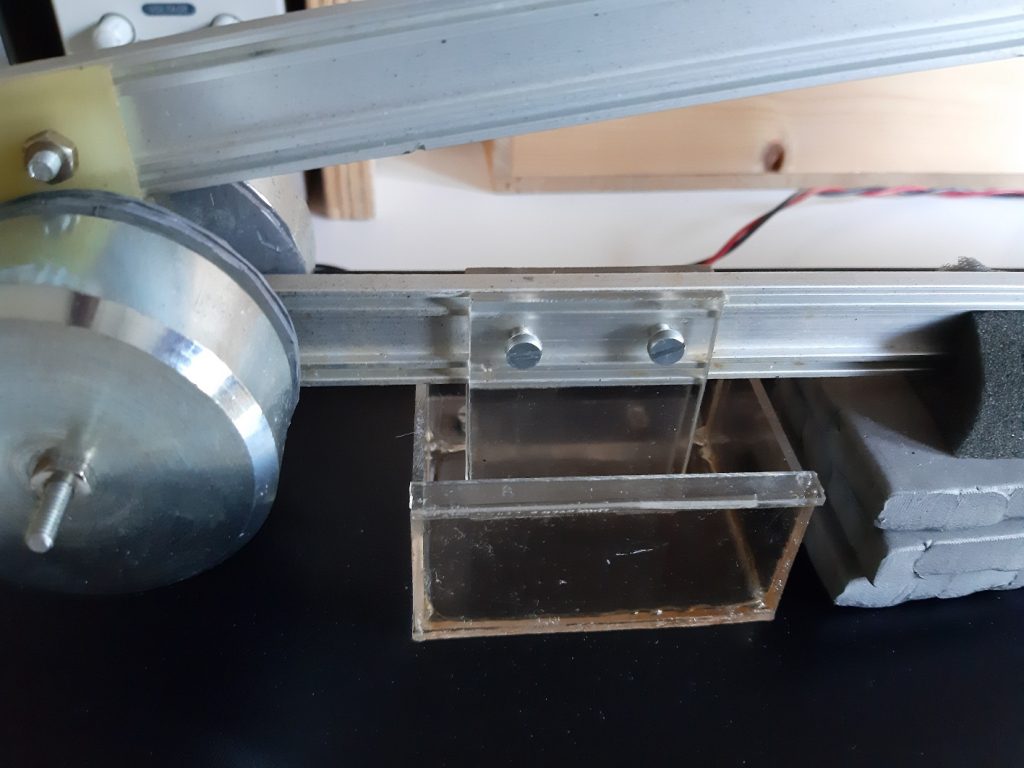 After mounting the seismometer and connecting the electronic front-end for the LVDT sensor (which will be the subject of a subsequent post) we can examine the signal that is produced by the instrument. This signal will give us valuable information on the dynamic behavior of the structure. The movable arm will oscillate freely due to very small stresses, such as an air current, for example, and will continue to oscillate for a long time. The following image shows the oscillation recorded by the oscilloscope. The average voltage value is 2.5 V and the oscillations must be within the range 0 – 5 V. The oscillation period is greater than 4 seconds. 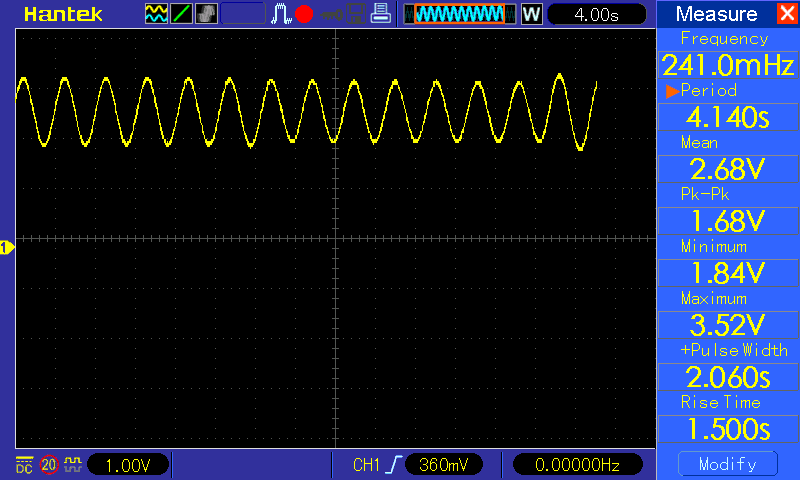 As explained before it is necessary to dampen the oscillations of the movable arm. This is obtained by pouring the mineral oil into the special tank. The tank must be filled with oil so as to achieve a swing pattern similar to that shown in the following path, in which the oscillation is damped within 4 – 5 seconds. It is necessary to do some tests in order to obtain an optimal result. The oil level must then be checked periodically. 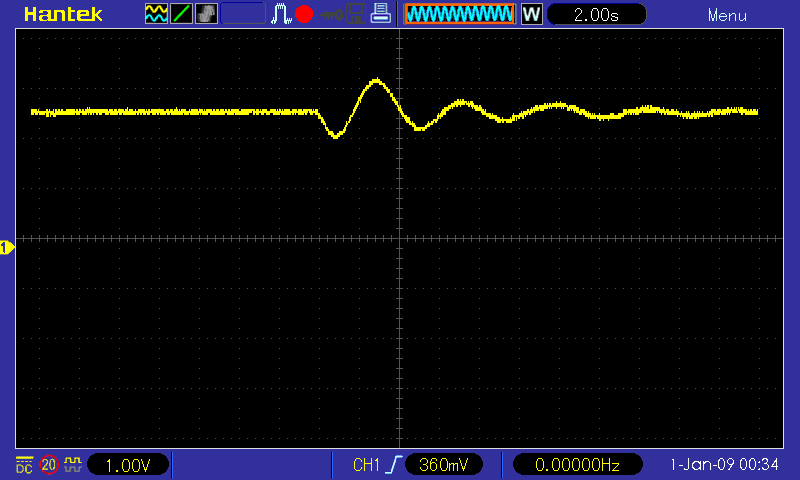 With a software that will be illustrated in a subsequent post, we can do the analysis in the frequency domain (in practice we do the FFT of the acquired signal) of our system. The spectrum is shown in the diagram below. We see how the natural frequency of the system (resonance frequency) is about 0.20 – 0,25 Hz which corresponds to a period of 4-5 seconds. Our seismometer is therefore a medium-long period tool, more suitable for detecting distant earthquakes. 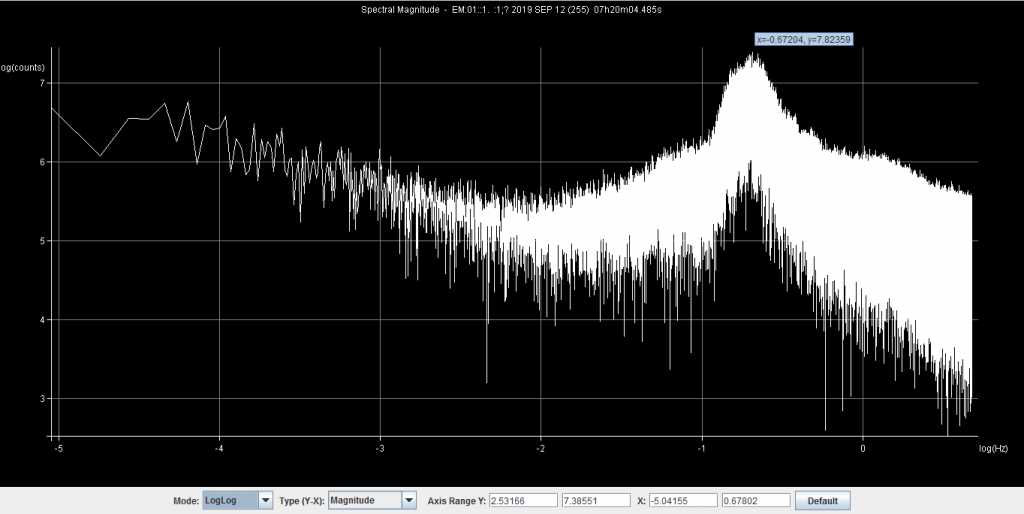 In the end the seismometer must be placed in its final position. On one side there is an analogical instrument which is used to adjust the adjustable supports. The lancet must be in the center, this corresponds to the central position of the ferrite core between the two solenoids, the one on the right and the one on the left. The image below shows the analog instrument for centering the ferrite core. 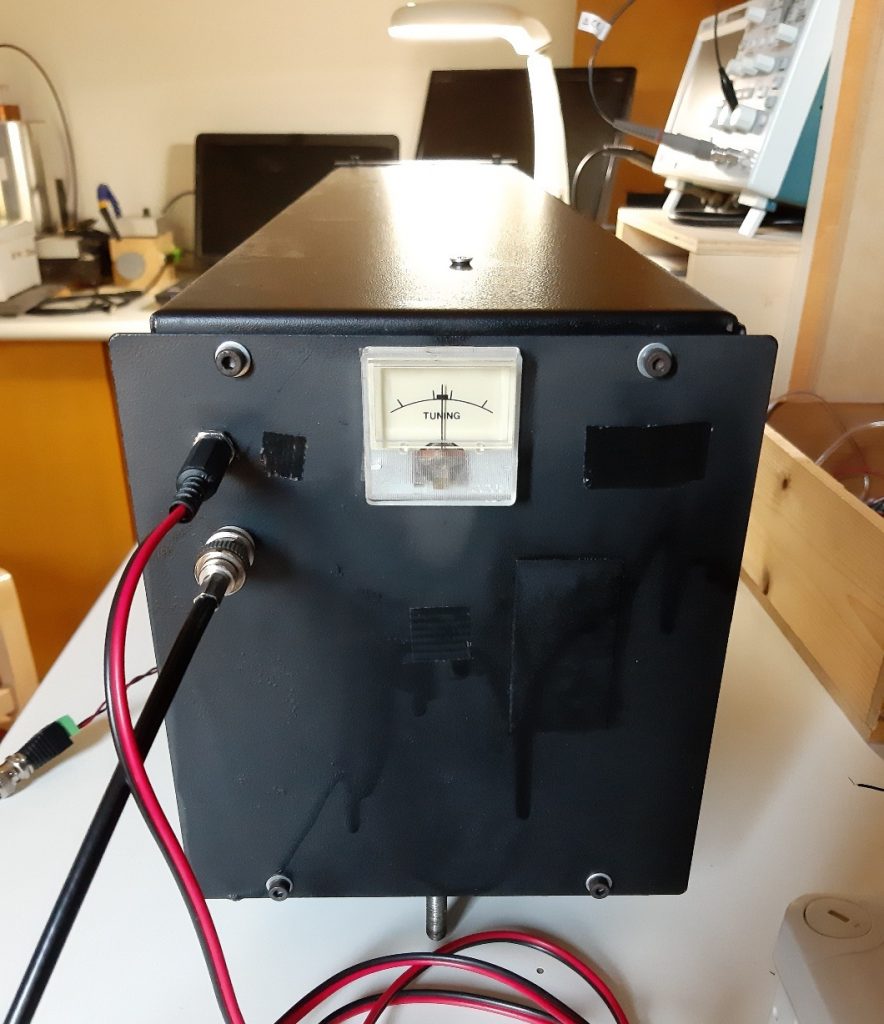 Our seismometer, having a long period, is relatively insensitive to vibrations having high frequencies. This is to our advantage because most anthropic disturbances, such as motor vehicle traffic, produce vibrations with rather high frequencies. It is however preferable to place the instrument in “quiet” rooms, such as a cellar and protect it adequately so as to reduce as much as possible the vibrations deriving from artificial sources. We have placed it along a perimeter wall oriented in the East-West direction, the instrument will therefore be particularly sensitive to the waves that propagate in the North-South direction.
The image below shows our final setup.