In nature, the right and the left are NOT interchangeable.

Chirality (a property of a rigid object that cannot be superimposed on its mirror image) was discovered by Louis Pasteur in 1848, studying the optical properties of a compound well known to oenologists, tartaric acid.
Chirality is primarily a property of organic molecules that contain a carbon atom bound to four different substitutes.
The mirror images of these chiral molecules – like a man’s hands – are not superimposable. The young Pasteur discovers that the chiral molecule exists in two forms that have (almost) identical chemical properties but are different from each other, as our right hand is different from the left. These forms will be called enantiomers.

Chiral molecules can be distinguished by their interaction with polarized light. Light, as we know, is a wave that propagates in every direction. And the wave plane normally takes on all the possible angles. With some special filters (polarizers) it is possible to pass only the light waves that propagate along a precise plane, with a precise inclination. Well, there are optically active substances, in particular chiral compounds, capable of rotating the plane of polarized light at a certain angle. Two molecules enantiomere possess the same physical properties except the rotatory power, which is identical in intensity but opposite in sign for each of them.

In the biochemical field, the chirality of a molecule is fundamental : almost all biological organisms produce only one enantiomer of a chiral molecule. Often in living systems only one of the two enantiomers of a couple is involved in metabolic cycles while the other is ignored or can even exert harmful effects.

The rotatory power of a substance is measured by the instrument known as the polarimeter. The polarimeter is made of a light source, two polarizing filters and a sample holder tube (the substance is usually solubilized). A photometer is placed downstream of the analyzer polarizer to measure the light intensity transmitted through the filters and the sample.
The cover image and the one shown below show the principle diagram of the polarimeter. 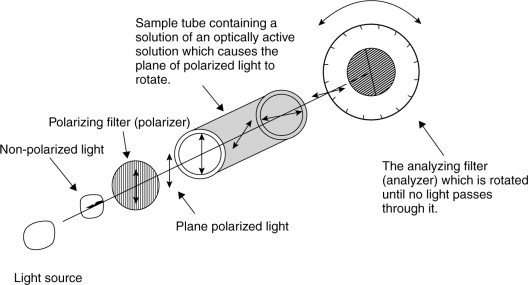 For the realization of our polarimeter we used the setup already described in the post : Polarization of Light. This is the optical bench with He-Ne laser, pair of polarizers (one fixed and one rotatable), photometer and sample holder tube. The setup is shown in the image below. 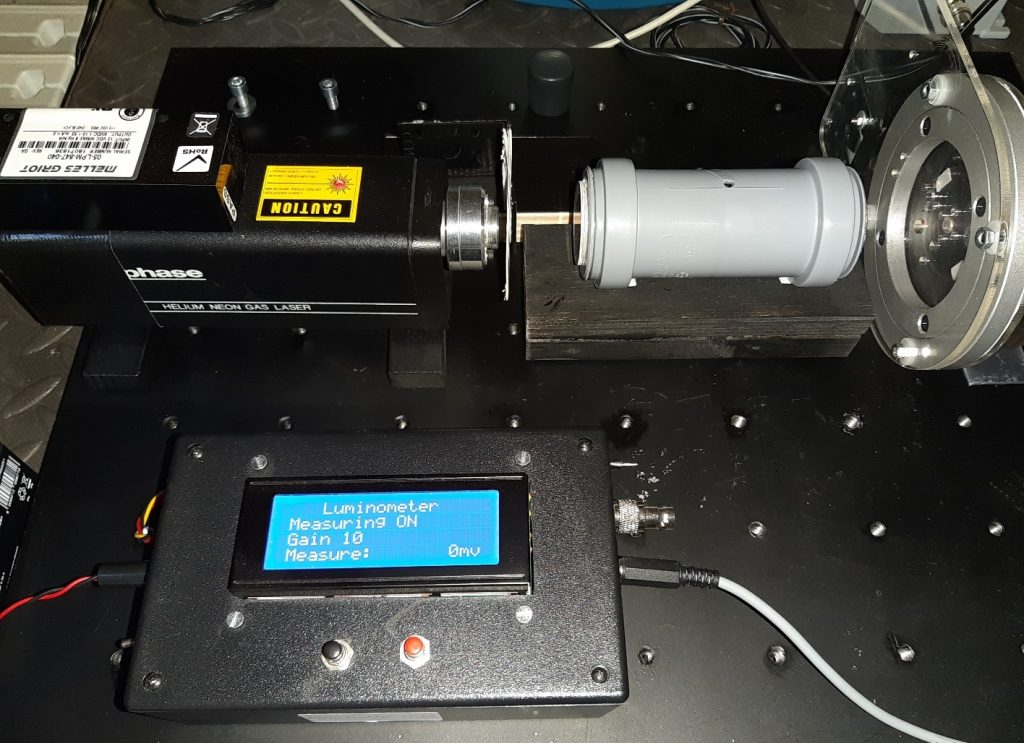 The image below shows the detail of the analyzer polarizer (mounted on a rotating support), the sample holder tube with the trace of the laser beam is visible behind the filter. 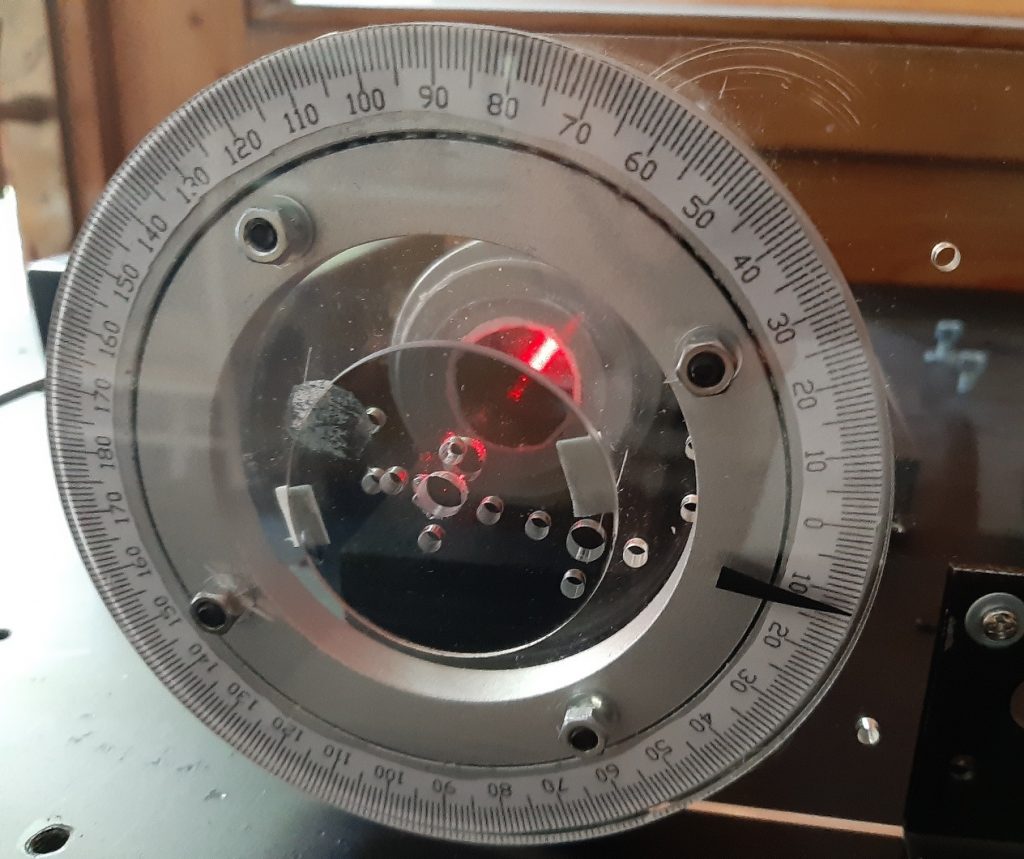 The sample holder tube, shown in the image below, was made with a plastic tube equipped with two sealing caps, all easily available in a hardware store. On the caps two large holes have been made, sealed with two circular Plexiglas windows. A hole was made in the tube for the introduction, by syringe, of the liquid sample to be examined with the polarimeter. The useful length of the tube is 108 mm. 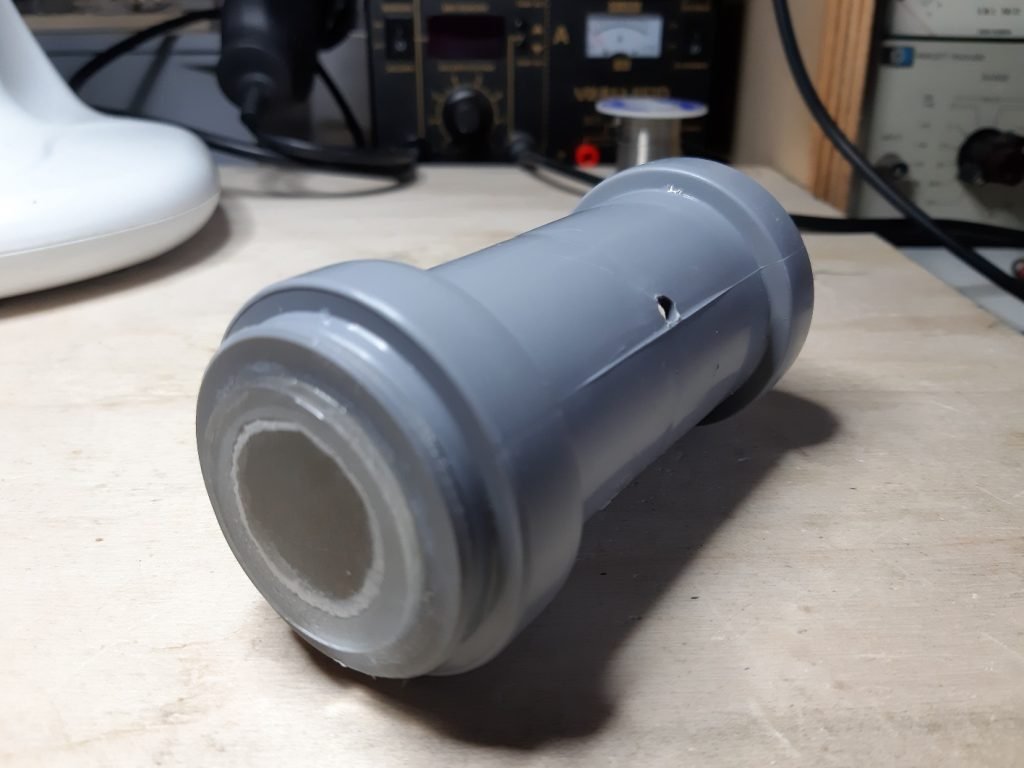 A large part of the organic molecules are chiral compounds having optical activity. For our tests we have chosen readily available substances that have a marked optical activity: sucrose (common sugar), glucose (dextrose), fructose (levulose). With these three substances we have prepared solutions with increasing concentration: 0.1 g/ml, 0.2 g/ml, 0.3 g/ml, 0.4 g/ml and for each of these we measured the rotation of the axis of polarization. The measurement was made by rotating the analyzer filter so as to determine, with the measurement of the photometer, the “position” of the minimum and compare it with “zero” in order to quantify polarization rotation. The graph below shows the results obtained with the three sugars: sucrose, glucose and fructose. 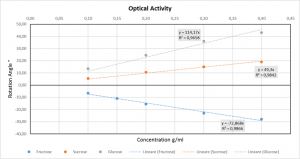 As can be seen from the graph, the points identify with a good approximation a linear regression, that is, a linear relatioship between the angle of rotation and the concentration of the substance. In literature the specific rotation (or specific rotatory power) of an optically active substance is defined the result of the following formula:

Our measurement was made with a He-Ne laser, emission at 633 nm, the specific rotation that we obtain therefore has a different value from that available in the literature data. The linear behavior, however, is well demonstrated by the experimental data obtained.