Cosmic Rays on the Dolomites 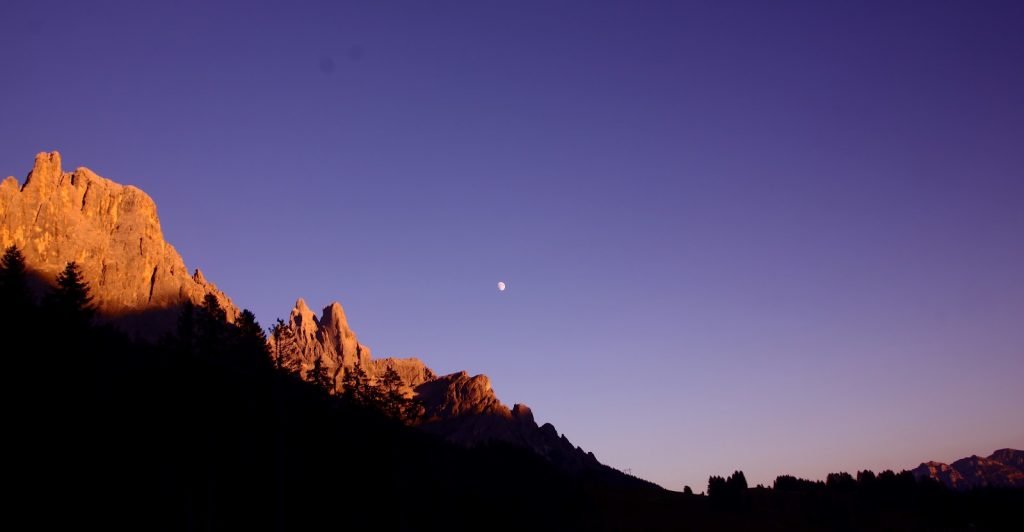 The link between cosmic rays and mountains has always been tight. Since the beginning of the research it was clear that cosmic rays, coming from deep space, are absorbed by gases in the atmosphere and that they reach the ground modified and weakened. The primary cosmic rays, mainly composed by protons and to a lesser extent by other particles, when they enter the earth’s atmosphere interact with the nitrogen nuclei and gives rise to a cascade of particles (aka secondary cosmic rays) that are sufficiently energetic to reach up to soil.
In some particle physics experiments, cosmic rays are a problem because they “pollute” the measures with a sort of “background noise”. For this reason, some of these experiments are conducted underground, for example, in abandoned mines or inside tunnels as the National Laboratories of Gran Sasso in Italy or the experiment Kamiokande in Japan, so as to screen with hundreds of meters of rock this incessant “rain” of particles.
On the contrary if you just want to study the cosmic rays you should go high in the mountains, in fact, increasing the thickness of the atmosphere the number of these particles is reduced and the less energetic portion is stopped, for this reason, especially in the past years, research laboratories on cosmic rays have been built in high mountain, in order to capture and study the maximum number of particles. 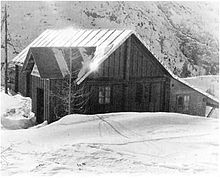 At Fedaia pass on Marmolada (left image), at about 2000m slm, in the 50s of the last century the padovan cosmic ray laboratory has been built 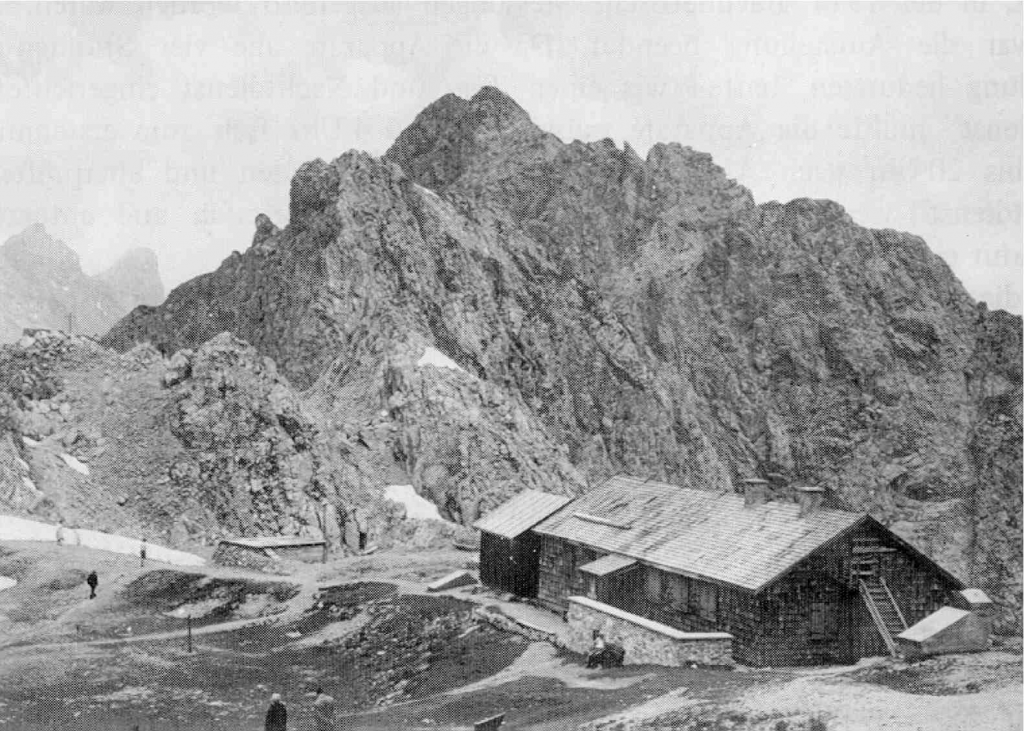 . The laboratory, that is no longer in use, was equipped with a powerful electromagnet in order to separate particles according to their polarity.

Other examples of high mountain laboratories dedicated to the study of cosmic rays are the one on Mount Hafelekar in Austria (right) and mount on the Sulphur in Canada (image below): 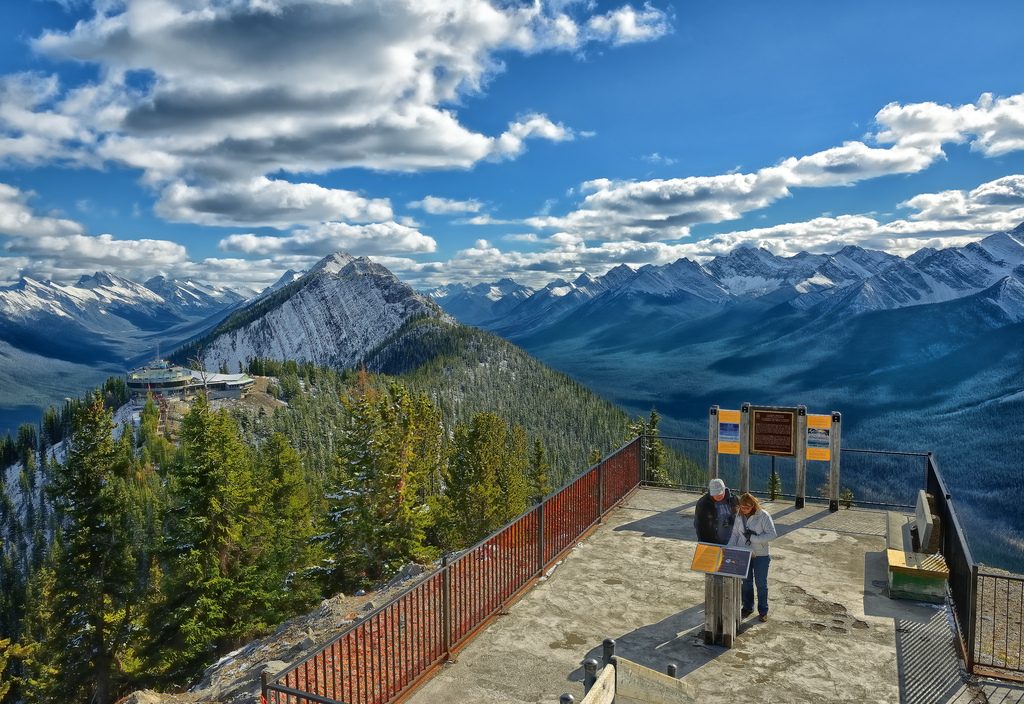 Not to be outdone ourselves of PhysicsOpenLab we decided to make a “measurements campaign” of cosmic rays in our mountains: Dolomites, by measuring both the flow of particles that the rate of muons decay in our detector.

Taking these measurements at different heights will be able to evaluate the effect of atmospheric absorption and demonstrate relativistic behavior of muons.

The instrumentation used is constituted by a sensor for muon based on scintillator crystal and photomultiplier, the photomultiplier is connected to a circuit for the HV part and for pulse signal acquisition, the pulses are sent to a PSoC microcontroller for the subsequent signal processing. This apparatus is described in the following posts:

For this campaign of measurements we have made the equipment portable !

The images below show the equipment (scintillator, electronics and battery) in its transport case: 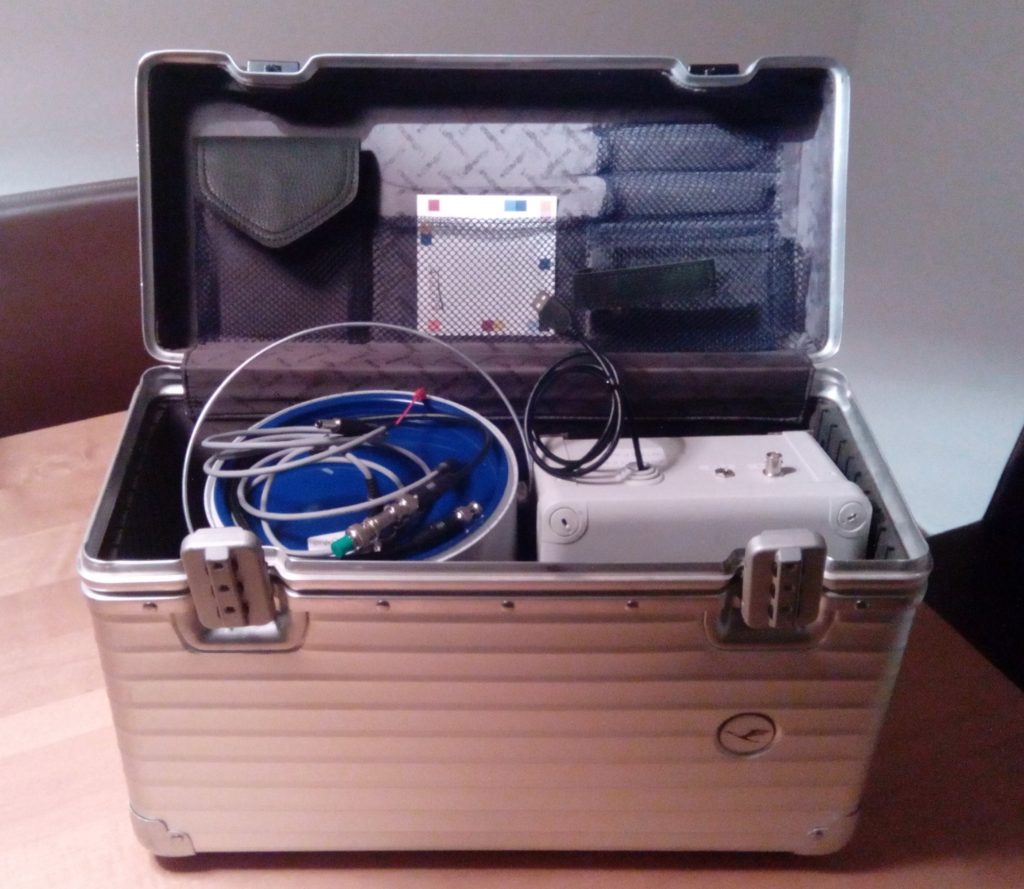 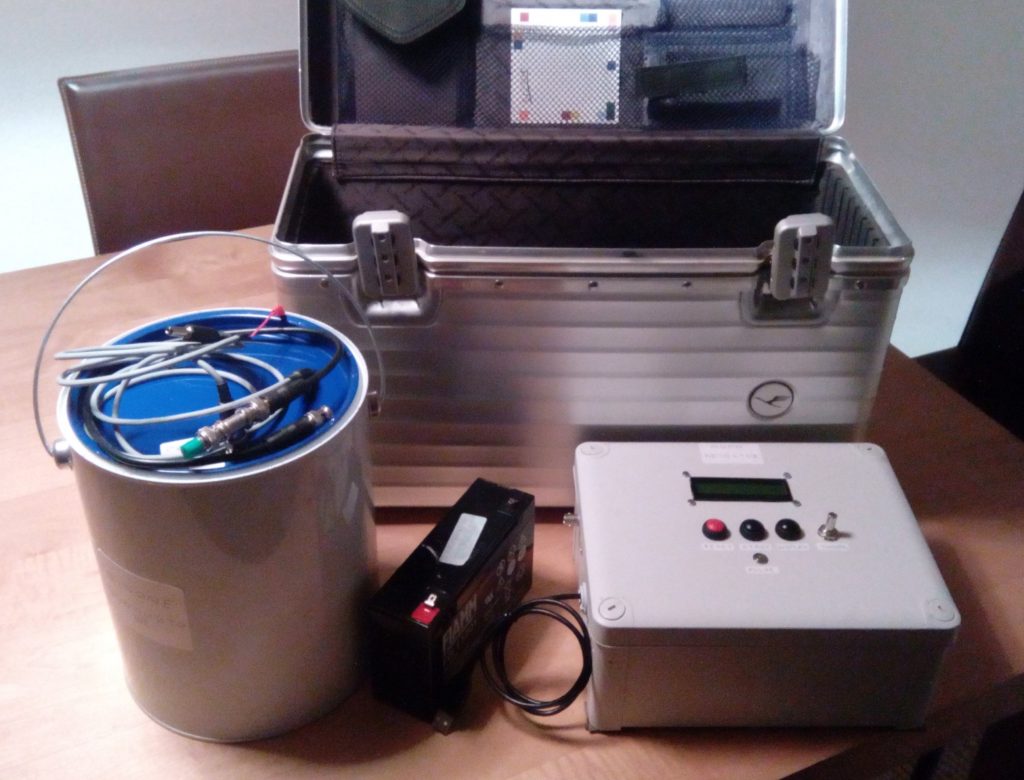 Here are the “high-mountain” places in which we made the measurements of cosmic rays, starting with the one located lowest to the higher …

Variation in the cosmic rays with increasing altitude

As you can see from the charts, with increasing altitude both the muon flux and the decay rate increases in a proportional way. 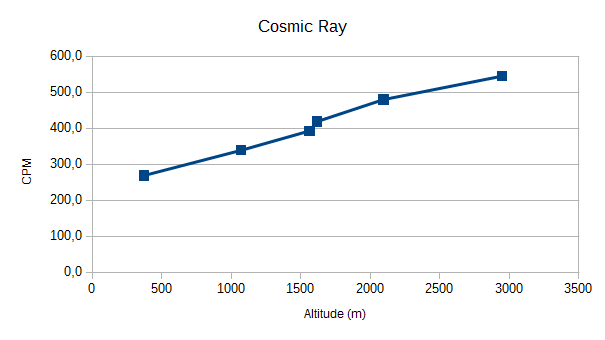 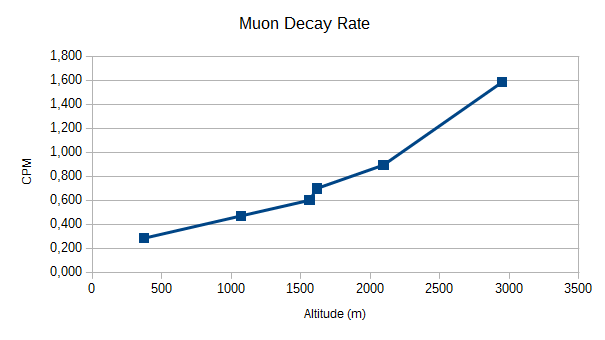 The “muon rain” helps us to have an experimental proof of the relativistic effect of time dilation. Careful study shows that the mean production height in the atmosphere of the muons detected at sea-level is approximately 15 km. Travelling at the speed of light, the transit time from production point to sea-level is then 50 μsec. Since the lifetime of at-rest muons is more than a factor of 20 smaller (2.2 μsec), the appearance of an appreciable sea level muon flux is qualitative evidence for the time dilation effect of special relativity.

With out measurement data we can make a more specific calculation.
Take, for example the measurements made at 375 m and at 2095 m :

The muons are moving at a speed which is close to the speed of light (c), then we can calculate the time they take to cover the 1720 m in altitude between the two heights where we made measurement :

Knowing the exponential decay of the muon and its mean lifetime (2.2 μsec), we can calculate the number of muons that we expect to find at altitude 375 m.

As you see the calculated value is much lower than the measured value. This is explained by the relativistic effect of time dilation (or contraction of distances): the muon is moving at a speed close to that of light, and so for him the time goes much slower than for the observers. For us, which we are motionless, the muon takes 5.7 μsec to cover the 1720 m whilst for the muon itself it has passed a time equal to only a fraction of a microsecond.

From the Einstein theory of relativity we know that the lengths contract and times dilate according to the equations given by the Lorentz transformations:

Where ϒ is the factor that is calculated with the following formula:

With these relationships and the equation (1) we can try to determine the lifetime of the muon in motion and its speed :

The value thus obtained is actually quite low compared to the real one: it is estimated that the average flow at sea level has a mean energy of 3 GeV.

Of course the numerical estimates we have made are approximate because we do not take into account the fact that muons are slowed down as they pass through the atmosphere, that is they lose energy and their speed is not constant.

Despite these approximations the results obtained are in good quality agreement with the expected theoretical data.