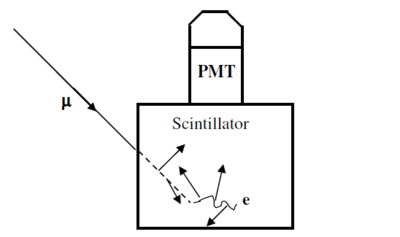 The muon detector we want to realize is based on a plastic scintillator crystal coupled to a photomultiplier. This tool completes the coincidence detector described in the post : Cosmic Rays and Coincidence Detector. 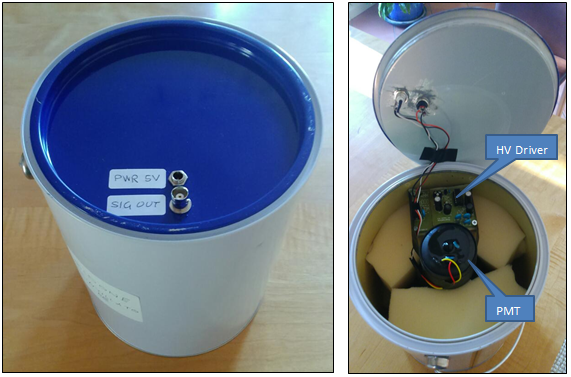 This detector is sensitive also to background radioactivity but you can easily select the pulses generated by cosmic muons since the latter have an amplitude much greater than the ones produced by background gamma radiation. To optimize the yield for the muon particles the plastic scintillator type BC412 has been chosen. It is particularly suited to detect charged particles such as electrons or muons. The area of the scintillator, 119 cm2 has been chosen wide in order to obtain a high number of events per second due to cosmic muons, also the thickness of the scintillator has been chosen quite big, 114 mm, so as to increase the stopping power and thus increase the likelihood that the muons are slowed down and come to a rest inside the scintillator.

The photomultiplier tube is driven by means of a PMT adapter Theremino placed inside the metal container. Actually it is used only the high voltage generation part. The signal is taken from the coupling capacitor C8, while the entire part of “pulse shaping” has not been assembled. The HV driver power supply is via 5V low voltage, which can be easily provided by a series of 4 1,5V batteries, the voltage can reduced a bit with a diode connected in series. 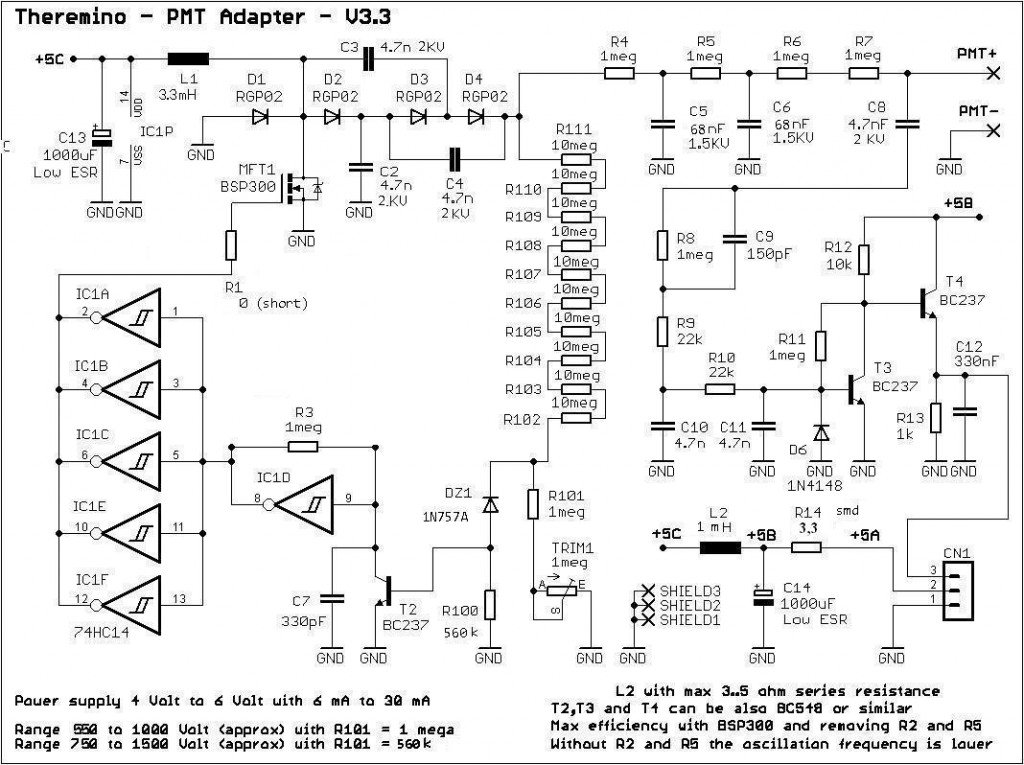 The typical high-energy muon passes right through the scintillator, but in doing so, it causes some ionization, and deposits about 50 MeV of its energy in the scintillator. And some fraction of that energy gets converted to photons of light, and some fraction of that light reaches a photomultiplier tube, which converts the brief flash of light to a detectable pulse. Fortunately, the much more frequent events due to background radiation of the earth from ambient beta and gamma rays, have an initial energy of 1 MeV or less. A discriminator easily filters out the weak light pulses they create.

by adjusting the supply voltage of the photomultiplier to around 1000V, the typical pulse produced by a muon passing through the scintillator crystal has a width of about 200-400mv; adjusting the threshold to trigger the oscilloscope to 200mv automatically selects only the pulses produced by the muons. 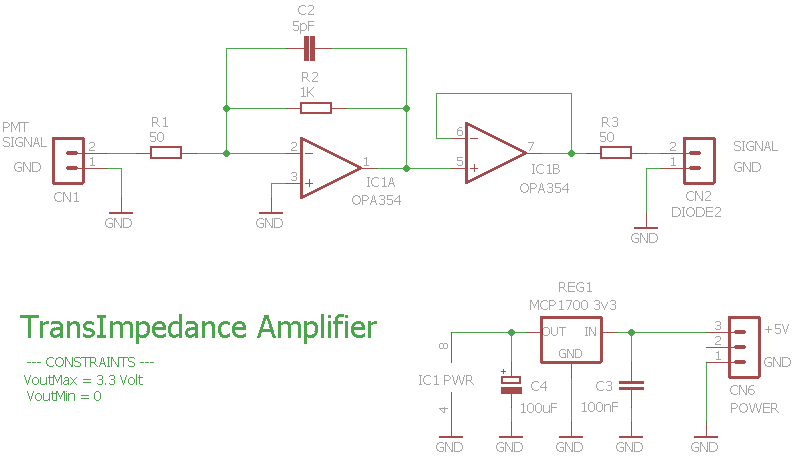 The pulses produced by the scintillation detector may be conveniently displayed by a software MCA. To do this connect the BNC output of the detector with the “pulse shaper” PMT adapter Theremino, its audio output is then connected to a PC running the software Theremino MCA. The gamma spectrum obtained shows a peak at high energies (tens of MeV) , higher than the peaks of the normal gamma energies. This peak corresponds to the energy deposited by muons interacting with the plastic scintillator. For a muon with vertical path the maximum deposited energy is about 50 MeV. Of course the peak you get does not match the actual energy of the muon, since muons with higher energy pass through the scintillator crystal and continue their path, while muons with lower energy are stopped within the crystal and undergo the consequent decay.

For cosmic ray flux measurements the signal produced by PMT is sent to a discriminator circuit which produces an output TTL logic level 1 when the signal exceeds a chosen threshold : in this way you select only the pulses of high amplitude produced by cosmic muons. By decreasing the threshold it is possible to detect also the normal environmental radioactivity. As a further screen for environmental radioactivity the scintillator has been placed on top of a lead brick with a thickness of 50mm.

Actually, even in this case, the measured value is higher because the plastic scintillator is achieved by cosmic particles also through the sides. Also measurements were made at altitudes above sea level.
The table and graph below shows the obtained results :

Pdf document with the description of the project : RilevatoreMuoni_ENG