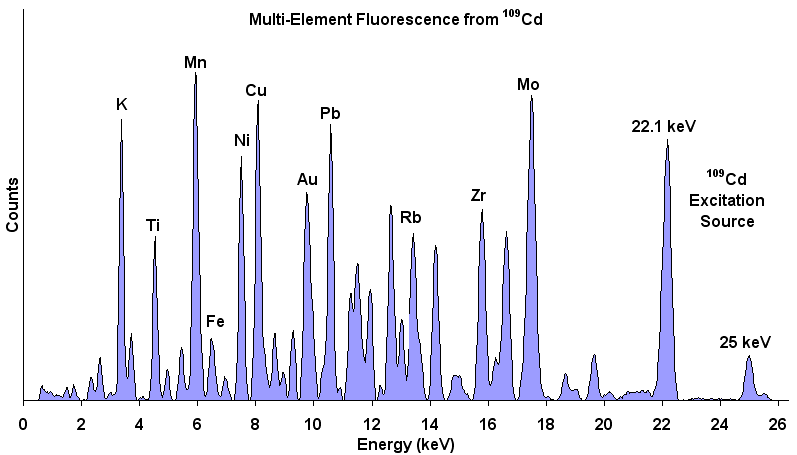 We propose, in this post, the use of XRF spectrometer, described previously, for the elemental analysis of some significant samples of elements.

Iron is a chemical element with symbol Fe (from Latin: ferrum) and atomic number 26. It is a metal in the first transition series. It is by mass the most common element on Earth, forming much of Earth’s outer and inner core. It is the fourth most common element in the Earth’s crust. Its abundance in rocky planets like Earth is due to its abundant production by fusion in high-mass stars, where the production of nickel-56 (which decays to the most common isotope of iron) is the last nuclear fusion reaction that is exothermic. Consequently, radioactive nickel is the last element to be produced before the violent collapse of a supernova scatters precursor radionuclide of iron into space.

Arsenic is a chemical element with symbol As and atomic number 33. Arsenic occurs in many minerals, usually in conjunction with sulfur and metals, and also as a pure elemental crystal. Arsenic is a metalloid. It can exist in various allotropes, although only the gray form has important use in industry.

Bromine (from Greek:, brómos, meaning “strong-smelling” or “stench”) is a chemical element with symbol Br, and atomic number 35. It is a halogen. The element was isolated independently by two chemists, Carl Jacob Löwig and Antoine Jerome Balard, in 1825–1826. Elemental bromine is a fuming red-brown liquid at room temperature, corrosive and toxic, with properties between those of chlorine and iodine. Free bromine does not occur in nature, but occurs as colorless soluble crystalline mineral halide salts, analogous to table salt. It is used as flame retardant for instance inside PCB.

Yttrium is a chemical element with symbol Y and atomic number 39. It is a silvery-metallic transition metal chemically similar to the lanthanides and it has often been classified as a “rare earth element”. Yttrium is almost always found combined with the lanthanides in rare earth minerals and is never found in nature as a free element. Its only stable isotope, 89Y, is also its only naturally occurring isotope. The most important use of yttrium is in making phosphors, such as the red ones used in television set cathode ray tube (CRT) displays and in LEDs. It is also used in the production of electrodes, electrolytes, electronic filters, lasers and superconductors.
As a metal, it is used on the electrodes of some high-performance spark plugs. Yttrium is also used in the manufacturing of gas mantles for propane lanterns as a replacement for thorium, which is radioactive.

Zirconium is a chemical element with symbol Zr and atomic number 40. The name of zirconium is taken from the name of the mineral zircon, the most important source of zirconium. The word zircon comes from the Persian word zargun, meaning “gold-colored”. It is a lustrous, grey-white, strong transition metal that resembles hafnium and, to a lesser extent, titanium. Zirconium is mainly used as a refractory and opacifier, although it is used in small amounts as an alloying agent for its strong resistance to corrosion. Zirconium forms a variety of inorganic and organometallic compounds such as zirconium dioxide and zirconocene dichloride, respectively. Five isotopes occur naturally, three of which are stable. Zirconium compounds have no known biological role.

Niobium, formerly columbium, is a chemical element with symbol Nb (formerly Cb) and atomic number 41. It is a soft, grey, ductile transition metal, which is often found in the pyrochlore mineral, the main commercial source for niobium, and columbite.
Niobium is used in various superconducting materials. These superconducting alloys, also containing titanium and tin, are widely used in the superconducting magnets of MRI scanners. Other applications of niobium include its use in welding, nuclear industries, electronics, optics, numismatics, and jewelry. In the last two applications, niobium’s low toxicity and ability to be colored by anodization are particular advantages.

Cadmium is a chemical element with symbol Cd and atomic number 48. This soft, bluish-white metal is chemically similar to the two other stable metals in group 12, zinc and mercury. Like zinc, it prefers oxidation state +2 in most of its compounds and like mercury it shows a low melting point compared to transition metals. Cadmium and its congeners are not always considered transition metals, in that they do not have partly filled d or f electron shells in the elemental or common oxidation states. The average concentration of cadmium in Earth’s crust is between 0.1 and 0.5 parts per million (ppm).

Tellurium is a chemical element with symbol Te and atomic number 52. A brittle, mildly toxic, rare, silver-white metalloid which looks similar to tin, tellurium is chemically related to selenium and sulfur. It is occasionally found in native form, as elemental crystals. Tellurium is far more common in the universe as a whole than it is on Earth. Its extreme rarity in the Earth’s crust, comparable to that of platinum, is partly due to its high atomic number, but also due to its formation of a volatile hydride which caused the element to be lost to space as a gas during the hot nebular formation of the planet.
Commercially, the primary use of tellurium is in alloys, foremost in steel and copper to improve machinability. Applications in solar panels and as a semiconductor material also consume a considerable fraction of tellurium production.

Iodine is a chemical element with symbol I and atomic number 53. The name is from Greek, meaning violet or purple, due to the color of elemental iodine vapor.
Iodine and its compounds are primarily used in nutrition, and industrially in the production of acetic acid and certain polymers. Iodine’s relatively high atomic number, low toxicity, and ease of attachment to organic compounds have made it a part of many X-ray contrast materials in modern medicine. Iodine has only one stable isotope. A number of iodine radioisotopes are also used in medical applications.

Neodymium is a chemical element with symbol Nd and atomic number 60. It is a soft silvery metal that tarnishes in air. Neodymium was discovered in 1885 by the Austrian chemist Carl Auer von Welsbach. It is present in significant quantities in the ore minerals monazite and bastnäsite. Neodymium is not found naturally in metallic form or unmixed with other lanthanides, and it is usually refined for general use. Although neodymium is classed as a “rare earth”, it is a fairly common element, no rarer than cobalt, nickel, and copper, and is widely distributed in the Earth’s crust. Most of the world’s neodymium is mined in China.

Lutetium is a chemical element with symbol Lu and atomic number 71. It is a silvery white metal, which resists corrosion in dry, but not in moist air. It is considered the first element of the 6th-period transition metals (or, on occasion, the last element in the lanthanide series), and traditionally counted among the rare earths. Lutetium is not a particularly abundant element, though significantly more common than silver in the earth’s crust; it has few specific uses. Lutetium-176 is a relatively abundant (2.5%) radioactive isotope with a half-life of about 38 billion years, and so used to determine the age of meteorites. Lutetium usually occurs in association with the element yttrium and is sometimes used in metal alloys and as a catalyst in various chemical reactions.

Osmium (meaning “smell”) is a chemical element with symbol Os and atomic number 76. It is a hard, brittle, bluish-white transition metal in the platinum group that is found as a trace element in alloys, mostly in platinum ores. Osmium is the densest naturally occurring element, with a density of 22.59 g/cm3. Its alloys with platinum, iridium, and other platinum group metals are employed in fountain pen nibs, electrical contacts, and other applications where extreme durability and hardness are needed.

Gold is a chemical element with symbol Au (from Latin: aurum) and atomic number 79. It is a bright yellow dense, soft, malleable and ductile metal. The properties remain when exposed to air or water. Chemically, gold is a transition metal and a group 11 element. It is one of the least reactive chemical elements, and is solid under standard conditions. The metal therefore occurs often in free elemental (native) form, as nuggets or grains, in rocks, in veins and in alluvial deposits. It occurs in a solid solution series with the native element silver (as electrum) and also naturally alloyed with copper and palladium. Less commonly, it occurs in minerals as gold compounds, often with tellurium (gold tellurides).

Bismuth is a chemical element with symbol Bi and atomic number 83. Bismuth, a pentavalent post-transition metal, chemically resembles arsenic and antimony. Elemental bismuth may occur naturally, although its sulfide and oxide form important commercial ores. The free element is 86% as dense as lead. It is a brittle metal with a silvery white color when freshly produced, but is often seen in air with a pink tinge owing to surface oxidation. Bismuth is the most naturally diamagnetic element, and has one of the lowest values of thermal conductivity among metals.
Bismuth has long been considered as the element with the highest atomic mass that is stable. However, in 2003 it was discovered to be slightly radioactive: its only primordial isotope, bismuth-209, decays via alpha decay with a half life more than a billion times the estimated age of the universe.