X-ray fluorescence (XRF) is the emission of characteristic “secondary” (or fluorescent) X-rays from a material that has been excited by bombarding with high-energy X-rays or gamma rays. The phenomenon is widely used for elemental analysis and chemical analysis, particularly in the investigation of metals, glass, ceramics and building materials, and for research in geochemistry, forensic science and archaeology.

Each element has electronic orbitals of characteristic energy. Following removal of an inner electron by an energetic photon provided by a primary radiation source, an electron from an outer shell drops into its place. There are a limited number of ways in which this can happen, as shown in Figure. The main transitions are given names: an L→K transition is traditionally called Kα, an M→K transition is called Kβ, an M→L transition is called Lα, and so on. Each of these transitions yields a fluorescent photon with a characteristic energy equal to the difference in energy of the initial and final orbital. The wavelength of this fluorescent radiation can be calculated from Planck’s Law : λ = h c / E 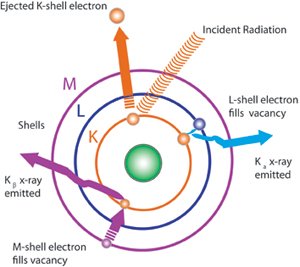 The fluorescent radiation can be analyzed either by sorting the energies of the photons (energy-dispersive analysis) or by separating the wavelengths of the radiation (wavelength-dispersive analysis). Once sorted, the intensity of each characteristic radiation is directly related to the amount of each element in the material. This is the basis of a powerful technique in analytical chemistry. The XRF method is widely used to measure the elemental composition of materials. Since this method is fast and non-destructive to the sample, it is the method of choice for field applications and industrial production for control of materials. Depending on the application, XRF can be produced by using not only x-rays but also other primary excitation sources like alpha particles, protons or high energy electron beams.

The XRF apparatus consists of a scintillation detector with CsI crystal and photomultiplier. The thickness of the crystal is of only 1 mm and the front window of the probe is protected by a thin sheet of aluminum so as to allow the passage also of the lowest energies. The probe type is SEI-RAP47. As excitation source we have been used 7 caps of 1μCi of americium- 241 (from smoke detector), arranged radially on a brass support and with lead sheet screens. The photomultiplier tube is fed from the PMT adapter and the signals are acquired by the sofwtare Theremino MCA, already used and described in previous posts.

As XRF excitation source the isotope americium 241 is used, it has a net emission line at about an energy of 59keV which is enough to excite the K and L lines of all the elements .

XRF Spectrum of light materials such as Wood and Water

In materials consisting of light elements the backscattering for compton effect is predominant, while the photoelectric effect, with subsequent fluorescent emission is marginal.
The compton backscattering follows the trend of the excitation spectrum but with lower energies and is practically not related to the type of material.

XRF Spectra of some Elements

For elements with sufficiently high atomic number (N > 25 for our apparatus) the photoelectric effect with the subsequent X fluorescent emission becomes measurable and progressively predominant.

Copper is a chemical element with symbol Cu (from Latin: cuprum) and atomic number 29. It is a ductile metal with very high thermal and electrical conductivity. Pure copper is soft and malleable; a freshly exposed surface has a reddish-orange color. It is used as a conductor of heat and electricity, a building material, and a constituent of various metal alloys.

Silver is a chemical element with symbol Ag and atomic number 47. A soft, white, lustrous transition metal, it possesses the highest electrical conductivity of any element, the highest thermal conductivity of any metal and is the most reflective metal on the planet. The metal occurs naturally in its pure, free form (native silver), as an alloy with gold and other metals, and in minerals such as argentite and chlorargyrite. Most silver is produced as a byproduct of copper, gold, lead, and zinc refining.

Pdf Documents with complete description of XRF measurements for ALMOST EVERY ELEMENT : XRFSpec_ENG