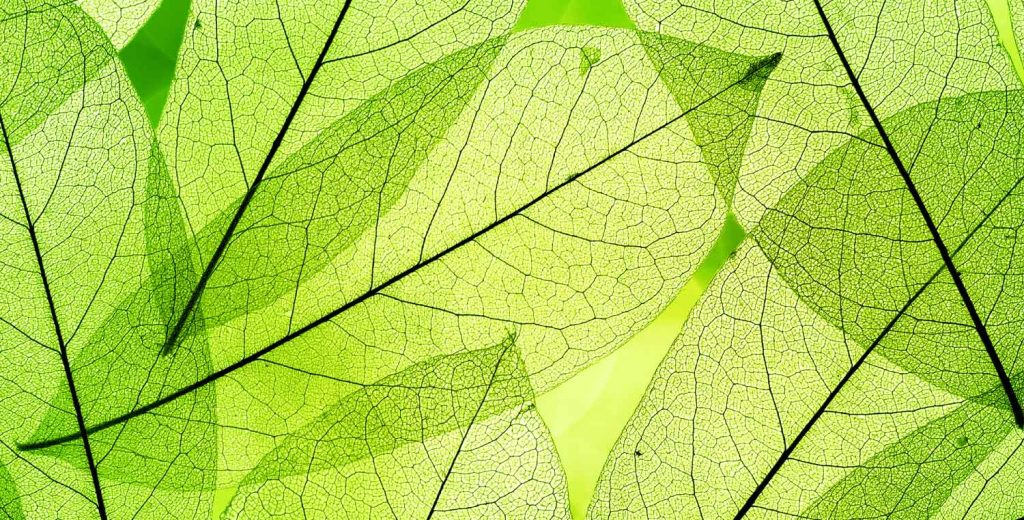 In a previous post: Thunder Optics SMA Spectrometer & Spectragryph, we described the Thunder Optics SMA spectrometer (hereafter referred to as the TO spectrometer) and used it to acquire the spectra of some light sources. We are now continuing the experimentation activity using this tool to carry out the spectroscopic analysis of the molecules found in plants and algae which are responsible for the fundamental process of photosynthesis.

All photosynthetic organisms, both prokaryotic and eukaryotic, capture the light energy of the sun through the use of pigments. These are structurally and chemically different compounds, but they have conjugated double bonds as a unifying factor. With the exception of bacteria which carry out anoxygenic photosynthesis, in all other species the reaction center is the pigment chlorophyll a. However, each reaction center is equipped with a large number of accessory pigments, which combine to collect photons and convey them to the active site. Furthermore, some of them are able to dissipate any excess radiation, preventing this from causing photodamage. Among this rich series of pigments we remember chlorophylls, carotenoids (divided into xanthophylls and carotenes depending on whether or not they have oxygen atoms in their structure) and phycobilins.

The ability of each pigment to collect light energy varies according to the energy of the photon. In other words, the different compounds absorb light better at different points in the light spectrum. By measuring the absorbance of a sample that contains the solubilized pigment separated from the others, it is possible to obtain an absorption spectrum, characteristic of each of these substances, in which different absorption maxima may be present. [from “Esperienze di Laboratorio per la Didattica del Settore BIO/04” Società Italiana di Fisiologia Vegetale].

Beta Carotene is a molecule that belongs to the category of carotenoids. Carotenoids are secondary or accessory pigments that absorb light and are found in thylakoid membranes within chloroplasts, which in turn are found in plant cells. These pigments can be yellow, red or purple in color. The yellow-colored carotenoid is lutein, while the red-orange is β-carotene. Carotenoid pigments absorb light at wavelengths that are not absorbed by chlorophylls, so they are additional light receptors. There are 2 types of carotenoids; carotenes and xanthophylls. Carotene is orange in color while xanthophylls are yellow. These accessory pigments protect the chlorophyll from photo-oxidation and transfer light energy to the chlorophylls. Carotenoids manifest in mature leaves when chlorophyll begins to disintegrate.

The Beta Carotene sample we analyzed consists of an extract of carrots solubilized in oil (Fig. 1)

In Fig. 2 we show the structural formula of the two main carotenoid molecules: Lutein and Beta Carotene. These are linear molecules with a high level of conjugation (double bonds alternating with single bonds between carbon atoms). Under these conditions the electrons are “scattered” along the entire molecule and can be modeled as a particle confined in a one-dimensional box having the size of the molecule. These delocalized electrons are responsible for the absorption spectrum of beta carotene (Fig. 3).

The absorption spectrum measured with our TO spectrometer is shown in the following graph. The absorption band extends from 350 nm to 500 nm, with two maxima at around 430 nm and 480 nm.

There are different classes of chlorophylls, the main ones being chlorophyll-a (chl-a) and chlorophyll-b (chl-b). In plants, the ratio of chl-a to chl-b is about three to one. Only chl-a is a constituent of the photosynthetic reaction centers and therefore can be considered the central pigment of photosynthesis. Furthermore, the light energy absorbed by chl-b can be very efficiently transferred to chl-a. In this way chl-b improves the efficiency of using solar energy. The basic structure of chlorophyll has a “head” with a Mg-tetrapyrrole ring and a phytol tail. The porphyrin head consists of 4 pyrrole rings joined by CH bridges. Magnesium Mg++ is located in the center of the ring as a central atom. Mg++ is covalently bonded to two N atoms and coordinatedly bonded to the other two atoms of the tetrapirrole ring (Fig. 4). 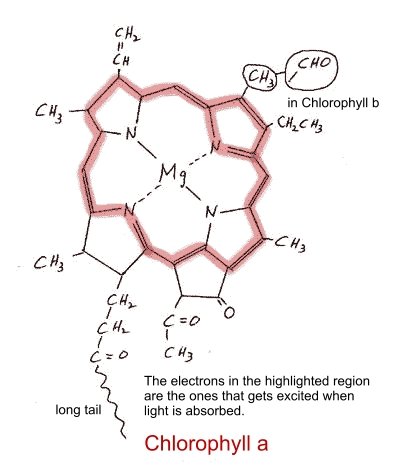 Fig. 4 – Structural formula of Chlorophyll [From “Science & Plants for Schools”]

In photosynthesis, solar energy is used by plants to oxidize water, resulting in the release of O2, and to reduce CO2 to sugars. The general reaction of photosynthesis is as follows:

The sample we analyzed was obtained by chopping spinach leaves and letting them macerate in ethyl alcohol. The chlorophyll sample is shown in Fig. 4, together with the phycocyanin solution. 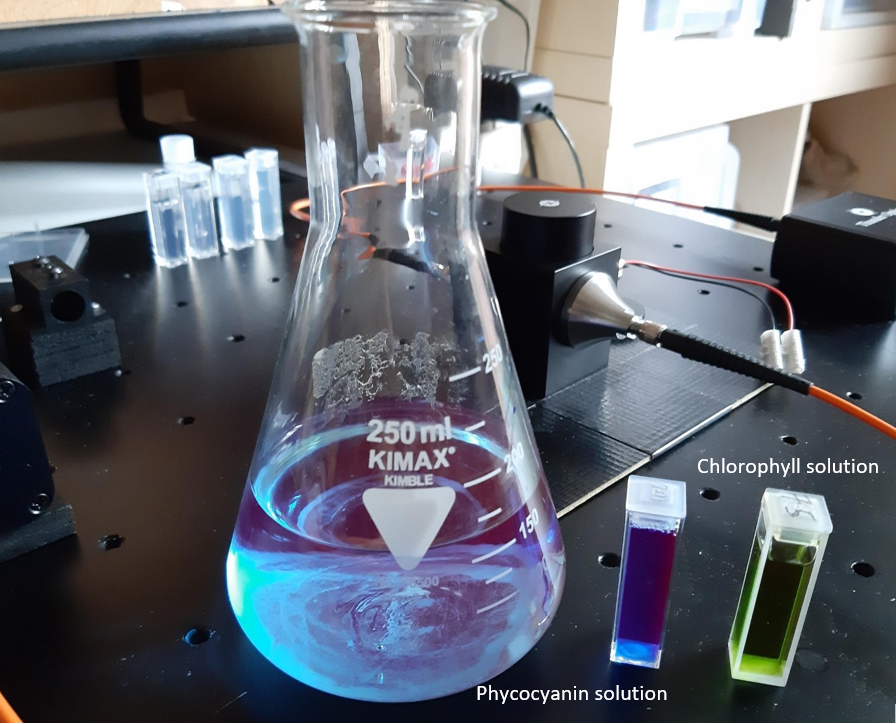 Fig. 5 – Solution of Phycocyanin and solution of Chlorophyll

The fluorescence spectrum is instead shown in Fig. 7, together with a detail of the absorption spectrum. The fluorescence curve, which has a maximum at 674 nm, follows the “mirror” trend of absorption, as usually happens (Stokes shift).

Phycocyanin belongs to the categories of phycobilins. These molecules are open chain tetra pyrroles without Mg++ and phytol tail. Green algae and red algae possess phycobilins such as phycoerythrin and phycocyanin. These are also pigments that collect light and contribute to the process of photosynthesis. Phycobilins are covalently linked to specific binding proteins, forming phycobiliproteins, which associate to form highly ordered complexes called phycobilisomes that make up the primary light-gathering structures in microorganisms such as green algae and red algae. In Fig. 8 we report the structural formula of the phycobilins. 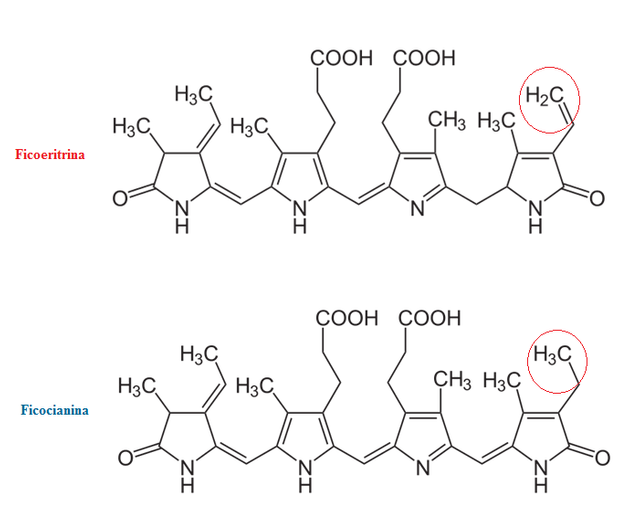 Powdered phycocyanin is readily available on online markets or in health food stores. It is obtained as an extract from green algae and is soluble in water producing solutions of a beautiful blue color. Our sample is an aqueous solution of phycocyanin, as shown in Fig. 5. Like chlorophyll, phycocyanin also fluoresces with the maximum around 640 nm. In Fig. 6 and Fig. 12 the absorption spectrum is shown, where it is noted that there is absorption in the band around the wavelength of 600 nm, while in Fig. 9 we show the fluorescence spectrum and part of the absorption one, also in this case the fluorescence spectrum and the absorption spectrum are the mirror image of each other.

Phycoerythrin is the other phycobilin found in red algae. We have extracted it from the dried palmaria algae (also known as dulse). We left fragments of dried seaweed to macerate in the water, then we frozen and thawed this mush. The freezing operation has the effect of breaking the cell walls allowing the pigment to enter the aqueous solution: Fig. 10 shows the seaweed fragments and the phycoerythrin solution obtained from the extraction process. This pigment exhibits orange fluorescence when excited by green light (Fig. 10). 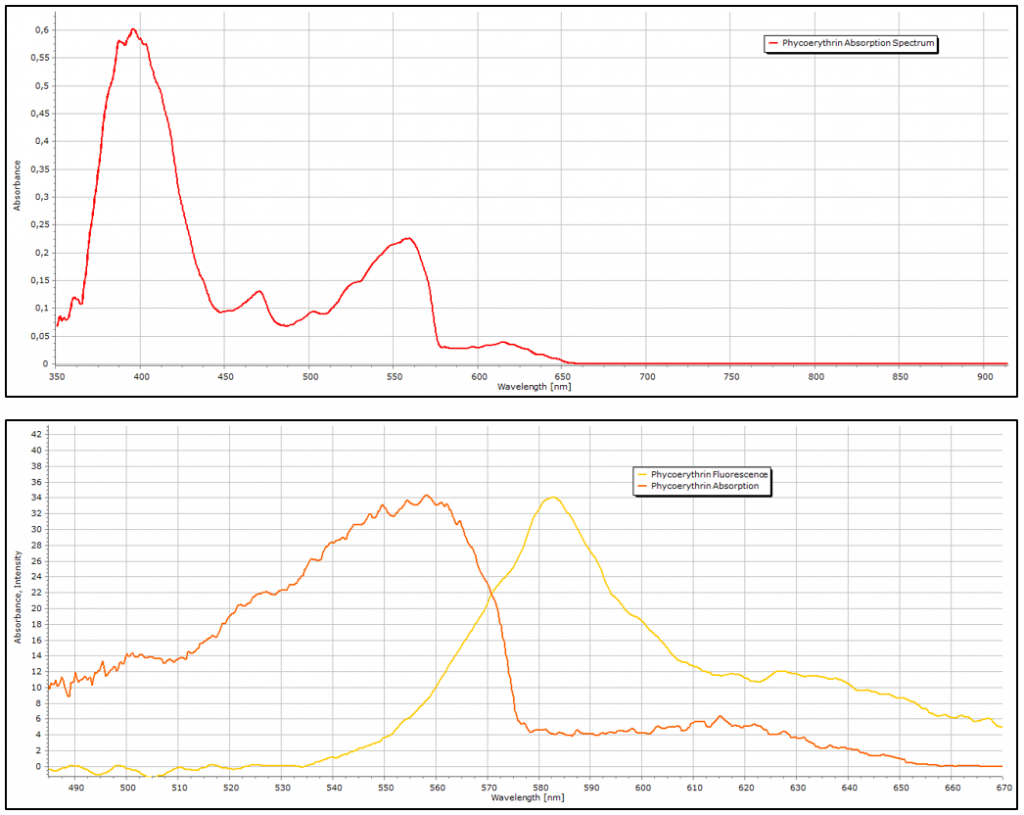 If we insert in the same graph the absorption spectra of all the pigments we have examined (Fig. 12) an interesting fact is highlighted: all the wavelengths ranging from near ultraviolet up to the infrared limit are absorbed by some of the pigments.

Fig. 12 – Absorption spectra of pigments involved in the photosynthesis process

We know that the only photo-active molecule is chlorophyll-a, but the other pigments have the fundamental function of collecting light energy at other wavelengths and conveying it to the chlorophyll-a molecule.