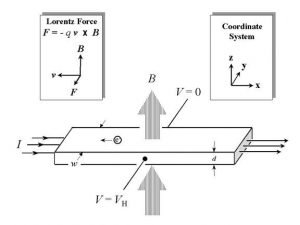 As depicted in the cover image, the Hall effect is a physical phenomenon for which a potential difference is observed in a transverse direction in a conductor crossed by electric current in a longitudinal direction when it is subjected to a perpendicular magnetic field. It is named after the American physicist Edwin Hall.
The Hall element consists of a strip of material that can conduct electricity, usually a conducting metal or semiconductor. The thickness of the strip is negligible compared to the other two dimensions. A current flows in this material by applying an electrical voltage to its ends. In the conductors, the electrons move from the negative to the positive pole of the battery (the current will have the opposite direction). The Hall element is immersed in a magnetic field transversal to the current.
Since the conduction electrons move and are affected by the magnetic field the Lorentz force acts on them:

The Lorentz force is orthogonal both to the direction of the magnetic field and to the direction of motion of the charge carriers. Referring to the image above, the force is directed transversely to the material and causes a potential difference between the two opposite sides of the material. In equilibrium conditions the Lorentz force is compensated by the force originating from the transverse electric field, by imposing the equilibrium condition we can obtain the formula for calculating the Hall voltage.

Where I is the current and B is the magnetic field, while n is the density of the carriers, t the thickness of the material and e is the charge of the carriers. As you can see from the formula, the Hall voltage is proportional to the current and to the intensity of the magnetic field, while it is inversely proportional to the density of the carriers and to the thickness of the material: to obtain measurable values ​​it is therefore important to use thin material samples. The dependence on the number of carriers makes us predict a very small effect in conductors, for example in metals, and a much more pronounced effect in semiconductor materials that have a much smaller number of charge carriers.

The very naive first attempt was made with a very thin copper foil. The current of about 5 A was made to flow along the sheet and the voltage between the two sides of the sheet was measured during the application of a magnetic field generated by a permanent neodymium magnet (about 0.2T). The image below shows the copper foil with the connection cables. However, the measurements did not lead to any results. 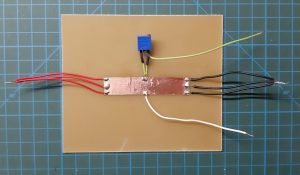 To obtain a measurement of the Hall effect on a conductor, it is necessary to opt for a bad conductor in order to have a low carrier density and therefore a higher Hall voltage. A good candidate is bismuth which has a resistivity of 106.80 μΩcm. Bismuth is a readily available metal, it is non-toxic and melts at about 270 °C. We cast a bismuth block with a gas torch and pressed it between two borosilicate glass surfaces to obtain a thin foil. Once cooled, the foil comes off easily and can be cut with scissors, carefully because it is quite fragile. 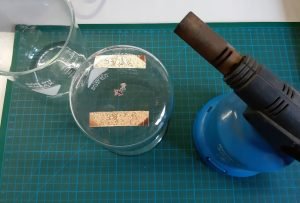 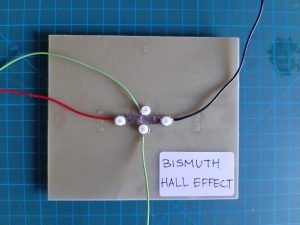 With bismuth foil the effect is considerably more measurable and the voltage is of the order of a few millivolts, therefore within the reach of a good measuring instrument. The images below show the voltages that are measured when a neodymium magnet is applied, first in one direction and then in the opposite direction. 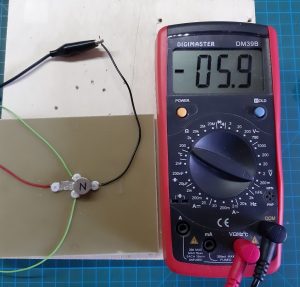 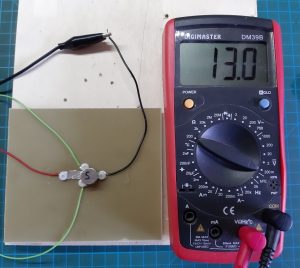 In semiconductors the Hall effect is much more pronounced due to the lower density of charge carriers compared to a conductor. Unfortunately, however, we have not found a suitable semiconductor sample to carry out these tests.

The hall effect in semiconductors is used for the construction of sensors for measuring the magnetic field. These are extremely compact and low cost robust sensors. Different measurement ranges are available: from millitesla up to over 1 tesla. These sensors give an analog output whose value is proportional to the magnetic field according to a constant of proportionality which determines the sensitivity of the detector. The model we used is the CYSJ362A sensor with differential output, with a scale that reaches up to 3T, and a sensitivity of 1.5V/T. This sensor is suitable for measurement of rather intense magnetic fields such as those produced by powerful  permanent magnets.

The magnetometer we made is based on the stoppi71 project https://www.instructables.com/Physics-With-Magnets/. It is a simple project that uses an Arduino nano for the acquisition of the analog signal produced by the Hall sensor and for the management of an I2C display used for showing the measurement. The Arduino and the display are powered by a 9V battery while the Hall sensor is powered by a 78L05 regulator that supplies 5V from another 9V battery.
The following images show our Hall effect magnetometer. 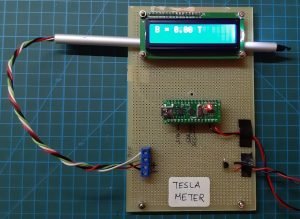 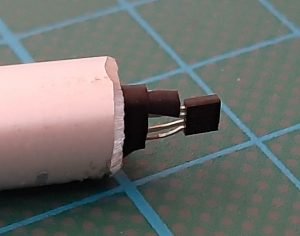 In this post we have illustrated the Hall effect and made some qualitative tests with a bismuth foil. The Hall effect in semiconductors has become the “standard” way to measure magnetic fields (not high precision though), so we showed the construction of a simple teslameter based on a Hall effect sensor.