Abstract : in this post we describe a simple experiment aimed at demonstrating the photoacoustic effect. The experiment is within the reach of any school laboratory and uses easily available materials. The photoacoustic cell consists of a simple plastic test tube, closed at one end by a preamplified microphone and internally lined on one side with an absorbent material. The light source is provided by a violet semiconductor laser (405nm) modulated to emit short pulses. With an oscilloscope you can easily view the acoustic pressure pulses detected by the microphone, synchronized with the laser modulation pulses.

The photoacoustic (PA) effect was discovered in 1880 by Alexander Graham Bell. He observed that when a beam of sunlight is focused on a dark sample and rapidly interrupted with a rotating disk, sound is produced. The effect is based on the rapid heating / cooling that occurs following the absorption of light, and on the consequent compression / rarefaction of the surrounding air.
In the past the PA effect has been vastly explored in solids for spectroscopy in order to measure properties of materials. 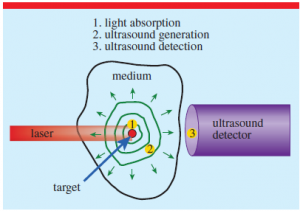 In recent years, the PA effect was investigated for medical imaging purposes. PA is a physical process, which relies on very brief pulses of light being sent into the tissue to provide detailed feedback on its structure (image aside). The main advantage of this approach is that PA signal is less prone to scattering thereby improving the penetration depth and spatial resolution that can be used to obtain detailed images of nerves, veins and arteries (cover image).
(Ref. Music-of-light stethoscope: a demonstration of the photoacoustic effect Nikitichev et al)

The physical process of the photoacoustic effect is quite simple, however the equipment can be very sophisticated and expensive. In this post we instead show how with the use of simple components, within the reach of any school laboratory, it is possible to carry out demonstration experiments that highlight the essential aspects of the photoacoustic phenomenon. 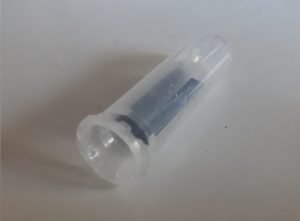 The cell consists of a simple plastic test tube with an external diameter of 10mm and a length of 40mm. A black cardboard rectangle was glued to one side of the tube. The walls of the test tube are quite transparent, the cardboard constitutes the surface which has the purpose of absorbing the light radiation.
The diameter of our cell adapts well to the size of a classic electret microphone, in this way, by pushing a little bit, you get a cylindrical sealed cell, with one side transparent, while the other is occupied by a absorbent black surface and whose cap is made up of the microphone, as shown in the image below.

The light source consists of a 10mW laser diode with 405nm emission, therefore on the border between the visible and ultraviolet. Part of the beam is reflected/diffused by the entrance wall of the test tube but a considerable part still crosses the wall and reaches the absorbent internal surface. The beam was adjusted to be focused on the internal absorbent black cardboard layer.
The laser is powered by two 1.5V batteries connected in series to produce a pilot voltage of 3V. With a simple bipolar transistor a circuit was made to modulate ON-OFF the supply voltage of the laser . The modulation signal is produced by a commercial signal generator. The images below show the experimental equipment. 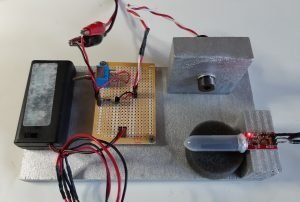 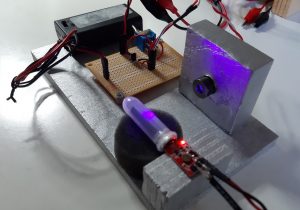 Driving the laser with a simple ON-OFF modulation circuit does not allow to obtain very short laser pulses. The trace below shows the pulse of light that is obtained with a 10msec driving pulse. This duration limits the maximum frequency to about 100Hz.

Despite the simplicity of the experimental apparatus, the photoacoustic effect is easily obtained by piloting the laser with a train of impulses. The oscilloscope traces shown below show the modulation signal in blue and in yellow the signal obtained by the microphone.
The minimum duration of the impulse is approximately 10msec, increasing the duration of the laser drive impulse, the presence of two pressure peaks is noted, one positive for compression, at the rising edge, and one negative for rarefaction at the of the descending front. 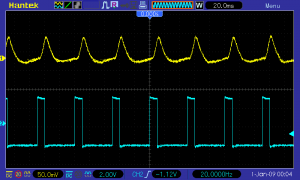 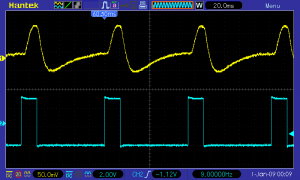 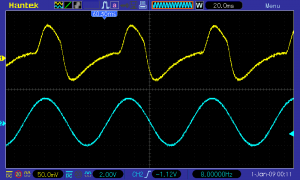 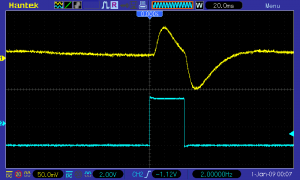 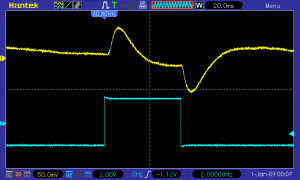