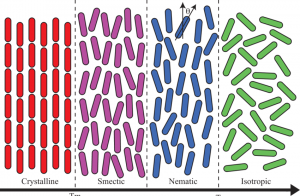 Abstract : in this Post we show how, by using an easily available liquid crystal cell by disassembling low cost equipment, it is possible to create an electro-optical modulator based on the polarization of light. Then we characterized our DIY modulator by carrying out transmittance, polarization and response speed measurements.

Liquid crystals are a class of organic compounds with particular liquid-crystalline properties, discovered in 1888 by the Austrian botanist Friedrich Reinitzer. Reinitzer noticed that by heating cholesterol benzoate this first became opaque, and then cleared up as the temperature gradually increased. Once cooled, the liquid turned bluish and then crystallized.

In practice, these substances do not pass directly from the liquid to the solid state, but in particular conditions they are able to organize themselves in intermediate phases (mesophases) which present characteristics of both the crystalline and liquid solid state. This dualism justifies the term by which these compounds are indicated: liquid crystals.
Liquid crystals (LC) are therefore a state of matter which has intermediate properties between those of conventional liquids and those of solid crystals. For example, a liquid crystal can flow like a liquid, but its molecules can be oriented similarly to the crystal. There are many different types of liquid crystal phases, which can be distinguished by their different optical properties.

Liquid crystals have found many applications in physics, chemistry, electronics and life sciences. Among these applications there are many devices that exploit the electro-optical effect of LC materials such as LC display, LC light modulator, LC optical modulator and LC optical switch.

In this post we want to show the operation of an LC cell used as a light modulator. 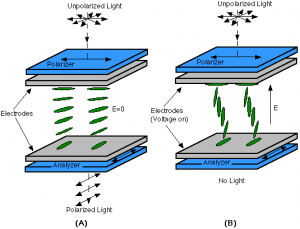 As can be seen from the figure above, the liquid crystal is placed between two transparent electrodes, through which the electric field E is applied. By inserting a polarizing filter before to the cell input and an analyzer filter to the cell output, it is possible to exploit the polarization rotation effect to create an optical switch.

Our Electro-Optic polarization modulator is based on a liquid crystal cell. The liquid crystal cell is harvested from a low-cost auto-darkening welding mask filter (figure below). This is similar in construction to an LCD display but the purpose is different, the auto-darkening filter has a light sensor that drives the filter dark when it detects the welding arc, in order to protect the user’s eyes. 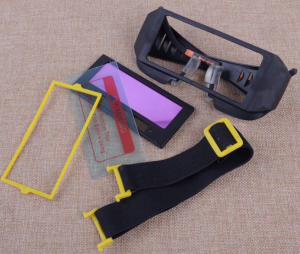 Of course the mask must be disassembled to remove the filter from its enclosure. The purple glass (green on the other side) is a filter that cuts out infrared and ultraviolet emissions, this filter also cuts out some of the light reaching our light detector and it must be removed, this can be done with ease, lifting it with a sharp razor. Without this filter the unbiased optical attenuator passes around 30% of the incoming light and darkens to allow only 1% when driven with a voltage of 5V.
It is also possible to remove the back-side polarizer film using a sharp knife : the remaining device form now a voltage-controlled polarization filter. The image below shows the mask dismantled with LC cell, filter and the electronics (it can be kept because you never know). 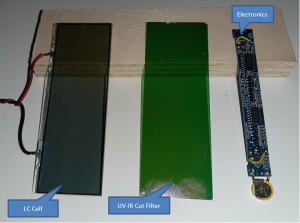 The experimental setup is quite simple. We used our optical bench on which we placed a 632nm He-Ne laser, our liquid crystal cell and a photodiode photometer. The following image shows all the equipment. 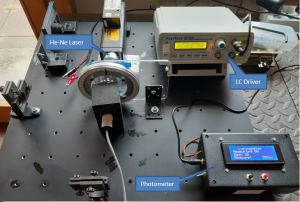 The two images below show the detail of the laser, the rotatable analyzer filter and the photodiode. 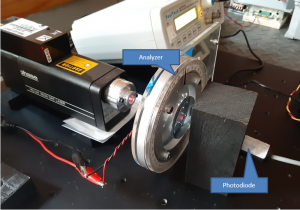 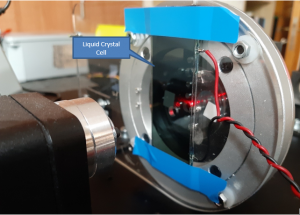 With our experimental apparatus we have made a series of measures on the behavior of the liquid crystal cell.

The first test was the measurement of light transmission (transmittance) as a function of the voltage applied to the cell electrodes. The graph below shows the result: the threshold voltage is approximately 1V and the optical switch is completed for values ​​greater than 2.5V, for which the transmittance is less than 2%.
A voltage step of 5V therefore ensures the transition from 100% transmittance to 0% transmittance. 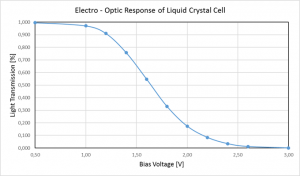 The electro-optical modulation that is carried out with the liquid crystal cell is based on the rotation of the polarization plane of the light, we can therefore think of the LC cell as a device that rotates the polarization according to the applied voltage. We therefore measured the rotation angle produced as a function of the applied voltage. The graph is presented below: you go from an angle of 90° in the absence of voltage to an angle equal to 0° for voltages greater than 2.5V when the molecules are aligned according to the direction of the electric field. For voltage values ​​between 1V and 2V the relationship between angle and voltage is well approximated by a linear trend, as seen in the second graph. 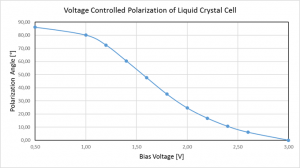 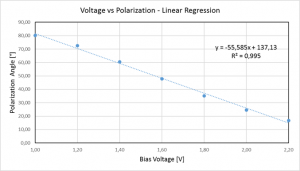 An interesting measure to do is the evaluation of the response times of the LC cell to a voltage step applied to the electrodes. The experiment consists in applying a voltage pulse to the electrodes of the LC cell and measuring the intensity of the transmitted light with the photodiode in order to evaluate the times of variation of the transmittance.
We know that the LC cell is an intrinsically slow device with rather long switching times. It is however interesting to make this measurement and try to make physical observations, even if only of a qualitative nature. The impulse lasts 100ms and amplitude of 5V. The results are presented in the following layouts. 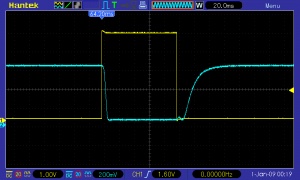 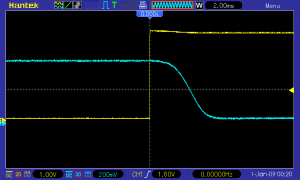 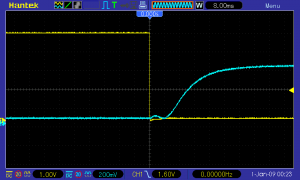 From the details on the rising and falling edges it emerges that the switch-off time is about 6ms, while the switch-on time is much longer, worth about 40ms. In the “switch-off” process, the molecules are forced to align according to the electric field, while in the “switch-on”, when the electric field is reset, the molecules take their natural position.
It is natural that the alignment of the molecules forced by the electric field is faster than their subsequent internal rearrangement, the latter process according to the oscilloscope trace assumes the characteristics of an exponential process : fast in the first section, slower in the part the final.
We can assume that these slow times are mainly due to the viscosity of the liquid crystal and depend on the temperature, the applied electric field and the type of molecule (with greater or lesser polarity).

In our LC cell the maximum frequency of use is only 13Hz, as shown in the following diagram. 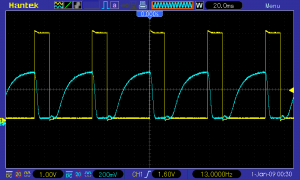