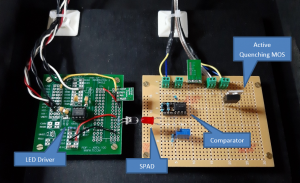 Abstract : In the previous post Using LED as Single Photon Detector we described how a simple LED can be used as a single photon detector (SPAD), now let’s try to make its technical characterization.

To verify the operation of the LED as a single photon detector we used a “dark box”, it is a light-tight box in which we placed the detector and a LED light source that can be controlled from the outside by means of a potentiometer (described in the post LED Dim Light Source). In the image below we see the LED light source, on the left, and the SPAD, made with the red LED, on the right. SPAD was used with active quenching. 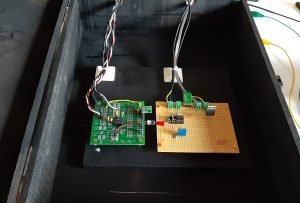 In the image below you can see all the experimental setup: the dark box with SPAD and light source, the driver to generate the SPAD bias voltage (described in Programmable Power Supply for SiPM Bias), the counter that has the function of counting the pulses generated by the detector (described in the PSoC based Photon Counter), a multimeter is used to measure the light intensity which measures the current intensity on the LED. 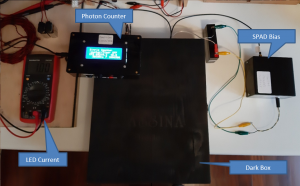 The diagram shown below describes the circuit that we used to drive the LED. With an Op Amp, a constant current generator trimmed with a potentiometer was created. Through the voltage drop on the 1KΩ resistor, the current flowing through the LED diode can be measured and consequently the intensity of the light emission. 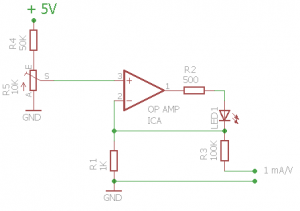 The diagram below shows the circuit used for the generation of the bias voltage of the SPAD. We used the MAX5026 step-up voltage converter which provides a stabilized voltage of 34V with low noise. This voltage is used to power an op amp which then outputs the required voltage, further leveled through two filter capacities. 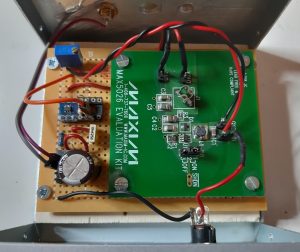 The first measurement was the bias voltage of the SPAD-LED. We have seen that under 22.5V no discharge occurred, starting from 22.5V the LED begins to behave like a SPAD device, producing pulses in the presence of light and, to a lesser extent, even in the absence. These are the so-called “dark counts“, these are events triggered not by photons but caused by the ever-present thermal noise. They are indistinguishable from real events caused by photons and therefore should, as far as possible, be limited to the minimum. These counts depend on the polarization voltage and the temperature of the device. In our case we have seen that the Vbd values ​​go between 22.5 and 23 V, above the dark counts increase exponentially, as shown in the following graph. 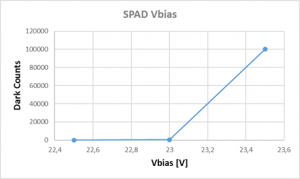 Linearity in the SPAD response

After identifying the optimal polarization voltage, we evaluated the response of our SPAD to different values ​​of light intensity in order to understand the detector response and above all its linearity. For this measurement we used the LED driver described above. The results are good, the detector proves to be able to easily reach the 80-100 KHz counting rate. Linearity is good up to 30-40 KHz, above this value however the counts no longer rise linearly probably due to saturation phenomena in the detector.

Next we examine the fluctuations in the count rate for fixed external conditions of bias voltage and light intensity. The data are shown in the next two charts. The first has 100 msec counting time, the second 10 msec. These data show a reasonable fit to a Gaussian distribution, the second chart follows clearly a Poissonian statistics, because the number of occurrences for each bin is lower.

There is a significantly more sensitive way to test the Poissonian statistics of these pulses. That is, we can examine the distribution of the time intervals between successive pulses. When one creates a histogram of the number of occurrences vs. the time between pulses, we obtain the data shown in the graph below. Note that the data is plotted on a log/linear scale. The exponential relation between the number of occurrences and the time interval is a clear signature of Poissonian behavior.