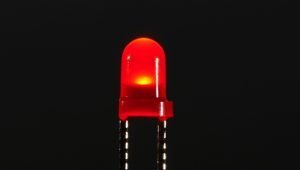 The SPAD (single photon avalanche detector) is a photodiode-like device that works in an operating area that is usually avoided : the breakdown region. A conventional photodiode is usually realized with a reverse-biased p-n junction (a diode) where the photons can interact with silicon and generate electron-hole pairs, mainly because of the photoelectric effect in the visible wavelength range. These pairs are then separated by the strong electric field existing in the depletion area and thus they can reach the electrodes giving rise to a current. In normal photodiodes many photons are needed to have an observable current signal so these devices are not suitable for measuring very low intensity light.

Increasing the reverse bias voltage of the photodiode, but less than the breakdown, the electric field in the depletion area becomes high enough to enable the process of impact ionization, this means that each electron can create others charge carriers, in a multiplication process, and the resulting current will be high enough to be measurable even if the originating photons are few, but still, the behavior is linear-analog : a greater number of photons corresponds to a more intense current. Such a device is called APD (avalanche photo detector).

Increasing further the bias voltage, beyond the breakdown voltage, the avalanche process becomes self-sustained with even higher gains (around 106) and the photodiode becomes a digital device that respond even just to a single photon with a macroscopic current pulse of value independent of the number of initial photons, this device is now called SPAD. Obviously the avalanche current must be somehow limited otherwise the device could be damaged, moreover during the avalanche current the device cannot react to other photon so it is “blind”, hence the need to switch off rapidly the current pulse.

The following image shows the cross section of a typical SPAD with the upper “window” to let the photons enter the active area which is the depletion area between the n+ and p+ layers.

The electrical behavior of the APD – SPAD device could be easily described with the I-V characteristic curve (see the graph below). There are two areas. Below the breakdown voltage Vbd the device operates in a linear way, this is an APD device. Just above Vbd the device operates in the so called geiger-mode and the switching between the On – Off states is triggered by the absorption of a photon. 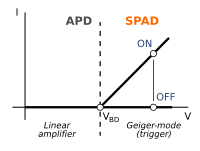 In the diagram below a SPAD basic scheme is shown. In series with the SPAD detector there is a resistor. When the current increases after an avalanche multiplication process, the voltage drop on the resistor increases and consequently the bias voltage on the SPAD drops below Vbd causing the avalanche current to turn off. The voltage on the resistor shows a pulse which can produce a squared pulse which is the indication that a photon has triggered the process. 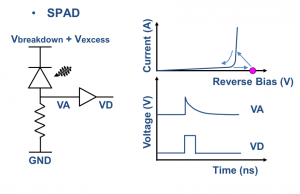 The SPAD in practice works as a detector of single photons and the measurement of the intensity of light that hits the device is made through the frequency of the pulses produced (count rate). Hence the need to shorten the duration of the single pulse as much as possible in order to allow higher counting frequencies.

SPAD devices are quite expensive and often require rather high operating voltages (100-200V), however there is a low-cost alternative suitable for use for educational purposes to carry out some experiments : it is the LED! LEDs in fact have a structure similar to SPAD and, suitably polarized, they can also function as a single photon detector.
In our tests we used a gallium phosphide-arsenide (GaAsP) LED with red light emission, this is a rather common type of LED. However, not all LEDs work the same, it was necessary to do some tests before finding a suitable model. The image below shows the base with the LED and the accessory components necessary to make the different circuit configurations that we have adopted. For our LED we have found that a bias voltage to enable the operation as SPAD is around 22.5V. 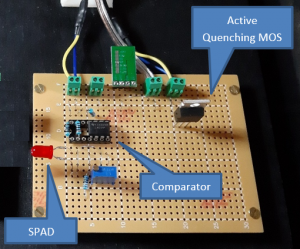 The simplest configuration to use a SPAD is that which uses a resistance in series with the device in order to turn off the discharge current. This configuration is known as passive quenching. In practice, two resistors are used, one for bias and one for quenching, as shown in the diagram below. 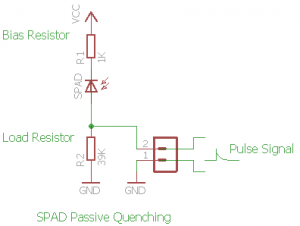 When the current following the triggering of the avalanche begins, the resistances limit the discharge current and, as the current increases, decrease the voltage on the SPAD to levels below the Vbd value, with the effect of turning off the discharge.
The quenching resistance value is between 10KΩ and 100KΩ, values ​​lower than 10KΩ do not allow to turn off the discharge, while values ​​higher than 100KΩ lengthen the switch-off times. In fact, it should be considered that the shutdown of the discharge follows an exponential curve guided by the time constant RC, where R is the quenching resistance and C is the capacity of the SPAD junction (in our case of the LED).
In the layout below you can see a typical impulse that is obtained with our LED, with a 39KΩ quenching resistance, from the impulse shape it is possible to estimate a junction capacity of about 150pF. 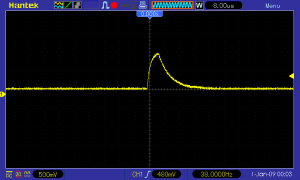 In the previous paragraph we saw that with passive quenching it is not possible to reduce the duration of the pulse beyond a certain value. Reducing the quenching resistor has the effect of reducing the pulse duration, but beyond a certain value it no longer has the effect of turning off the discharge because the voltage drop on the resistor becomes too small.
The alternative is to adopt a different technique, known as active quenching.
In active quenching an element is used to quickly detect the discharge, in practice an operational amplifier used as a comparator. the signal produced by the amplifier is used to drive the gate of a CMOS which, when in conduction, resets the polarization voltage of the SPAD and thus turns off the discharge. The configuration adopted is shown in the following diagram. 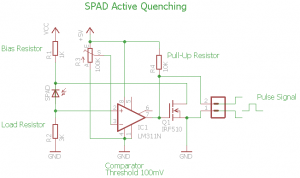 With the active quenching technique it is possible to significantly reduce the duration of the pulses in order to increase the counting rate. In our case, we easily reached a duration of the order of 2-4 μsec which corresponds to a maximum counting frequency of 250-500 KHz. The traces shown below show the impulses on the load resistor, in yellow, and the impulses produced by the comparator, in blue. 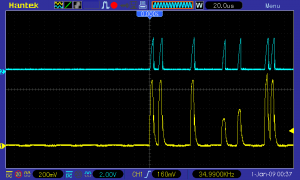 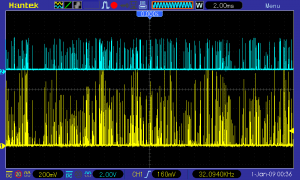 The SPAD device shows the phenomenon of After-pulsing. During an avalanche, charges may be trapped inside deep levels and then released afterward. This causes additional correlated avalanches that are described by the probability of After-pulsing occurrence. The trace below shows an example of after-pulsing. 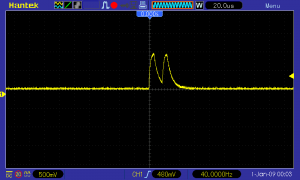