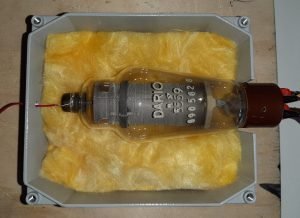 With a triode for high currents (known as Thyratron) it is possible to reproduce, albeit in a simplified manner, the famous Franck – Hertz experiment of 1914, which provided one of the first direct tests of the quantized model of atomic energy levels.

The experimental apparatus used by Franck and Hertz consisted of a tube containing a low pressure gas (for example mercury gas), with three electrodes inside : a cathode with a thermionic emission of electrons, a grid of acceleration and an anode (or collector), placed at a slightly lower potential than the grid, but still positive with respect to that of the cathode. By means of suitable instruments the potential differences between cathode and grid could be varied and the current between the two electrodes was measured.

The idea behind the experiment is that, in the collision between the accelerated electrons and the atoms of the gas, the kinetic energy is absorbed by the atoms only if it is equal to the difference between two energy levels which, according to the model by Bohr, it has a finite and discreet value.

The following image shows the diagram of the Franck – Hertz tube and the voltage – current graph that is obtained. With the cathode-grid acceleration voltage, the energy of the electrons E = eV could be controlled, while with a picoammeter (or millivoltmeter with high sensing resistance) we measure the current that depends on the acceleration voltage and on the interaction of the electrons with the atoms of gas.

From the graph it can be seen how the current does not follow an increasing trend with the voltage but instead presents accentuated minima when the average kinetic energy of the electron is sufficient to excite the atom to the next energetic level : in these conditions the electron undergoes an inelastic collision and all its energy is absorbed by the atom, the electron cannot reach the anode and the current therefore has a minimum. When instead the energy of the electrons does not correspond to a defined energetic gap, the collisions are elastic and do not give effect on the anodic current.

The image below shows the basic diagram of the connection circuits. The cathode is heated by a filament. A variable acceleration voltage (grid positive) is set between the cathode and the grid. A picoammeter is placed on the collector circuit to measure the current, the collector is kept at a slightly negative voltage with respect to the grid so as to collect only the electrons with energy above a certain threshold.

The setup of the experiment is based on the model 5559 thyratron (available quite easily online). An equivalent model could also be used, but it is important that it contains mercury, which is fundamental for the purpose of the experiment. In this regard it is necessary to pay attention to this device, it is necessary to handle it with care and, in the event of breakage, avoid breathing toxic fumes, during operation the tube heats up and reaches a temperature higher than 100 ° C, therefore pay attention to not burn your hands !

A retarding potential of 1.5 V is placed between the anode and the grid. The anode current is measured by measuring the voltage on the 1 MΩ sensing resistance: in practice 1 V = 1 μA. An acceleration potential is applied to the cathode, from 0 to 10 V in the form of a rising ramp produced by a signal generator.

The diagram below, taken directly from the thyratron datasheet, shows the component pin-out. Note that the anode is the metallized part in the upper part of the tube; grid, cathode and filament are connected on the lower connector, filament and cathode are connected to each other inside the tube. 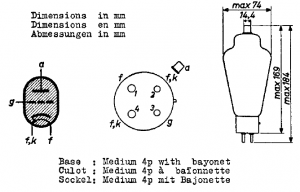 To replicate the Franck – Hertz effect, however, it is necessary that the quantity of mercury in the gaseous state is greater, for this reason it is necessary to bring the temperature of the tube up to about 120 °C. To heat the tube and control its temperature, the commercial apparatuses use a thermostatic furnace, but in our simplified case we adopt the “trick” of thermally isolating the tube (proposed by Trevelyan in “Discovering the Quantum”), placing it inside a box covered with rock wool : the result can be seen in the initial image of the post.
Thanks to the insulation, during the experiment the temperature of the tube will gradually increase, for this reason it is necessary to control it with a temperature sensor and avoid it exceeding 120 °C (the tube is not made to work at these temperatures and therefore must be controlled). To measure the temperature we used the digital multimeter connected directly to a thermocouple (many multimeters have this feature).

The image shows the complete setup for the experiment. 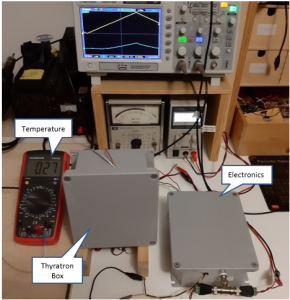 The following image shows the electronic part, very simple in reality, with highlighted the battery that provides the retarding voltage between the grid and the anode. 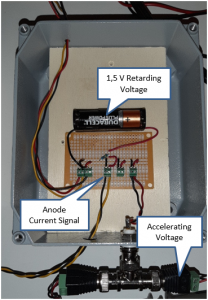 The experiment was conducted by driving the cathode with a voltage ramp produced by the function generator, a frequency value that is not a sub-multiple of the main frequency, for example 20 Hz, should be chosen in order to avoid disturbances. The cathode must be negative with respect to the grid, so the positive pole of the signal generator must be connected to the grid and the negative pole to the cathode.

With the oscilloscope the voltage drop on the 1 MΩ resistor present in the grid-anode circuit is measured and displayed. This voltage is proportional to the anode current. The signal produced by the function generator must be adjusted, with offset, so that the range is 0 – 10 V. For convenience on the oscilloscope the traces have been inverted so as to obtain positive increasing ramps. In addition, the average function on n samples was applied to the signals, in order to reduce noise and disturbance.

The series of six images below shows the trend of the anodic current as the tube temperature increases. In the first two screens the current is low because the filament is still heating up. The third image shows the current at its maximum at the normal operating temperature of the tube.
As the temperature increases, the pressure of the mercury gas in the tube increases, this causes a reduction in the current and the formation of an evident minimum immediately after the value of 5 V : this is due to the inelastic collisions between electrons and mercury atoms which, following the collision, reach the first level of excitation (the energy gap is 4.9 eV).

The following screen shows instead the detail of the anode current and voltage, in the normal operating mode, at about 50 – 60 °C. The anode current is related to the voltage by a power law. 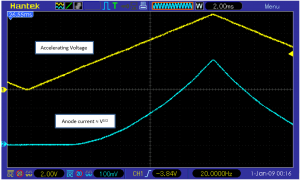 The following screen shows the current dip that occurs when the tube temperature is around 120 °C. The current drop occurs starting from 4.9 V, in good agreement with the value of the energy gap for the mercury atom. 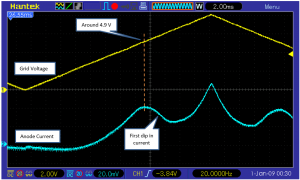 Triodes of this type are no longer used in modern electronic equipment. However, in online markets, mercury thyratrons can still be found. These allow us to partially replicate the experiment of Franck – Hertz without having to spend hundreds or thousands of euros for the purchase of the special tube !