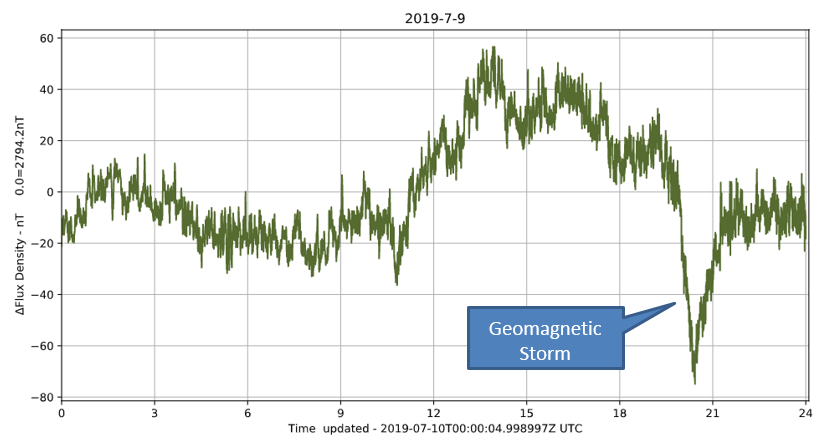 In the picture above an example of a geomagnetic storm detection.

With the equipment described in the posts : Fluxgate Magnetometer, Geomagnetic Field we have created a small geomagnetic observatory and in this page we insert the real-time data read by the system and some analysis examples.
The sensor has been positioned, parallel to the East-West direction, inside a cellar, away from anthropic disturbances, such as moving cars. The data is collected by a Datalogger consisting of a Raspberry PI system. The python application that reads the data, also performs a first processing of the same and produces the graphs showing the trend of the magnetic field intensity.

The following graph shows the trend of the signal measured directly by the sensor with a rate of one measurement per second. No processing or filter was applied to the signal.
Generally there is a certain “noise” in the order of about 10 nT due to both the characteristics of the sensor and the residual anthropic disturbances. 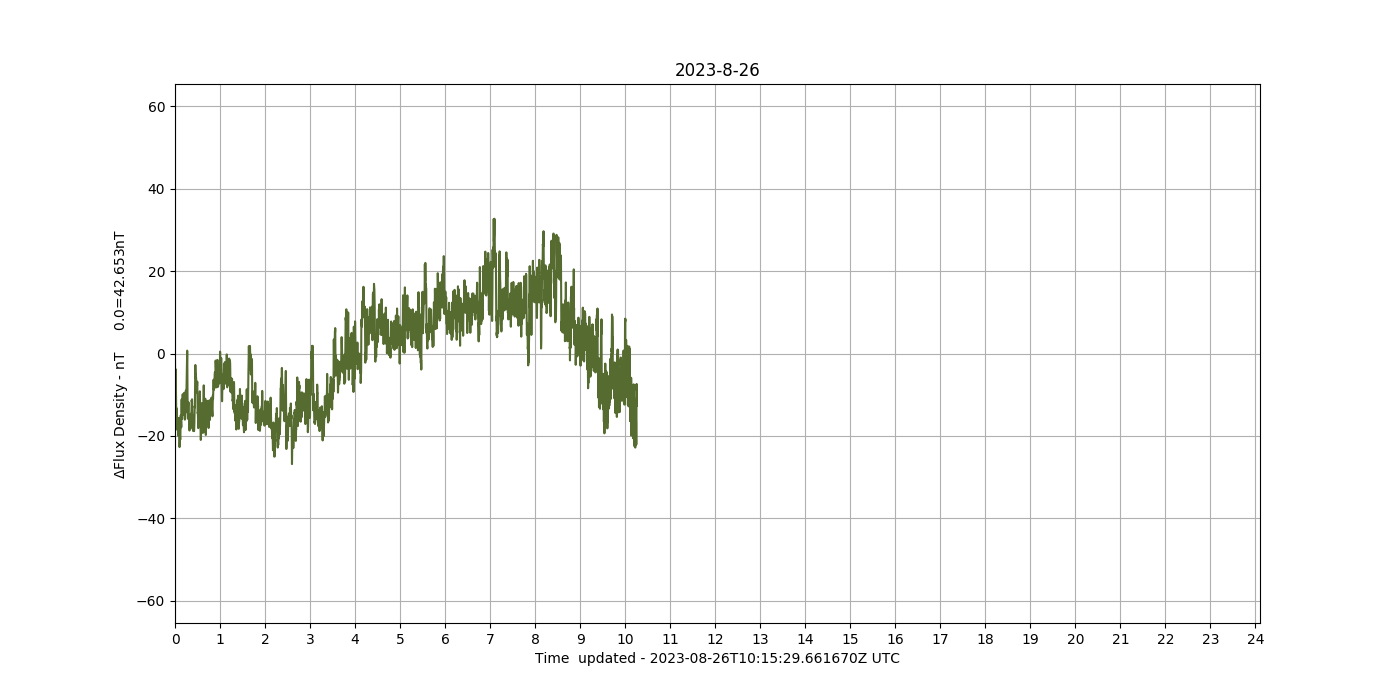 The graph below shows the signal after it has been filtered with a low-pass butterworth filter with a cutoff frequency of 0.01 Hz which corresponds to a period of 100 s. In this way we clean the signal from high frequency statistical variations.
The filtering was carried out thanks to the features present in the python scipy library, as shown in the following python code extract. 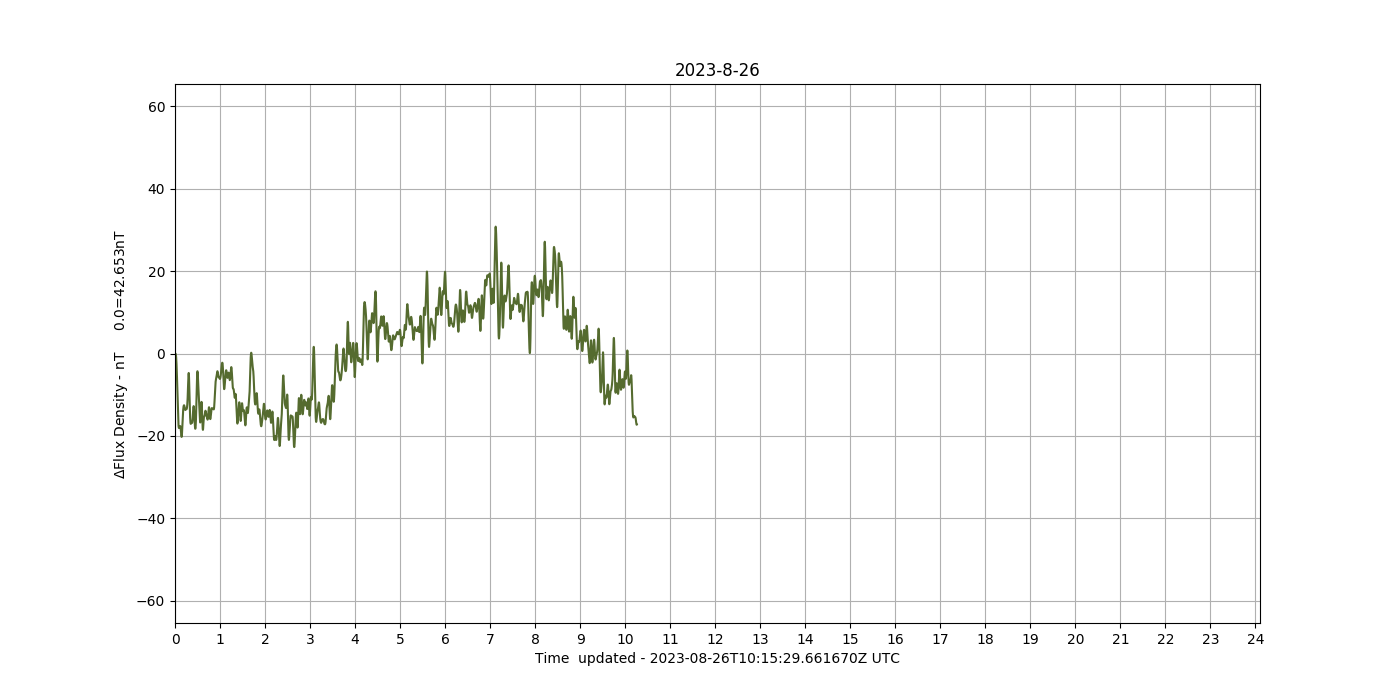 Temperature of the FGM Sensor

The response of the FGM sensor is dependent, to a greater or lesser extent depending on the model, by temperature variations. For this reason, the temperature of the sensor is also measured and acquired, so as to ensure that it remains constant throughout the measurement period. 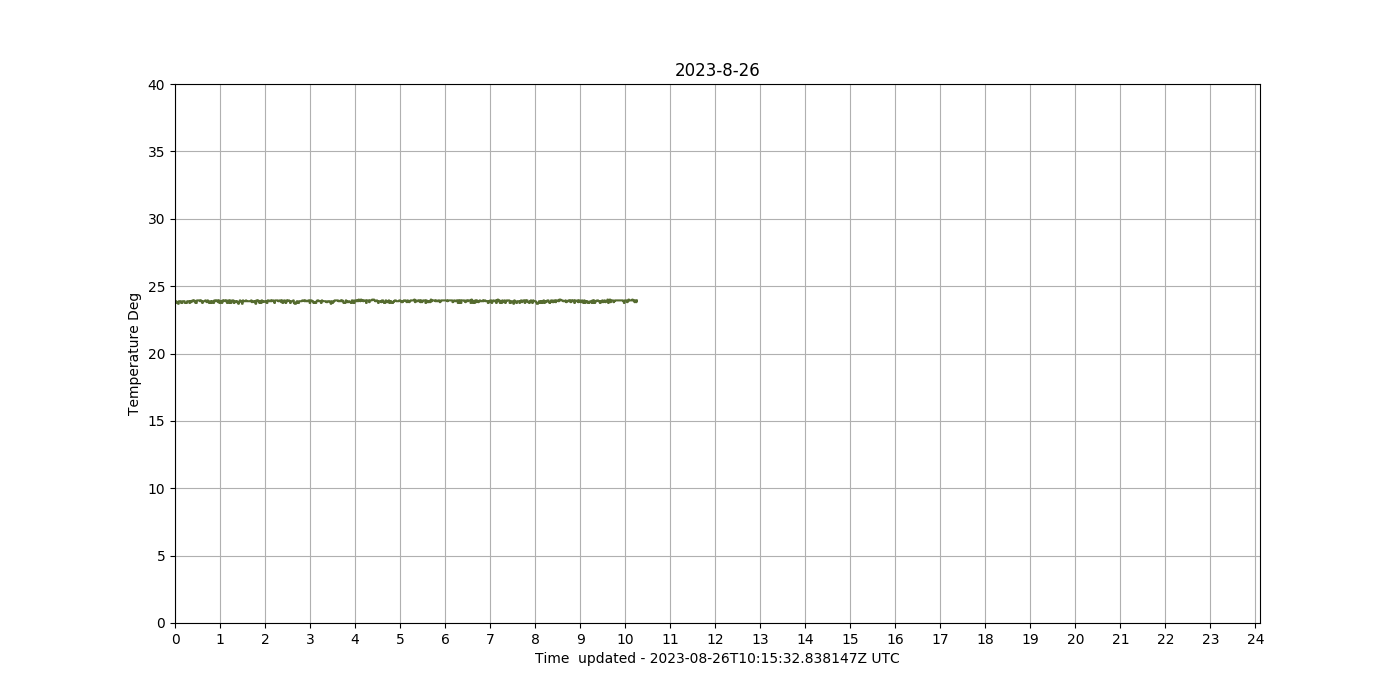 Influence of Solar Activity on Geomagnetism

The geomagnetic field is not constant but is subject to numerous variations both periodic and non-periodic.
The long-term variations, which occur on a time scale greater than 5 years (secular variations), are caused by the dynamics inside the Earth, while the short-term variations, much more intense, have an external origin and manifest themselves on a scale time of seconds, minutes or days.
The latter are mainly produced by electric currents due to charged particles moving in the magnetosphere and in the ionosphere.
These variations include periodic ones (called regular variations) due to the rotation and orbital movements of the Earth, the Moon and the Sun and those transients caused by the interaction of the solar wind with the magnetosphere.

In the event that there are no phenomena due to intense solar activity, the trend of the geomagnetic field follows a trend with characteristic daily variations with a periodicity of 24 hours.
The phenomenon begins with the electromagnetic radiation emitted by the Sun. In addition to illuminating and heating one side of the earth, this radiation also heats the ionosphere causing convection. The convection moves the charged particles through the earth’s magnetic field creating a dynamo action that guides the ionospheric electric currents above the equator and up to medium latitudes. These currents produce a magnetic field which, seen from space, appears fixed on the side of the earth’s day. The rotation of the earth brings a site on the surface inside and outside of this magnetic field creating a 12-hour variation and then a 24-hour cycle.

The “real-time monitoring” of the geomagnetic field also aims to identify the so-called Geomagnetic Storms.
These are irregular and sudden variations in the intensity and direction of the earth’s magnetic field, usually accompanied by other geophysical phenomena (eg the polar auroras). The intensity and direction of the field, while fluctuating in an apparently disordered manner, vary, during a storm, according to well-defined temporal trends.
Two phases are distinguished: the initial phase, with a duration of 1 to 10 hours, in which the horizontal component (H) of the magnetic induction undergoes an increase of 10 ÷ 50 nT, and the main phase, of the duration of one or more days, when H first decreases, reaching a minimum (generally, of 100 ÷ 200 nT below the normal level), and then slowly recovers, returning to the original values.
Magnetic storms are produced by clouds of plasma expelled by the Sun; explosive phenomena, such as solar flares, produce an abrupt start to the storm. Due to the impact of the fast plasma cloud, the magnetosphere is abruptly compressed, so that the magnetic field on the earth’s surface increases (initial storm phase).
In the bands of radiation that surround our planet, charged particles are subsequently injected; this has the effect of intensifying the so-called ring current, produced by the longitudinal motion of the trapped particles. Since this current circulates, in the equatorial plane, in the sense that it goes from east to west, the magnetic field that it produces inside is opposite to the geomagnetic one: hence the decrease of H observed in the main phase of the storm. The particles injected into the radiation bands are then gradually dispersed, so that the intensity of the ring current returns to ordinary values ​​and the storm ends.

Magnetic storms have significant effects on the terrestrial environment, in particular disturbing effects for radio communications, especially in the high-frequency band.

When a coronal hole is positioned near the center of the solar disk and facing the Earth, these hot gases flow towards the Earth at a higher speed and can cause geomagnetic disturbances on Earth with greater auroral activity at high latitudes, depending on the size and position of the coronal hole on the solar disk.

The images below show an example of coronal hole and the relative geomagnetic storm caused by the increase of the solar wind. 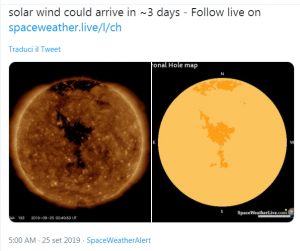 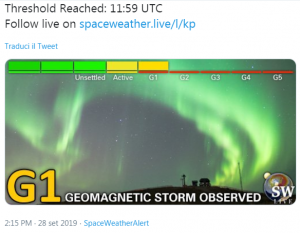 Our magnetometer has perfectly detected the geomagnetic disturbances that have occurred. The graph below shows the irregular trend, with numerous maximums and minimums, recorded during the phenomenon.

The same coronal hole appeared again the following month, after a complete solar rotation, and gave rise, also in this case to a geomagnetic storm of G1 degree. The images below show the photo of the sun taken from the satellite and the geomagnetic field trend. 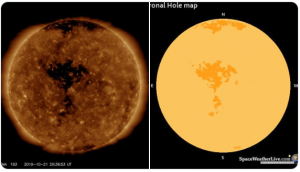