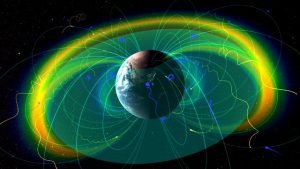 The geomagnetic field is a natural physical phenomenon present on the planet Earth. It is similar to the magnetic field generated by a magnetic dipole with non-static magnetic poles that do not coincide with the geographical ones, and with an axis inclined at 11.30 ° with respect to the earth’s rotation axis. The hypotheses on the origins of this field are numerous, but today the theories are oriented towards a model analogous to that of a self-excitation dynamo.

The image below depicts the evolution of the earth’s magnetic field, in direction and intensity, in relation to the geographical poles. 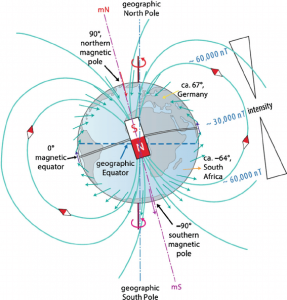 The components of the Geomagnetic Field

The Earth’s magnetic field is a vector field represented by a vector, a function of the observation point and time, generally indicated by F. Introducing a Cartesian triad with origin in the place of observation and oriented axes as in the figure, we define the following magnetic elements : 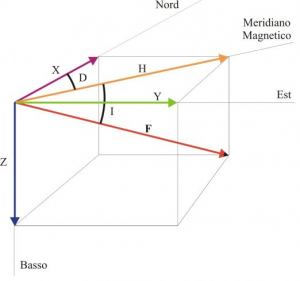 In our measuring point the geomagnetic field calculated according to the most accredited models is given by the following values :

The Fluxgate magnetometer described in the previous post Fluxgate Magnetometer, is an instrument suitable for the measurement of the earth’s magnetic field. After calibrating the sensor we tried to measure the X, Y and Z components of the geomagnetic field, as explained in the previous paragraph, positioning the sensor in the horizontal directions North and East and vertically, alternately in the two directions and making the average of the values ​​obtained. The results are shown in the following table :

Of course it is not a precision measure because the sensor is very sensitive and it is not easy to position it with the due precision according to the geographical directions, the results are however quite close to the values ​​foreseen by the theoretical model.

The geomagnetic field is subject to numerous variations, some of which are regular and cyclical, while others are aperiodic and depend largely on the interaction between the magnetosphere and the solar wind produced by solar activity. The latter are known as solar storms and are also the cause of the aurora phenomenon.

The fluxgate sensor, with its sensitivity and its measurement range, can be conveniently used to monitor the geomagnetic field. For measurements on long times, however, it is necessary to position the sensor in points not subject to artificial variations of the magnetic field, far from power lines and from moving ferromagnetic objects, such as cars; furthermore the sensor should be kept at a constant temperature. It is not easy to find a position that meets all these requirements. We placed the sensor in a cellar about 20 meters from the moving machines in a thermally insulated container. Furthermore we have included a temperature sensor, the DS18B20, which is also interfaced with the PSoC, in order to record any changes in the temperature of the sensor.

The images below show the setup used for positioning the FGM sensor. The sensor is placed between a few layers of styrofoam that acts both as a protection and as a thermal insulator, the 5V regulator is placed next to the sensor, everything is inserted inside an electrical plastic junction box. The 12 V power supply is connected to the junction box and the signal is collected from the FGM sensor and from the DS18B20 temperature sensor. 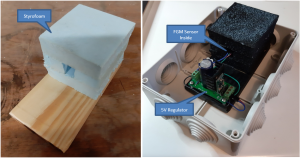 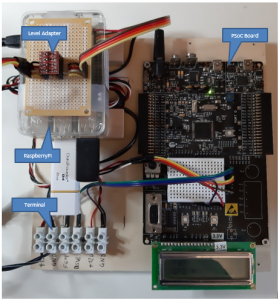 The acquisition unit was placed inside a wooden container, as shown in the image below, in which you can see the 5V power supply for the Raspberry and the 12V unit for the PSoC board + sensors. 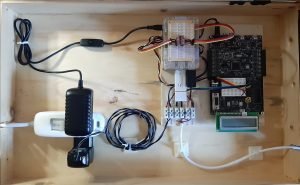 For the geomagnetic field monitoring it is convenient to use the most linear part of the FGM sensor response, the one included in the range -20000 nt ÷ +20000 nT. The X (horizontal North) and Z (vertical) components have a magnitude greater than 20000 nt, while the component along the East – West direction has an amplitude of the order of 2000 nT, so it is the most suitable to be monitored by the FGM sensor: for this reason the magnetometer was placed parallel to the East – West direction.

For the data acquired by the Raspberry and for the subsequent processing and visualization on the graph we used the python software developed for the project Aurora Monitor.

The graph below shows the trend of the geomagnetic field (in the horizontal component aligned along the East-West direction) measured during the 24-hour period. The sampling frequency is one sample per second (1 Hz), no filter type has been applied to the data, if not the translation with respect to the average value in order to facilitate the visualization. The measurement days were characterized by sun in quiescent state.

The graph is characterized by a maximum around 6 UTC and a minimum around 13 UTC, this trend is repeated cyclically with a period of 24 hours. This cyclical trend with an amplitude difference of about 40 – 80 nT is typical and is part of the so-called short-term variations.
The long-term variations, which occur on a time scale greater than 5 years (secular variations), are caused by the dynamics inside the Earth, while the short-term variations, much more intense, have an external origin and manifest themselves on a scale time of seconds or minutes, mainly produced by electric currents due to charged particles moving in the magnetosphere and in the ionosphere. These variations also include periodic ones (called regular variations) due to the rotation and orbital movements of the Earth, the Moon and the Sun.

The phenomenon begins with the electromagnetic radiation emitted by the Sun. In addition to illuminating and heating one side of the earth, this radiation also heats the ionosphere causing convection. The convection moves the charged particles through the earth’s magnetic field creating a dynamo action that guides the ionospheric electric currents above the equator and up to medium latitudes. These currents produce a magnetic field which, seen from space, appears fixed on the side of the earth’s day. The rotation of the earth brings a site on the surface inside and outside of this magnetic field creating a 12-hour variation and then a 24-hour cycle. 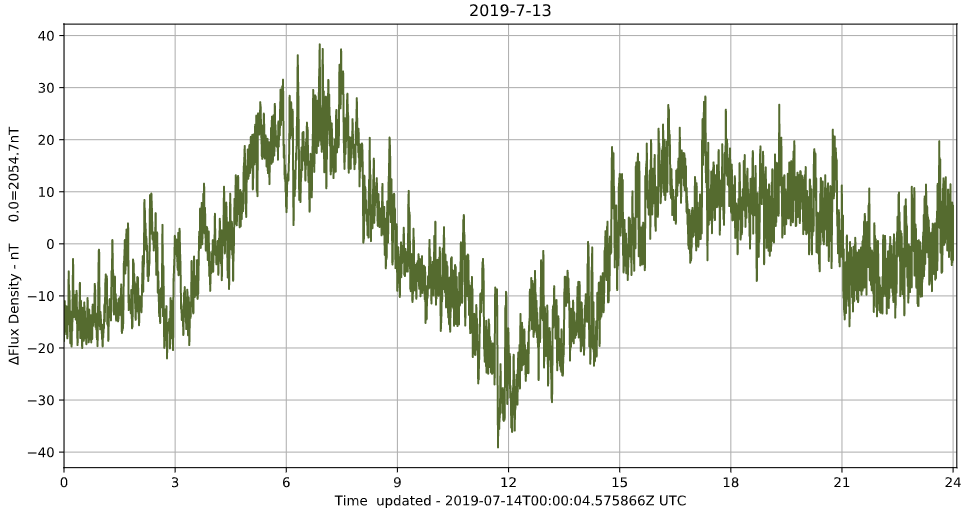 As a check, the sensor temperature trend is also acquired, in order to verify that any changes in the magnetic field are not due to temperature variations. The graph below shows the typical trend of temperature during a measurement day : it can be seen how the temperature remains practically constant. 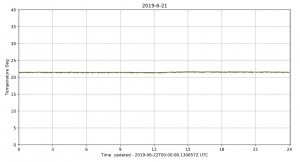 The data are stored in MiniSEED format (mseed), a file is produced for each measurement day. The MiniSEED format is a subset of the more detailed SEED format (Standard for the Exchange of Earthquake Data), which was created with the aim of standardizing the exchange of data, relating to the seismological field, among the various scientific communities. Of course our data are not related to seismic events but they have the same requirements in terms of processing.
For data processing we use in particular the Python ObsPy library: ObsPy is an open source project dedicated to providing a Python framework for processing seismological data. It provides parsers for common file formats, clients to access data centers and seismological signal processing routines that allow the manipulation of seismological time series.
The graph below shows the trend of the field recorded for 5 days, in which we see the cyclical trend with a period of 24 hours.