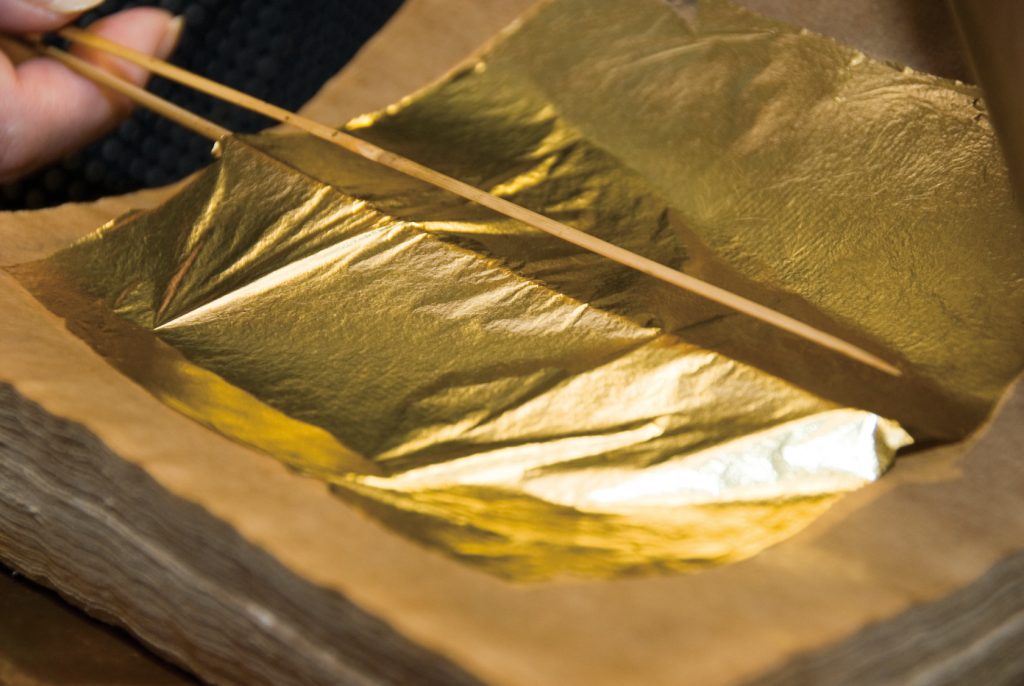 With the knowledge of the theory of the interaction of alpha particles with matter it is possible to measure with precision the thickness of a very thin gold foil.
In this experiment the principal concern will be the specific ionization and rate of energy loss, dE/dx, of an alpha particle as it passes through matter, particularly we deal with alpha particles passing through thin gold foil.

Alphas from natural sources typically have energies in the range of 3 to 8 MeV. The alpha is a relatively massive nuclear particle compared with the electron (about 8000 times the mass of the electron). When an alpha particle goes through matter it loses energy primarily by ionization and excitation. Since the alpha particle is much larger than the electron with which it is interacting, it travels through matter in a straight line. The energy required to strip one electron from a gas typically lies between 25 and 40 eV. For air, the accepted average ionization potential is 32.5 eV. The number of ion pairs that are theoretically possible can therefore be calculated easily. 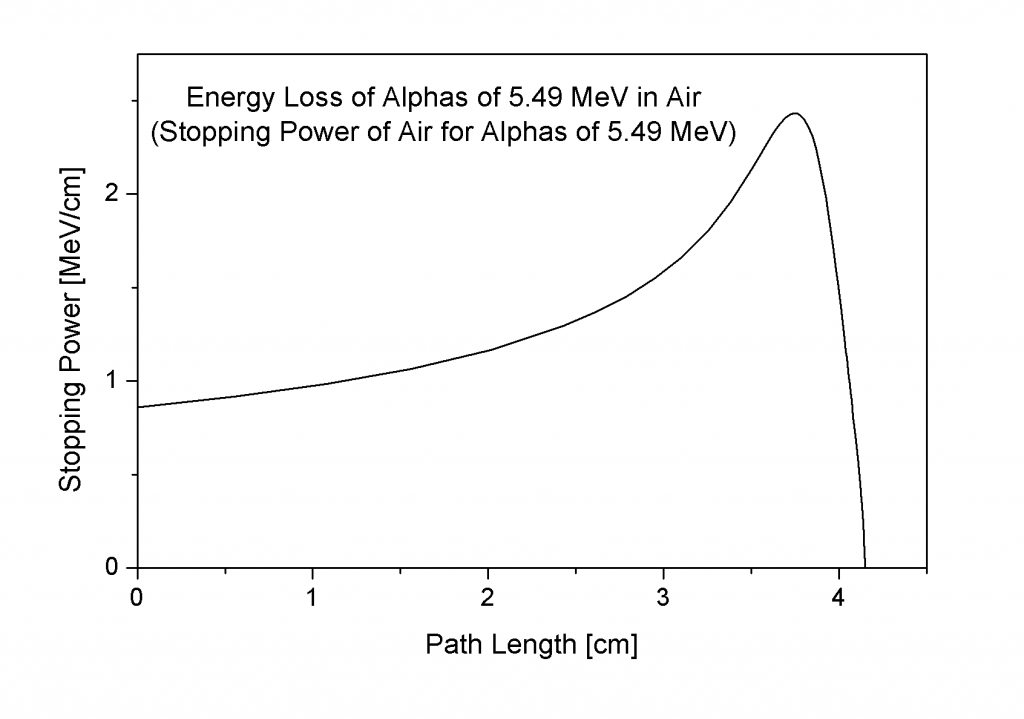 Specific ionization is defined as the number of ion pairs produced per unit of path length. Specific ionization is energy dependent. The reason for this energy dependence is that it affects the rate of travel through the material that is being ionized; lower energy alpha particles spend more time per unit of path length than do the higher energy particles.

The image shows a typical Bragg curve for alpha particles in air.

The Bragg peak is a pronounced peak on the Bragg curve which plots the energy loss of ionizing radiation during its travel through matter. For protons, α-rays, and other ion rays, the peak occurs immediately before the particles come to rest. This is called Bragg peak, after William Henry Bragg who discovered it in 1903.
When a fast charged particle moves through matter, it ionizes atoms of the material and deposits a dose along its path. A peak occurs because the interaction cross section increases as the charged particle’s energy decreases. Energy lost by charged particles is inversely proportional to the square of their velocity, which explains the peak occurring just before the particle comes to a complete stop. In the upper figure, it is the peak for alpha particles of 5.49 MeV moving through air.
The phenomenon is exploited in particle therapy of cancer, to concentrate the effect of light ion beams on the tumor being treated while minimizing the effect on the surrounding healthy tissue. 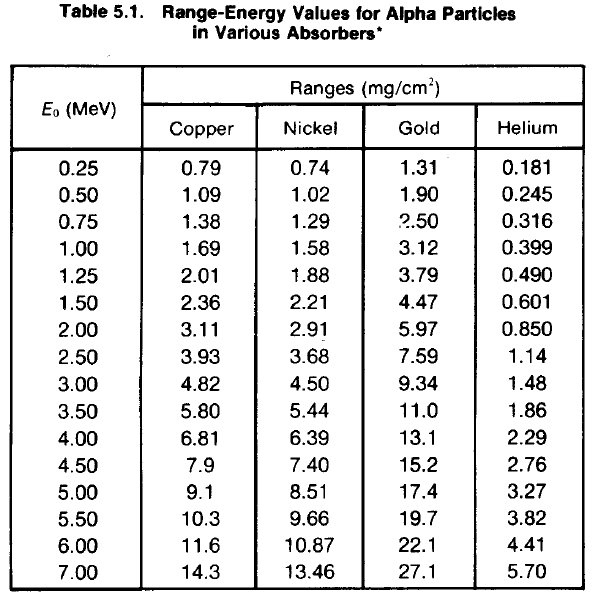 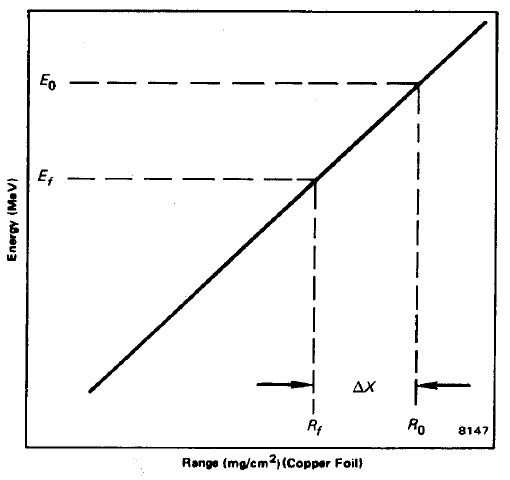 From these theoretical data and measuring the energy of the alpha particles before and after their passage through a layer of material it is possible to obtain easily the thickness of the material crossed by the particles layer. The figure shows graphically the process, you have to make the measurement without the material layer, then repeat the measurement interposing between the source and the detector a layer of thickness dx (for example nickel, copper, gold). Graphically or with the fitting equation you can obtain the ranges corresponding to the two measured energies. From the difference of the values it is obtained the thickness of the material layer : dx = R0 -Rf 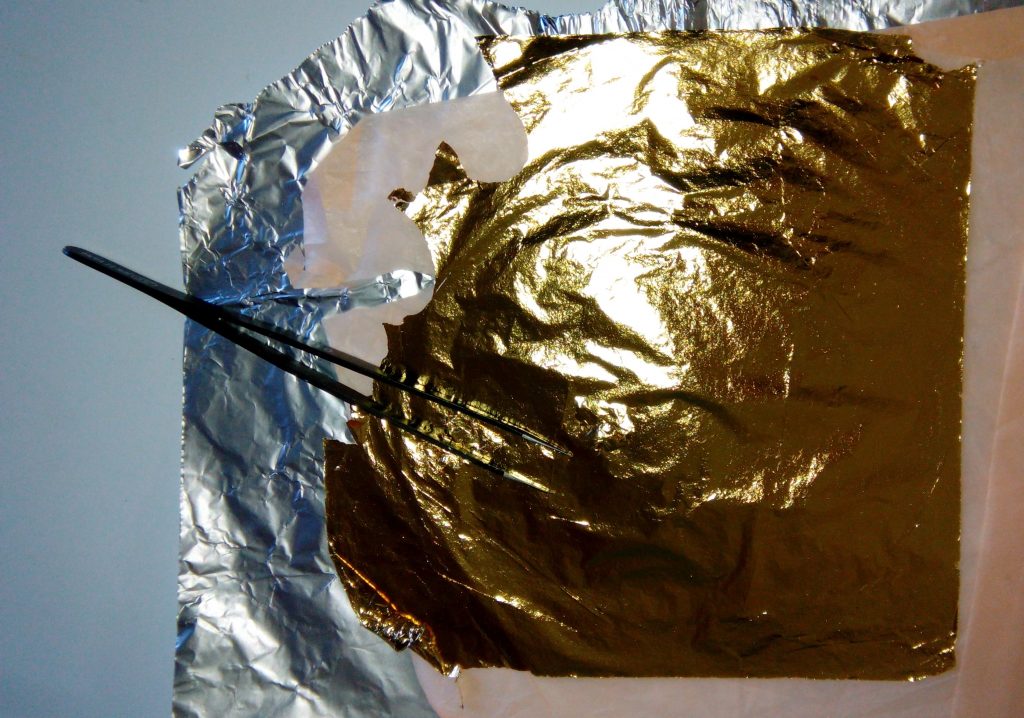 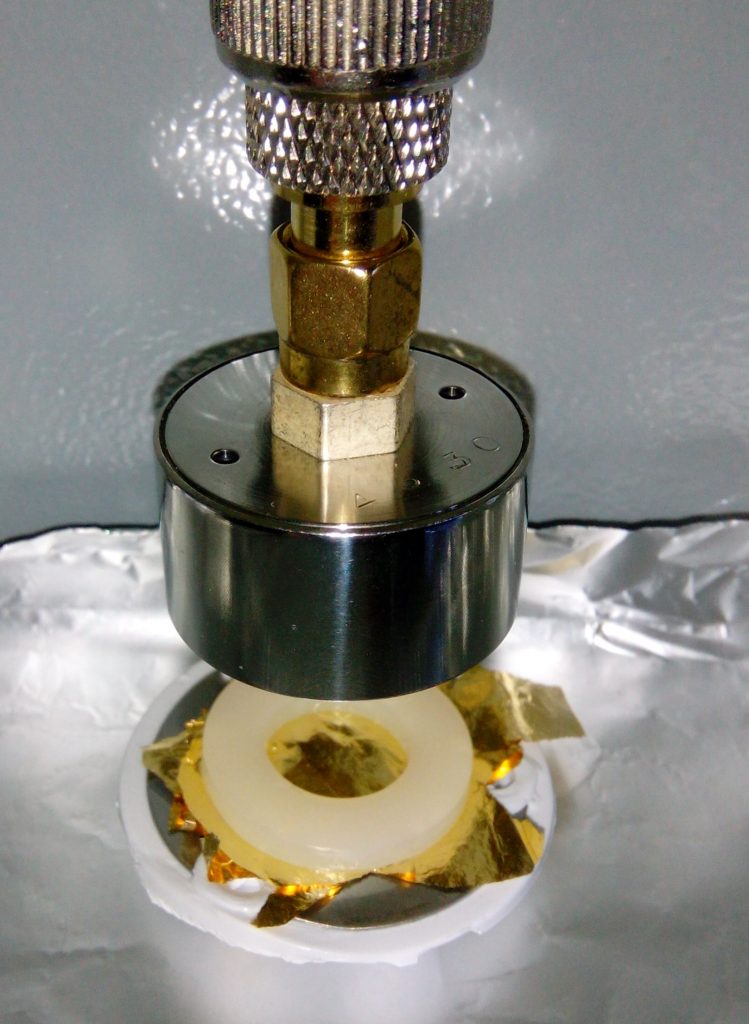 In the images above you can the gold leaf used for thickness measurements. This is the gold leaf used for decorations, it is extremely thin and should be handled with great care otherwise very easily torn, turned against light appears almost transparent. Three measurements were made. In the first was acquired the alpha spectrum of americium source, in the second was acquired the alpha spectrum interposing between the source and the detector four layers of gold leaf, in the third were interposed six gold leaf layers. In the figure to the right you see the detector with americium source and the gold leaf placed on the source.

The graphs below show the results of the three measures.

In the following table the results of the three measures are summarized: