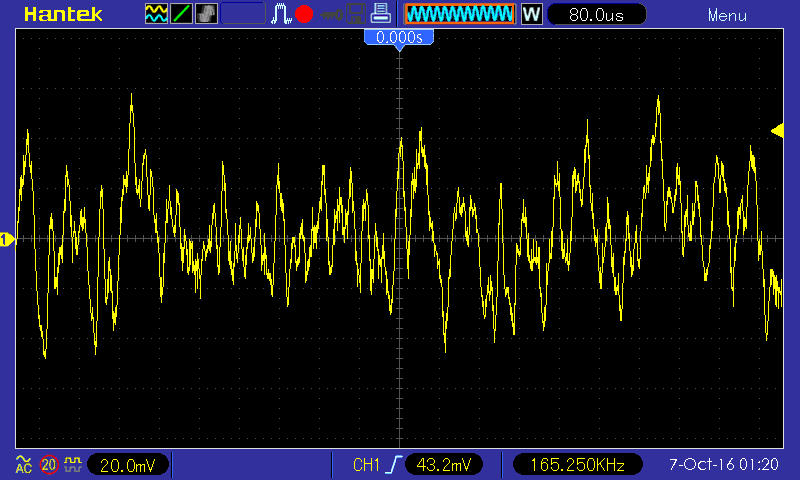 When designing and building an electronic apparatus, especially when it is necessary to acquire and process weak signals, generally one follows all precautions in order to eliminate or at least reduce the electronic noise as much as possible in order to maximize the signal – noise ratio (S / N). The electronic noise is therefore something unwanted that must be reduced if not totally eliminated.

In this post we deal instead of just electronic noise, and especially of thermal noise (Johnson noise) with the aim of measuring and analyzing it, highlighting the statistical nature of this type of noise and obtain an esteem of the Boltzmann Constant Kb.

Thanks to experimental and theoretical studies activities (1928) conducted at Bell Labs, Johnson and Nyquist discovered that at the terminals of a resistor with resistance R, at a temperature T (Kelvin degrees), it develops a random voltage Vn(t) with rms value (Vrms) given by the expression :

Thus, in the hypothesis of stationarity (constant temperature), indicating with Vn (t) the thermal noise voltage, as a result of the central limit theorem, it can be interpreted as a zero-mean signal, E{Vn ( t)} = 0, and with instantaneous amplitude described by the Gaussian probability density.

The merit of Johnson, with its experimental activities, was to identify the properties of the thermal noise parameter σ2 , particularly :

The merit of Nyquist, with his studies on thermodynamics and quantum mechanics, was to confirm theoretically what was observed by Johnson, obtaining the expression of the thermal noise power density spectrum in the conditions of a unit resistance load.
Within the frequency limits of all telecommunications systems, the spectrum of the thermal noise power density can be considered constant at different frequencies : for this reason it is known as white noise.

The direct measurement of these voltage poses three main problems:

To obtain the required characteristics, the noise measurement system that has been adopted is based on three stages:

The system is based on the JCan project of Gellerlabs, described in the following article : jcan-nv-article.

In the image below it is shown the noise amplification circuit scheme. The resistor is placed between Rut terminals (Resistor under test). Among the Rp terminals there is the possibility of inserting a second resistor (Resistor power), so as to evaluate the electronic noise even in the presence of a current (shot noise + noise resistor). The amplifying circuit is powered by a pair of 9V batteries, so as to provide a symmetrical and dual voltage +9V and -9V without any ripple. The amplified output signal is taken from terminal Vout.
To eliminate noise due to RF interference, the circuit must be placed inside a metal box, the output signal must be collected on a BNC connector using shielded cable and connection wires must be as short as possible to prevent them behave like small aerial.

In the images below you can see the amplifier mounted on its PCB and attached to the lid of the canister, notice the BNC connector and the two 9V batteries for power supply. On the left of the PCB there are the terminals for the insertion of the resistors in the test. 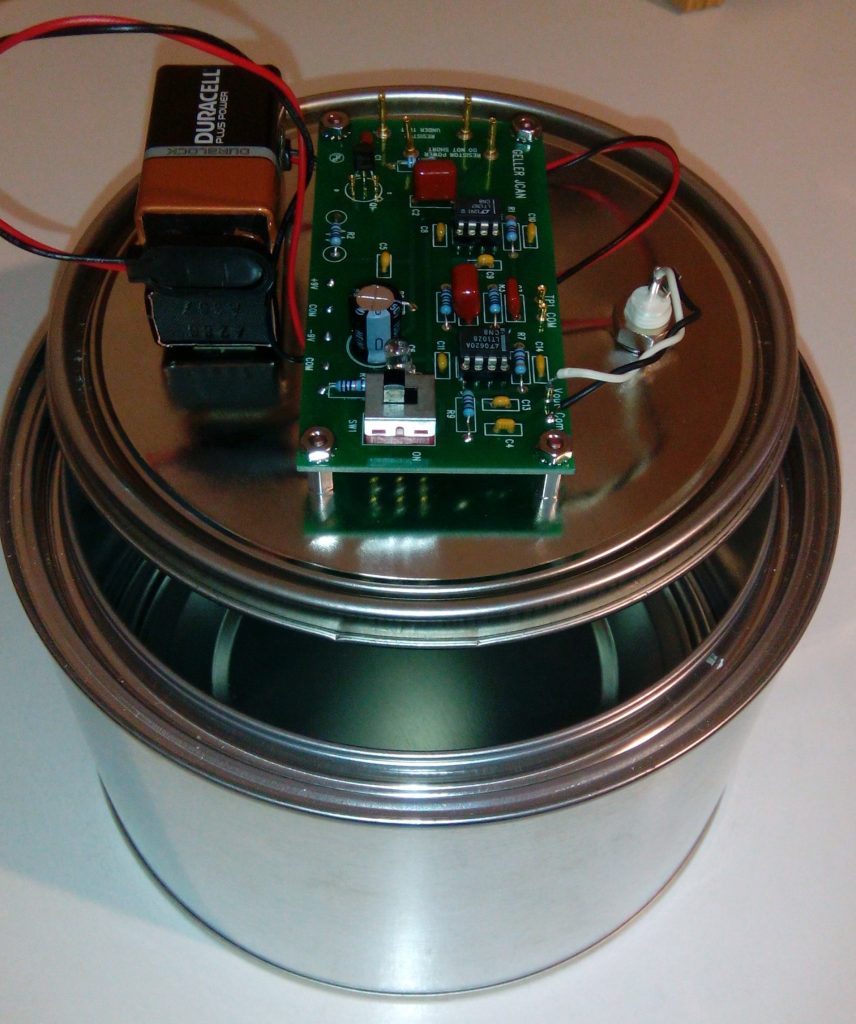 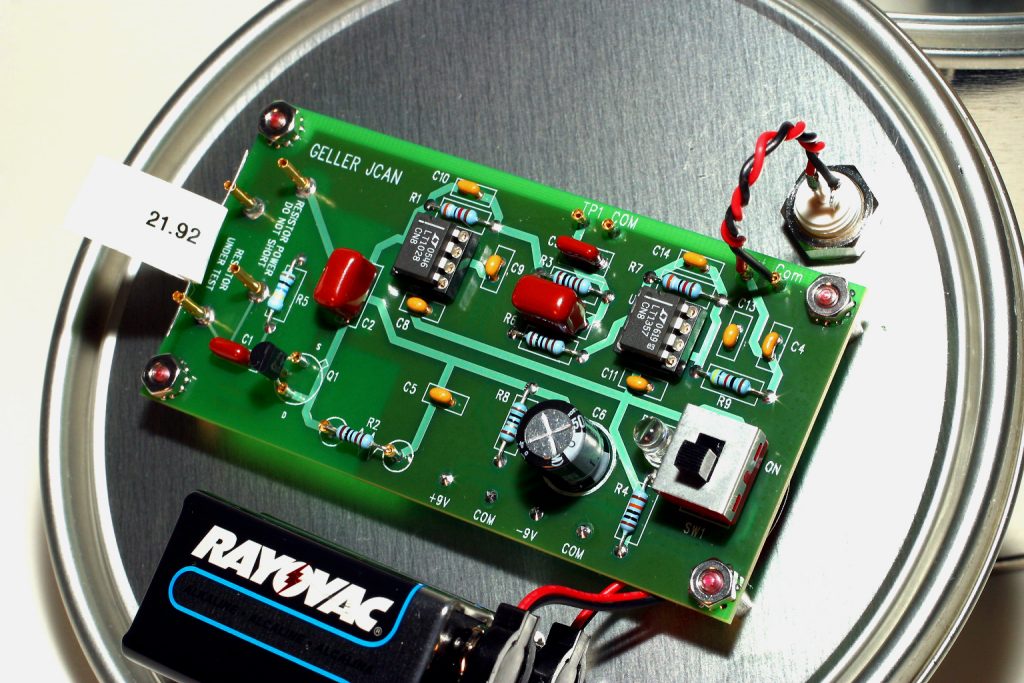 For the measurement of the output signal you can use an oscilloscope with measurement functions on AC signals, or a millivoltmeter as the one shown in the picture below: it is a precision AC millivoltmeter, model HP 400 EL, with the scale ranging from 1mV to 300V. Tools of this type, used, are found fairly easily and at a low price on eBay.
In order to obtain the actual value of Vrms the value read from this instrument has to be multiplied by a factor equal to 1.13, this is because the instrument is configured for a sinusoidal signal, while in the case of thermal noise, the signal is random. 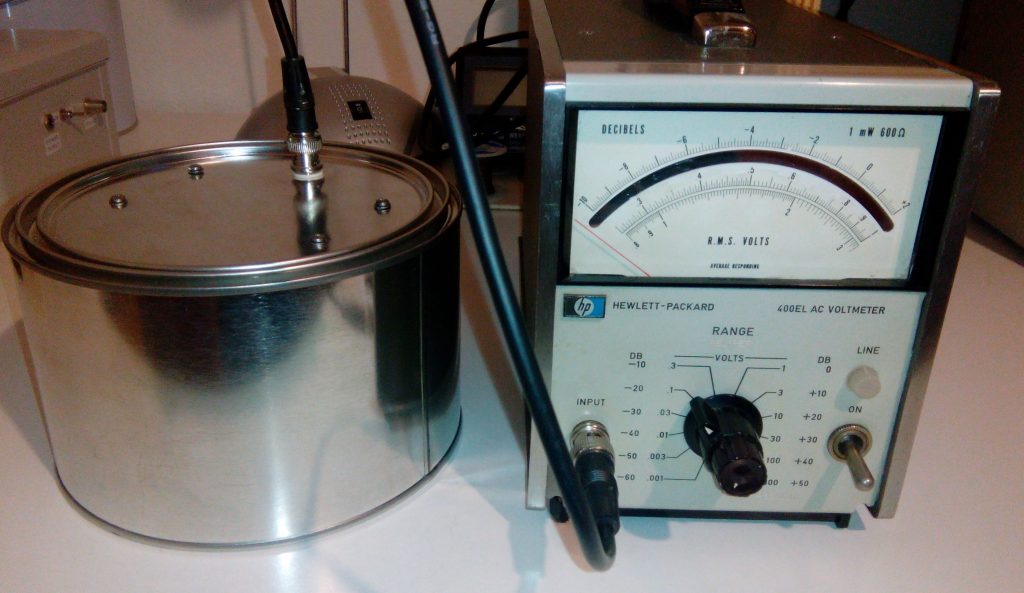 Then the circuit must be calibrated in order to determine its operational characteristics. For calibration, you can use the method described in the JCan article. This method consists in carrying out the measures of Vrms value for a series of resistors of known value, it should also be measured the noise base level by putting a short circuit in place of the resistor, it should also be taken note the environmental temperature. These data should be entered in the Excel template available on the Gellerlabs site.
Then the parameters gain and bandwidth must be tuned so that the measured values correspond to the theoretical values. The calculations take into account the noise base level, the JFET input resistance and the environmental temperature.
In the chart below you can see the result of the measurements that we performed:
T = 20°C
Rinput Jfet = 10MΩ
Noise base = 0,69mV
Gain = 2000 (estimated parameter)
BandWidth = 14000Hz (estimated parameter) 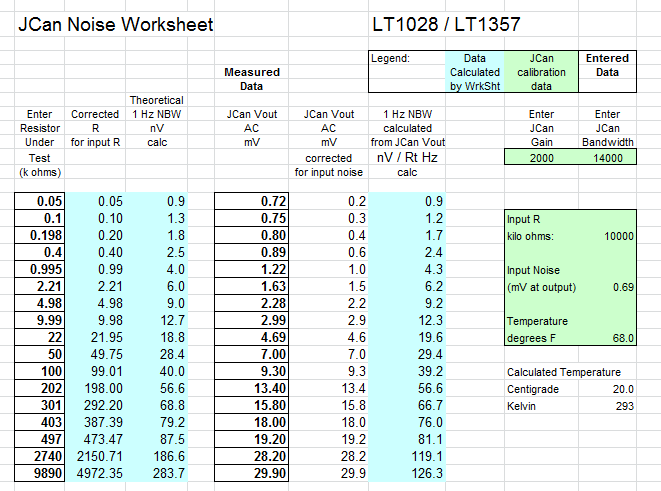 In the chart below you can see, in green, the measured noise Vrms trend for resistance values that range from 50Ω to 500kΩ. In blue it is shown the theoretical trend calculated by the formula of Johnson-Nyquist:

As you can see the correspondence is excellent. For high resistance values start to feel the effect of the input capacitance of the circuit that causes the measured value is less than the theoretical.

As explained by Johnson and Nyquist thermal noise generated by a resistor only depends on the value of the resistance and the temperature but does not depend on the type of the resistor or the type of material of which is composed of the resistor, also the power density is constant in all frequencies (up to a certain upper limit). To check this we acquired the frequency spectrum, shown in the picture shown below. From the FFT spectrum it can be seen as the power density remains almost constant up to 10-20kHz which corresponds to the bandwidth of our amplifier. The Johnson noise is therefore an example of “White Noise“.

Estimate of the Boltzmann constant

Knowing the temperature (expressed in ° K) and the resistance values, the Johnson noise measurements may be used to determine the value of the Boltzmann constant Kb.
In the chart below we present on a logarithmic scale the measured data, together with the regression line. From the slope of the line you can obtain the value of the Boltzmann constant:

But what is the nature of this constant Kb ? For example it is related to the temperature conversion in units of energy: E = KbT. We also know that this constant is the “microscopic” version of the gas constant R, as you can see writing the ideal gas law in the following two equivalent ways:

From the equations written above it is clear that R and Kb are tied together:

Where NA is the Avogadro number.

We can therefore draw a parallel between the chaotic motion of the particles of an ideal gas and the movement of electrons inside a resistor, whose statistical fluctuations give rise to a voltage at the resistor terminals as well as the movement of particles give birth to measurable macroscopic phenomena as Brownian Motion.

The thermal noise of a resistor is thus the electrical equivalent of the Brownian motion of a particle suspended in a fluid and subject to random collisions of the molecules.