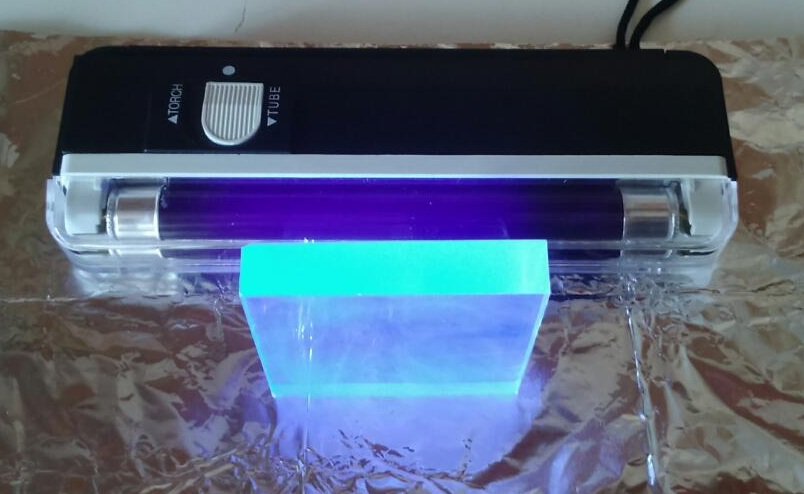 The term “plastic scintillator” typically refers to a scintillating material in which the primary fluorescent emitter, called a fluor, is suspended in the base, a solid polymer matrix. While this combination is typically accomplished through the dissolution of the fluor prior to bulk polymerization, the fluor is sometimes associated with the polymer directly, either covalently or through coordination, as is the case with many Li6 plastic scintillators. Polyethylene naphthalate has been found to exhibit scintillation by itself without any additives and is expected to replace existing plastic scintillators due to higher performance and lower price.

The detector has been assembled by coupling a SiPM sensor with a scintillator crystal. The SiPM have been described in several previous posts : Silicon photomultipliers, SiPM  Preamplifier. The sensor is a SiPM of AdvanSiD, sensitive in the near ultraviolet, with an effective area of 4x4mm, shown below :

The SiPM sensor has been placed on a side of the scintillator crystal and fixed with transparent adhesive tape, to increase the optical coupling efficiency, between the SiPMs and the crystal a layer of silicon Optical grease has been spread : 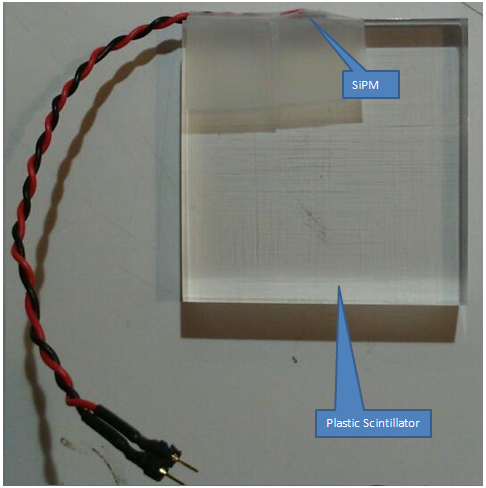 The plastic crystal with SiPM was wrapped in reflective aluminum foil in order to increase the probability that the photons produced in the scintillation are captured by the sensor SiPM : 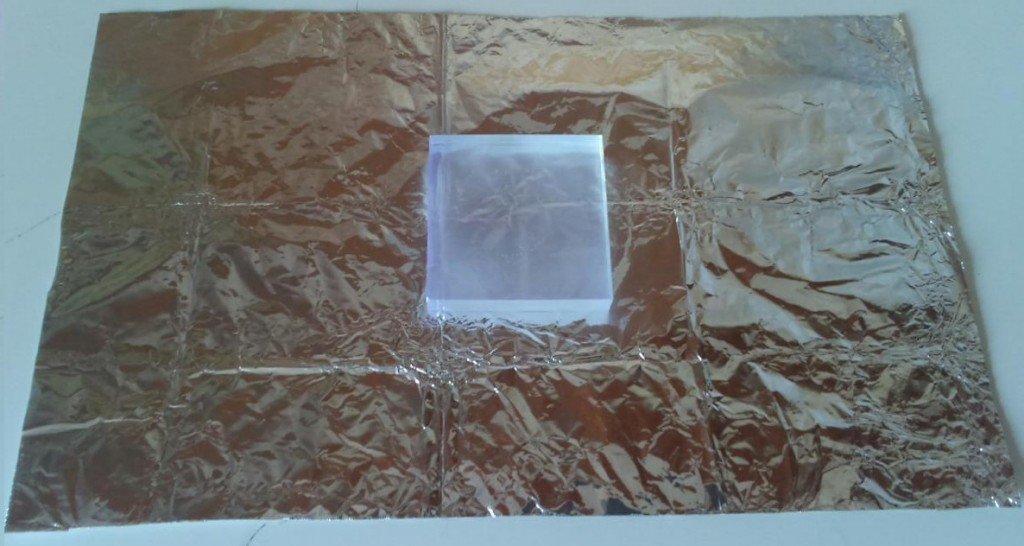 To prevent the SiPM can be reached by ambient light, the whole detector was wrapped with black opaque tape. 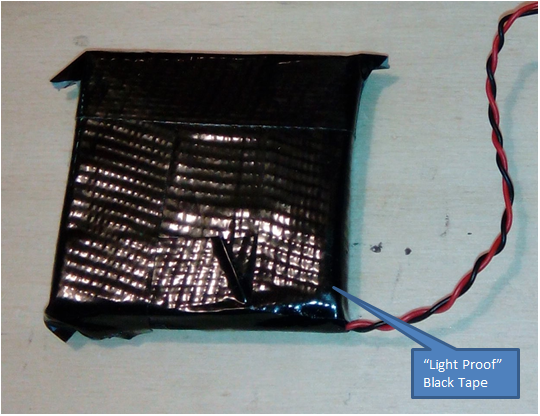 For the first tests with the plastic scintillator coupled to the SiPM the AdvanSiD preamplifier has been used. The preamplifier is described in the previous post : SiPM Preamplifier. The images below show the connection of the device : 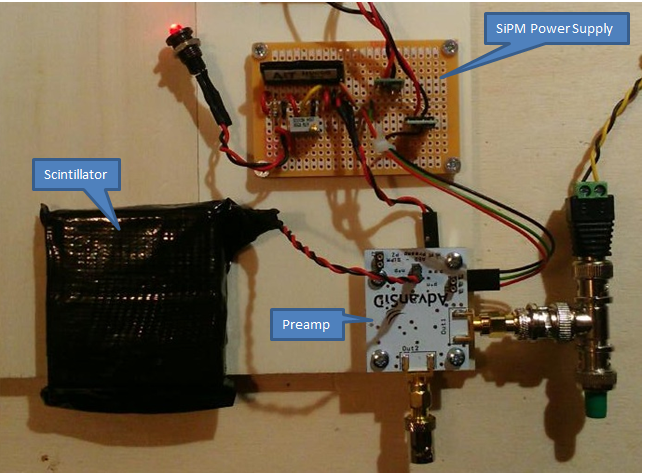 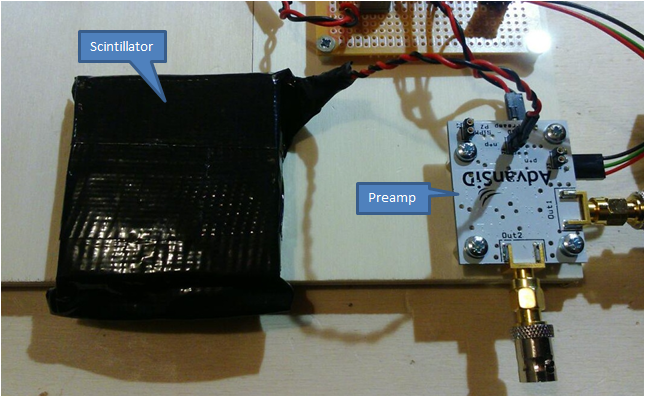 The image below shows the trace of a pulse generated by the plastic scintillator and acquired by the oscilloscope . The plastic scintillator is sensitive to charged particles then the pulses generated by this scintillator are very probably caused by cosmic muons interacting with the crystal. The low-amplitude pulses (10-20mV) on the other end are due to the noise of SiPM sensor. The pulses produced by the passage of charged particles through the crystal have amplitude of 100-200mV, so they are easily distinguishable by the pulses due to noise. In addition to the pulses generated by cosmic rays, the scintillator crystal responds also, but to a much weaker extent, to the gamma rays which are present in the background radiation.

To make counting measures a circuit has been used which makes the polarization of SiPM and the pulse extraction, the pulse is then processed by a fast comparator with a threshold of 100mV that produces at the output a pulse of about 200ns , which is further processed in order to produce in output a TTL pulse of+ 5V and 10μs duration. This pulse is sent to the “Theremino Master” which carries out the counting of the pulses, which are then displayed by the software ” Theremino Geiger “. 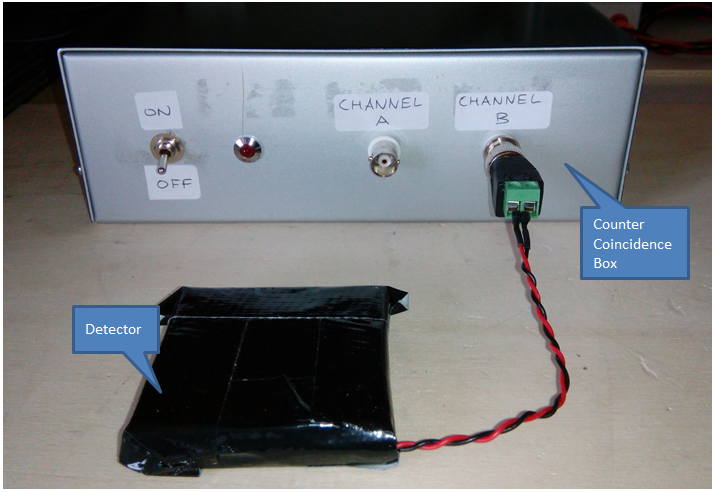 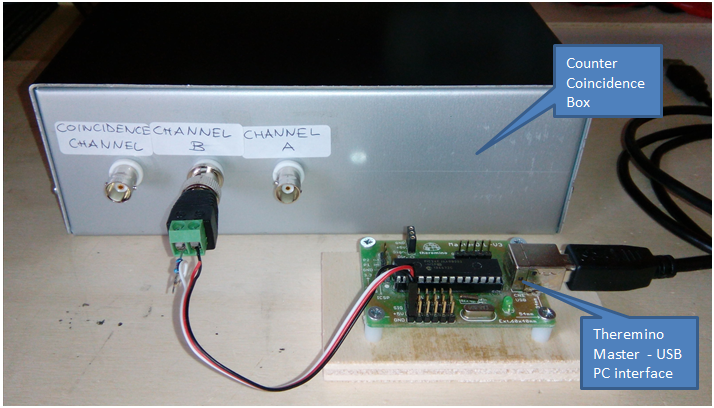 The first measurement was that of the background radiation. Knowing that the plastic crystal is mainly sensitive to charged particles we expect to obtain a direct measurement of the cosmic ray flux on the detector surface :

The result is shown below : 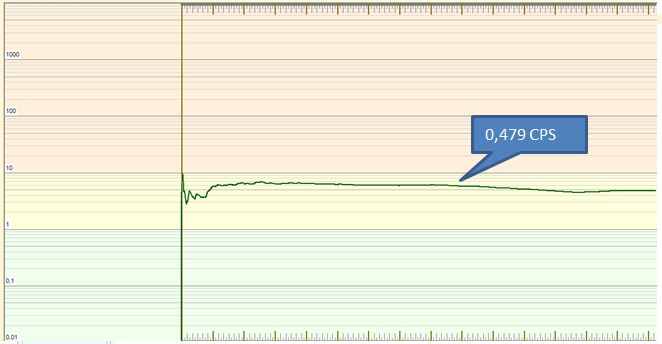 As thorium sample a thoriated gas mantle has been used. The emission of radiation comprises a not negligible quantity of β radiation (electrons), easily detected by the sensor, indeed the result of the count is significantly higher than the value of the background. 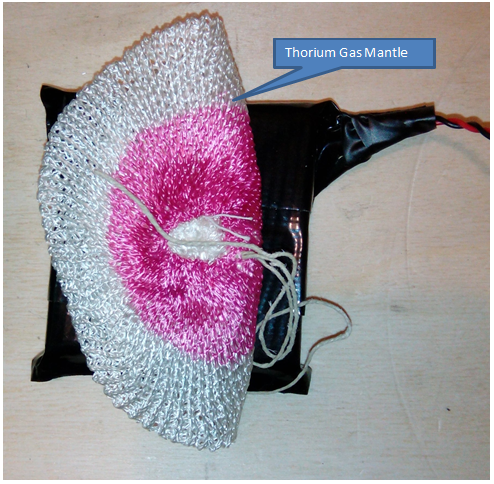 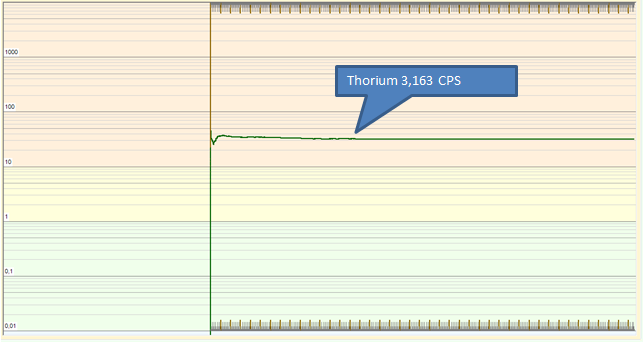 A sample of 0,25 μCi of cesium has been used. The cesium emission includes a weak  β radiation (electrons), which in any case are detected by the sensor, in fact the result of the count is slightly greater than the background value. The main gamma emission of Cesium at 662keV is hardly detected. 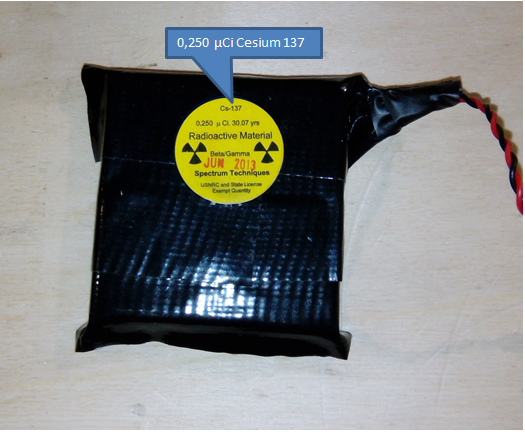 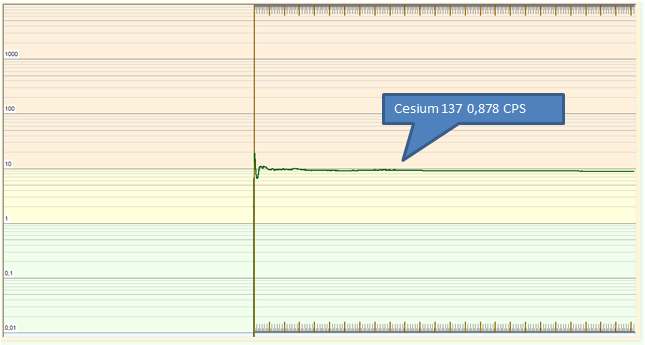 A sample of 1 μCi of sodium has been used. The emission includes a considerable quantity of gamma radiation and positrons that are detected by the sensor, indeed the result of the count is much higher than the value of the background. 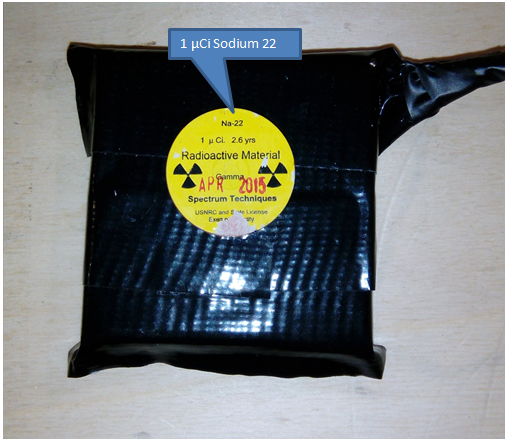 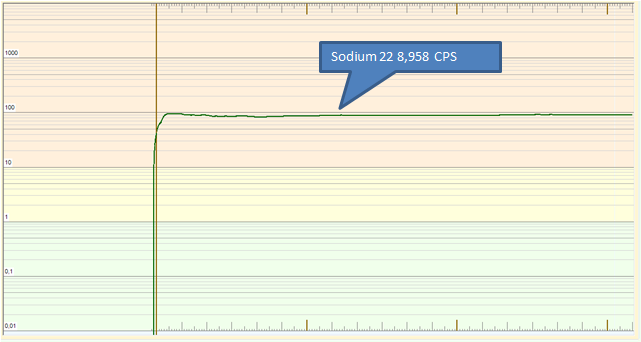 A sample of 0,9 μCi of Americium has been used. The emission includes a considerable amount of α radiation, which can not be detected by the sensor, indeed the counting result does not differ from the value of the background. The main gamma emission of americium at 60keV is hardly detected. 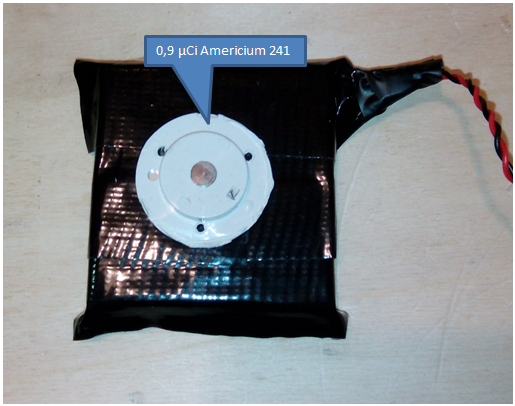 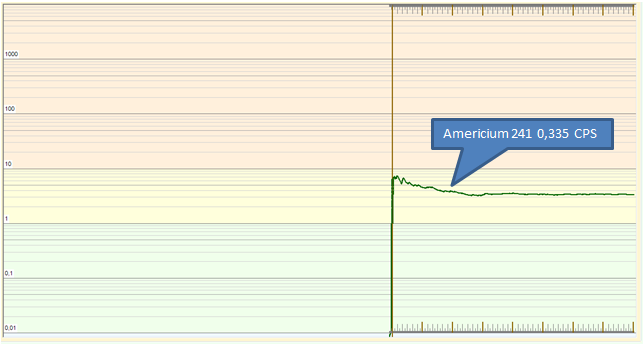 Assessment of sensitivity to Gamma Radiation

To assess the sensitivity of the detector to gamma radiation was made a measurement with the two sources of thorium and sodium 22 that emit a discrete quantity of gamma emissions, shielded by a slab of aluminum which should stop most of the beta radiation : 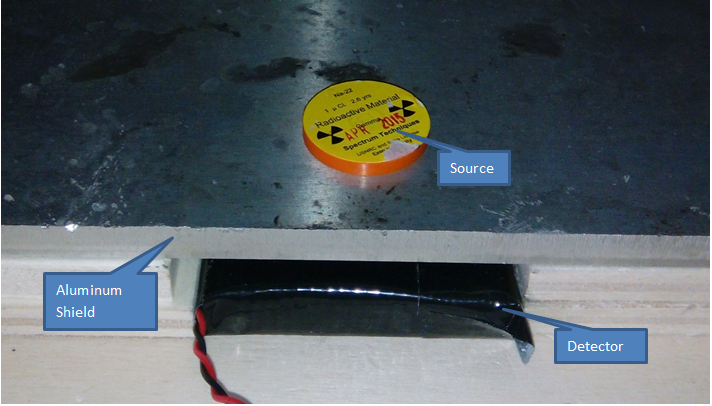 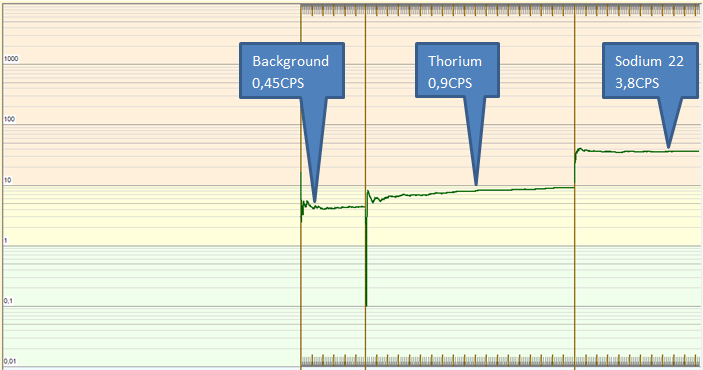 From the results of the measurements it is clear that the sensor responds to a limited extent with the aluminum shield, however, it remains also a certain sensitivity to gamma radiation, which are only weakly shielded from aluminum plate.