AdvanSiD preamplifier (ASD-EP-PZ) is an evaluation board for RGB and NUV AdvanSiD SiPMs that allows for an easy interface to acquisition systems for optical and electrical device evaluation and testing.
The board has been specifically designed to match and optimize the performances of AdvanSiD SiPMs. It represents the most suitable and reliable way to start using AdvanSiD detectors and it can be used in laboratory environments for dark/light device characterization, low-light measurements, product prototyping.
The ASD-EP-EB-PZ Evaluation Board is based on a low-gain non inverting transimpedance amplifier stage (Z=248) followed by two independent output stages (OUT 1, OUT 2). OUT 1 provides a buffered output with a total transimpedance gain G1 = 50 when terminated on a 50 load. OUT 2 implements a Pole-Zero (PZ) compensation network followed by an inverting buffer that provides the differentiated version of the SiPM signal.
OUT 2 does not preserve shape and charge of the original SiPM signal but allows an effective suppression of baseline fluctuations due to dark counts. This is particularly important for timing measurements.

For the measurements it has been used a 4x4mm SiPM NUV coupled to a scintillator crystal LYSO, as shown in the figure below : 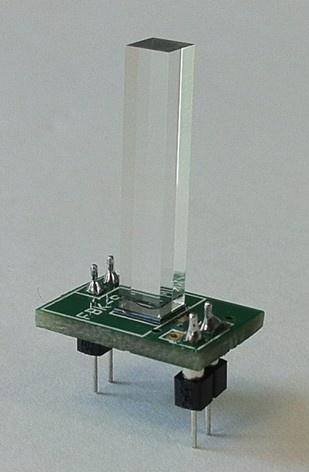 The first trace has been acquired without scintillator crystal in order to evaluate the noise due to the “dark events”. As is known in the SiPM there is a random generation of background noise due to the “dark events”, indistinguishable from the events caused by interaction with a real photon, this noise is caused by thermal agitation. Fortunately, these events correspond mainly to the trigger of a single “pixel” and therefore are easily filterable.

Using as a source of short pulses of light the scintillations on a ZnS(Ag) screen hit by alpha particles it is possible to obtain from the SiPM pulses of different amplitude. It starts from the impulse corresponding to a photon, indistinguishable from noise pulses, until arriving at the pulse amplitude about four times greater, corresponding to four photons. In practice, the pulse width is quantized and corresponds to the number of photons incident on the SiPM. 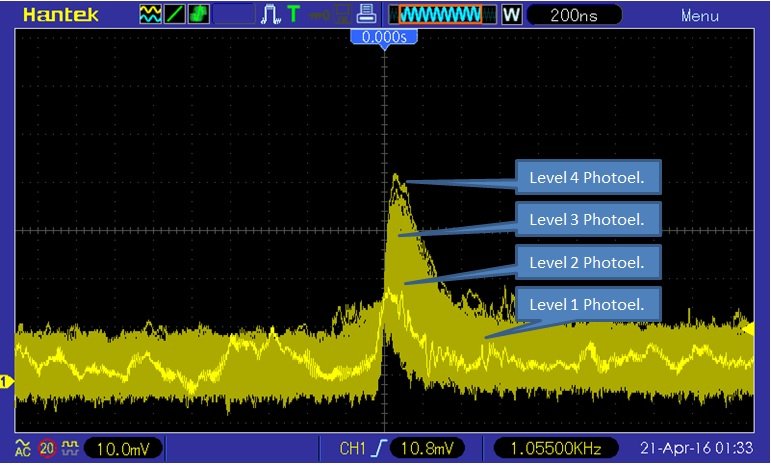 The following traces correspond instead to scintillation events caused by background radiation or to the inherent radioactivity of LYSO crystal. Both the outputs of the preamplifier have been acquired, OUT 1 for the energy of the signal and OUT 2 for the exact timing . OUT 2 is obtained by differentiating the pulse produced by SiPM .

Yellow Trace : OUT 1 – proportional to the event energy
Blue Trace : OUT 2 – event timing The output OUT 1 can be conveniently used to evaluate the gamma photon energy that produced the scintillation. The signal amplitude is about 100 – 200mV amplitude with duration of 200 – 400nsec, and then, after a second amplification, can be sent to a MCA apparatus for the spectrometry.

The output OUT 2 is much faster because it is linked only to the edge of the pulse and has a duration of only 10-20 nsec, it can then be used for the precise timing of the event, for example in all those applications, such as PET, which are based on the coincidence of the pulses.