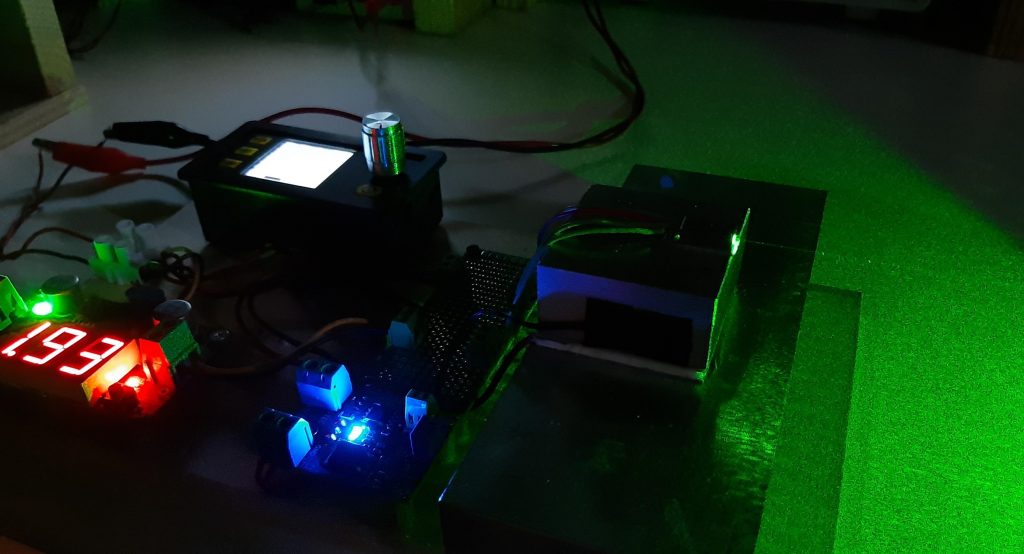 For more than a decade, solid-state lasers have replaced traditional gas lasers in many applications. However, even solid state lasers, despite their quality of reliability and performance, have limits on the wavelengths and power levels that can be obtained. In the late 1990s, Coherent identified a new technology for a semiconductor-based platform that would overcome these limitations. Coherent pioneered this concept and introduced so-called Optically Pumped Semiconductor Lasers (OPSL). In 2001, the first commercial OPSL was presented.

A key feature of the OPSL laser is the scalability of the emission wavelength. OPSLs with their high wavelength flexibility are unlike any other solid state laser. The wavelength of the fundamental emission of output in the near infrared is determined by the structure of the semiconductor gain chip InGaAs and can be set between 920 nm and 1154 nm, obtaining an output, doubled or tripled in frequency, located between 355 nm and 577 nm.

The key element of an OPSL laser is the OPS chip which acts as both a gain medium and a cavity mirror. This monolithic III-V semiconductor chip contains layers of GaAS to absorb the IR emission of a pumping diode, alternating with InGaAs quantum wells. The charge carriers generated by the optical pumping in the absorption layers feed the recombination in the quantum well layers and drive the IR emission laser process which occurs perpendicular to the layers (this is one of the reasons for the high spatial quality of the emission beam). The stoichiometry and physical dimensions of quantum wells determine the emission wavelength, just like with a conventional semiconductor laser diode. Behind these absorption/emission layers, the OPS chip also incorporates several layers with alternating high and low refractive index that act as a distributed Bragg reflector (DBR) optimized for maximum reflectivity at the specific output wavelength of the OPSL, and which therefore forms one of the mirrors of the cavity. The near infrared pumping emission, provided by a diode array or a single emitter, is focused on the front surface as shown in Figure 1. The optical cavity is completed by another mirror, the SHG/THG crystal (generation of second or third harmonic) and by the dichroic mirror that allows the exit of a part of the beam. 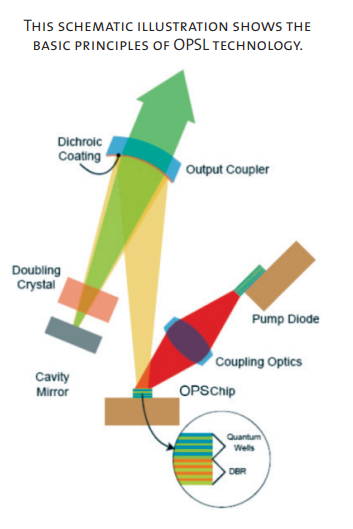 Figure 2 shows the schematic of our Osram OPSL PL530 laser. In the optical cavity there is also a birefringent filter (BRF) to select the emission wavelength with greater accuracy. The crystal for the second harmonic generation is positioned on a heating element which has the purpose of optimizing the conversion efficiency.

In the diagram shown in figure 3, taken from the laser datasheet, the pin-out of the component is shown. Pins 1 and 2 power the laser diode, while pins 3 and 4 are connected to the internal heater. Pins 3 and 4 have no polarity while the correct polarity must be respected for the laser diode power supply. The internal heater must be driven with a voltage-controlled power supply, with a voltage of about 2 ± 0.2 V. With this voltage and depending on the temperature of the module, the maximum output power is obtained. The diode, on the other hand, must be driven with a current-controlled power supply: the maximum current must be configured at the value of 450 mA, this current, again depending on the temperature of the module, is produced with a voltage of about 1.75 V. 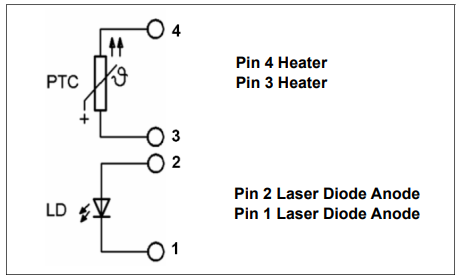 From the laser datasheet we report some characteristic curves of the operating parameters. Figure 4 shows the trend of the power of the laser beam as a function of the resistance of the heater which is modulated by its own temperature, which in turn is modulated by the electrical power introduced. You can see how the maximum power is obtained at the value of about 38 Ω, depending on the temperature of the case. In order to keep the output power constant, it is important to keep the case temperature constant – possibly within values ​​of 30 °C ∼ 40 °C – and keep the heater resistance constant. For the case temperature, the laser can be mounted on an aluminum block, which acts as a heat sink, and a Peltier cell can be used to keep the aluminum block at a constant temperature. 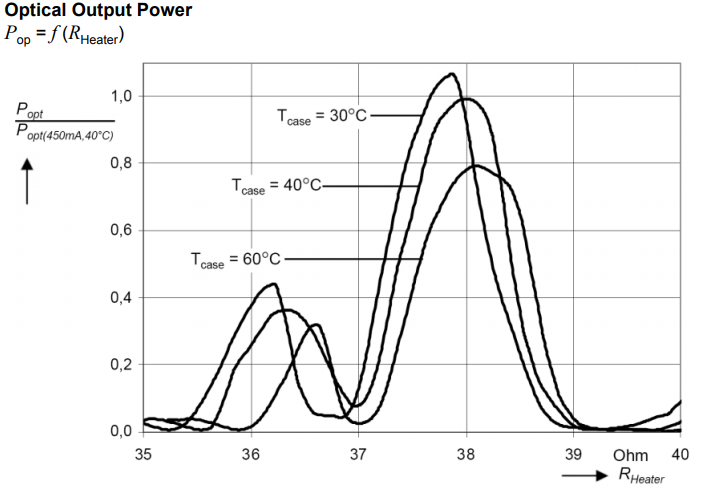 Figure 5 shows the voltage – current curve of the laser module. The emission of the laser beam begins at a voltage of about 1.55 V, with a current of 50-100 mA. The voltage can be increased to approximately 1.75 V which corresponds to a current of 450 mA. It is important to drive the laser module with a current controlled power supply in order to correctly configure the working current. The maximum operating current should not exceed the value of 450 mA: higher values ​​could quickly damage the device. 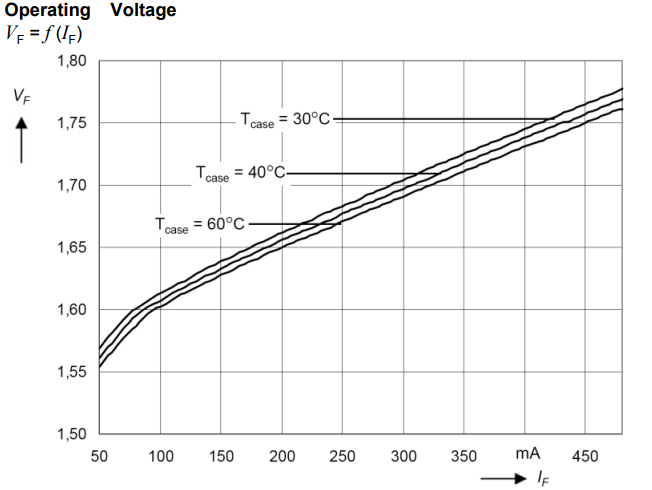 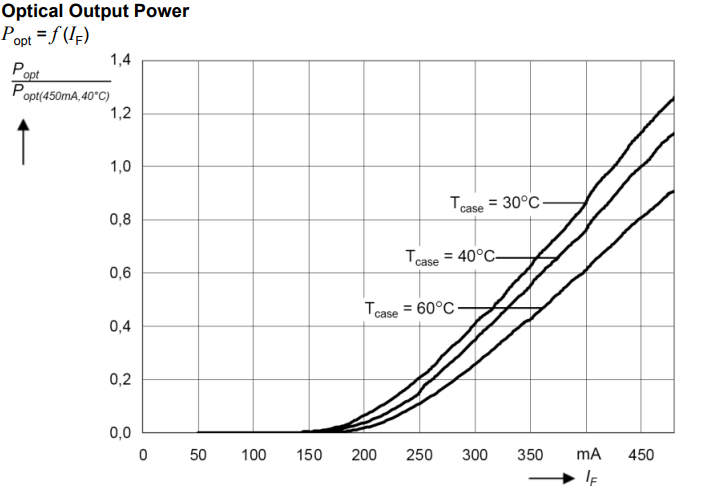 The laser module is placed in contact with an aluminum block and fixed with polyamide adhesive tape, as shown in figure 7. To improve the thermal contact, it is also possible to use thermal paste interposed between the lower surface of the laser module and the block. The aluminum block is kept at a constant temperature (ie it is cooled) thanks to the use of a Peltier cell, positioned in turn, on a heat sink. The PTC temperature sensor is fixed to the aluminum block and is used to drive the Peltier cell driver. 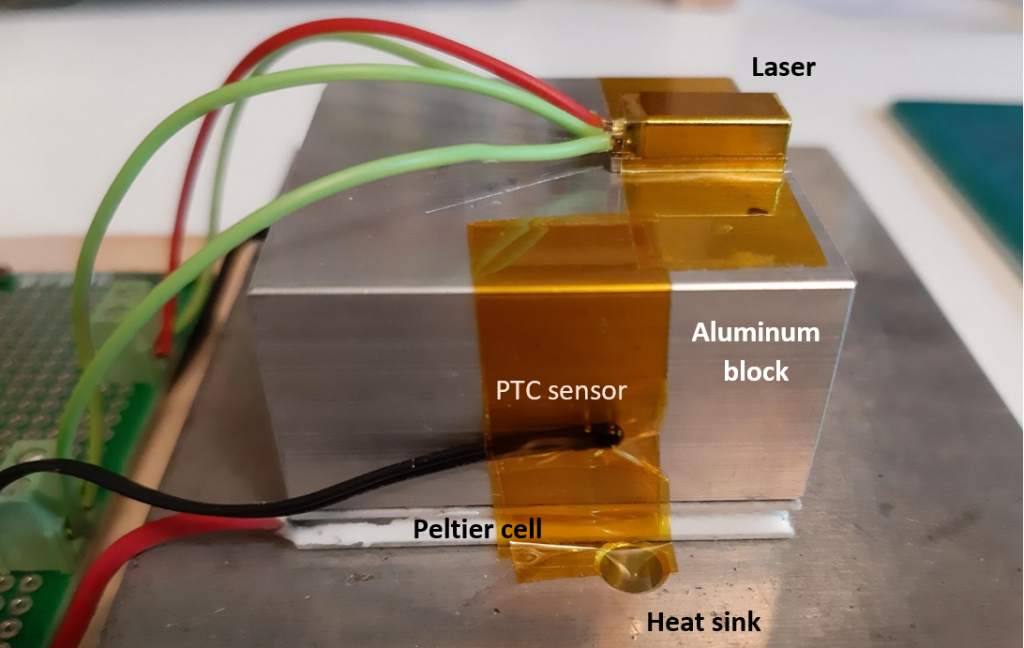 Figure 8 shows the electronics used to drive the laser module. There is the Peltier cell driver, called TEC driver, with the connections to the cell and to the PTC sensor, this circuit has a trimmer by which the desired temperature of the aluminum block is configured. There is the laser heater driver, consisting of a simple voltage controlled step-up power supply, the voltage is adjusted with a trimmer and shown on the display. Finally, there is the real laser driver consisting of a more sophisticated power supply through which it is possible to configure both the output voltage and current. 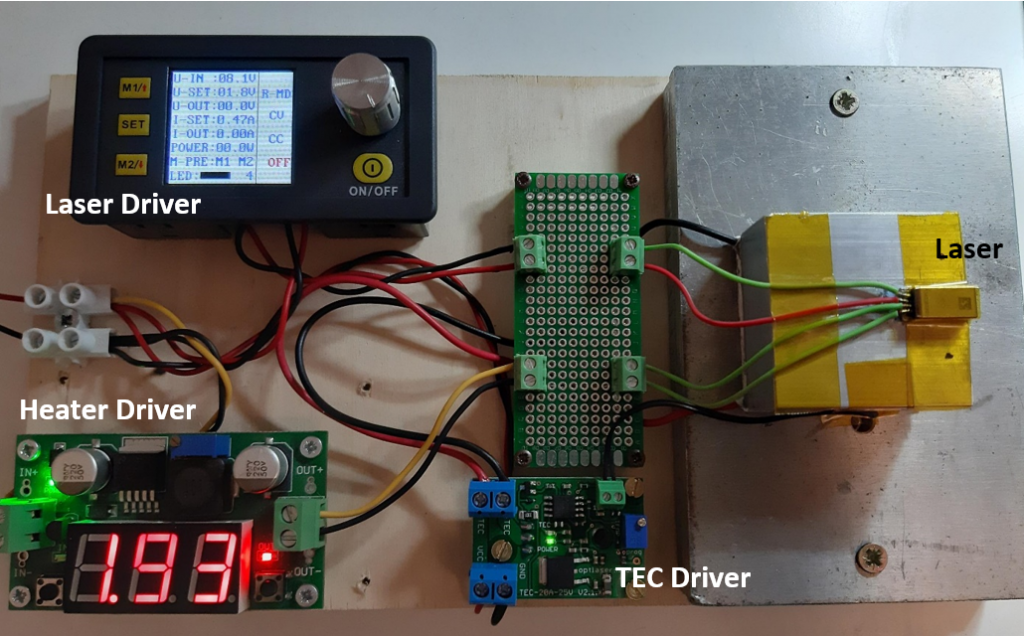 To compensate for the divergence of the laser beam, a collimating lens (for 530 nm) positioned in front of the beam exit window may be useful, as shown in figure 9. 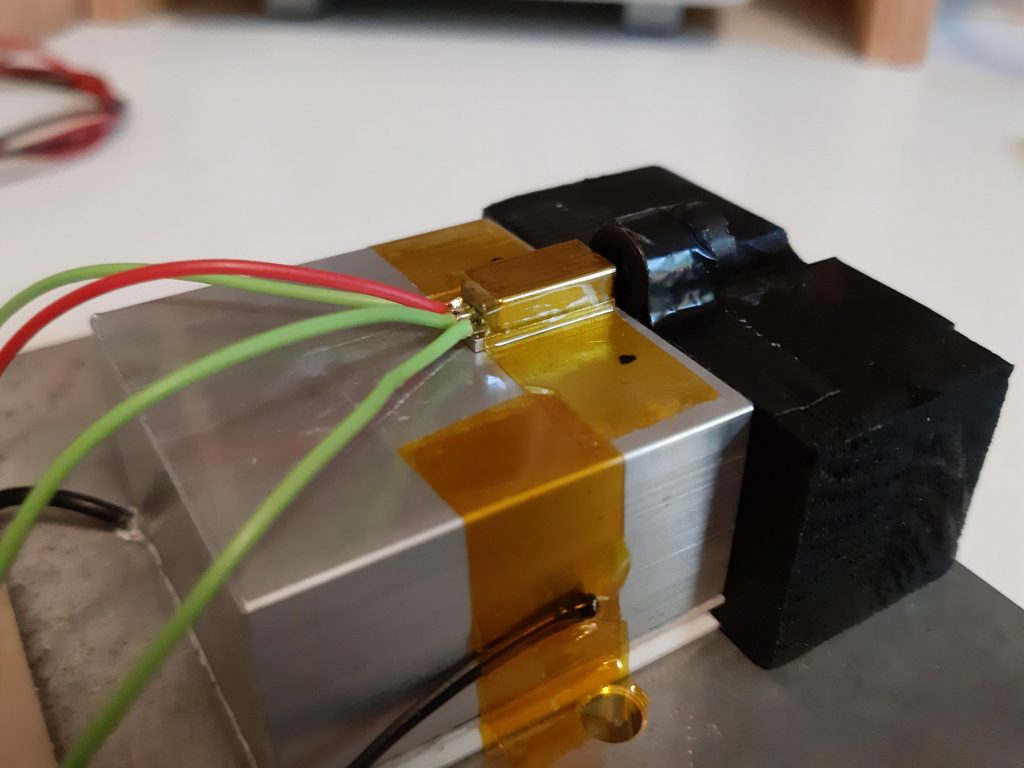 In figure 10 we show our laser in operation. With the current configured at 450 mA and the heater voltage at approximately 2 V, the beam power, measured with the DIY thermopile, is approximately 70 mW. 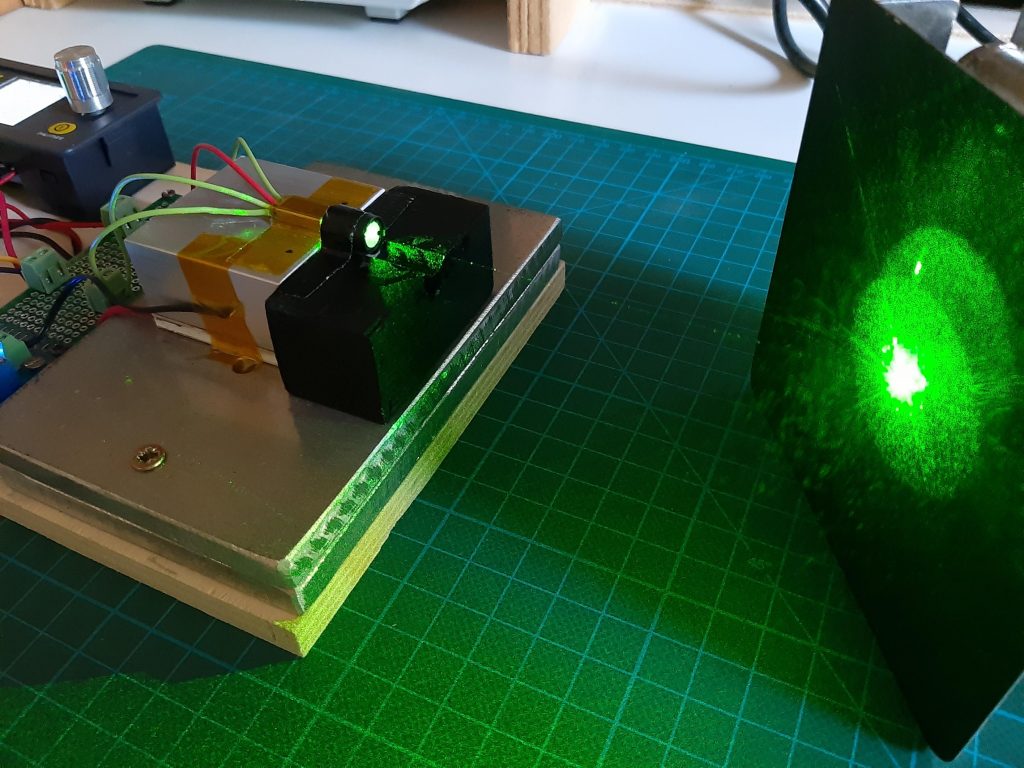 Osram’s P530 source is an example of an optically pumped solid-state laser. It is a very interesting source due to its low cost, its compactness and the high quality of the laser beam. With our setup we easily reached a power of over 70 mW. A laser of this type could be conveniently used as an excitation source for Raman spectroscopy and for fluorescence spectroscopy.