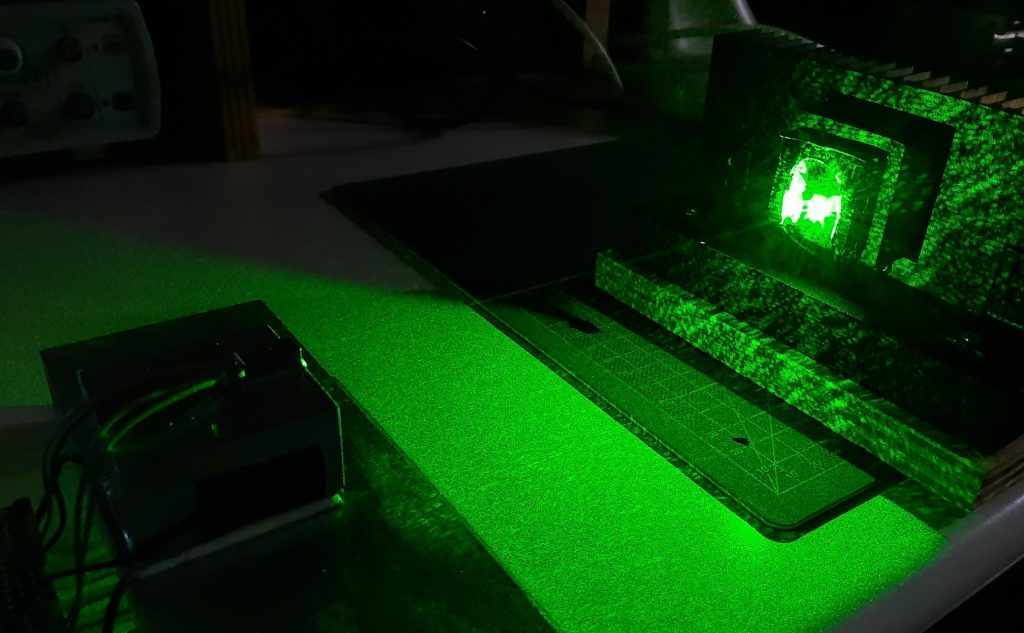 Abstract: in this post we describe the construction of a Peltier cell based thermopile for laser power measurement. 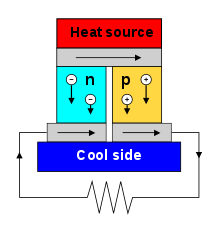 The Peltier cell is a thermoelectric device consisting of many Peltier junctions in series; together with the Seebeck effect devices it constitutes an application of the so-called “thermoelectric” systems. The Peltier cell is basically a solid state heat pump with the appearance of a thin plate; one of the two surfaces absorbs heat while the other emits it. The direction in which the heat is transferred depends on the direction of the direct current applied to the ends of the plate itself.

A common Peltier cell consists of two doped N-type and P-type semiconductor materials, linked together by a copper layer. If a positive voltage is applied to the N type and a negative voltage to the P type, the upper layer cools while the lower one heats up. By reversing the voltage the displacement of thermal energy is reversed. The scheme is shown in the image on the side.

The Peltier cells are reversible thanks to the Seebeck effect: by heating one side and cooling the other, a direct current will flow in an electrical circuit connected to the ends of the cell, proportional to the thermal difference between the two faces. The potential difference across the cell is directly proportional to the number of elements present inside the cell. The scheme of the Peltier cell is shown in figure 1. 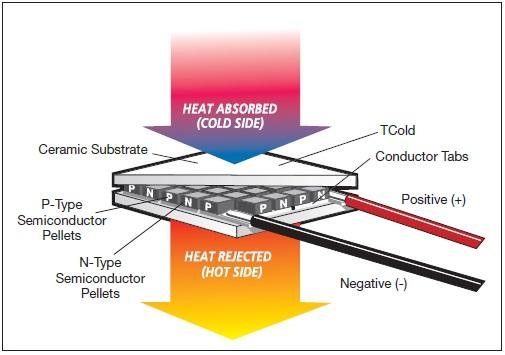 By exploiting the reversibility of the Peltier cell, we plan to use it as a sensor for measuring laser power. One of the two faces of the cell is coated with black paint to increase absorbivity. The laser beam is made to hit on the surface of the cell in order to increase the temperature of this surface, while the other surface is kept at a constant temperature. From this temperature difference, a heat flow is generated which produces a voltage across the cell. The voltage produced will be directly proportional to the power incident on the blackened surface of the cell.

One of the two surfaces of the Peltier cell must be kept at a constant temperature during the measurement process. This is achieved by fixing the Peltier cell to a material with high thermal conductivity, massive enough to also act as a material with high thermal inertia. We used a 50x50x30 mm aluminum block, while the dimensions of the cell are 30x30x3 mm. The Peltier cell is glued with cyanoacrylate in some points to the aluminum block, while a film of thermal paste is placed on the rest of the surface with the purpose of improving the thermal contact between the surface of the cell and the aluminum block. The aluminum block was in turn fixed, again with cyanoacrylate and thermal paste, to an aluminum heat sink, in order to keep the Peltier surface temperature as constant as possible and equal to the ambient temperature (Fig. 2). 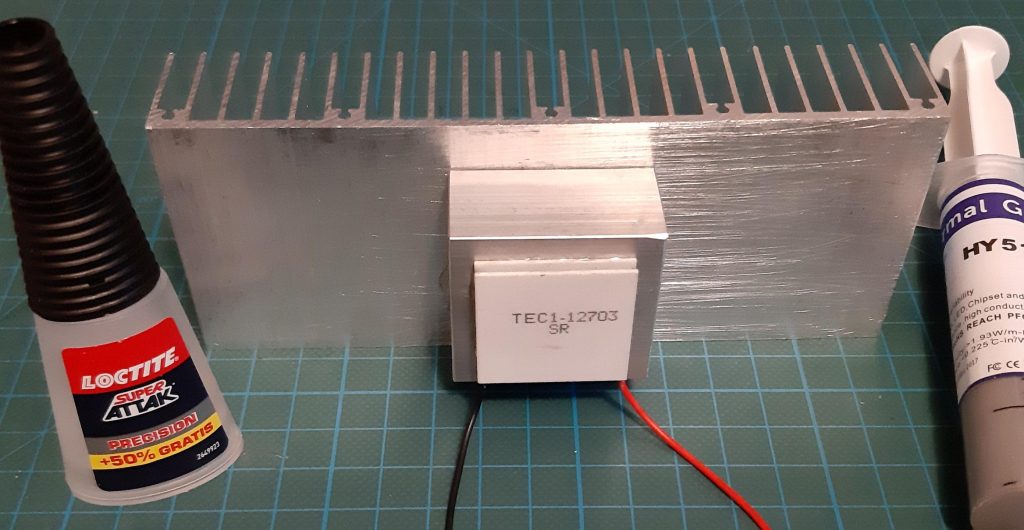 On the free surface of the cell we fixed, with cyanoacrylate, a series of 16 SMD resistors with a nominal value of 47 Ω, the total resistance measured is 720 Ω. The resistors were soldered together and on some “pads” made from adhesive copper tape. This series of resistors has the function of constituting a controlled source of heat with the aim of calibrating the Peltier cell (Fig. 3 and Fig. 4). 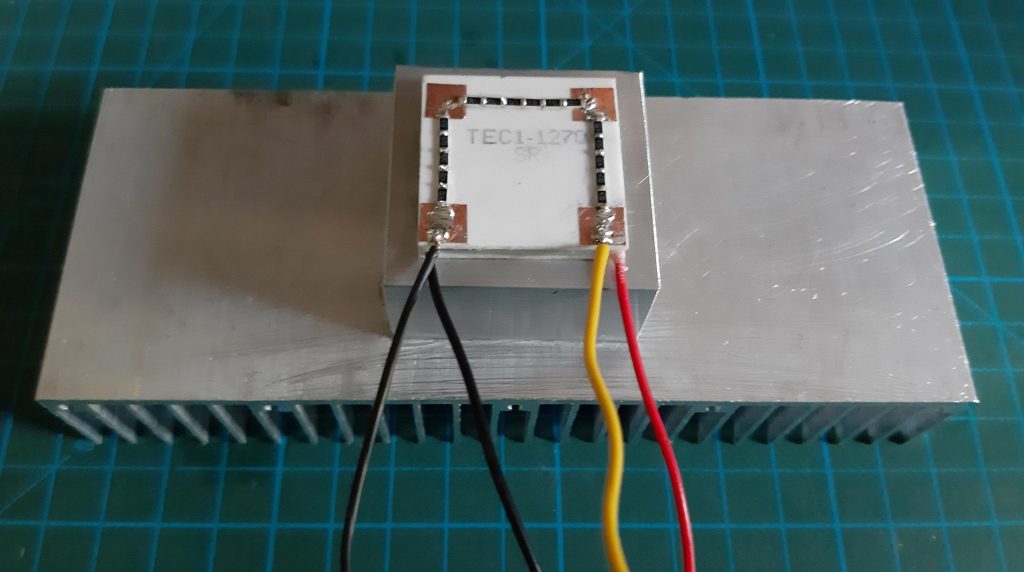 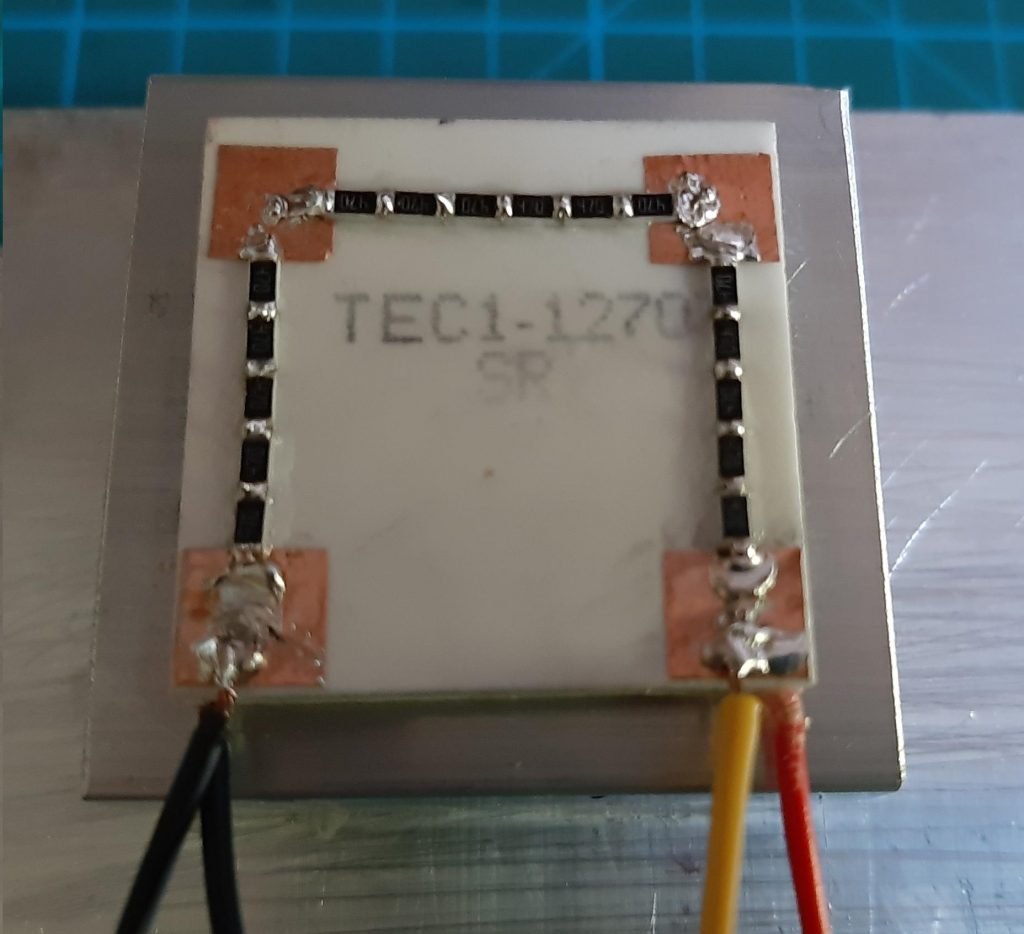 The calibration resistors are covered with a layer of thermal insulating polystyrene so that the heat produced by the resistors does not dissipate into the surrounding air but is directed towards the Peltier cell (Fig. 5). 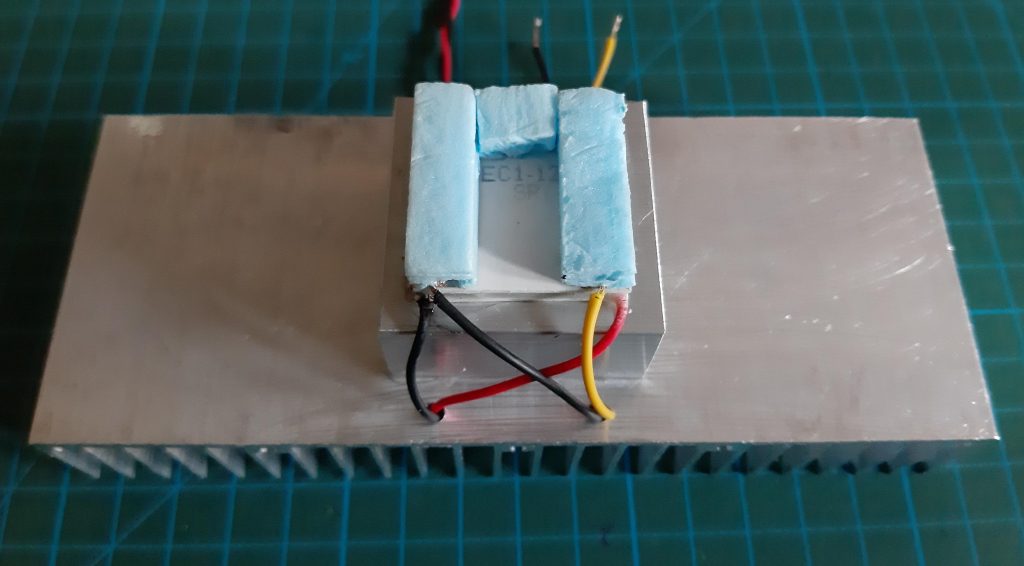 Our thermopile is completed by painting everything black and depositing a layer of carbon black on the free surface of the Peltier cell with a candle. The absorption coefficient of carbon black is about 95%, this means that the measurement of the incident light power will be less than the real value by about 5%. 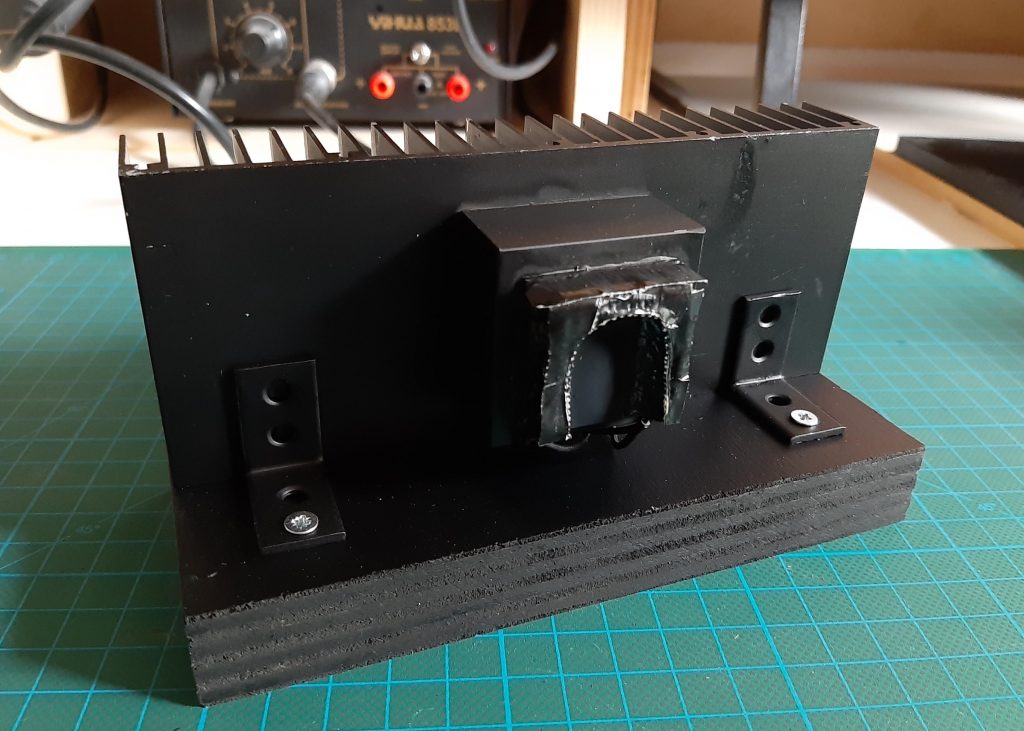 Fig 6 – The thermopile is finished

Cell calibration consists in giving the series of resistances voltage values ​​in a certain range, for example 0 – 20 V, in order to produce a thermal power dissipated by the resistors towards the Peltier surface and therefore a voltage at the terminals of the cell. The power dissipated by the resistors is calculated with the classic formula P = V2/R = V2/720. In figure 7 we show the graph that links the thermal power to the voltage at the terminals of the Peltier cell, the relationship is linear with an excellent approximation and the regression line has equation: 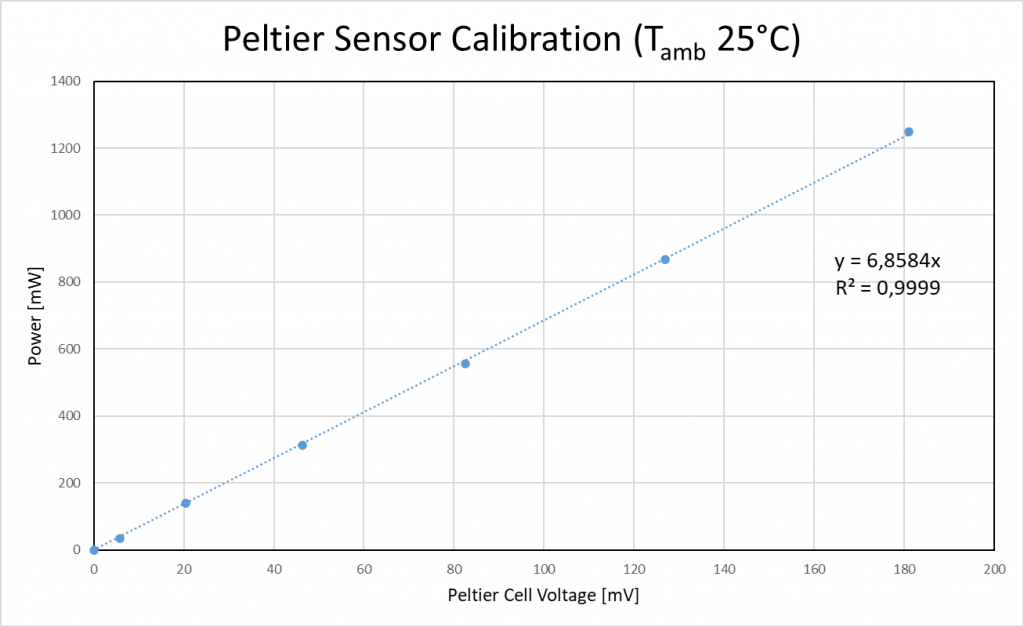 With our DIY thermopile we tried to measure the power of two lasers. The image in figure 8 shows the measurement of the laser used for Raman spectroscopy, it is a DPSS laser with a nominal power of 100 – 150 mW. For this laser we obtain from our thermopile a voltage value of 18 mV which corresponds to a power of 123.4 mW, to which we add a 5% of power lost by reflection from the Peltier surface which brings the power value to 130 mW. 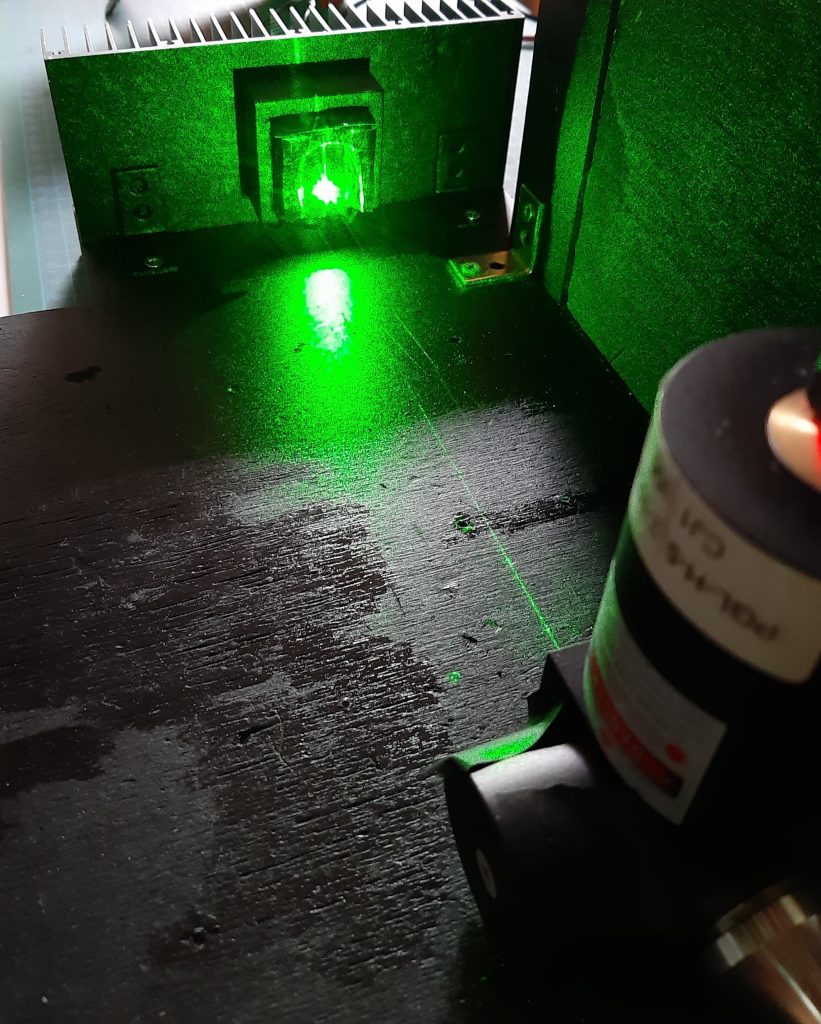 We performed the second measurement on an Osram OPSL P530 laser (we will describe it in a future article), in this case the thermopile provides the value of 10.5 mV which is equivalent to a power of 72 mW, taking into account the loss by reflection of about 5%, we get a power of 76 mW.

Our DIY thermopile has proven to be a reliable tool for laser power measurement, even in the low to medium power range.