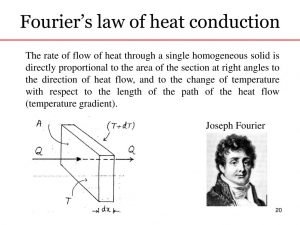 Abstract : this Post presents the construction of an apparatus for the study of heat conduction. After a theoretical premise in which the Fourier law and the heat equation are mentioned, the apparatus is described and some examples of its application are reported. In particular, the case of the transmission of a heat impulse along a bar and the case of temperature distribution along a bar whose ends are kept at constant temperature have been studied. The cooling curve in the air of a container of water heated to almost boiling has also been studied.

Heat and temperature are well-known physical concepts, for which we all have a rather precise idea, thanks above all to the continuous daily experiences we have with objects that are more or less hot or cold. Behind the apparent simplicity and immediacy of the concepts of “heat” and “cold”, however, rather complex physical processes are hidden which often require a rather sophisticated mathematical description.
Fourier’s theory of heat conduction has now almost two centuries, however it remains a fascinating topic that leads to numerous experiences in experimental physics.
In this post we will describe some experiments on heat conduction, based on the acquisition of temperature data from sensors connected to a PSoC micro-controller.

Consider a function T(x,y,z) which describes the temperature at a given point (x,y,z) of the three-dimensional space of an object. The daily experience of each of us is that the temperature is transmitted and distributed throughout the surrounding space. At this point we ask ourselves how the temperature is transmitted to the closest and most distant points and what evolution occurs over time.
The heat equation is exactly the description of these spatial and temporal variations given certain initial conditions and boundary conditions. 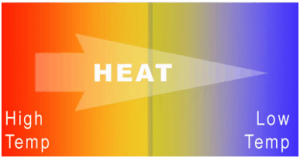 As we know, the heat diffuses from the hottest parts of the object towards the colder parts (as shown in the image on the side) and over time the temperature tends to level out. The point, however, is to know how to calculate the temperature at a specific point and at a certain point in time given the initial distribution of the temperature (initial conditions), the external conditions (boundary conditions) and the material of which the object is composed.
To do this it is necessary to know the equation that regulates the whole phenomenon.

The experimental law of heat conduction (Fourier’s law) establishes that the speed of heat transmission through a material is proportional to the temperature gradient and to the (orthogonal) surface through which the heat flows.
In a simplified situation where the heat flow is only unidirectional (for example a long bar with minimum transverse dimensions) we can write the Fourier law in the following terms :

Where A is the surface area and k is the thermal conductivity of the material .
In three dimensions the equation is expressed in vector terms :

Where q is the heat flow vector (heat that flows through a unit surface in the unit of time), while ∇T is the temperature gradient vector defined with the partial derivatives:

To determine the temperature distribution T (x,y,z) it is necessary to have a differential equation that expresses how the temperature of the medium varies as the position changes in space and time. To derive this equation we make use of the Fourier law described above and the principle of conservation of energy. We don’t repeat the physical and mathematical reasoning but we just report the final result :

The Fourier equation is a second order partial differential equation. It is one of the most studied equations because, in addition to the distribution of temperature, it represents a vast class of physical processes : for example, diffusive processes are modeled by this equation. The equation can be simplified, and solved, in some particular cases: 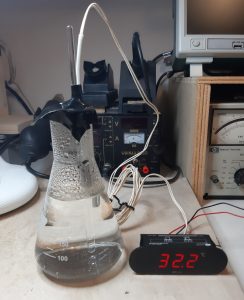 The first experimental measure consists in the detection, at regular time intervals, of the temperature of a fluid (water) during cooling. The water is heated to about 70-80 °C, and then placed in a boron-silicate glass flask and left to cool in the air. The temperature is measured with a thermistor or thermocouple probe, as shown in the image on the side.

In this particular case the Fourier equation can be applied with the following conditions :

With these premises, the equation is simplified and becomes :

where T no longer indicates the temperature but rather the difference with the ambient temperature. This equation has a simple solution in the classic exponential function:

The measurements we have made and which we report below on a semi-logarithmic scale are in excellent agreement with the forecast of a decreasing exponential trend.

Apparatus for the study of Heat Conduction

To conduct more complete measurements on heat transmission, we have built an apparatus that allows us to acquire the temperature read by eight thermometric probes. The data are acquired at time intervals by means of a PSoC microcontroller and recorded on file with a Raspberry Pi (refer to the post Raspberry Pi Logger (ENG) for the detailed description). The temperature probe is DS18B20 which is a digital probe that communicates via 1-wire protocol. The range of the probe is rather limited : from -55°C to +125°C and precision and sensitivity are not very high but are suitable for our purposes, moreover the probes are low cost and easily interface with our PSoC. 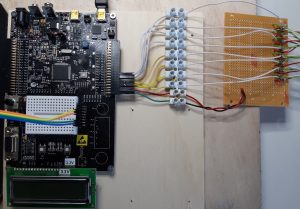 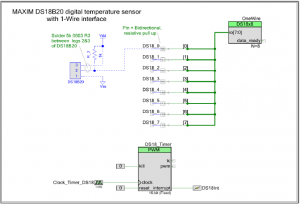 The temperature probes were inserted inside an aluminum bar with a 20x20mm square section and 40cm long. 8 holes have been drilled on this bar for the insertion of the probes. To improve the thermal contact between aluminum and probe, thermal paste was used. The images below show a detail of the perforated bar and the positioning of some probes. 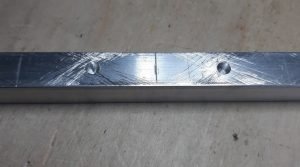 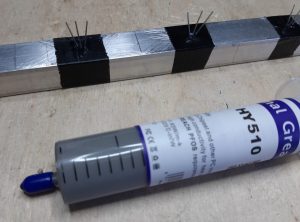 The probes were connected with a simple wire and the bar was thermally insulated with a layer of rock wool, further wrapped with aluminum foil. The images below show the realization.

The final result is the thermally insulated bar and with the eight probes positioned on the bar and spaced 5 cm apart. Two pieces of aluminum, of the same section, have been fixed to the two ends of the bar, which have the purpose of transmitting heat to the bar itself, for example by immersing them in hot or cold water, as shown in the following image. 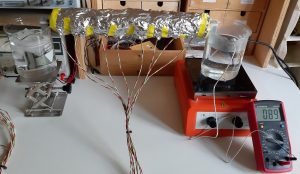 In the first experiment we heated one end of the bar for one minute, immersing it in hot water at 70 °C, and then we cooled it by immersing it in cold water at 4 °C. In practice one end of the bar undergone a impulsive heating. We expect the heat to flow along the bar giving rise to a heat wave that spreads from the heated end to the extreme kept at room temperature.
The temperature probes are indicated with the abbreviations T0, T1, …, T7, where T0 is the closest to the heated end, while T7 is the most distant.
The two graphs shown below show the trend of the temperature measured by the probes as a function of time.

From the graphs you can see how each probe registers an increase in temperature followed by a slow decrease with an exponential trend. At each point of the bar, the temperature peak is reached at different times and the absolute value of the peak decreases with increasing distance, as can be seen clearly in the following two graphs in which the moment of the peak and the value as a function of the distance from the extreme heated. 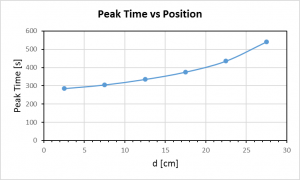 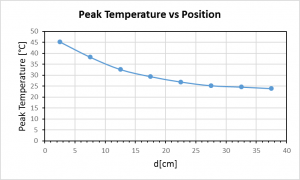 The results obtained clearly show the heat wave that propagates along the bar highlighting two aspects: the propagation time that grows in a non-linear measure with the distance and the amplitude of the wave (peak temperature) that decreases with exponential trend as the distance between the point considered and the point of application of the heat pulse increases.

In the second experiment we placed the two ends of the bar at constant temperatures : one end was immersed in water at 4 °C while the other was heated by immersing it in water at 90 °C. The temperature was checked with a thermocouple and kept constant by adding ice in one case and heating the water with an electric heating plate in the other. 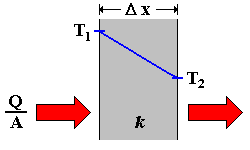 In this case the Fourier equation of temperature has an analytical solution which consists of a linear trend between the two extremes kept at a constant temperature, as shown in the image on the side.