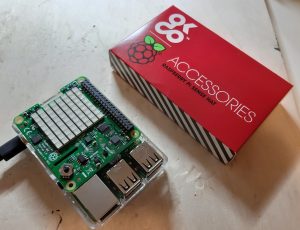 One of the most interesting features of the Raspberry – which differentiates it from a simple low-cost computer – is that it can be connected to a series of sensors and actuators via the digital ports (GPIO, General Purpose Input/Output) with which it is equipped and with which can interact with the outside world. Given the price/performance ratio and ease of use, the Sense Hat is among the best expansion cards available. The Sense Hat is equipped with a series of sensors: temperature, pressure, accelerometer/gyroscope, magnetic field and humidity, as well as a 64-channel multicolor display and a small joystick with which you can interact without a keyboard to give simple commands. This card – which plugs into the GPIO connector – was developed to carry out various practical demonstrations on board the space station on the occasion of the flight of the British astronaut Tim Peak in 2015 and subsequently by other astronauts including Paolo Nespoli and Luca Parmitano (here Astro Pi ESA challenge).

The following image shows the board mounted on a Raspberry pi unit. 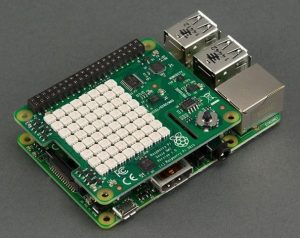 In the Sense HAT a small gyroscopic sensor is incorporated which can provide the values ​​of the rotations on the pitch, roll and yaw axes, always via Python library API. The result are values ​​that are returned as angles between 0 and 360 degrees. The figure below shows these axes. 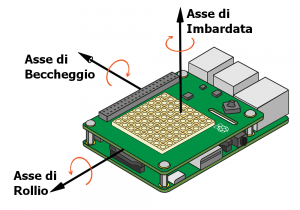 Power the Raspberry with a battery

If with the Raspberry pi – equipped with Sense Hat – you want to record data on the move, for example acceleration and orientation, or even pressure and temperature, while the card is subjected to a movement, you must provide battery power. We have used the card shown in the following image which also includes a lithium battery, the battery ensures us an autonomy of 1 – 2 hours. 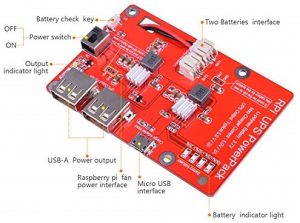 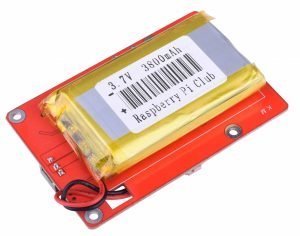 The image below shows the complete stack : battery unit, Raspberry pi and Sense Hat, positioned inside a container. 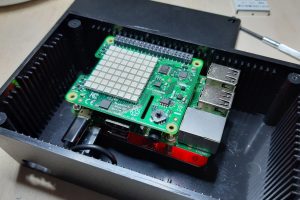 To control the RPi Sense Hat it is necessary to install python libraries, as described in the official documentation and to do this use the “apt-get” tool as described below.
The first step is, as always recommended, an update of the packages present on your distribution:

at the end you can install the specific libraries:

The one below is the Python code for acquiring data from Sense HAT and for logging on file. The acquisition is carried out at regular time intervals.

A simple experiment is to reproduce – in a small way – the microgravity condition that is created during a free fall. It is a matter of activating logging and letting the card fall from a few meters in height, obviously taking care that the fall arrest is appropriately mitigated.
The parameters that interest us are the accelerations. The graph presented below shows the acceleration values ​​measured by the Sense HAT during the fall. The parameter that interests us is the acceleration along the Z axis : before the fall, the value corresponds to g = 9.81 m/s2, during the fall it resets to zero as expected, at the moment of impact the backlashes due to the impact are noted and subsequently the value settles again on the value g. 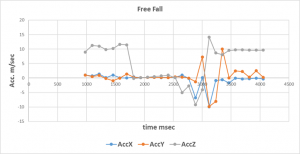 The magnetic field sensor integrated in the Sense HAT does not have very high precision, however it allows us to evaluate the direction and intensity of the geomagnetic field with a good approximation. The test consists in reading the sensor value for a few seconds, in order to collect a high number of data and then average the values.
The obtained values are the following :

Knowing the components according to the three axes, the direction and intensity of the magnetic vector can be obtained. The intensity, calculated by composing the three vectors, has a value of 30 μT, close to the expected value for the geomagnetic field at our latitude.

The Sense HAT board is equipped with an IMU (Inertial Measurement Unit). The main part of the IMU is the gyroscopic sensor. This sensor is able to give us the orientation of the board, expressed as an angle of rotation with respect to the three axes of roll, pitch and yaw. The angle can be expressed in degrees or radians. It is easy  to understand that this type of sensor is of paramount importance on aircraft and spacecraft.
To demonstrate its functioning, we recorded the data provided by the gyroscope during the movement of the board, the result is shown in the graph below. You can see how the range of values ​​goes from 0° to 360°.