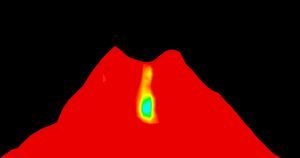 Our friend Antonio Zanardo has carried out an interesting experiment with cosmic rays : “muography”. In this post we will describe its realization.

MUOGRAPHY what is it? It is a radiographic technique used to obtain images of objects, generally of large dimensions, otherwise unattainable with other procedures (X-Rays).
The energy used in muography is provided by Cosmic Rays (RC).

It is known that a continuous flow of RC, consisting mainly of highly energetic protons, invests our planet. In the impact with the atmosphere, these particles give up their energy in collisions with the gas nuclei and generate other particles, including MUONS. The muon is a sort of “heavy” electron with mass approximately 200 times greater and having relativistic velocity, which is why it has so high energy which allows it to pass through matter. In this passage, a part of its energy is absorbed by the material : the amount of the decrease in energy depends on the thickness, type and density of the material. The differentiated absorption of this radiation allows us to form images in a very similar way to the best known radiographs.

An example of professional muography was the recent discovery inside an Egyptian pyramid of a previously unknown empty space. It has also been used to “scan” the dome of the Florence Cathedral in order to study the condition of the existing reinforcements present in the cavities. A variant of this technique is used for monitoring the state of the magmatic ducts and the volcano caldera, as shown in the cover image and in the following image.

To detect muon radiation there are professional tools, specially built in university laboratories and adapted to the planned experiment. For example, special photographic plates but also electronic instruments were mainly used in the pyramids, while in other cases only purely electronic “telescopes” were used, which use sensors of various types. There are also special optical telescopes that detect, on particularly dark nights, the soft glow of Cherenkov radiation produced by muons of very high energy that impact the atmosphere.

Referring now to our experiment, if a high density object is placed in the muon flow, e.g. an iron cube, muons are absorbed by it much more than the surrounding air. The sensors record this difference, and with the data collected, the image of the object can be formed, as if it were “projected” on a screen.

The experimental setup consists of a small portal that holds an iron cube of about 25 cm each side and which leaves the space for the passage of the detectors at the bottom. The test is aimed at verifying if and how each instrument detects differences in muon flux when it is outside the tunnel compared to when it is partially or totally covered by the iron cube.
In detail, the test consists in making a scan with the three detectors, aligned with a special support.
At the end of the test, you have three sets of data. By associating the numeric values ​​collected by the three sensors with different shades of gray and representing the results of each sensor on a table consisting of three parallel columns, an image of the examined object is obtained.

The image below shows the cube formed by the iron plates, resting on a sliding surface, while below are the three muon detectors placed side by side. 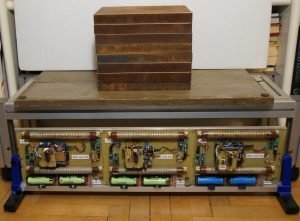 In the image you can see the object to be “muographed” consisting of eight iron plates superimposed to form a cube, and the portal that supports them, made of commercial aluminum profiles and equipped with wheels to be able to slide it along the established path.
The scan is performed by manually moving the portal in 12 successive steps, 50 mm apart, above the sensor group which remains stationary. In each step the stationing lasts 2 days to collect the incident radiation, so the overall duration of the test lasted 24 days.

Each “muometer”, is made up of two Geiger-Muller SBM19 tubes of Russian production. The tubes lie on a vertical plane, parallel and at a distance of 100 mm.

To discriminate muons coming from outer space, from other particles of terrestrial origin (background radiation) a “coincidence” electronic circuit is used. This circuit checks whether a particle crosses the two tubes simultaneously, thus providing a signal of its passage. In this case it is a muon, while natural particles, a thousand times less energetic, simply ionize the two tubes separately (the classic Geiger ticking), but they are unable to pass through the two tubes simultaneously, therefore no signal.

In addition to the fundamental coincidence circuit, there is an HV generator to drive the geiger, a “splitter” circuit that divides the voltage on the two tubes and produces signals when the tubes are hit by radiation, and finally a squaring circuit of the signal. The energy for the operation of the equipment is supplied by the power supply, but each muometer has lithium batteries as a backup.
The image below shows details of a counter similar to ones used in the muography instrument. 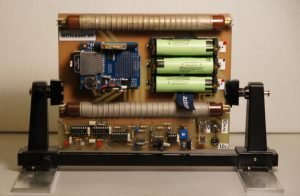 The data obtained from the measurement, with their representation in gray tones of the different count values, ​​are shown in the following image.

The image obtained is rather “rough” and contains little information. The inaccuracy is due to the amatorial level of instrumentation and to the fact that at the end of the scan, few useful data were collected. All things considered, it would be like photographing the object with a camera having a sensor of only 39 pixels ! Furthermore, due to their shape, Geiger sensors have significant dimensions. We did not use more numerous but smaller tubes in order to have a better resolution, as the sensitivity of each small tube would be too modest and consequently the integration times would increase to unacceptable levels.
Given these premises, the result is still appreciable.

The image has a dark shadow in the center. It is produced from the iron cube, and was formed because the muon flux is absorbed by the iron block, while the surrounding air lets the radiation pass being practically transparent. The data that appear are, on the left, the sum of those actually detected by the three sensors A02, F01, A00 during the twelve steps provided. In the center and on the right are the same data, reworked to obtain the image in shades of gray.