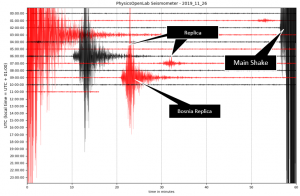 A strong earthquake struck, in the night of November 26th, the area of ​​northern Albania. Our seismological instrumentation (seismometer and geophones) recorded the main event and the subsequent seismic swarm with numerous replicas (some of them of high intensity). On the same day there was also a violent shock in the nearby territory of Bosnia and, the next day, near the island of Crete. The combination of these events leads us to think of their correlation. 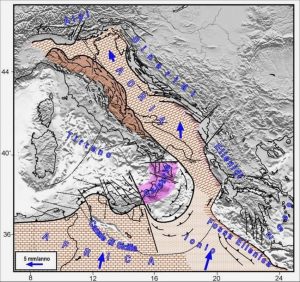 The Adriatic plate is the northern offshoot of the much larger African plate, between the Eurasian plate and the African plate there is also the Anatolian plate, which corresponds to the territory of Turkey, the dividing line between the two plates corresponds to the so-called Aegean arch which includes Crete, Cyprus and many Greek islands. The map below shows the geotectonic situation of the Mediterranean Sea. 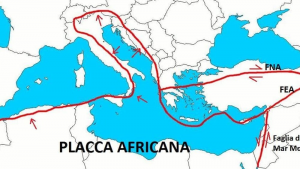 The main shock of the Albanian earthquake was very strong, estimated at magnitude 6.5. The image below shows the data presented by INGV.

The main shock was followed by numerous replicas, some of which were quite intense. The following seismograms show the traces obtained on November 26th and 27th where we can see the main shock, the replicas and the two shocks that occurred in Bosnia and Crete.

The following traces show the seismograms, recorded in mseed format and displayed with the SeisGram2K program. In the first trace we see the main sequence of the seismic swarm with low and high intensity replicas. In the second track the main shock is shown. As you can see the major oscillations are cut up and down because the signal has saturated the reading electronics, in practice the instrument has gone to “full scale”.

In the following layout is shown the time T0 of the earthquake and the arrival instants of the P waves and the S waves, calculated on the basis of the distance between the earthquake hypocenter and our seismic station.

The following image shows the layout of the geophonic sensors in response to the main shock. Compared to the seismometric trace, a greater response to the high frequencies of the P waves is noted, but a reduced sensitivity to the surface waves of greater period. The seismometer has in fact recorded the oscillations produced by the “long” surface waves for at least 20 minutes after the main shock.

Among the replicas of the Albanian earthquake there was also a rather strong quake of magnitude 5.3, which occurred in the Balkan area, specifically in Bosnia. Below is the INGV information sheet.

The following day there was also a strong quake of magnitude 6.0 near to the island of Crete, distant from Albania and therefore not linked to the same geophysical mechanisms, the temporal coincidence of the events appears, however, “suspect” and suggests that there is some connection.

The seismometric trace is shown below, you can see the remarkable intensity of the P waves with respect to other earthquakes of lesser magnitude.