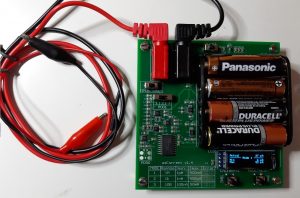 To measure the intensity of an electric current it is necessary to insert an ammeter in series with the circuit, so that the current measured on the ammeter is identical to the current that originally flows in the circuit under examination.
Ideally, the ammeter has no influence on the circuit. In actual measurements, on the other hand, there may be many sources of error that could cause great uncertainties in the measurement, especially in the case of very small currents.
A traditional digital multimeter (DMM) guarantees a level of accuracy sufficient for many measurement applications. In the case of low and very low level direct current (DC) measurements, a higher sensitivity is required: in this case, a picoammeter must be used. These are instruments characterized by very high sensitivity and can measure currents in the  range of nA (10-9) and pA (10-12).

As an example we report the following relationship between current intensity and number of flowing electrons :

Building a picoammeter is not an easy task because, as well as an accurate design, it is necessary to pay close attention to the real implementation of the circuit. Some details such as the choice of components and materials and the positioning on the PCB, which in many cases are not so critical, are rather basic in the case of the picoammeter.
In fact, the presence of leakage currents between the PCB tracks or offset currents of operational amplifiers can make the measurement of a low intensity current (pA range) completely incorrect.

For this reason we have opted for a professional product produced by KAFTS Technologies (which we thank) with which we have carried out a series of measurement tests on very low currents.
The picoammeter, shown in the cover image, features a display which shows the measured value along with other information, including the operating mode (measurement range) and the minimum and maximum values ​​recorded.
The instrument, to increase the precision of the measurements, provides a low noise power supply consisting of 4 1.5V batteries.
The tool has three operating modes :

The feedback resistor (sensing resistor) was chosen to minimize the induced load on the circuit being measured and maximize the signal-to-noise ratio (S / N).

As you known, biasing inversely a semiconductor diode the current that circulates has a very low value, very difficult to measure with a normal multimeter (DMM) : we have therefore tried to make this measurement with our picoammeter.
For greater accuracy the saturation current or, more properly, reverse saturation current, is the current that circulates when the diode is inversely biased. This current is very small (in the order of nano-amperes) until a negative voltage called “Breakdown” voltage is reached, where the current suddenly rises causing the device to break.
The reverse saturation current in a diode is due to the diffusion of minority carriers in the junction, this current is almost completely independent of the applied reverse voltage.
The image below shows the setup for the measurement. 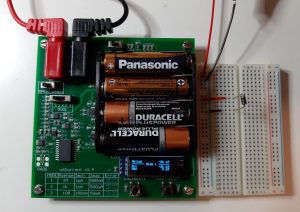 Two diodes have been tested, one Silicon diode and one Germanium diode. Given that the inverse current is linked to the density of minority carriers we expect it to be higher, for the same temperature, in the case of Germanium. In fact, for the latter semiconductor the band gap is significantly less than in Silicon and this leads to a greater production of charge carriers.
The graphs below show the data obtained in the measurements. For the Silicon diode we have a current of about 1 nA while with the Germanium diode we measured a reverse current of about 2 μA.

Electric Conduction in a Flame

An easy test to do is the measurement of electrical conduction through a flame. As we know, dry air is an excellent insulator, but gases in the plasma state become conductors due to the ionization of the molecules. An immediate way to produce a state of ionization in the air is to use a flame : the high temperature of the combustion reaction is able to produce a certain quantity of ions which can then give rise to an electric current. 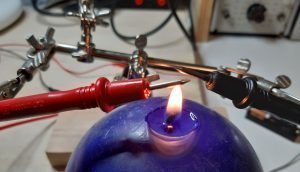 For this measure we used a simple 1.5 V battery. The results can be seen in the images above : without flame the current is practically zero. By placing the flame between the two electrodes the current rises to the value of some nA, thus demonstrating the presence of ions (and therefore plasma) inside the flame.

Current in a Photodiode

As we know, a photodiode is basically a semiconductor diode characterized by an asymmetrically doped p-n junction. The zone p, located very close to the external structure of the photodiode, is covered by a transparent anti-reflective layer.
When a photon hits the active area of the photodiode, the energy, given by the equation

if greater than the bandgap between the valence band and the conduction band of the device, it will cause the creation of a free electron-hole pair. A free pair consists of an excited electron in a conduction band and a hole in a valence band. These pairs of electron-holes constitute an inverse photocurrent that represents the electrical signal produced by the incidence of the photon.
The intensity of the photocurrent depend on the light intensity and it generally has a rather low value. The picoammeter is therefore the instrument indicated to make these measurements.
The images below show the connection scheme and the setup used to make the measurement. 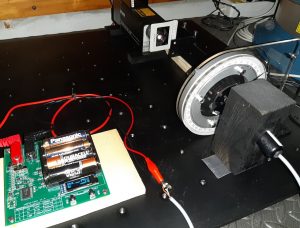 The purpose of the measurement was to evaluate the transmission of a polarizing filter as a function of the angle of rotation (details are described in the Post Polarization of Light). The results are shown in the graph below, in which the measured data are compared with the calculated values ​​predicted by the theory. As you can see the agreement between the data is rather good. 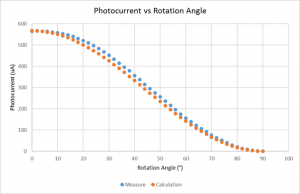 In the last measure we used a silicon photomultiplier (SiPM). This is a relatively new component which consists of a matrix of avalanche diodes (APDs) operating in “geiger mode”. When the bias exceeds a threshold value, the arrival of one or more photons triggers a series of discharges that are added together and produce an easily measurable output signal. For details, see the post : Silicon Photomultiplier (SiPM). Of course, like all semiconductor components, SiPM also has a dark current which is present even in the absence of light. This is due to the spontaneous generation of carriers.

With the picoammeter we made two measurements. In the first we measured the dark current as a function of the bias voltage. In the second we measured the SiPM current by exposing it to a phosphorescent substance (strontium aluminate doped with europium), so we could evaluate the decrease in brightness over time.

The connection scheme is as follows : 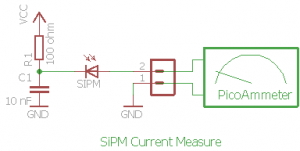 Using the scheme described above we performed the measurement of the dark current of a SiPM device with a surface of 4×4 mm. The device was inserted in a light-tight box and the bias voltage was changed progressively. The current was found to be practically zero up to a value of about 26 V, after which it began to increase with an exponential trend. The value of 26 V corresponds to the threshold voltage of the SiPM necessary to enable the avalanche discharge. The normal operating voltage of the SiPM is above the threshold value. For our component the working voltage range is 28 – 30 V.

SiPM is used to detect low and very low intensity light. Like photomultiplier tubes, it has the ability to work both in pulse counting and in continuous mode. In the pulse counting regime, SiPM records the pulses that are generated when the individual photons hit the sensitive area, in this case the intensity of the radiation is given both by the number of recorded pulses and by the amplitude of the pulse. In this regime the current produced by the SiPM has an impulsive trend and therefore it is not suitable to be measured with a picoammeter.
When the luminous intensity instead is not so infinitesimal as to require the pulse counting method, it is possible to use the SiPM in continuous mode. In this case the current pulses are continuous and are added together giving rise to a microcurrent measurable with the pico-ammeter.

In our test we used a phosphorescent substance as a light source. The images below show the setup, with the SiPM and the sample placed inside the light-tight container.

During the measurement time we read the current value every 30 seconds. The result is shown in the graph below, in which we see how the current slowly decreases from an initial value of over 400 μA to reduce after 10 minutes to a value lower than 100 μA. The trend of the current obviously reflects the luminous intensity emitted by the phosphorescence and received by the SiPM. 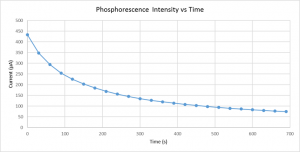 The picoammeter of KAFTS Technologies has proved to be an interesting tool. It has the ability to make precise measurements over a wide range of current values: from pA up to mA. We have tested it both with very small currents and with higher currents and has always provided precise and repeatable measurements. The equipment is certainly a good value for money.