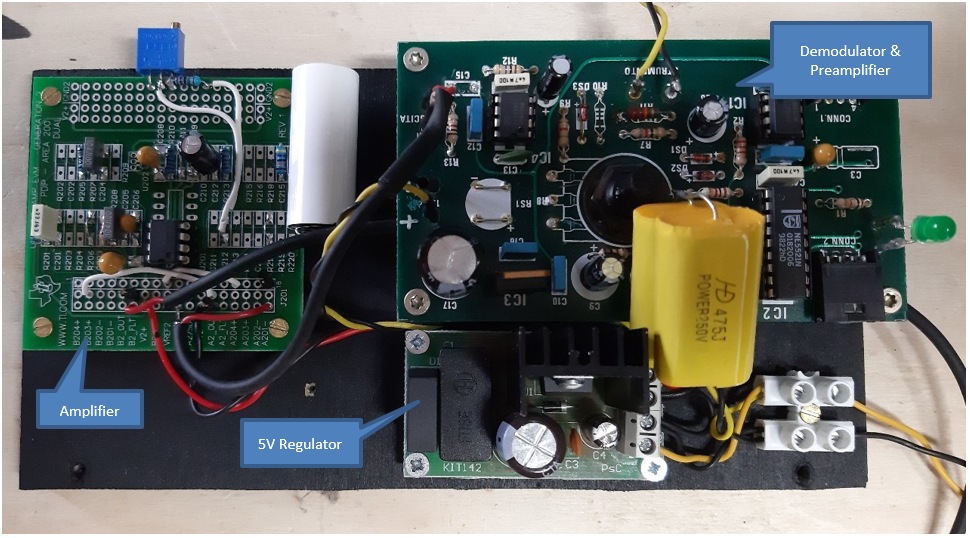 The seismometer position sensor is an LVDT type transducer (inductive displacement transducer). This transducer is an electrical device that allows the measurement of a linear displacement.

The transducer is usually made of a tube with three windings arranged with parallel axes and with a mobile ferromagnetic cylindrical core inside, normally characterized by a high magnetic permeability. The central winding is called primary and the other two, secondary windings: the primary winding is connected to an AC voltage generator, at the ends of the secondary windings the output voltage is measured. When the voltage is applied to the primary, an electromotive force is induced on the other two due to the mutual inductions between the windings.

When the core is in the center, the voltage induced on the secondary windings, being these wound in a discordant sense, is the same but opposite, so that the measured voltage signal is practically zero. When the nucleus moves, instead, the mutual inductances change, and depending on whether it moves to the left or to the right, the inductive coupling with the secondary left or right will be greater. Consequently the output signal will vary proportionally to the displacement of the core.

So-called phase discriminator demodulators are used to read the LVDT output signal. These are electronic devices that allow you to extract the effective value of the voltage that represents the displacement, and interpret from which part of the zero the displacement takes place. The best known of all uses a double Graetz bridge that straightens the alternating signal coming from the secondary windings and makes the algebraic sum. Depending on the sign of the sum, it is possible to understand from which part of the zero the displacement occurred.

LVDT is a very sensitive transducer able to measure displacements of the order of micrometers. Depending on the power supply frequency of the primary and the core mass, there are cutting frequencies of some hundreds of hertz and therefore good dynamic responses to rapidly variable displacements over time.

In our case, two primary coils (exciters) and two secondary coils (detectors) were used. The image below shows the ferrite core, integral with the movable arm, free to move inside the excitation and detection coils.

The drawing below shows the principle diagram of the LVDT transducer and the connections with the integrated circuit that carries out the signal demodulation operation. 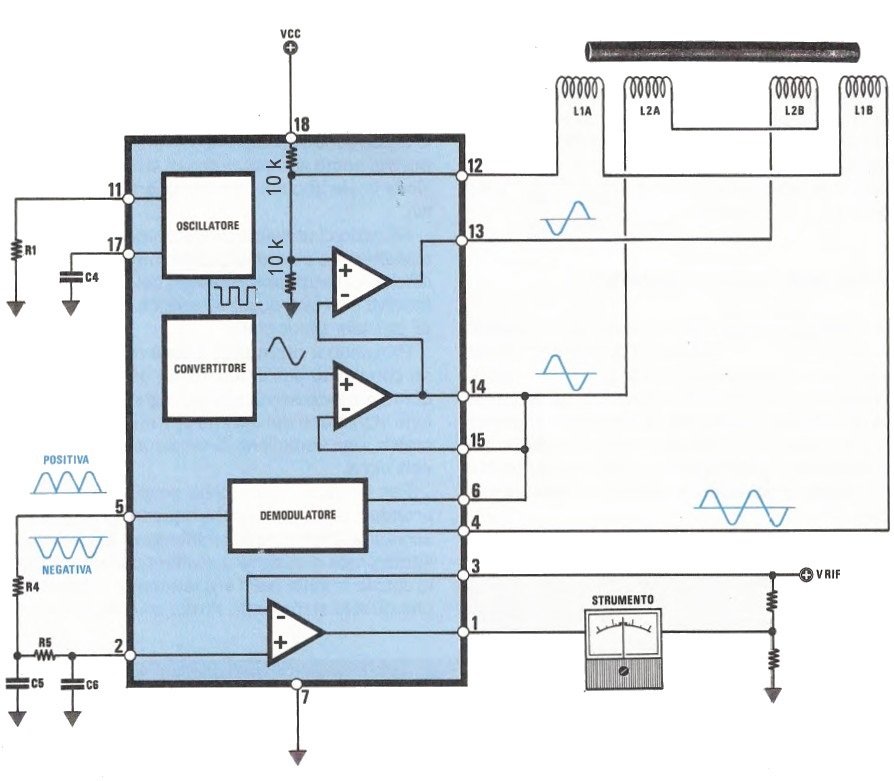 The image below shows the ferrite core, the sensor coils and the connections to the signal demodulation and preamp circuit. 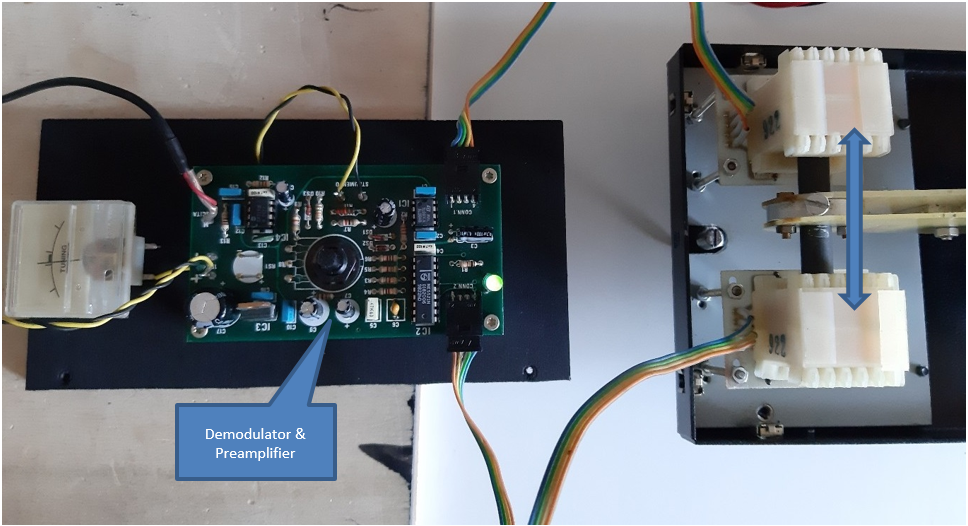 The LVDT sensor is managed by the integrated NE.5521 which drives the two exciter coils L2 and demodulates the signal picked up by the L1 detection coils. What you get is a continuous voltage proportional to the displacement of the ferrite core.
The signal obtained from the demodulator component is applied to the low-pass filter consisting of the components R4, R5, C5 and C6 which give a cut-off frequency of 20 Hz. At the output of the operational unit present in the integrated circuit we will therefore have a continuous voltage.
A balanced circuit, that is with the ferrite core perfectly centered inside the coils, we will find a continuous voltage of 6 V. If the ferrite core moved to the right or left, the voltage would have a value less than or greater than 6 V.

In the presence of a seismic wave, the ferrite core, stimulated by this vibration, will move with respect to the four coils of a few thousandths of a millimeter, resulting in a voltage that will faithfully reflect the frequency of the seismic wave.

The images below show the diagram of the electrical circuit and a drawing with the wiring diagram. The details with the explanations of the circuit can be found in the issue of the “new electronics” magazine: Nuova Elettronica 130. Compared to the original circuit, some improvements have been made according to the following links: 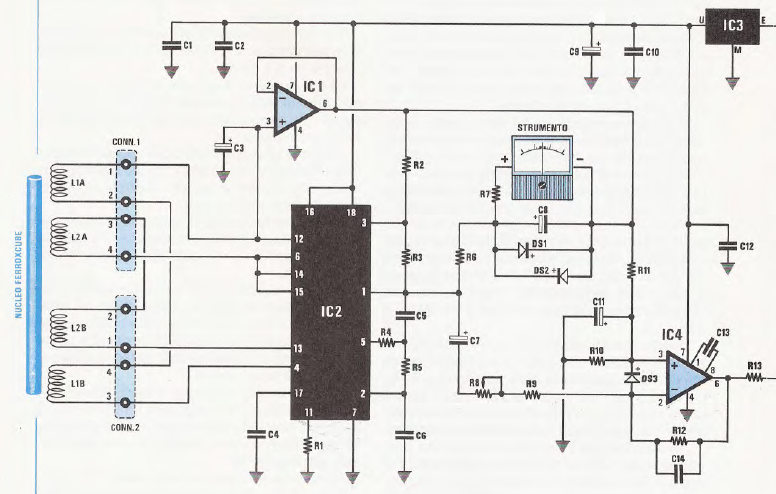 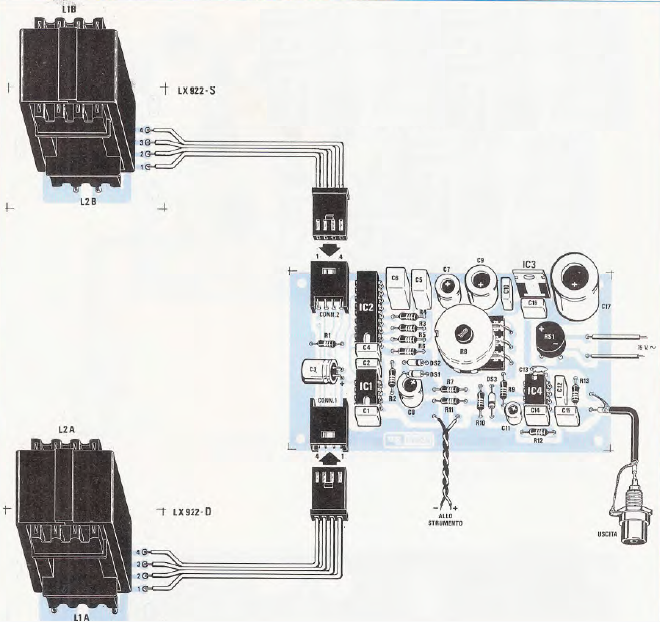 The signal conditioning circuit was created taking inspiration from the circuit presented in the second issue of the magazine “nuova elettronica”. The diagram is shown in the image below. In practice it is a high-pass filter that eliminates the DC component of the signal. The filter consists of a parallel of five 1μF polyester capacitors (we have installed a single 4.7 μF capacitor) followed by an amplifier with adjustable gain with the R4 trimmer, the gain is adjustable from 1 to 5 times.
This amplifier moves the signal centered around the average value of 2.5 V. The next stage is a low-pass filter of 12dB per octave with a cut-off frequency of 10 Hz so as to let only the subsonic frequencies of the seismic waves pass.

The signal (with 0 – 5 V range) is then sent to the ADC conversion stage. The sampling frequency of the signal must be from 50 to 100 Hz in order to cover the entire frequency range of the filtered signal.

The strong points of the PSoC are the ease of use and programming combined with a rich set of ready-made HW/SW components that easily integrate with each other. The clock speed is medium-high, up to a maximum of 80MHz.

The analog signal of the seismometer is acquired by an ADC converter with a resolution of 20 bit with a sampling frequency of 100 samples per second. The diagram below shows the ADC module configured for signal acquisition. 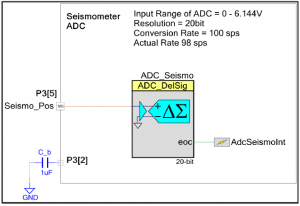 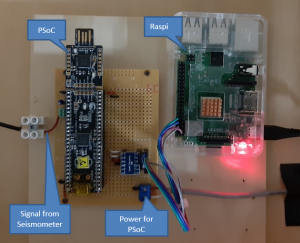 The software for the acquisition and management of seismic data was written in python. The data are stored in MiniSEED format (mseed), a file is produced for each day. The MiniSEED format is a subset of the more detailed SEED format (Standard for the Exchange of Earthquake Data), which was created with the aim of standardizing the exchange of seismological data between the various scientific communities.
For data processing we use in particular the Python ObsPy library: ObsPy is an open source project dedicated to providing a Python framework for processing seismological data. It provides parsers for common file formats, clients to access data centers and seismological signal processing routines that allow the manipulation of seismological time series. Using the plot function (with parameter dayplot) it is easy to create a graph with the representation of the seismogram. The following image shows a typical graph obtained with the obspy plot function. 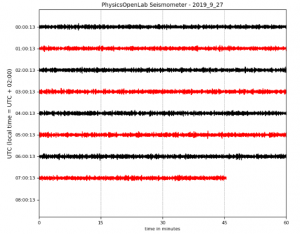 Files in mseed format with recording data can be viewed and processed with many software products. We found very good the open software SeisGram2K, it is an easy to use and platform independent Java software package, it is used for interactive visualization and seismogram analysis. SeisGram2K executes and reads data files both locally and on the Internet, we used it in local mode. The image below shows the initial screen of the program. 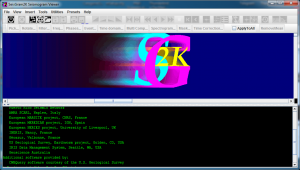 After the data file is loaded, the corresponding seismogram is displayed. The image below shows an example. The software also makes available many features for the analysis of the seismogram, as an example we have : spectrum analysis, spectrogram, waveform filtering and determination of the distance of the hypocenter through analysis of S and P waves. 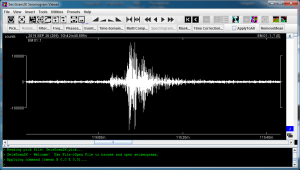