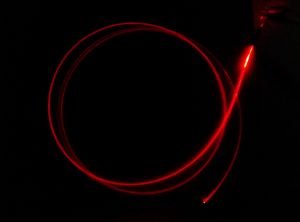 Optical fibers are filaments of glassy or polymeric materials, made in such a way as to be able to carry light inside them (guided propagation), and which find important applications in telecommunications, medicine, sensors and lighting technology.

Optical fibers typically include a core surrounded by a transparent cladding material with a lower index of refraction. Light is kept in the core by the phenomenon of total internal reflection which causes the fiber to act as a waveguide. Fibers that support many propagation paths or transverse modes are called multi-mode fibers, while those that support a single mode are called single-mode fibers (SMF). Multi-mode fibers generally have a wider core diameter and are used for short-distance communication links and for applications where high power must be transmitted 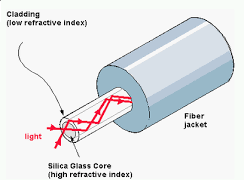 A simple LED can be conveniently used to introduce the light into the fiber. The fiber head should be placed on the LED lens and fixed with a heat-shrink tube, everything should be covered with a larger tube in order to maximize the amount of light introduced into the fiber. The images shown below show a coupling between a 2mm fiber and a blue LED. An equally simple alternative method consists of making a hole in the LED coating in which the fiber is inserted and glued.

The optical fiber was coupled with a photodiode, the Hamamatsu S1337 model (but an equivalent component could also be fine) through the “device” shown in the images below : these are two wooden blocks painted black that lead to close contact fiber and photodiode and ensure that the photodiode is reached only by the light carried by the fiber.

An interesting aspect of optical fibers is their use as sensors. The transmission of light within the fiber is altered by interactions with the external environment : pressure, temperature, mechanical stress on the fiber modify the light transmission process which then carries this information along the entire fiber to the detector placed at the end, which converts it into an electrical signal that is therefore affected by the interactions suffered by the fiber.

Very often these properties of optical fibers are optimized (for example by incorporating diffraction gratings into the fiber) in order to maximize the possibilities of use as remote sensors.

A simple example of this mode of use is the self-interference technique of the light that runs in the fiber, sensitive even to small changes in the length of the optical path. These can be easily obtained by fixing the fiber to an elastic support, for example by gluing the fiber onto a thin plastic shelf, and by imparting bending to this support and causing it to oscillate. The oscillations lengthen and compress the fiber producing modulations in the intensity of the light transmitted by the fiber.

The images below show the layout of the equipment and a realization obtained with a drawing tool fixed to the table by means of a clamp.

In the images below you can see the traces of the oscilloscope that are obtained when the plastic cantilever with the fiber glued is put into oscillation. The signal corresponds to the fiber output light intensity measured by the photodiode. As can be clearly seen from the graphs, an oscillating trend with exponential damping is obtained, as was to be expected. From the analysis of the oscillation we can derive the natural frequencies of mechanical resonance of the shelf.
The first graph below corresponds to the oscillation of the shelf in the absence of load. 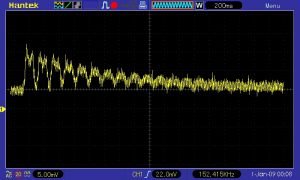 Even the second graph below corresponds to the oscillation of the shelf in the absence of load, but represented on a longer time scale to highlight the exponential damping. 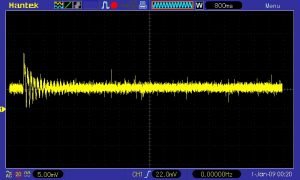 In the third chart we represent the trend of the oscillation of the shelf with a load (just a weight) applied to the free end : in this case the oscillation has a lower frequency and a longer duration (compare with the previous graph). Also in this case the result corresponds to the expectations and confirms the behavior known from the laws of mechanics. 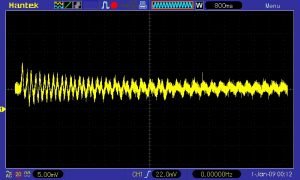