(From Wikipedia) Fiber diffraction is a subarea of scattering, an area in which molecular structure is determined from scattering data (usually of X-rays, electrons or neutrons). In fiber diffraction the scattering pattern does not change, as the sample is rotated about a unique axis (the fiber axis). Such uniaxial symmetry is frequent with filaments or fibers consisting of biological or man-made macromolecules. In crystallography fiber symmetry is an aggravation regarding the determination of crystal structure, because reflexions are smeared and may overlap in the fiber diffraction pattern. Materials science considers fiber symmetry a simplification, because almost the complete obtainable structure information is in a single two-dimensional (2D) diffraction pattern exposed on photographic film or on a 2D detector.

The ideal fiber pattern exhibits 4-quadrant symmetry. In the ideal pattern the fiber axis is called the meridian, the perpendicular direction is called equator. In case of fiber symmetry, many more reflexions than in single-crystal diffraction show up in the 2D pattern. In fiber patterns these reflexions clearly appear arranged along lines (layer lines) running almost parallel to the equator. Thus, in fiber diffraction the layer line concept of crystallography becomes palpable. Bent layer lines indicate that the pattern must be straightened. Reflexions are labelled by the Miller index hkl, i.e. 3 digits. Reflexions on the i-th layer line share l=i. Reflexions on the meridian are 00l-reflexions. In crystallography artificial fiber diffraction patterns are generated by rotating a single crystal about an axis (rotating crystal method).

Fiber diffraction data led to several important advances in the development of structural biology, e.g. the original models of the α-helix and the Watson-Crick model of double-stranded DNA as depicted in the following classic diffraction pattern obtained from DNA : 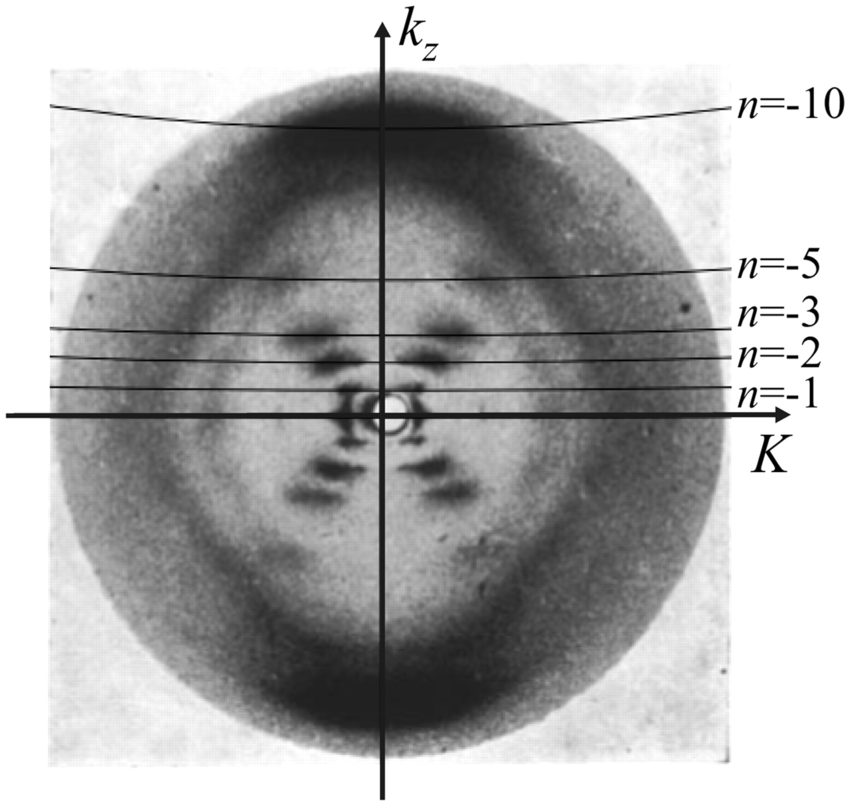 In the paragraphs below we show some examples of x-ray diffraction obtained from samples which have fibrous structure. 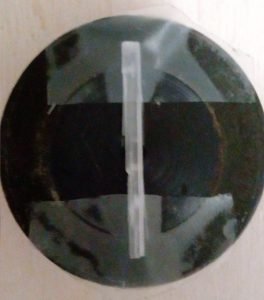 All varieties of gypsum, including selenite and alabaster, are composed of calcium sulfate dihydrate (meaning that it has two molecules of water), with the chemical formula CaSO4·2H2O.

Satin Spar in made of a number of crystalline fibers of gypsum. The images below show a sample of Satin Spar and some crystal fibers viewed through a microscope at increasing magnifications. The fibrous structure is preserved also at high magnifications. In the image aside there is a small sample of satin spare ready to be analyzed through x-ray diffraction

In the image below there is the x-ray diffraction pattern obtained from a fiber of satin spar. The fiber has been placed vertically, so the rotation axis is vertical and is indicated by the dashed line. The line in the middle of the picture – perpendicular to the axis – is the so-called equator, it can be seen another line, which should correspond to the first layer. 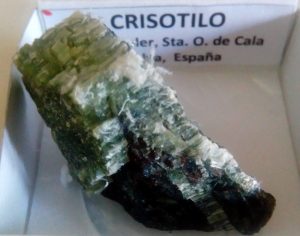 Chrysotile or white asbestos is the most commonly encountered form of asbestos, accounting for approximately 95% of the asbestos in the United States and a similar proportion in other countries. It is a soft, fibrous silicate mineral in the serpentine subgroup of phyllosilicates; as such, it is distinct from other asbestiform minerals in the amphibole group. Its idealized chemical formulais Mg3(Si2O5)(OH)4. The material has physical properties which make it desirable for inclusion in building materials, but poses serious health risks when dispersed into air and inhaled. In the image aside there is a sample of Chrysotile.

In the image below there is the x-ray diffraction pattern obtained from a fiber of chrysotile. The fiber has been placed vertically, so the rotation axis is vertical and is indicated by the dashed line. In the image it can be seen the line in the middle : the so-called equator. 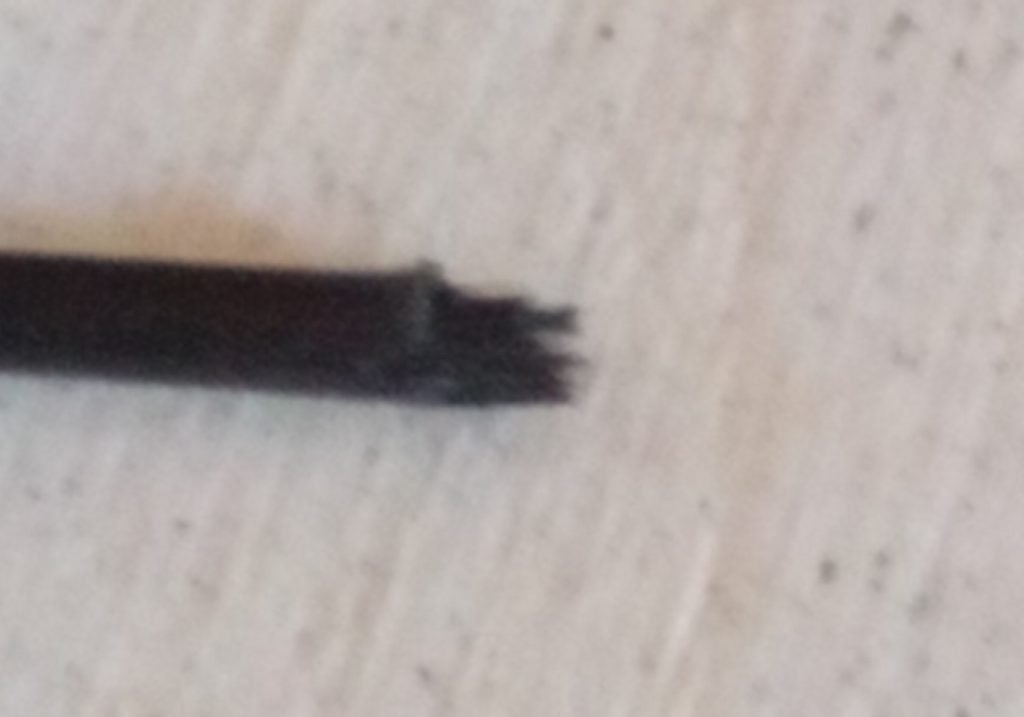 Carbon fibers or carbon fibres (alternatively CF, graphite fiber or graphite fibre) are fibers about 5–10 micrometres in diameter and composed mostly of carbon atoms. Carbon fibers have several advantages including high stiffness, high tensile strength, low weight, high chemical resistance, high temperature tolerance and low thermal expansion. These properties have made carbon fiber very popular in aerospace, civil engineering, military, and motor sports, along with other competition sports. However, they are relatively expensive when compared with similar fibers, such as glass fibers or plastic fibers.

The atomic structure of carbon fiber is similar to that of graphite, consisting of sheets of carbon atoms arranged in a regular hexagonal pattern (graphene sheets), the difference being in the way these sheets interlock. Graphite is a crystalline material in which the sheets are stacked parallel to one another in regular fashion. The intermolecular forces between the sheets are relatively weak Van der Waals forces, giving graphite its soft and brittle characteristics.

The image above shows a small rod made of several carbon fibers. The image below shows the x-ray diffraction pattern in which there is some evidence of symmetry. 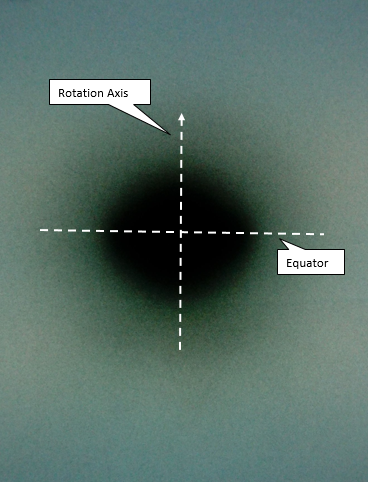