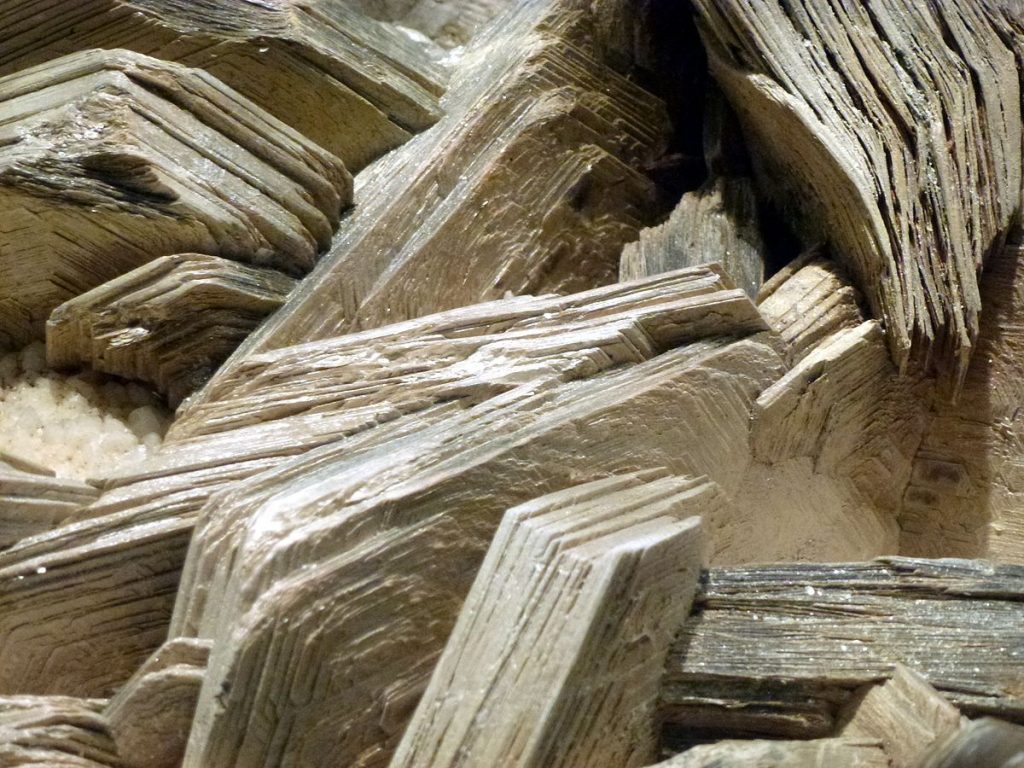 The structure of Mica

The mica group of sheet silicate (phyllosilicate) minerals includes several closely related materials having nearly perfect basal cleavage. All are monoclinic, with a tendency towards pseudohexagonal crystals, and are similar in chemical composition. The nearly perfect cleavage, which is the most prominent characteristic of mica, is explained by the hexagonal sheet-like arrangement of its atoms.

Chemically, micas can be given the general formula

The molecules of micas are structured in the following way: they are formed by tetrahedra in which a silicon atom is placed in the center while four oxygen atoms are arranged at the vertices, these tetrahedrons are joined by three of their vertices to form hexagonal meshes; the other chemical elements forming the micas are placed at the center of an octahedron, while at the top of these octahedra are atoms of oxygen or groups of hydroxyl groups; a layer of octahedrons is arranged between two layers of tetrahedra. The vertices of the tetrahedrons and octahedra are bound together. This set of three layers is called a “package”. The alkali metals are arranged between one package and another. The forces that hold alkaline metals together in packets are weak, while the forces within the pack are strong. This fact would explain the flaking of the lamellar micas.

The image below shows this crystalline structure. 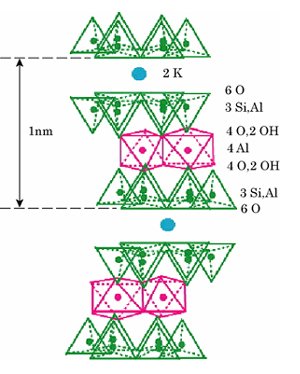 Biotite is a common phyllosilicate mineral within the mica group. More generally, it refers to the dark mica series, primarily a solid-solution series between the iron-endmember annite, and the magnesium-endmember phlogopite; more aluminous end-members include siderophyllite. Biotite was named by J.F.L. Hausmann in 1847 in honor of the French physicist Jean-Baptiste Biot, who performed early research into the many optical properties of mica.

Biotite is a sheet silicate. Iron, magnesium, aluminium, silicon, oxygen, and hydrogen form sheets that are weakly bound together by potassium ions. It is sometimes called “iron mica” because it is more iron-rich than phlogopite. It is also sometimes called “black mica” as opposed to “white mica” (muscovite) – both form in the same rocks, and in some instances side-by-side.

Like other mica minerals, biotite has a highly perfect basal cleavage, and consists of flexible sheets, or lamellae, which easily flake off. It has a monoclinic crystal system, with tabular to prismatic crystals with an obvious pinacoid termination

The images below show a sample of mica biotite, and a sheet subjected to X-ray diffraction. 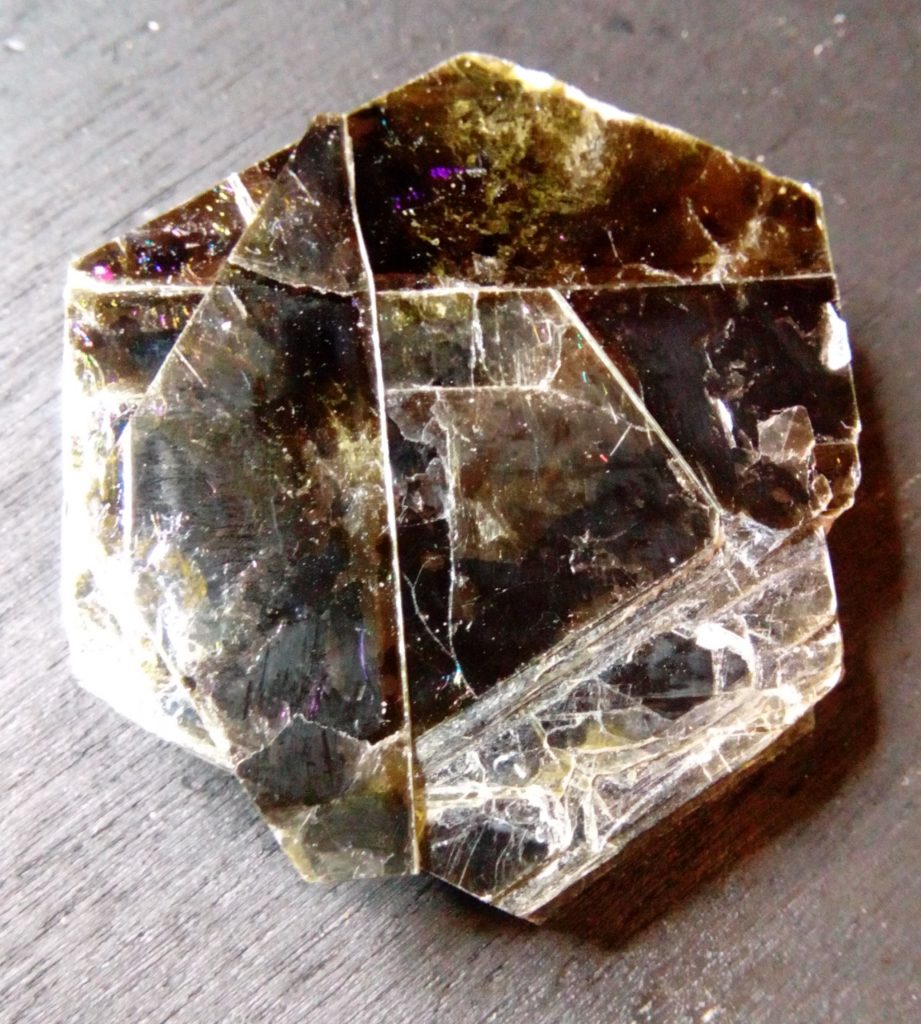 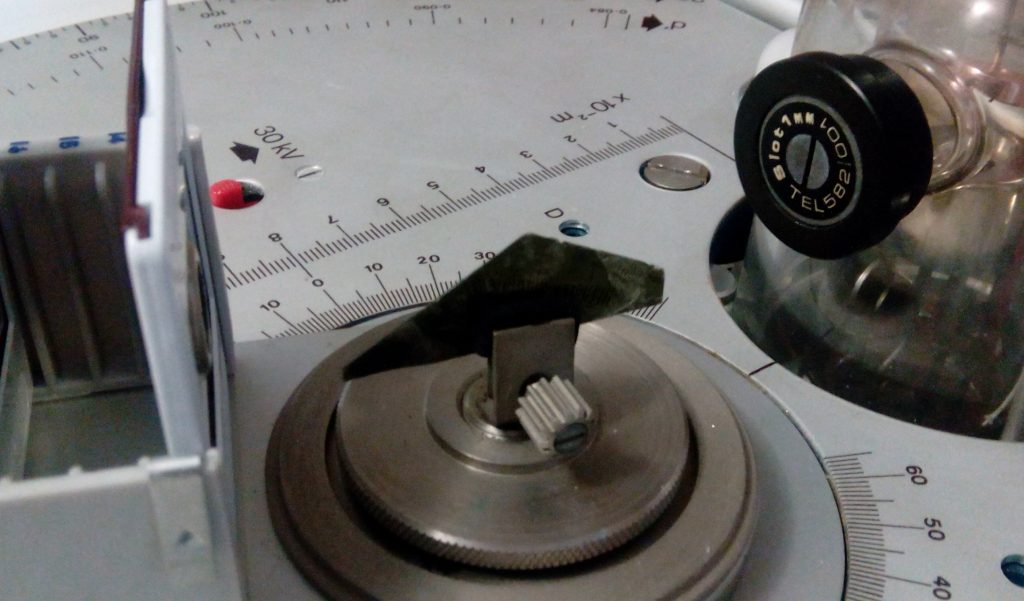 Diffractogram of a sheet of mica biotite.

The reflection corresponding to the 1nm lattice step was not detected due to the diffractometer which reaches a minimum angle of 10 °. The successive peaks correspond to the Bragg reflections produced by the various pairs of layers of the crystalline structure of the mica.

Laue Image of a sheet of mica biotite. 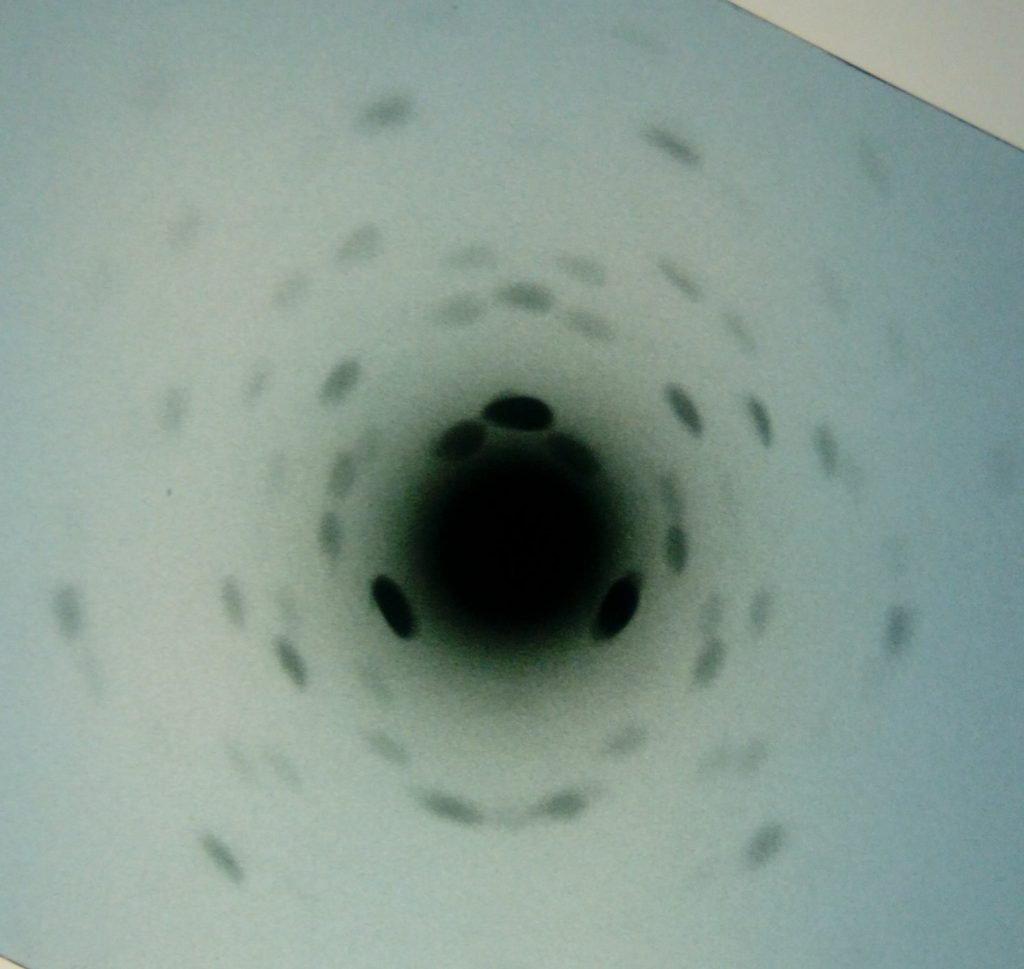 Muscovite (also known as common mica, isinglass, or potash mica) is a hydrated phyllosilicate mineral of aluminium and potassium. It has a highly perfect basal cleavage yielding remarkably thin laminae (sheets) which are often highly elastic.
It can be colorless or tinted through grays, browns, greens, yellows, or (rarely) violet or red, and can be transparent or translucent. It is anisotropic and has high birefringence. Its crystal system is monoclinic. The green, chromium-rich variety is called fuchsite; mariposite is also a chromium-rich type of muscovite.
Muscovite is the most common mica, found in granites, pegmatites, gneisses, and schists, and as a contact metamorphic rock or as a secondary mineral resulting from the alteration of topaz, feldspar, kyanite, etc. In pegmatites, it is often found in immense sheets that are commercially valuable. Muscovite is in demand for the manufacture of fireproofing and insulating materials and to some extent as a lubricant.

The images below show a sample of muscovite mica, a set of muscovite laminae, and a lamina placed in the diffractometer. 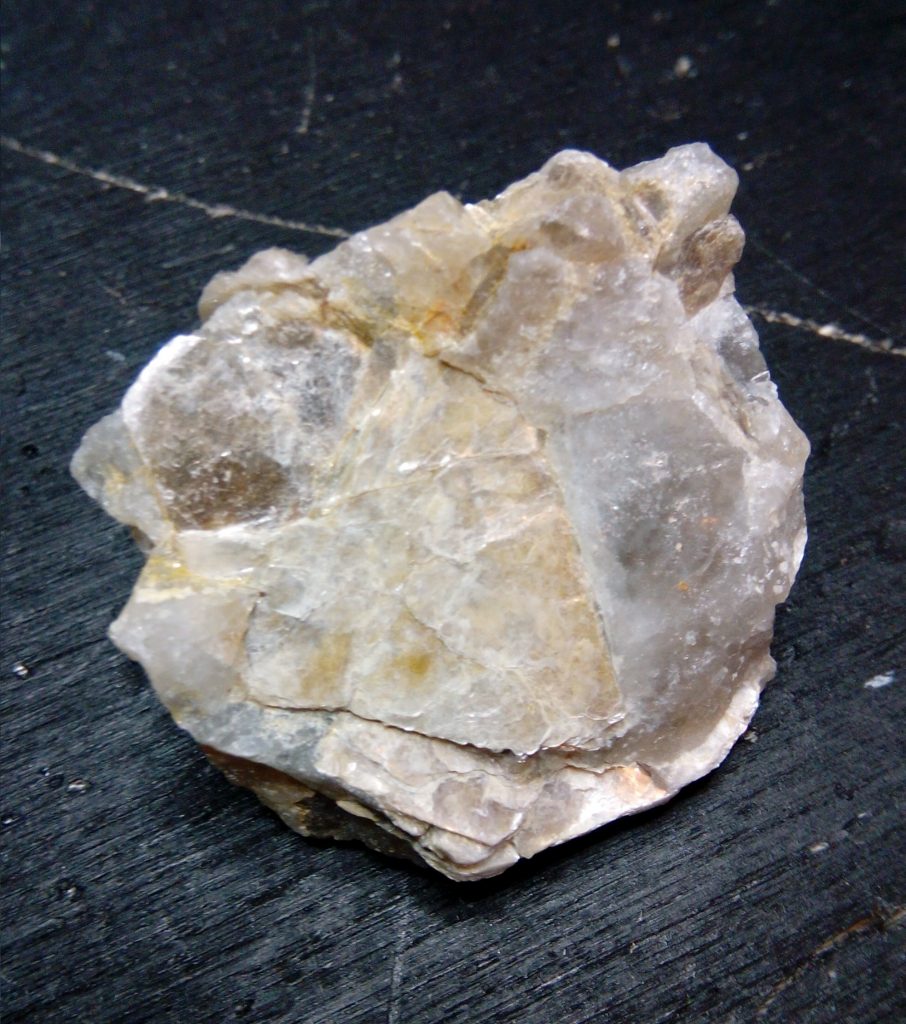 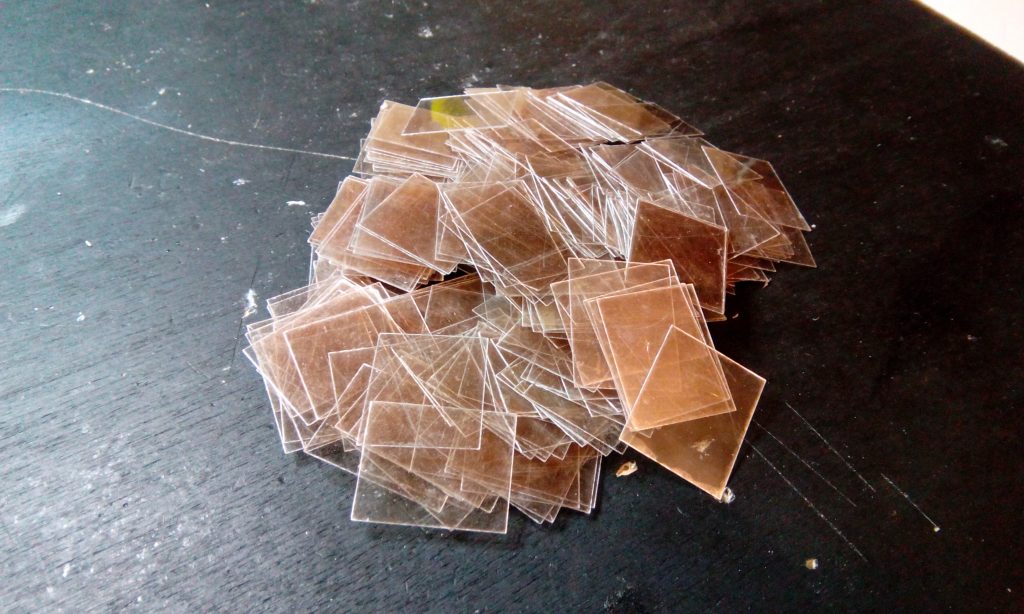 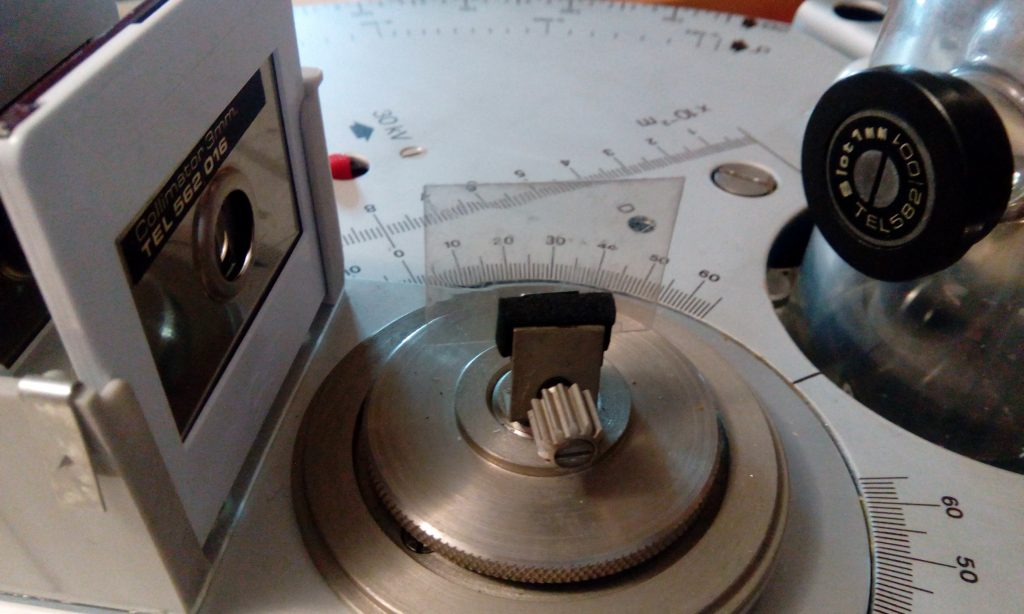 Diffractogram of a splinter of mica muscovite.

Diffractogram of a sheet of mica.

Laue image of a sheet of mica muscovite. 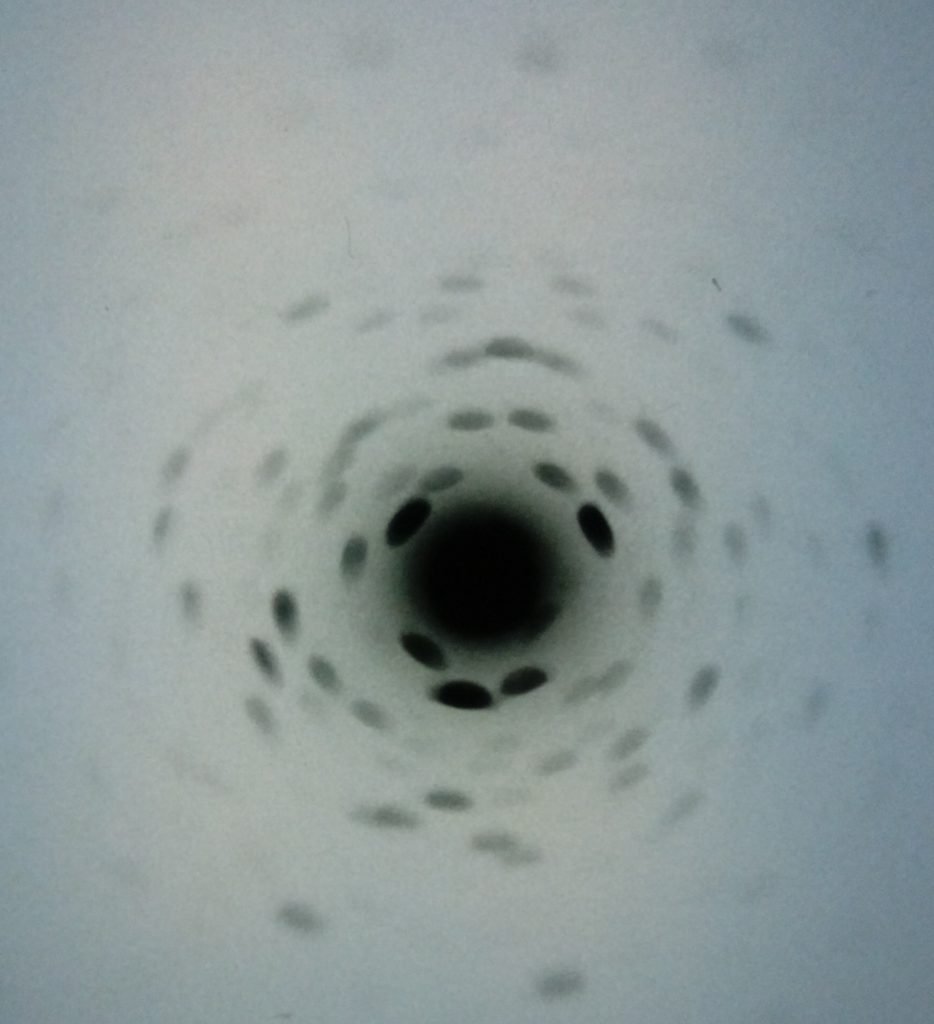 Lepidolite is a lilac-gray or rose-colored member of the mica group of minerals with formula K(Li,Al,Rb)2(Al,Si)4O10(F,OH)2. It is the most abundant lithium-bearing mineral and is a secondary source of this metal. It is a phyllosilicate mineral and a member of the polylithionite-trilithionite series.

The images below show a sample of mica lepidolite and a lamina placed in the diffractometer. 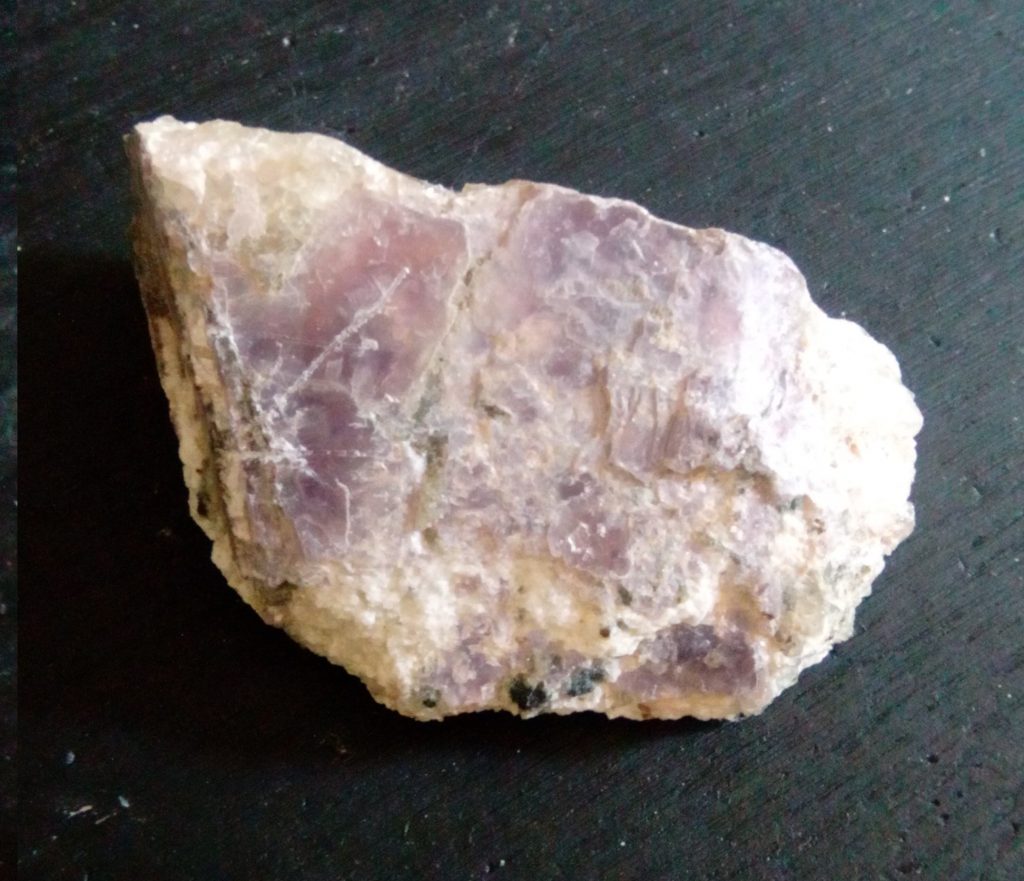 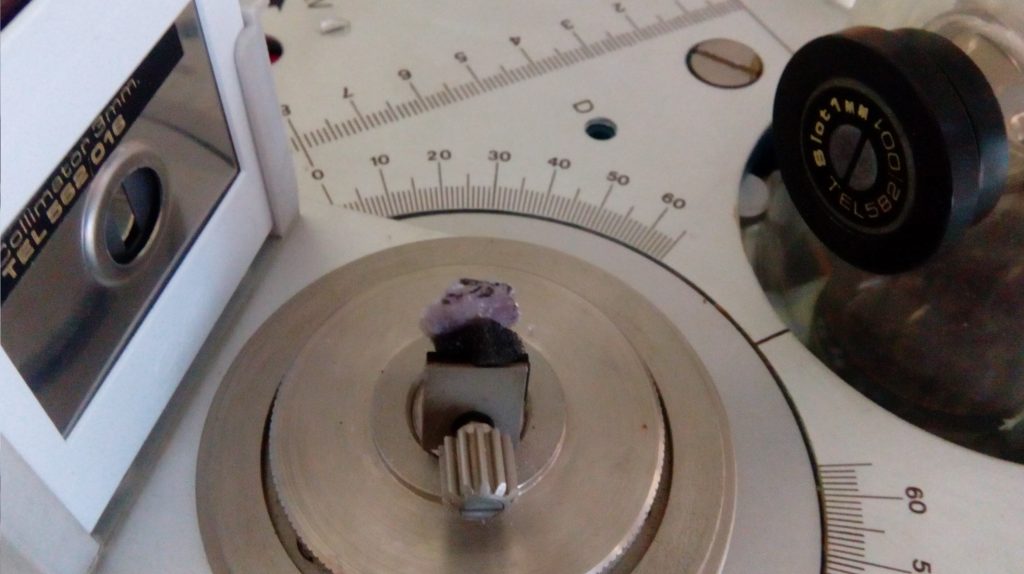 Mica is an interesting mineral mainly because of its crystalline structure that is directly and macroscopically reflected on its physical and mechanical properties. Its tendency to crumble into thin monocrystalline sheets means that it can be easily studied using techniques based on X-ray diffraction.