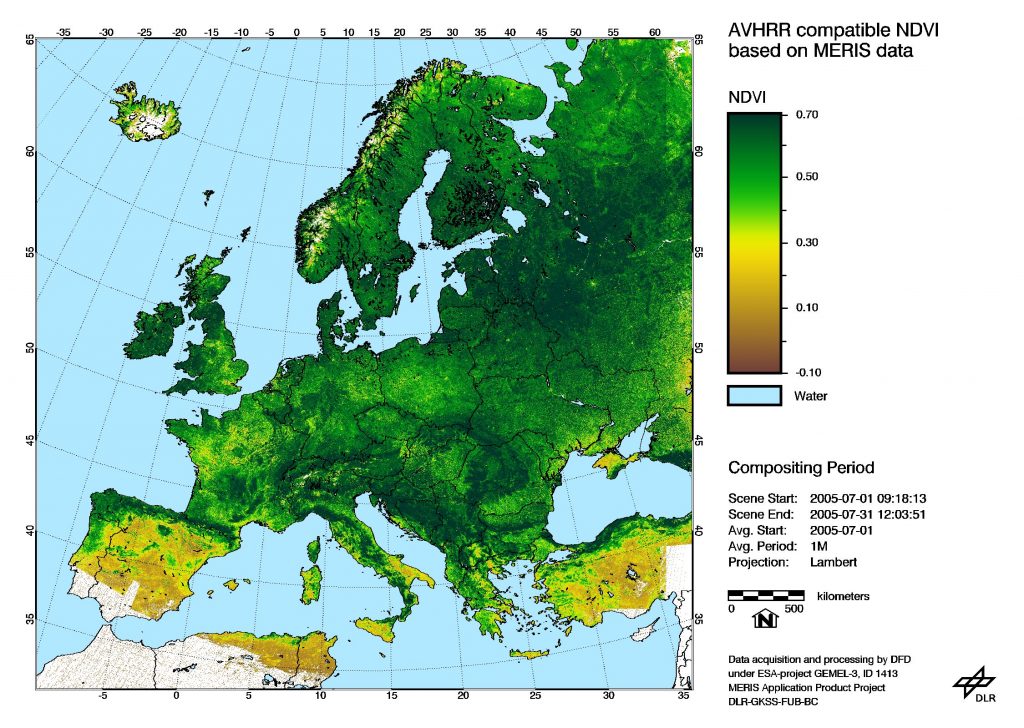 What is NDVI Index ?

Live green plants absorb solar radiation in the photosynthetically active radiation (PAR) spectral region, which they use as a source of energy in the process of photosynthesis. Leaf cells have also evolved to re-emit solar radiation in the near-infrared spectral region (which carries approximately half of the total incoming solar energy), because the photon energy at wavelengths longer than about 700 nanometers is not large enough to synthesize organic molecules. A strong absorption at these wavelengths would only result in overheating the plant and possibly damaging the tissues. Hence, live green plants appear relatively dark in the PAR and relatively bright in the near-infrared. By contrast, clouds and snow tend to be rather bright in the red (as well as other visible wavelengths) and quite dark in the near-infrared. The pigment in plant leaves, chlorophyll, strongly absorbs visible light (from 0.4 to 0.7 µm) for use in photosynthesis. The cell structure of the leaves, on the other hand, strongly reflects near-infrared light (from 0.7 to 1.1 µm). The more leaves a plant has, the more these wavelengths of light are affected, respectively.

As you can see in the image below, a healthy plant has a high absorption in the upcoming wavelengths to blue color and the color Red. Instead it reflects the green (for this see the plants of this color) and especially reflects much infrared (NIR) invisible to naked eye 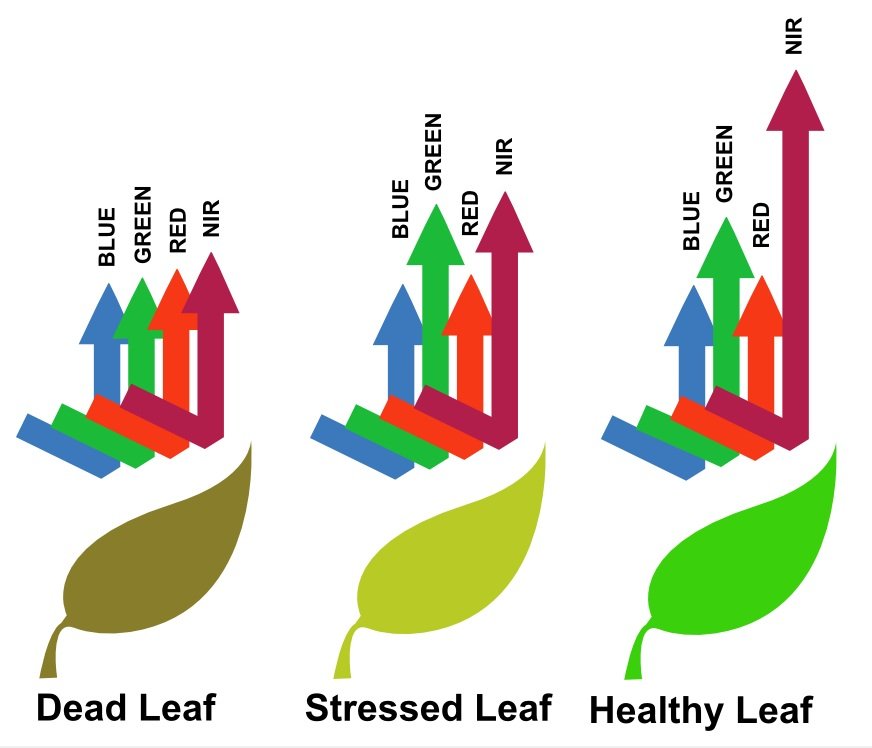 By way of example, also we report a photograph shot in the near infrared where it is clear that the brighter parts correspond to the foliage and grass, while the sky, the trunks and the paving will appear darker. 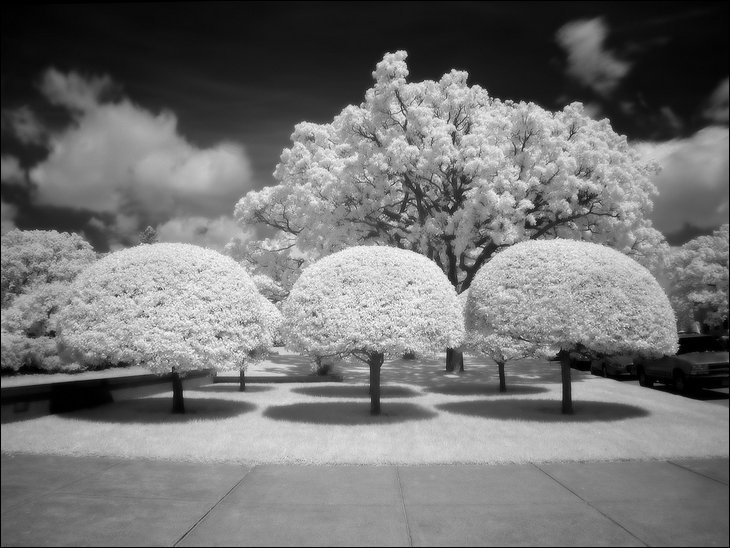 Using cameras sensitive both in visible and in near infrared we can calculate the ratio of the visible reflectance and near-infrared reflectance, making this ratio you get the “famous” NDVI, namely the vegetation vitality index. 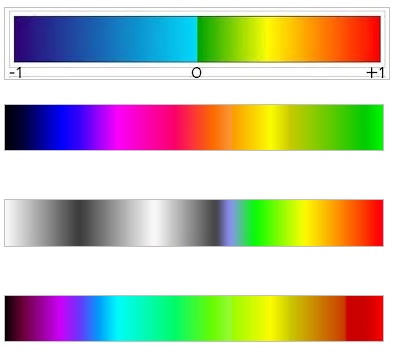 Specifically, the NDVI is calculated as follows:

where VIS and NIR stand for the spectral reflectance measurements acquired in the visible regions (red and/or blue) and near-infrared. The index has a chromatic scale that is used to quickly identify areas of vegetation stress from the most lush areas. To the left are represented some chromatic scales. Normally, the values range from +1 to -1, the positive values represent vegetation healthy while the negative, areas with dead vegetation, terrain or urban areas.

In the images below are represented two photographs : the first corresponds to a NGR photograph (near infrared, green, red), while the next corresponds to the image processed for the NDVI calculation. Red areas are rich in chlorophyll, you can discern very well cultivated fields, areas without vegetation (gray) and houses and roads (white / gray). 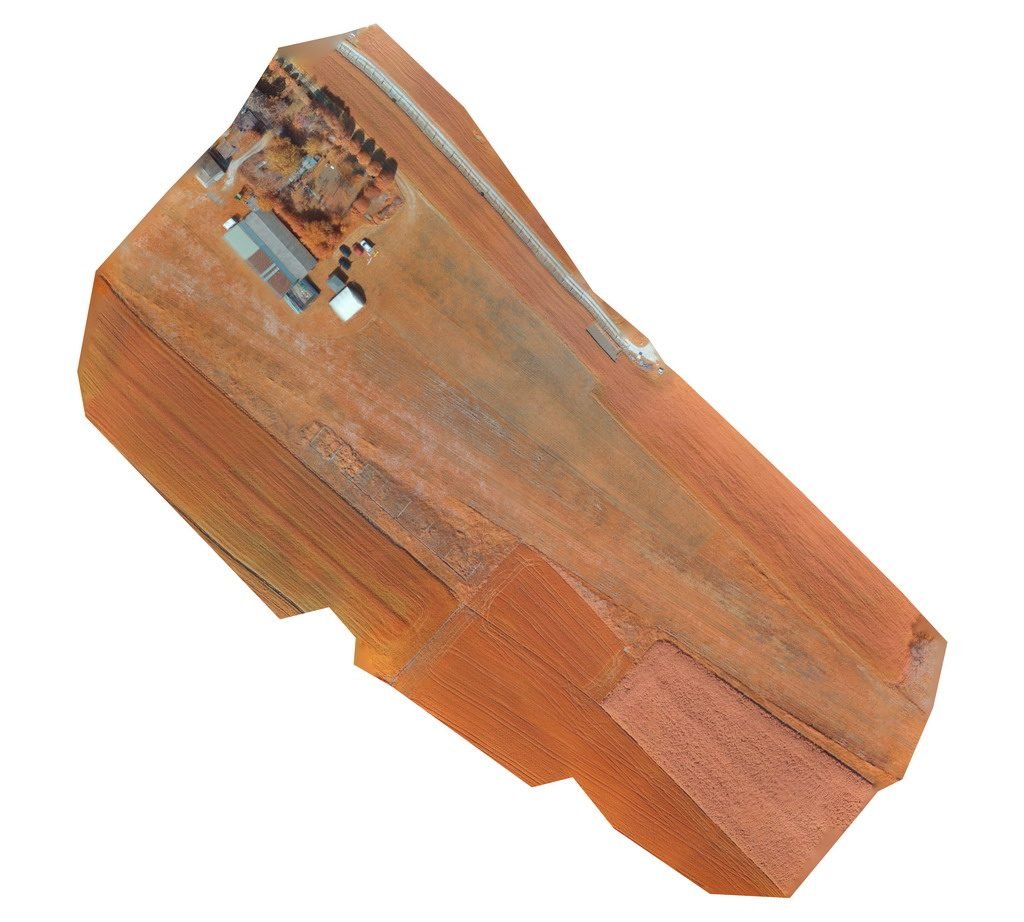 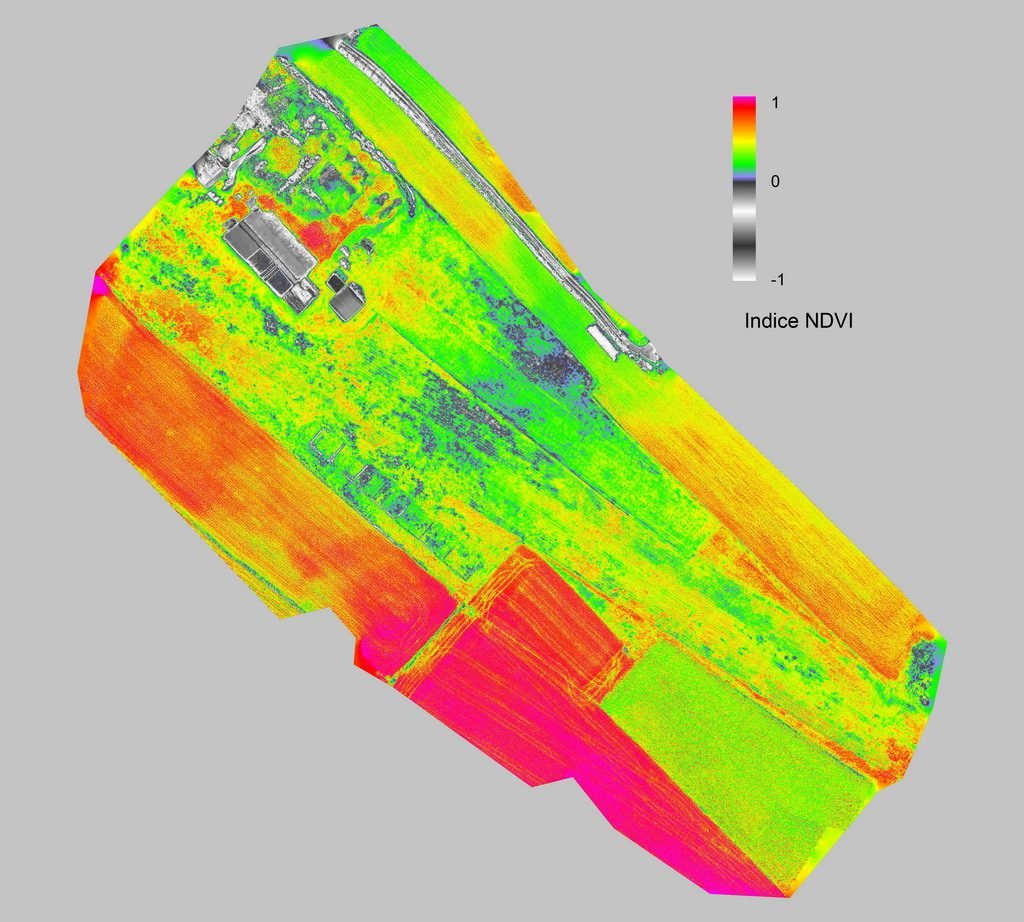 An inexpensive way to make a simple NDVI investigation is to use traditional cameras suitably modified. In fact, the sensor of the cameras has a very broad sensitivity even on infrared wavelengths as we can see from the picture below. 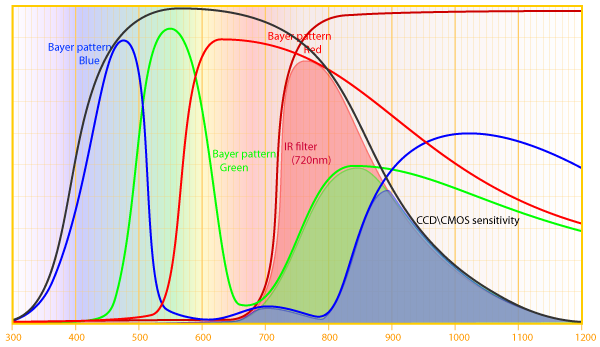 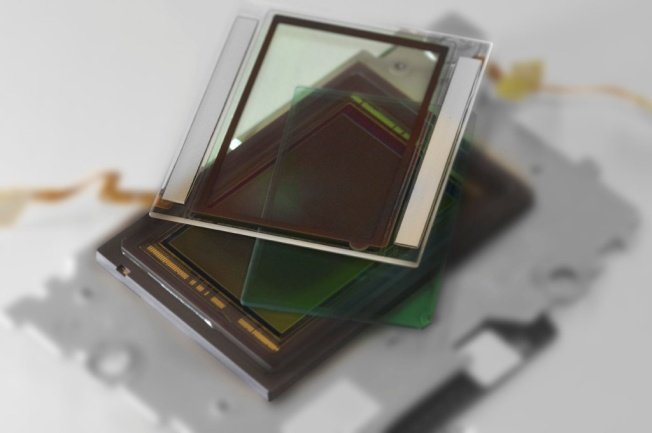 The CMOS  or CCD sensor is sensitive also to infrared radiation but in traditional photography this is not used, rather it is better to delete it, for this is mounted a filter in order to eliminate the infrared component that would produce an image with dominant pink.

In the picture on the left you see a CCD sensor with its anti-IR filter.

In our case, however, this filter should be removed to let the infrared light to be captured by the sensor, useful to calculate the NDVI. Digital cameras produce an image composed of three colors: red, green and blue (RGB). For our purpose we need to replace one color (RGB) with infrared. To do this you mount an external filter on the unit, in the example below the Blue. 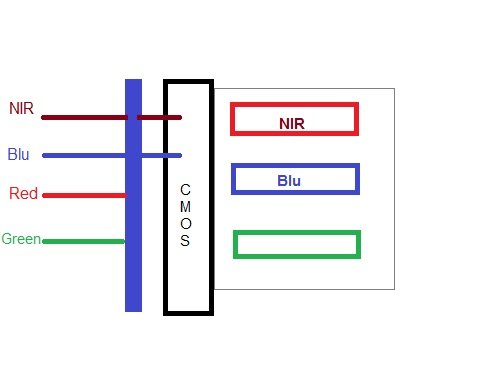 With this filter  green and red are stopped while the Blue and infrared pass (infrared is not stopped by the blue filter). So blue is recorded in the blue component and infrared enters the red component.
The result is a picture that has a component of the visible (blue band) and a component of infrared (red band).
The green component continuous to be recorded because the sensor has a very wide extension of the colors, for which the green encroaches part also in the blue and red, for this we will also find the green component in the image, but it will not be used for the computation.

Returning to the formula that we have seen before we can replace the visible component with the Red or Blue:

Actually the NDVI index can be calculated either with the blue spectrum or with red spectrum. Both coupled with the NIR (Near Infrared). But which formula to choose? Better to use the NDVI with blue or NDVI with the Red? What are the differences? And what should you use?

Some studies state that the NDVI with the red spectrum is more distributed and precise compared to the blue spectrum. 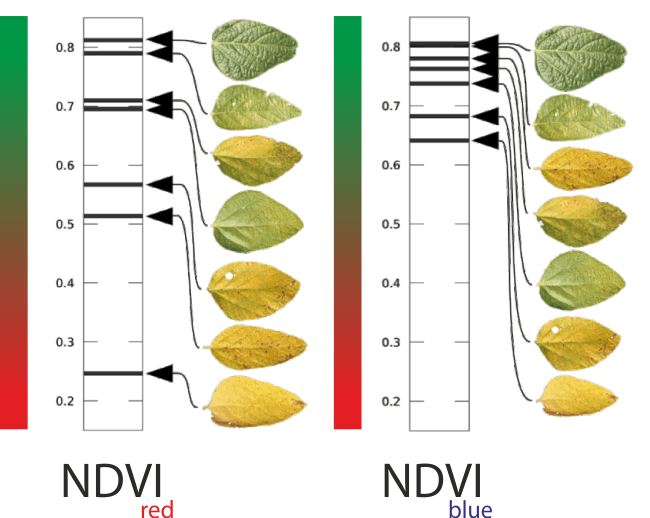 So the NDVI with the blue spectrum is to be discarded ? Of course not. The blue spectrum is further away from the red spectrum than the NIR. It is therefore more suitable to cameras with single filter, in this case, with a single camera, it is possible to calculate the NDVI. In general you have to experiment in order to find the most suitable filter to obtain the best pictures.

For our tests, we used an “action cam” in place of a traditional camera. This is the Mobius Action Cam that offers a good quality/price ratio. The camera can easily be dismantled and the IR filter can be removed and replaced with red or blue filter with relative ease. In the images shown below you can see the camera both closed and dismantled, with the red filter on the lens. Comprehensive tutorials can be found at the following link: Infragram 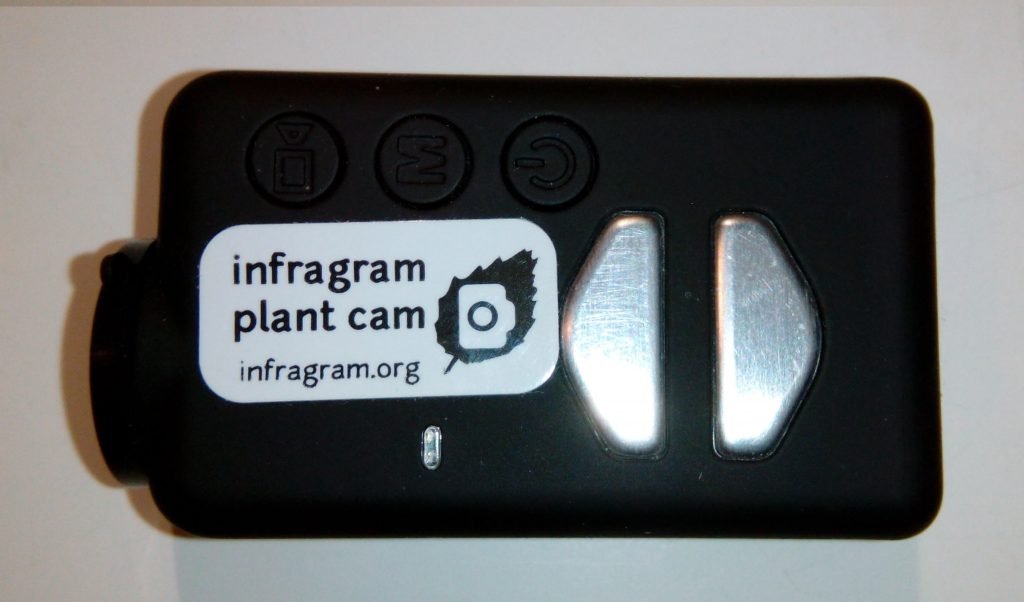 Crop monitoring from above with the drones is becoming cheaper. The application Theremino NDVI converts images that contain both blue/red and infrared, in false-color images that display the NDVI index and show the vegetation health. 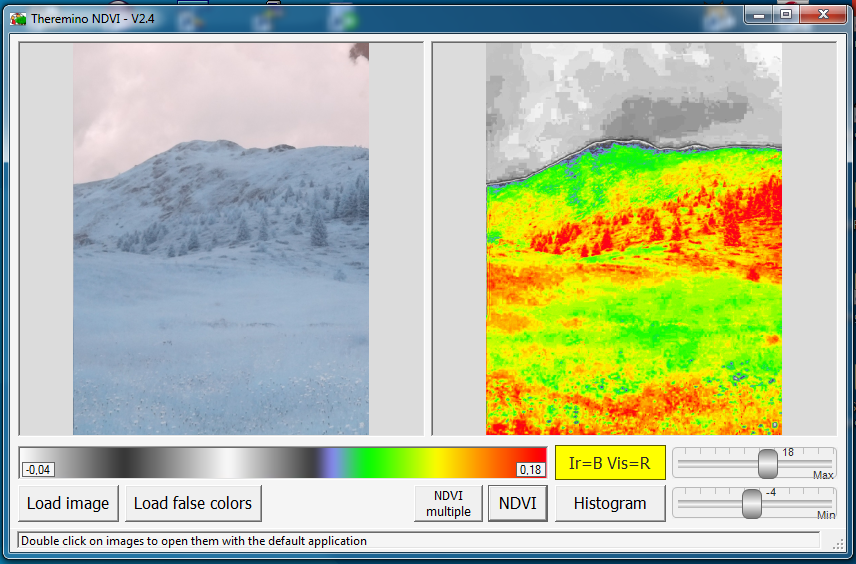 The following table shows some examples of NDVI images obtained with mobius action cam and the Theremino NDVI software. It is evident that the richest areas of vegetation are those whith a higher value of NDVI. 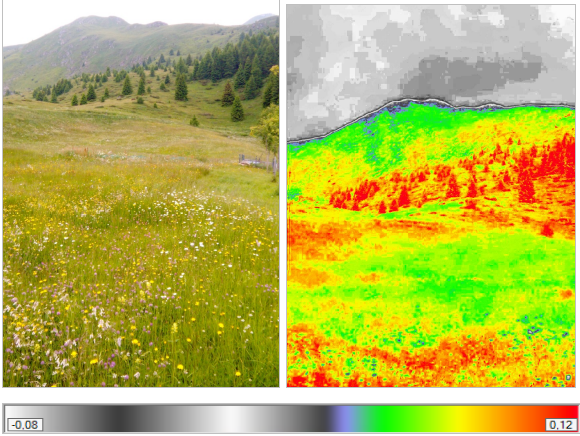 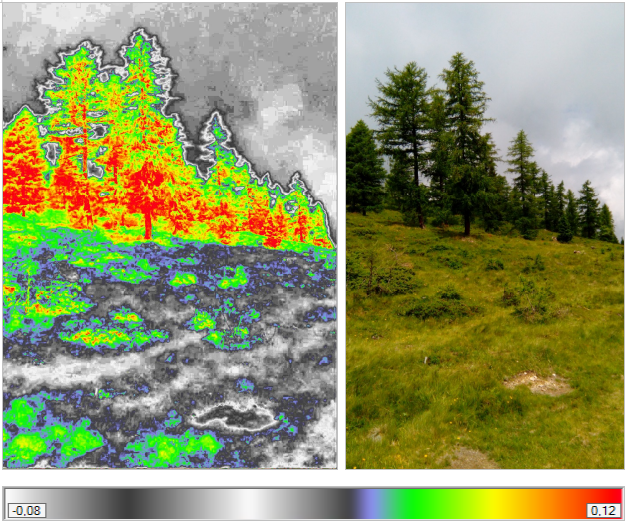 The following image is interesting because it shows 5 leaves: the first was just disconnected from the plant, the subsequent have been detached from the plat a day away from each other, the last leaf of the image on the right is the oldest, having been separated for four days.
The NDVI image clearly highlights the different “vitality” of the five leaves. 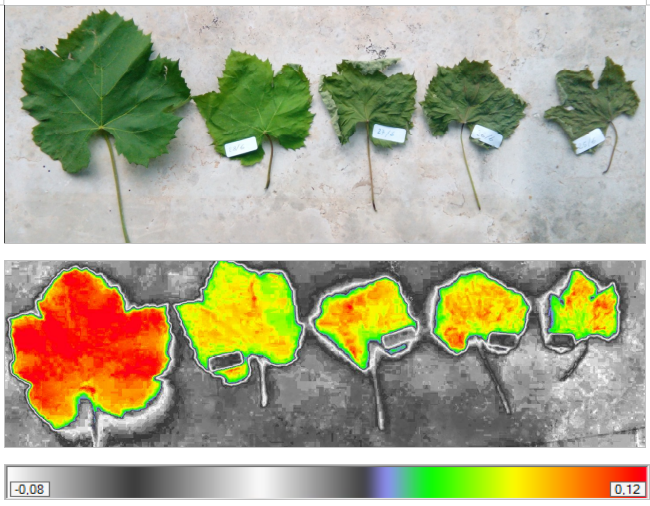