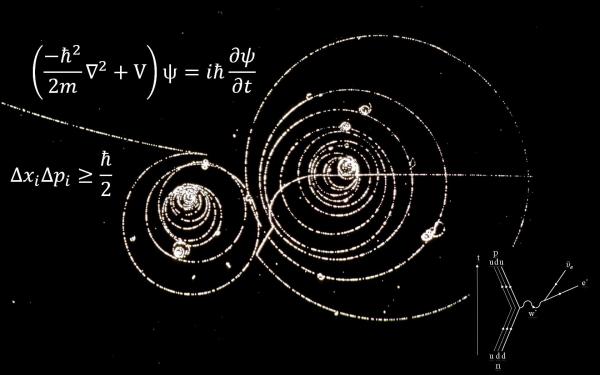 In this post we describe the measures taken with a Webcam used as “Particle Detector” using the application “Theremino Particle Detector”. Measurements have been made by placing the source close to the Webcam, the figure below shows the typical setup used. 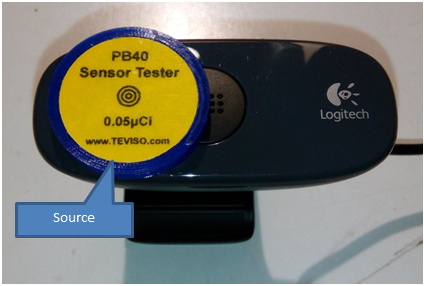 The following common sources have been used :

Americium is a chemical element with atomic number 95. Its symbol is Am. Americium is a synthetic metallic element of the actinide family, obtained by bombarding plutonium with neutrons. It decays alpha in Neptunium – 237 with a half-life of about 400 years, in its decay also emits gamma radiation at about 59keV and 26keV 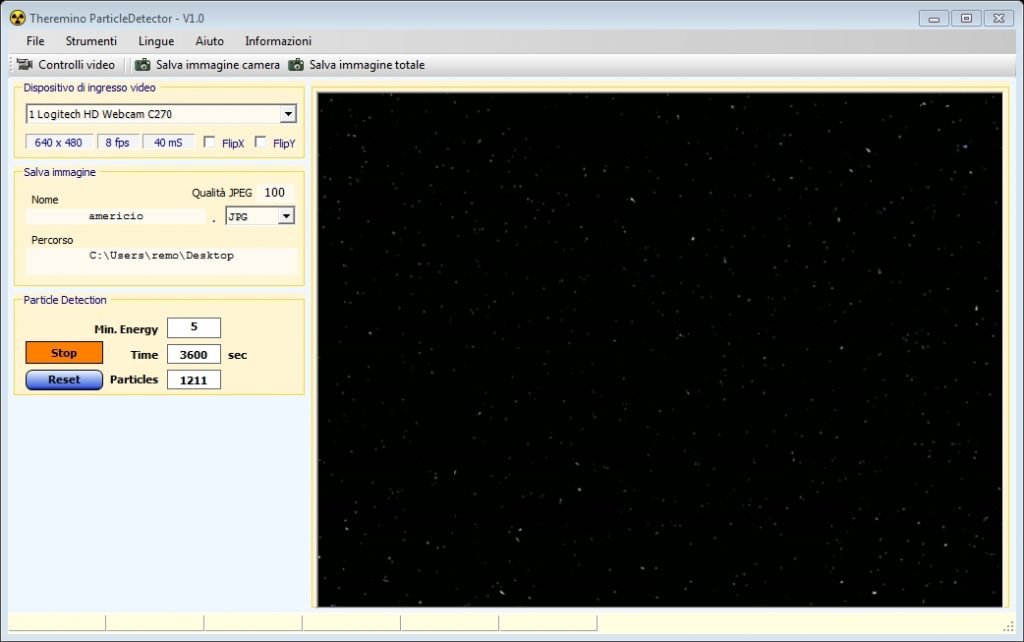 Source = Americium (241Am) 1μCi
Time = 3600s
Particles = 1211
CPS = 0,336
The CMOS sensor does not detect alpha particles, so the points that you see in the image are due to gamma rays emitted by 1μCi americium source  or by secondary electrons. 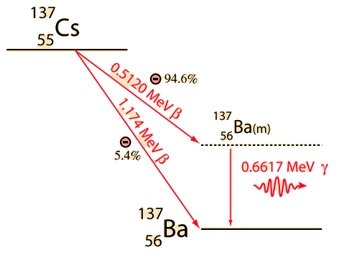 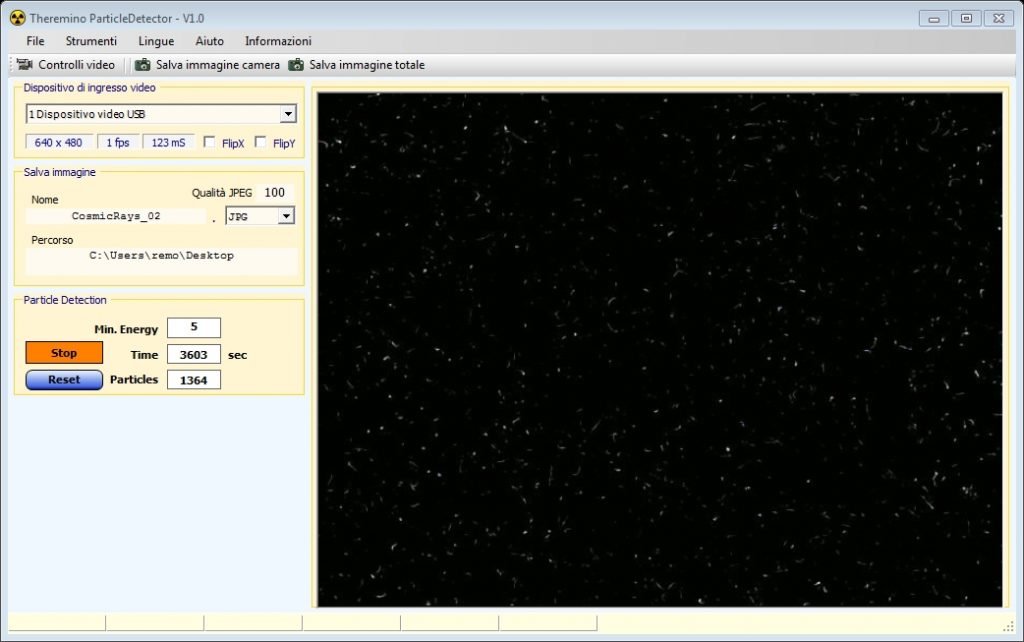 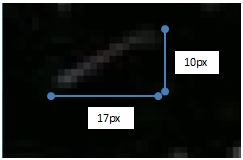 The CMOS sensor detects the beta radiation emitted by the decay of cesium. In the picture aside you see the magnified image of the track of an electron. 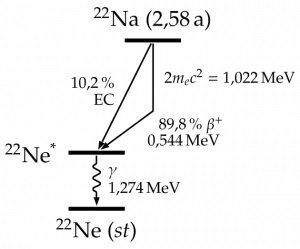 The isotope Na-22 decays (in 99.95% of cases) with a half-life of 2.6 years, by positron emission or electron capture to the first excited state of 22Ne 1,274 MeV (which then relaxes by emitting gamma photon). The positrons are emitted by the source at an energy of 544keV. When they annihilate, they produce two gamma photons of energy 0.511 MeV each. 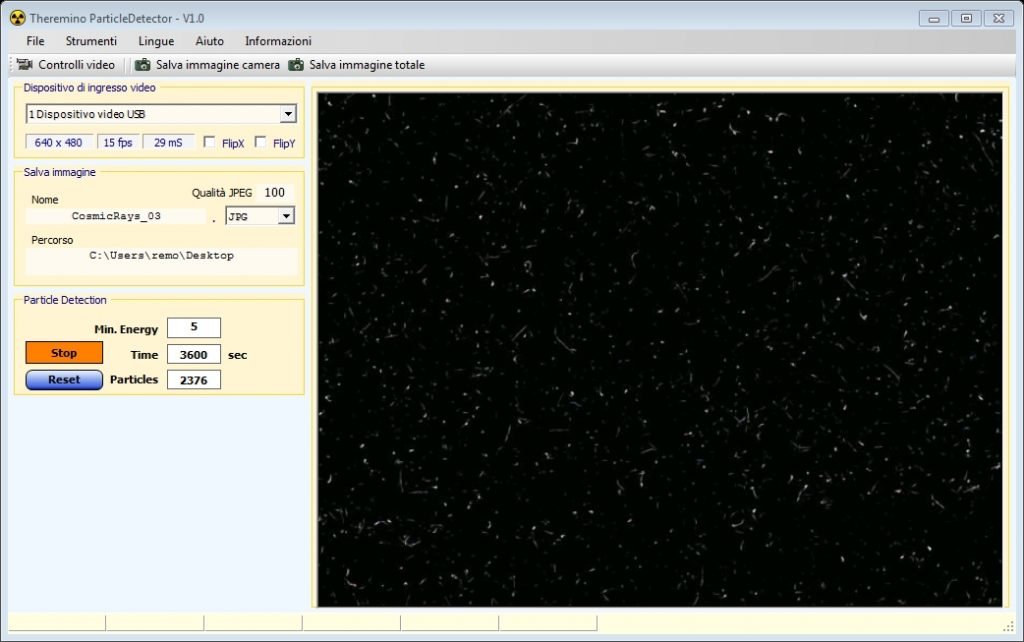 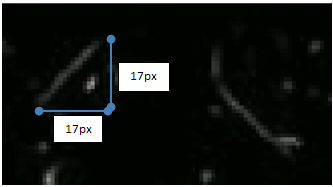 The CMOS sensor detects the beta radiation (positrons) emitted by the decay of sodium. In the picture aside you see the magnified image of the track of a positron. 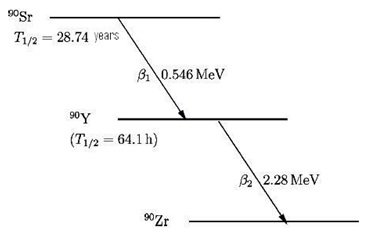 Strontium-90 is an isotope of strontium produced by the nuclear fission of uranium, having a radioactive half-life of 28.8 years. It undergoes β-decay transformed into yttrium-90 , with an energy of 0.546 MeV decay. the beta decay of strontium 90 gives rise to the emission of beta particles with maximum energy of 0,546MeV and 2,28Mev. 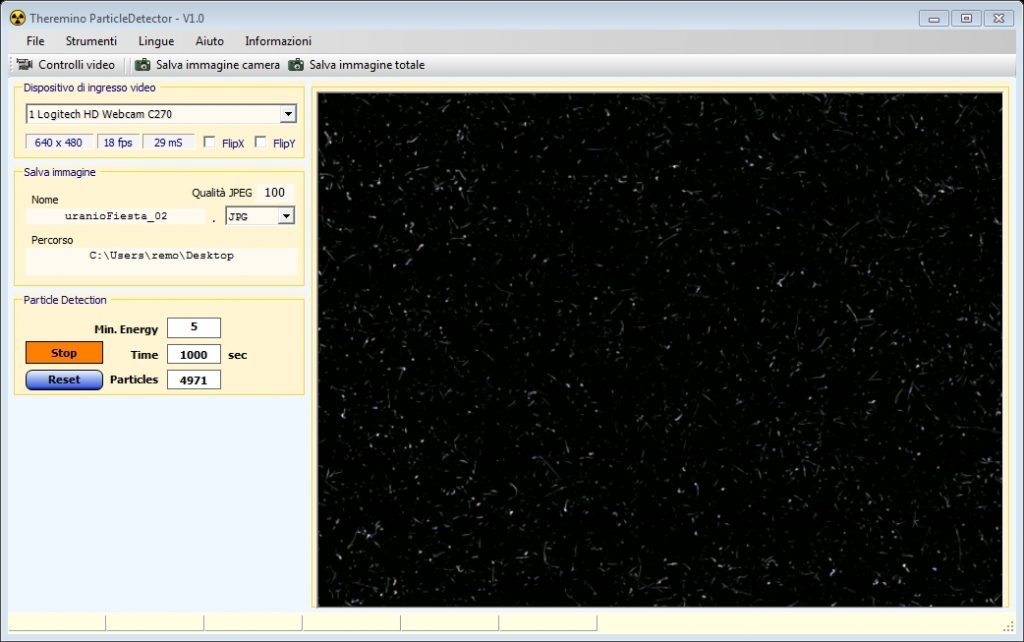 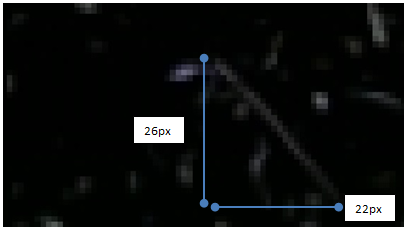 The CMOS sensor detects the beta radiation emitted by the decay of strontium. In the picture aside you see the magnified image of the track of an electron.

Thorium 232 decay chain with energies of alpha and beta particles. 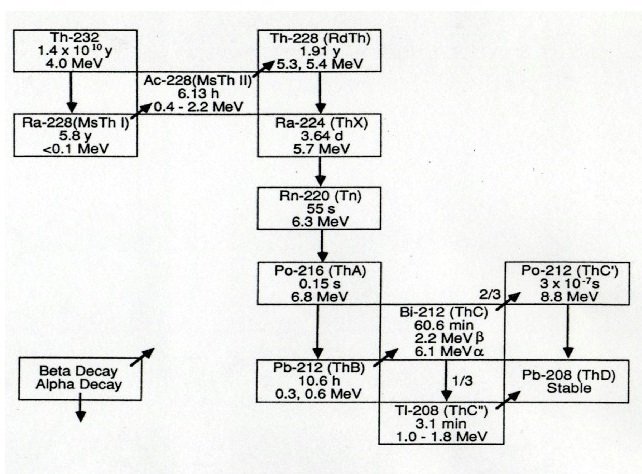 Uranium 238 decay chain with energies of alpha and beta particles. 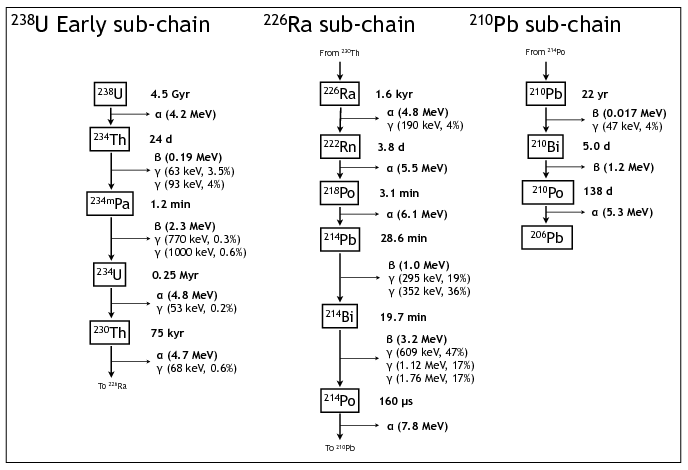 Thorium is a chemical element with symbol Th and atomic number 90. A radioactive actinide metal, thorium is one of only three radioactive elements that still occurs in quantity in nature as a primordial element (the other two being bismuth and uranium).
The decay chain of thorium produces alpha particles, beta particles and gamma radiation. In particular, the emitted beta particles are characterized by quite high energy. 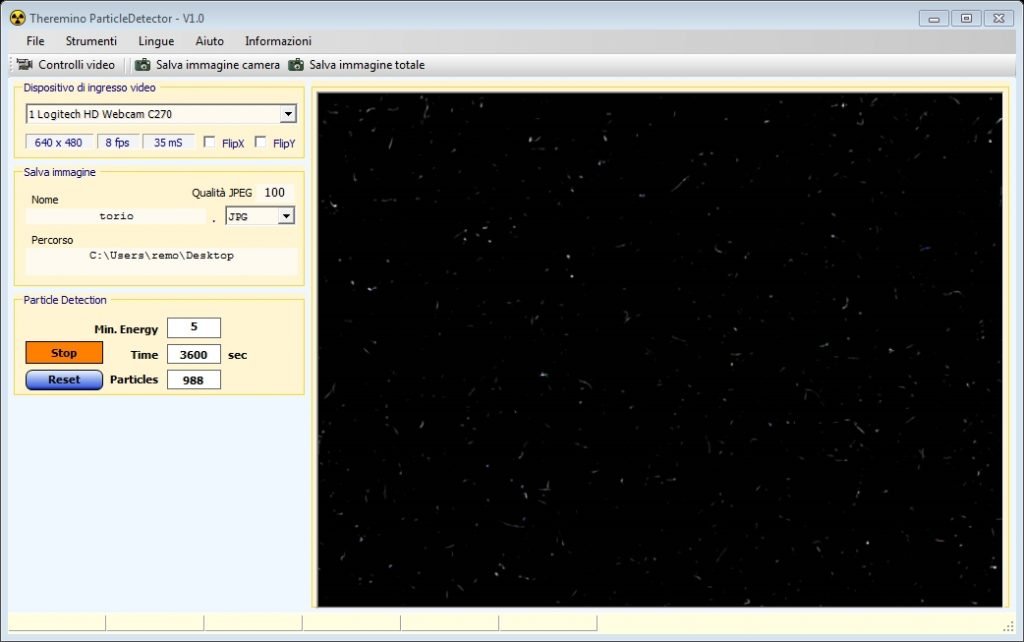 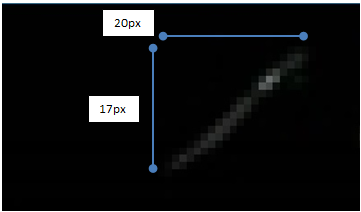 
The CMOS sensor detects the beta radiation emitted by the decay of thorium. In the picture aside you see the magnified image of the track of an electron.

Uranium is a chemical element with symbol U and atomic number 92. It is a silvery-white metal in the actinide series of the periodic table. A uranium atom has 92 protons and 92 electrons, of which 6 are valence electrons. Uranium is weakly radioactive because all its isotopes are unstable (with half-lives of the 6 naturally known isotopes, uranium-233 to uranium-238, varying between 69 years and 4.5 billion years). The most common isotopes of uranium are uranium-238 (which has 146 neutrons and accounts for almost 99.3% of the uranium found in nature) and uranium-235 (which has 143 neutrons, accounting for 0.7% of the element found naturally). Uraninite or Pitchblende is a highly radioactive ore, one of the main sources of uranium. 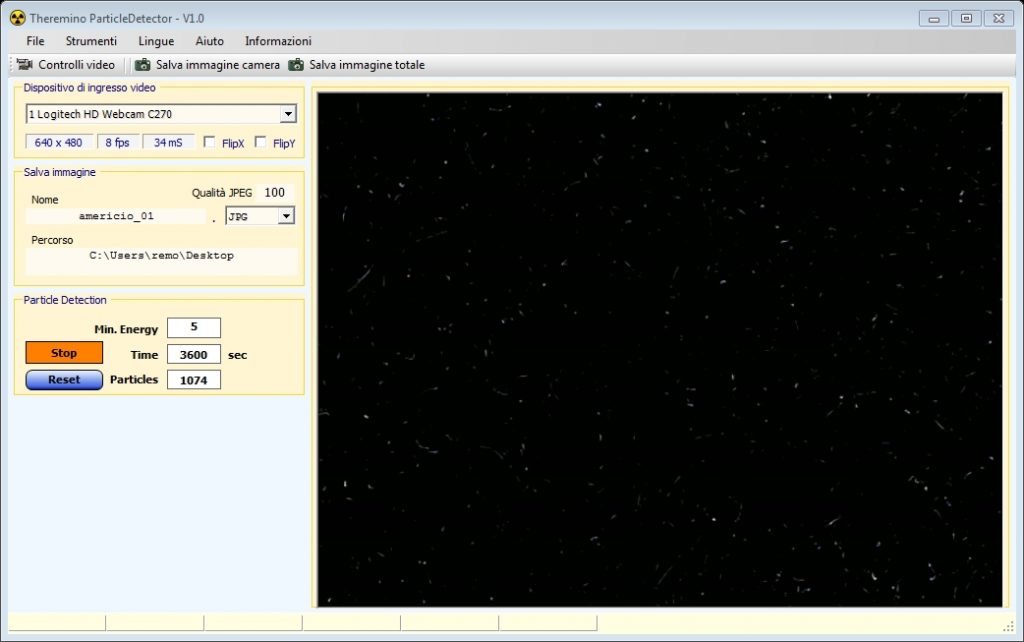 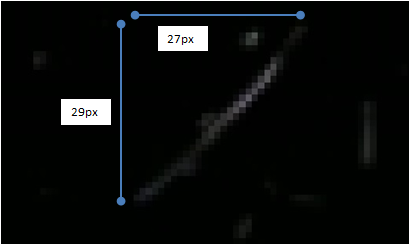 
The CMOS sensor detects the beta radiation emitted by the decay of uranium. In the picture aside you see the magnified image of the track of an electron.

Uranium was used in the past to give a bright color to ceramic glazes. The uranium content in the glaze has the distinction of being refined, so it does not contain all its decay products from radium to lead and bismuth. For this reason the isotopes from Radium onwards are present only in small part. 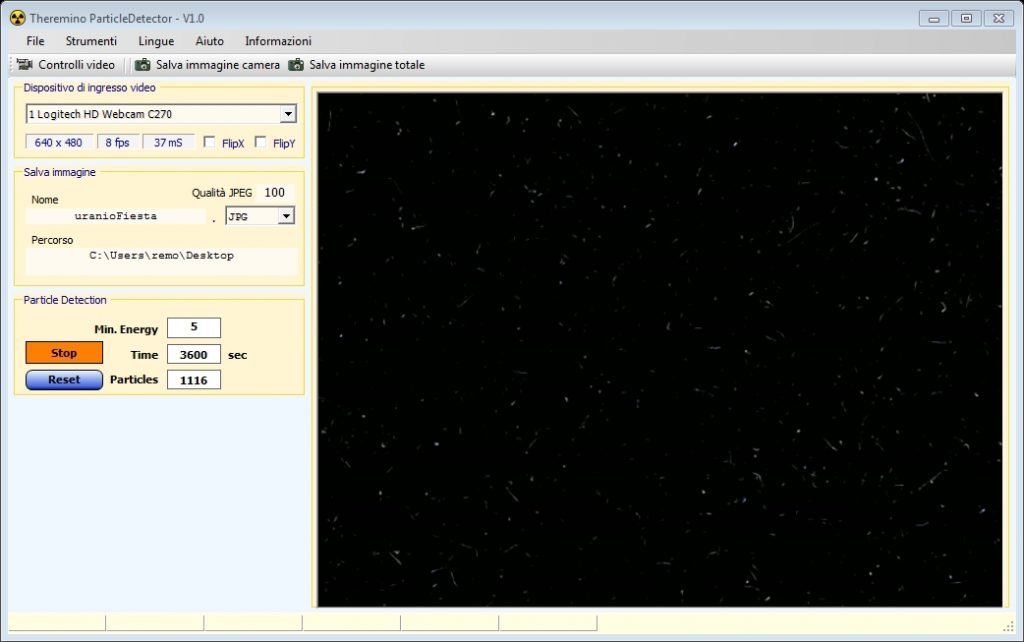 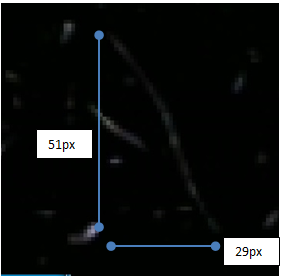 
The CMOS sensor detects the beta radiation emitted by the decay of uranium. In the picture aside you see the magnified image of the track of an electron.

Radium is a chemical element with symbol Ra and atomic number 88. It is the sixth element in the group 2 of the periodic table, also known as the alkaline earth metals. The pure radium color is almost pure white, but oxidizes easily when exposed to air and becomes black. All of the radio isotopes are highly radioactive, the more stable is the radio – isotope 226, which has a half-life of 1600 years, and decays into radon 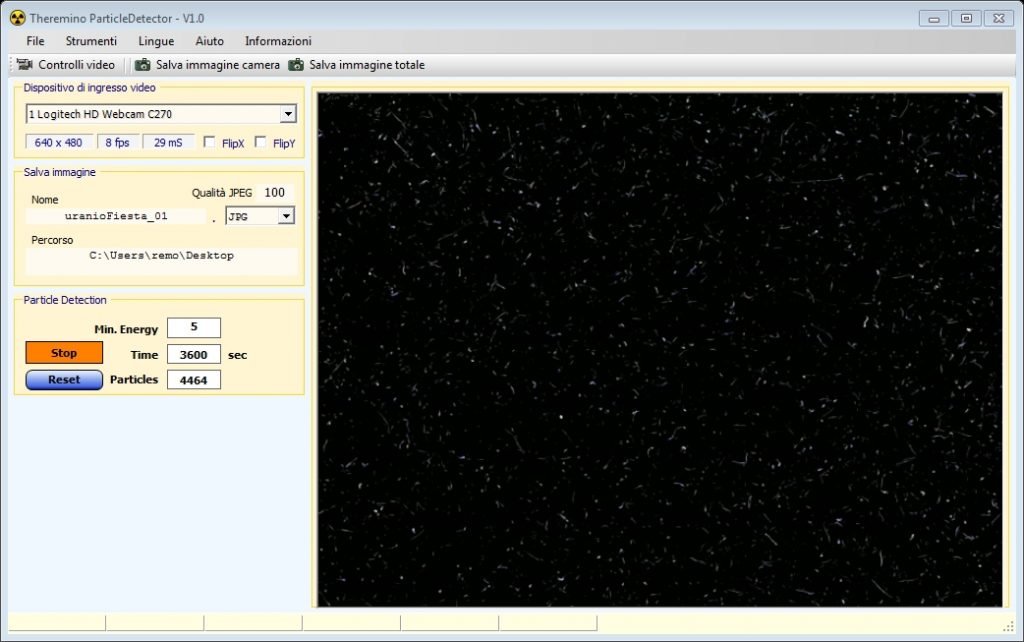 
The CMOS sensor detects the beta radiation emitted by the decay of radium. In the picture above you see the magnified image of the track of an electron.

With the Webcam sensor can be carried out surveys of cosmic muons. Just put it horizontal so as to maximize the sensitive surface and take an exposure lasting many hours. The two images below are relative to two measurements : 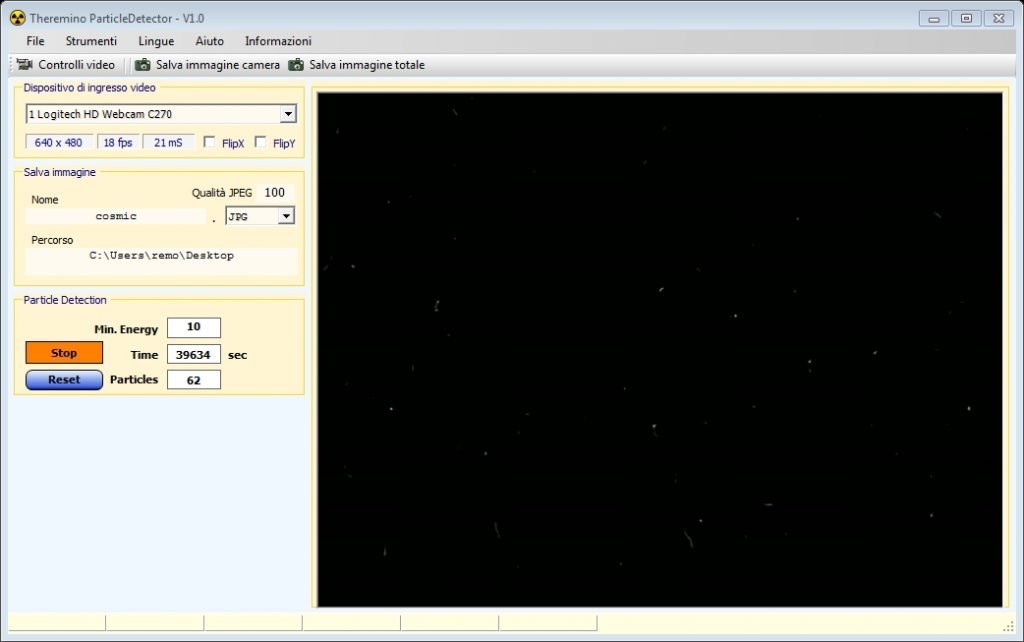 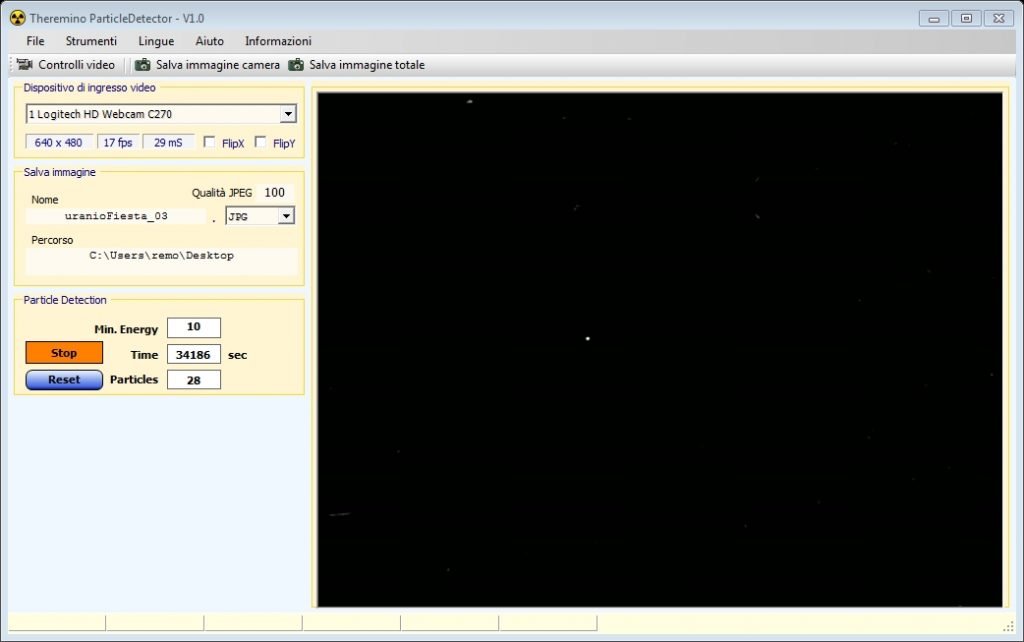 The two measurements agree with each other. The theoretical flow to the surface of 9,45 mm2, taking into account the fact that the “normal“ flow is of 1 CPM for an area of 1cm2, is about 0,0945 CPM. The measures are little lower than “theoretical” value due to the fact that the sensitive surface of the CMOS sensor is significantly less than the “geometric value”.

With the Webcam sensor you can make measurements on electromagnetic cascades generated in high density materials, such as lead. The image below shows the setup of the experience : the webcam is placed under sheets of lead with thickness of about 2cm. The “soft” component of cosmic rays interacting with the lead, generates secondary particles, electrons and positrons, which are detected by the webcam. 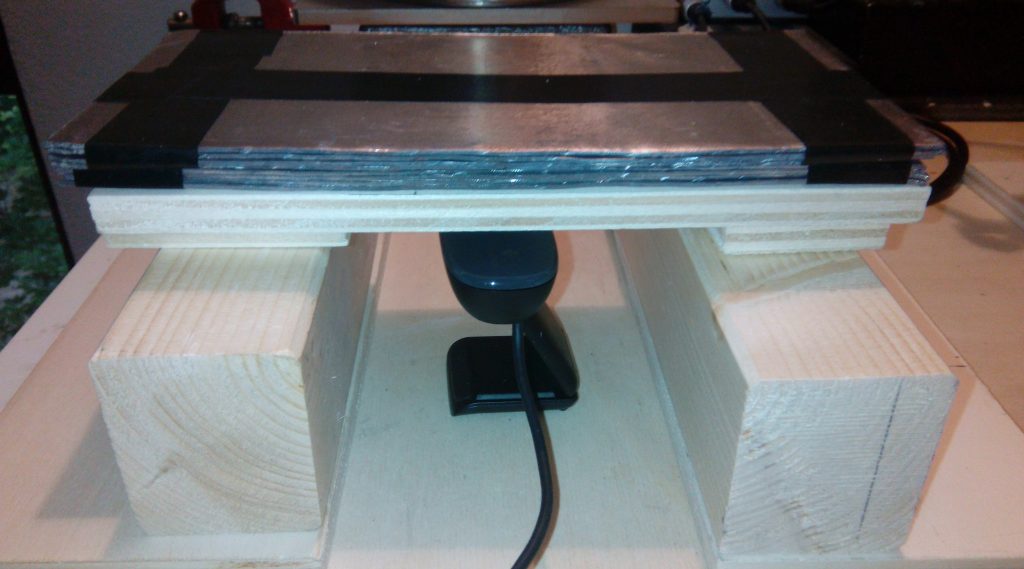 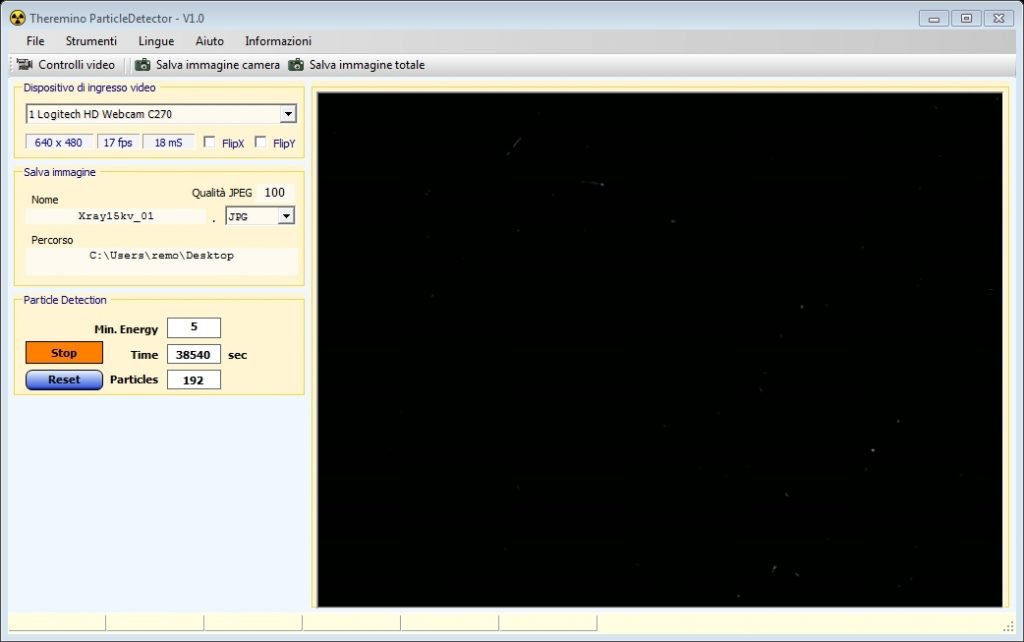 We used the Webcam sensor to do a test with a 15kV X-ray generator. In the figure we see the detail of the Cam positioned in front of the front window (beryllium) of the tube. The Cam is sensitive, even if with low efficiency, to the X-ray. Below you see the detail of some pixels activated by X photons. The pixel brightness is low due to the low X photon energy. 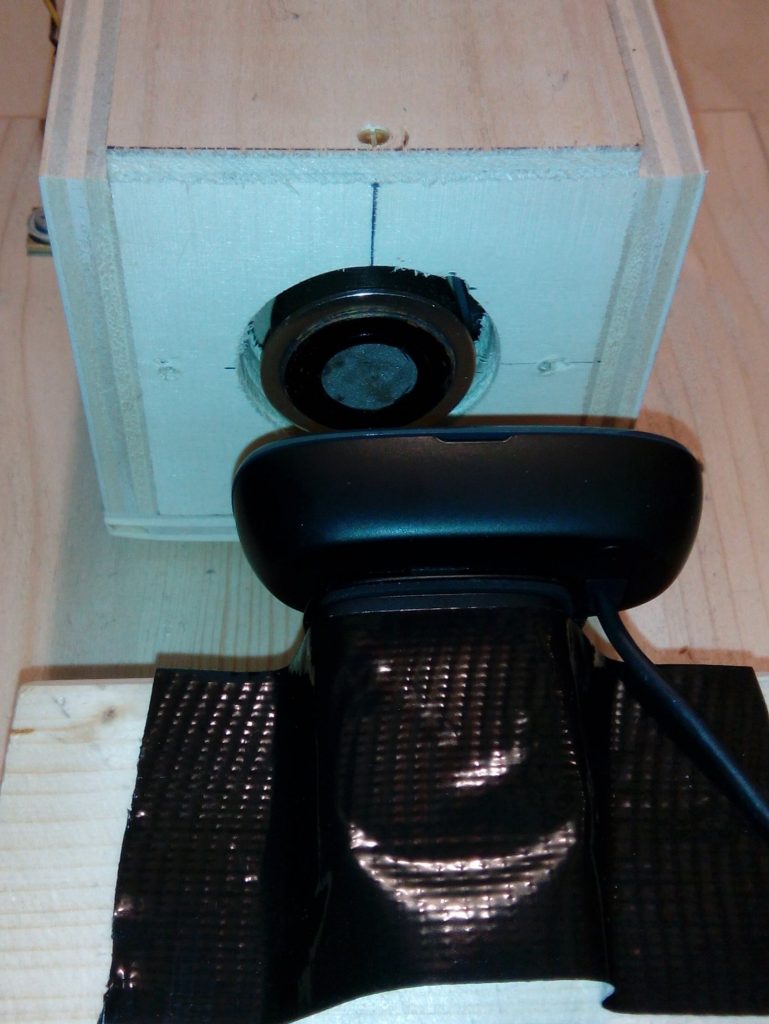 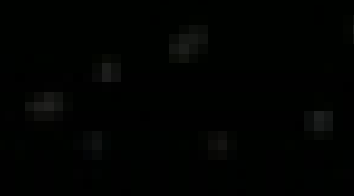 Tests have shown that a commercial webcam can be used as a simple “low cost” particles detector.

The sensitivity to alpha particles, however, is severely limited by the transparent protective layer of the CMOS sensor. Remove this protection would make the webcam sensitive also to alpha radiation, but it is a difficult operation which easily leads to the sensor break.

The webcam features a good sensitivity to the more penetrating beta radiation, the estimate of the length of the traces left by electrons detected by the sensor, can give rough information on the energy of the particles.

The webcam is also sensitive to cosmic particles such as muons, however the little surface of the sensor, limits the possibility of extensive use.