Light as a Particle 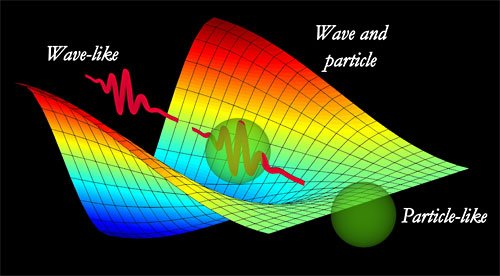 In this post we propose to highlight the quantum nature of light by means of the photon counting technique. For the light detection has been used a photomultiplier tube, which is able to detect a single photon. A dimmed LED driven by an ultra-short pulse has been used as light source.

Photon Counting with a PMT

In the measurement of weak light signals, the ultimate limit of sensitivity is to reveal the arrival of single quanta of optical radiation in the visible and near infrared, that is, individual photons. Given the low energy level associated with a photon it is evident the inherent difficulty in this measure.
The detection of individual photons can be made with solid-state sensors, such as avalanche photodiodes (APD) or photomultipliers (photomultiplier tube, PMT), in which between anode and cathode is interposed a sequence of electrodes , called dynodes.
An electron emitted from the photocathode is accelerated by a voltage of a few hundred volts and hit the first dynode, causing the emission of several secondary electrons (usually three to five), which in turn are accelerated towards the second dynode, where they cause a new emission of electrons, and so on. The number of electrons grows exponentially with the number of used dynodes and the amplification reaches values even higher than a million. The amplification factor is affected by statistical fluctuations which, however, given the nature of the amplification, are rather moderate.

The photomultipliers are very useful both as analog photodetectors, endowed with a high internal amplification, both as digital detectors of single photons, by connecting the output to a circuit that, starting from the pulses supplied by the detector in response to single photons, generate pulses suitable to be treated by counting circuits or for measuring the time of photon arrival. 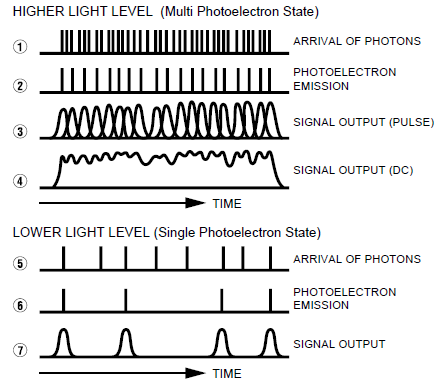 As a light source a normal diode LED (blue – UV ) has been used, driven by a circuit for the generation of ultra-short pulses. From the scheme below it can be seen that the LED is driven by an avalanche transistor ZTX415 biased at 270V. The charge is accumulated in the capacitor C1 and then released in a very short time when a pulse arrives at the base of the transistor. On the resistor R2, to 0.1ohm, it may be taken the signal that corresponds to the impulse of current flowing in the diode LED.
In the following paragraphs you see the oscilloscope trace of the current pulse: is a spike of about 10V and a duration of 10ns, so extremely short. In order to reduce the pulse duration it is necessary to reduce the parasitic inductances of the path followed by the current, in particular the resistance R2 and the connections between C1, the transistor, the LED, R3 and D1. This can be achieved by very short wiring and using a large ground area. The resistors are also to be chosen with low parasitic inductance. 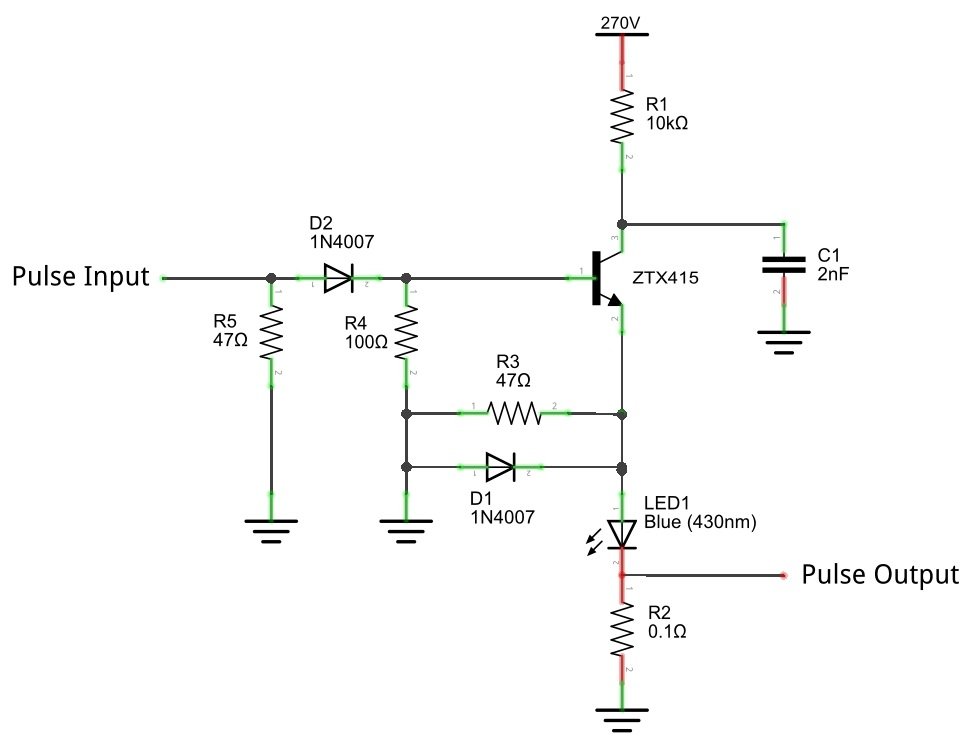 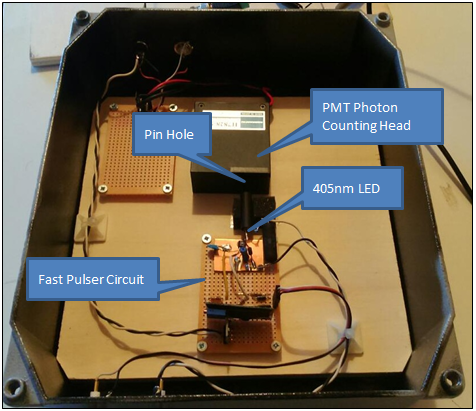 First of all tests have been performed with the LED off in order to evaluate the “dark rate”. The dark rate are the pulses generated by the PMT due to the thermal noise. two tests have been made : one at room temperature of 20 °C and another at about 0 °C, obtained by keeping the counting box in contact with ice. It is evident that lowering the temperature of the PMT the dark rate drops considerably :

Subsequently, tests have been made with very low levels of light, so as to highlight the counting of individual photons. 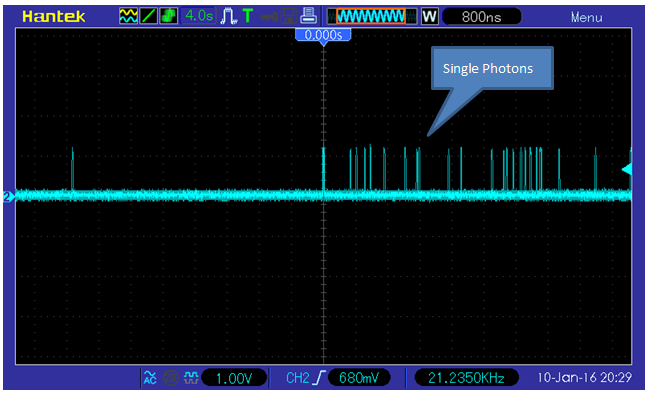 It has been made measurements of ” photon counting ” by using the light emitted from the LED driven by the fast pulser . 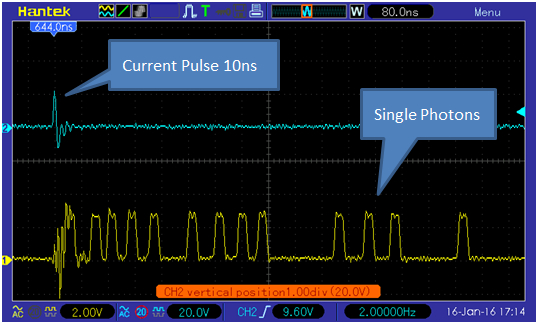 The upper blue trace shows the trend of the current pulse through the LED . The impulse, very short, has a duration of about 10ns. The yellow trace below is the output of photon counter module. Each pulse corresponds to a photon captured by the photocathode of the PMT. 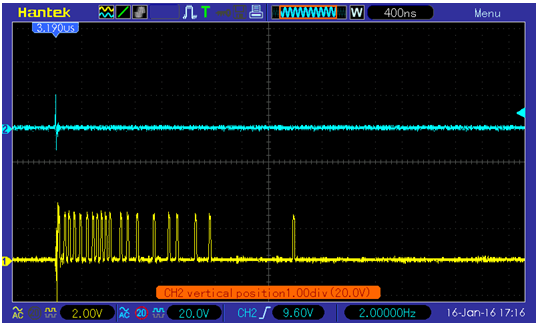 Oscilloscope Trace extended on a time duration of a few microseconds . It is clear that the photonic pulses are extended approximately from 2 to 3 microseconds after the current pulse. 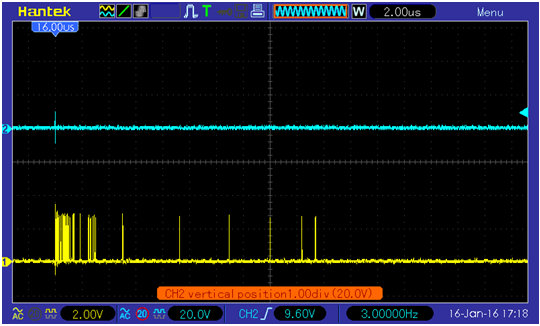 Oscilloscope Trace  extended on a time duration of a few tens of microseconds. It is evident that the photonic pulses are thickened just after the current pulse and then go decreasing because the LED is fading.

Pdf document with the description of the project : PhotonCounter_ENG