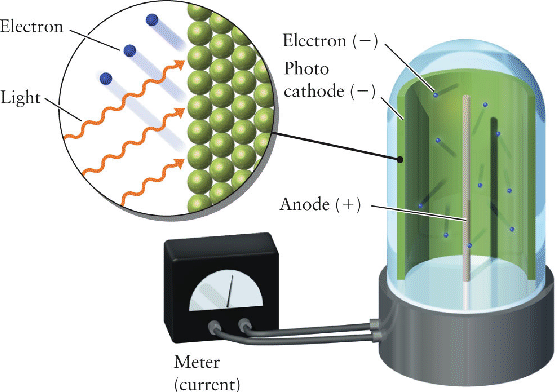 The photoelectric effect is the observation that many metals emit electrons when light shines upon them. Electrons emitted in this manner can be called photo-electrons.

According to classical electromagnetic theory, this effect can be attributed to the transfer of energy from the light to an electron in the metal. From this perspective, an alteration in either the intensity or wavelength of light would induce changes in the rate of emission of electrons from the metal. Furthermore, according to this theory, a sufficiently dim light would be expected to show a time lag between the initial shining of its light and the subsequent emission of an electron. However, the experimental results did not correlate with either of the two predictions made by classical theory.

Instead, electrons are only dislodged by the impingement of photons when those photons reach or exceed a threshold frequency. Below that threshold, no electrons are emitted from the metal regardless of the light intensity or the length of time of exposure to the light. To make sense of the fact that light can eject electrons even if its intensity is low, Albert Einstein proposed that a beam of light is not a wave propagating through space, but rather a collection of discrete wave packets (photons), each with energy hf. This shed light on Max Planck’s previous discovery of the Planck relation (E = hf) linking energy (E) and frequency (f) as arising from quantization of energy. The factor h is known as the Planck constant :

The quantum interpretation of the photoelectric effect is the following :

The photoelectric effect provides evidence, in a way not related to the black-body radiation, that the electromagnetic radiation consists of quanta of energy hf.
These experimental facts can be easily verified by measuring the stopping potential V0, which is the electrical voltage needed to stop the flow of electrons generated by the effect photoelectric :

The measurement should be done ​​at different wavelengths.
The values ​​of constants to be used :

For the experimental verification of the photoelectric effect, we used the setup described in the following diagram :

As phototube we used the model 1P39 characterized by an anode coated with Sb – Cs with spectral response of type S -4 , suitable for this type of use :

As photon source we used LED of various colors, whose spectra were acquired with the Spectrometer DIY and with the software Theremino Spectrometer. 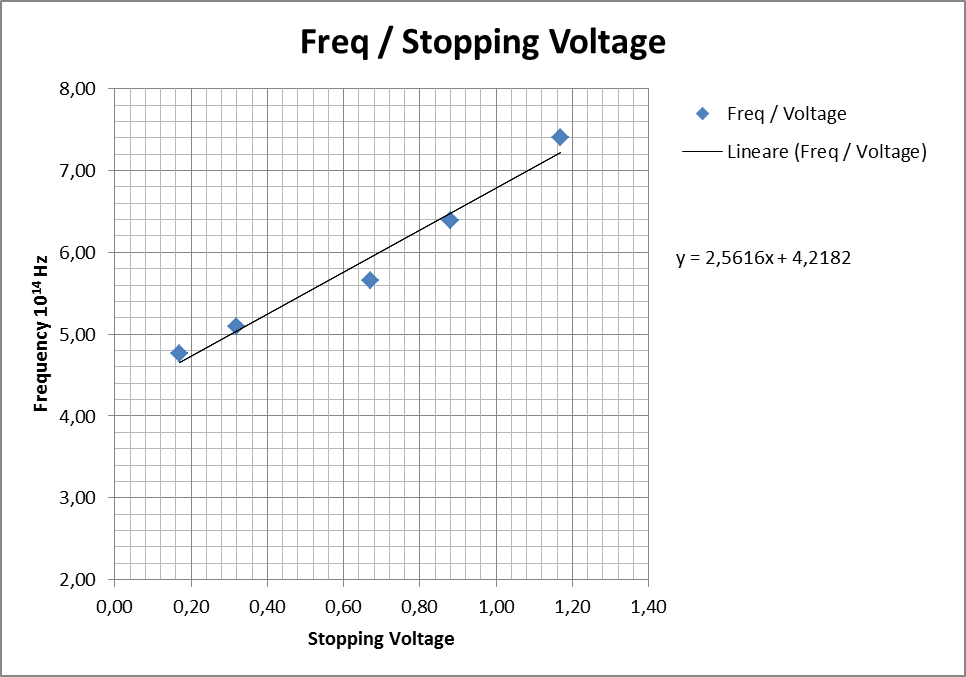 From the linear regression line of the graph above we get the following values ​​of the ratio h/e and the work function :

The agreement with the correct values ​​seems good.

Pdf document with the complete description of the experiment : EffettoFotoelettrico_ENG