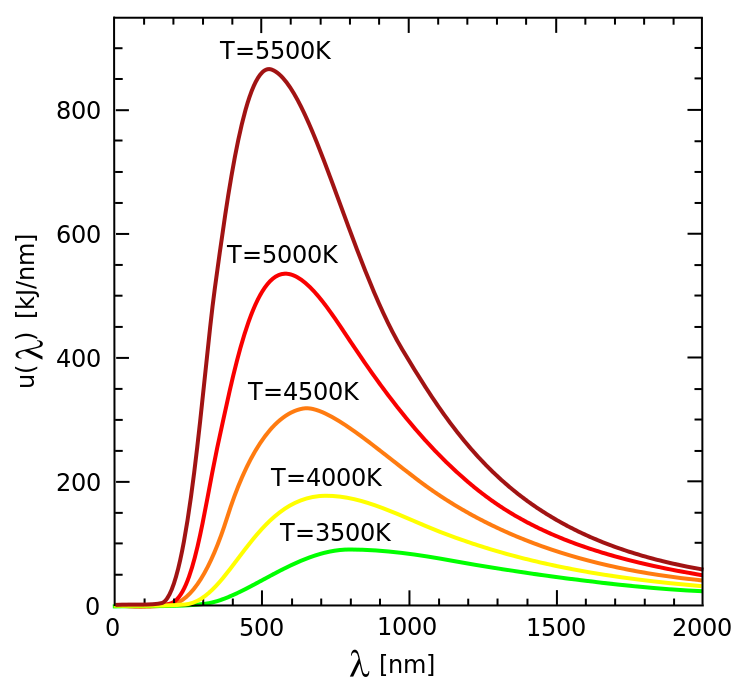 Not reflecting, the black body absorbs all the incident energy and therefore, for energy conservation, re- radiates the whole amount of absorbed energy (emission coefficient equal to that of absorption and equal to one) and therefore has its name solely to the absence of reflection.

With the self-built spectrometer described in one of the previous posts, with the software Theremino Spectrometer and  with an halogen bulb we will try to conduct experiments on the black body spectrum.

An Halogen bulb as a Black Body

As an approximation of a “black body” a 24V halogen bulb was used. The bulb was powered at voltages ranging from 0 to 25V. For each used voltage value the current was measured so as to obtain the resistance of the filament and hence its temperature, the emission spectrum was also acquired with the self-built grating spectrometer.

In incandescent lamps, including halogen lamps, visible radiation is produced by making the filament incandescent with the heat generated by Joule effect with electric current. For a metallic conductor the electrical resistance value varies with temperature according to the relation (approximate but valid in a wide temperature range) :

Therefore, by measuring the resistance value at room temperature R0, for example with an ohmmeter (multi-meter), and calculating RT, from the measurement of the potential difference and electric current intensity of the lamp on ( RT = V / I ) , we can obtain the temperature T of the filament.

The Webcam Spectrometer has important limitations due to the nonlinear behavior of the webcam and due to the fact that it easily go in saturation. The spectra are for illustration only and may give only qualitative information on the shape of the spectrum. In particular the intensity of the measured radiation cannot be considered a reliable data.

Despite these limitations it is evident the bell shaped curve and the displacement of the emission toward shorter wavelengths when the temperature of the filament is increased, according to Planck’s and Wien law.

The Sun as a black Body

The sun behaves as a black body. Its spectrum closely follows the profile of the spectrum of an ideal black body. Overlapping the emission spectrum can be noted numerous absorption bands (the so-called Fraunhofer lines) that correspond to the presence of elements in the solar atmosphere and also in the Earth’s atmosphere .

Pdf document with the complete description of the experiment: RadiazioneCorpoNero_ENG