Abstract: in this article we describe the application of the Raman spectrometer (in backscattering configuration) to the analysis of plastic polymers with the aim of demonstrating the applicability of the tool to recognize the type of plastic. In the image above we show the Raman spectra of some plastic materials, superimposed in a single graph to compare them and highlight the differences.

Raman spectroscopy is a characterization technique that detects bond vibrations that change the polarizability of the molecule. It is therefore a non-destructive technique and is suitable for examining both polymers and their additives. In general, Raman spectra can be used for identification purposes by referring to a collection of reference spectra called “fingerprints”. These spectra can provide information on the identity and molecular characteristics of the polymer under analysis. Examples of molecular features that are more suitable for Raman spectroscopy than other spectroscopic techniques are sulfur bonds, such as -S-S – and -C-S-: for chemical processes where vulcanization is an important aspect, the detection of sulfur in chemical bonds it can be particularly important.

With our Raman spectrometer we analyzed a series of samples of plastic materials. In the following paragraphs we present the main results obtained.

Polystyrene is the polymer of styrene, whose structural formula is shown in the image on the side. Styrene is an aromatic hydrocarbon. The vinyl group linked to the aromatic ring is characterized by a high reactivity. Polystyrene is a thermoplastic aromatic polymer with a linear structure. At room temperature it is a glassy solid; above its glass transition temperature, about 100 °C, it acquires plasticity and is able to flow. Chemically inert with respect to many corrosive agents, it is soluble in organic chlorinated solvents, in trichlorethylene, in acetone and in some aromatic solvents such as benzene and toluene.
In figure 1 we report the Raman spectrum of polystyrene. The frequencies of vibration depend on the masses of the atoms involved and the strength of the bonds between them. Heavy atoms and weak bonds have low Raman shifts. Light atoms and strong bonds have high Raman shifts. We see high frequency carbon-hydrogen (C-H) vibrations in the spectrum of polystyrene at around 3000 cm-1. Low frequency carbon-carbon (C-C) vibrations are approximately 800 cm-1. C-H vibrations have a higher frequency than C-C vibrations because hydrogen is lighter than carbon. We see the vibrations of two carbon atoms linked by double bonds (C=C) at about 1600 cm-1 while two carbon atoms linked by a weaker single bond (C-C) at about 800 cm-1. By closely inspecting the spectrum we notice that the C-H vibrations of the polystyrene appear in two bands, at about 2900 cm-1 and greater than 3000 cm-1. The carbon atoms in the first case are part of carbon chains (“aliphatic”), while in the second case they are part of carbon rings (“aromatic”). Then there is the intense band at about 1000 cm-1 due to the expansion/contraction vibration modes of the benzene ring.

A polycarbonate is a thermoplastic polymer obtained from carbonic acid. Polycarbonates belong, with many distinctions, to polyester resins. The most important is the one derived from bisphenol A, of which we report the structural formula in the side image. The properties that characterize them derive from their chemical structure. In fact, compared to other polymers, the exceptional qualities of transparency to visible light radiation and impact resistance stand out, for these reasons polycarbonate is used in various fields of application.
In figure 2 we report the Raman spectrum of polycarbonate. The main bands due to the C-C, C=C, CH3 bonds are recognized, the spectrum is similar to that of polystyrene. It differs from the latter above all in the band at about 3000 cm-1 and in the “low” part of the spectrum.

Polymethylmethacrylate (in abbreviated form PMMA) is a plastic material formed by polymers of methyl methacrylate, shown in the image on the side, methyl ester of methacrylic acid. It is a thermoplastic polymer. It is also known by the trade names of Plexiglas, Perspex and Lucite. It is usually very transparent, more than glass, to the point that it possesses characteristics of transparency similar to optical fiber and with the property of being almost unbreakable. In figure 3 we report the Raman spectrum of PMMA, the main bands due to the C-C, C=C, CH3 and C-O bonds are recognized.

Polyethylene (also known as polythene) is the simplest of the synthetic polymers and is the most common of plastics. It has chemical formula (-C2H4-)n where the degree of polymerization n can reach a few million. The chains can be of variable length and more or less branched. Polyethylene is a thermoplastic resin, it appears as a transparent (amorphous form) or white (crystalline form) solid with excellent insulating properties and chemical stability, it is a very versatile material and one of the cheapest plastics.
The Raman spectrum is shown in figure 4, we note the bands due to the stretching frequencies of the C-H bonds, at about 3000 cm-1, at the bending and twisting frequencies of the C-H bonds, at 1300 and at about 1400 cm-1, and to the stretching of the C-C bonds, between 1000 and 1200 cm-1.

High density polyethylene has the same molecular structure as “normal” polyethylene and also the Raman spectra are very similar, as can be seen by comparing figure 5 with the previous figure 4.

Polyethylene terephthalate is a thermoplastic resin suitable for food contact, belonging to the family of polyesters. The structure formula of the structural monomer is shown in the side image. Depending on production processes and thermal history, polyethylene terephthalate can exist in an amorphous (transparent) or semi-crystalline (white and opaque) form. It is also used for its electrical properties, chemical resistance and high temperature performance.
The Raman spectrum of PET is shown in figure 6. Around 3000 cm-1 we find the bands due to the stretching frequencies of the C-H bonds, while at about 1700 cm-1 there is the maximum relative to the C=O bond and at about 1600 cm-1 the maximum relative to the C-C bond in the aromatic ring.

Polypropylene (or polypropene, abbreviated to PP) is a thermoplastic polymer that can exhibit different tacticity (tacticity is the relative stereochemical configuration between carbon atoms). The structural monomer of polypropylene is propylene whose structural formula is shown in the image on the side. The most interesting propylene from a commercial point of view is the isotactic one: it is a semi-crystalline polymer characterized by a high tensile strength, low density, good thermal and abrasion resistance.
In figure 7 we report the Raman spectrum of polypropylene, the main bands due to the C-C, CH3 and CH2 bonds are recognized. 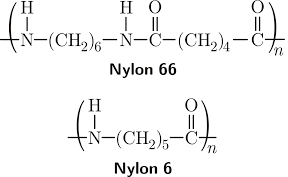 Polyamides (PA) are macromolecules characterized by the CO-NH amide group, on which many properties of this type of compounds depend. Polyamides can be synthesized by condensation polymerization of a dicarboxylic acid and a diamine or by ring-opening polymerization of a lactam. On the side we report the structural formula of two polyamides: nylon 6 and nylon 66.
In figure 8 we show the Raman spectrum which is characterized by the typical bands of the C-H and C=O bonds to which the bands at 3300 cm-1 and at 1250 cm-1 connected to the N-H bond are added.