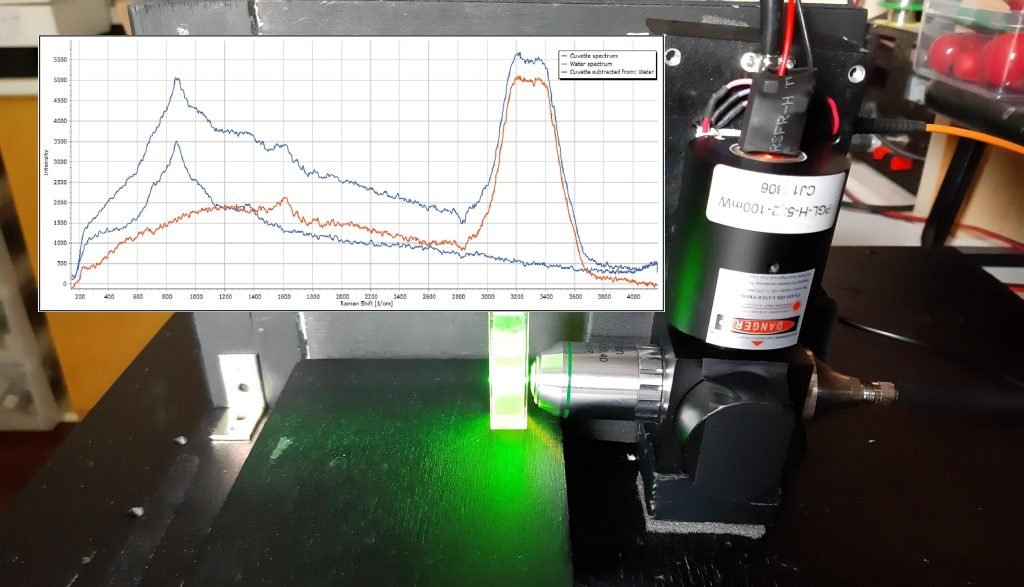 Abstract: in this article we describe the construction of a DIY Raman system, in backscattering configuration, based on a 532 nm DPSS laser and a B&W Tek surplus spectrometer.  The system is equipped with optical fiber and sharp-edge filters for blocking the radiation from excitation laser.

In a series of previous articles we have described our DIY Raman instrumentation and some significant applications (for example see Raman System DIY, Raman Spectroscopy of Organic and Inorganic Molecules). Now we want to expand the instrumentation by adopting the classic backscattering configuration shown in figure 1. The first instrumentation had the excitation laser and a notch filter with the collection of diffused light, at 90 ° with respect to the direction of the laser beam. In the backscattering configuration, the laser beam is directed onto the sample by means of a dichroic mirror / beam splitter, the laser beam is then focused on the sample by means of a lens which also has the task of collecting the light scattered by the sample. The diffused light passes through the dichroic mirror and is filtered by the notch filter which has the task of eliminating the Rayleigh diffusion at the same λ of the excitation. The light radiation is thus sent to the spectrometer to be analyzed. 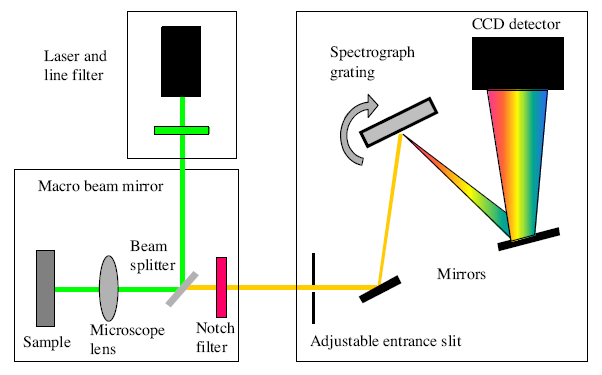 Fig 1 – Basic diagram of a Raman spectrometer in backscattering configuration

The laser is the 100mW PGL-H-532nm model from manufacturer CNI Laser. It is a source with good monochromaticity with a line width <0.2 nm and a divergence <1.5 mrad. The laser is powered by a voltage of 3 V and absorbs about 0.3 A. The laser is equipped with a bulk cylindrical aluminum heat exchanger which is kept cool by a TEC device. In any case, the laser must be “heated up” for a couple of minutes before being used as a Raman excitation source. The laser is inserted into the Thunderoptics cuvette holder cell which is used as a receptacle for the dichroic mirror / beam splitter. The microscope objective is positioned on one side of the cell and focuses the laser beam on the sample to be examined, while on the opposite side is the optics to collect the Raman scattered light and convey the light into the optical fiber. The Raman probe is shown in figure 2.

The light collected by the fiber is filtered with a sharp-edge long-pass filter that blocks wavelengths below 540 nm and transmits the greater ones. The filter is placed at the collimator input of the optical fiber that brings the signal to the spectrometer. As already mentioned above, the purpose of the filter is to make sure that the Rayleigh radiation – much more intense than the Raman scattering – does not reach the spectrometer where it could cause problems in detecting the Raman bands with the lowest Raman shift, i.e. closer to the wavelength of excitation.

The dichroic mirror was obtained from a decommissioned equipment (fluorescence cube) and is an Omega Optical 540DRLP Dichroic Mirror. In practice, at the angle of 45° it reflects λ smaller than 540 nm (the laser emits at 532 nm), while it allows λ greater than 540 nm to pass. The dichroic mirror allows, in the backscattering configuration, to easily separate the excitation source from the backscattered light at greater λ.

The microscope objective is a 20X with a numerical aperture of 0.4 and a working distance of 2.4 mm, it is an Infinity model easily available on eBay. 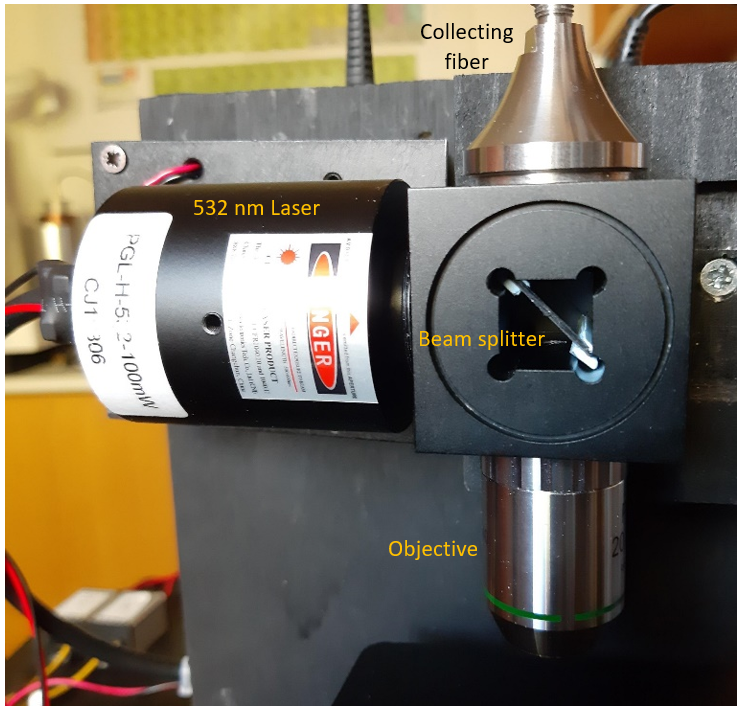 Fig 2 – Detail of the Raman probe made up of laser, beam splitter, lens and light collecting fiber

The Raman probe is placed on a wooden base, on which the various components are solidly fixed, in order to maintain optical alignment. The support base can be positioned vertically, as shown in figure 3, or horizontally, as shown in figure 4. To examine liquid samples contained in test tubes it is convenient to use the horizontal configuration, while to analyze solid samples, even in granular form or in dust, vertical position can be convenient. 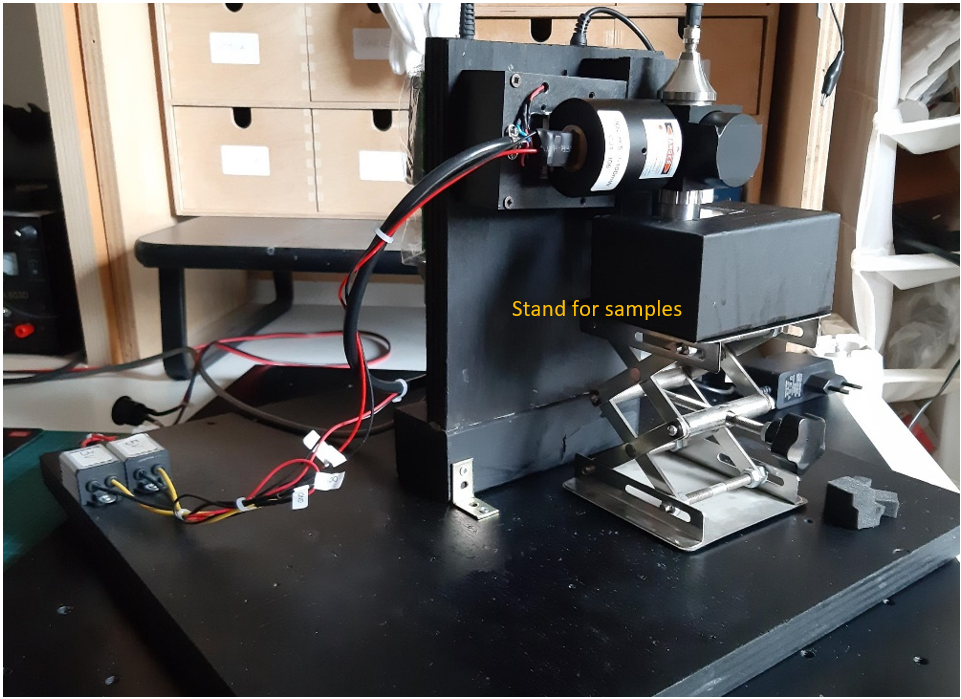 In figure 5 we show how the spectroscopic analysis of a solid sample such as a mineral is carried out. In this case it is a sulfur crystal. In the image it is not seen but during the analysis the objective and the sample must be covered by a screen which has the purpose of both limiting the background light captured by the instrument and avoiding dangerous laser reflections. It is important that the operator always wear protective goggles when the laser is on. 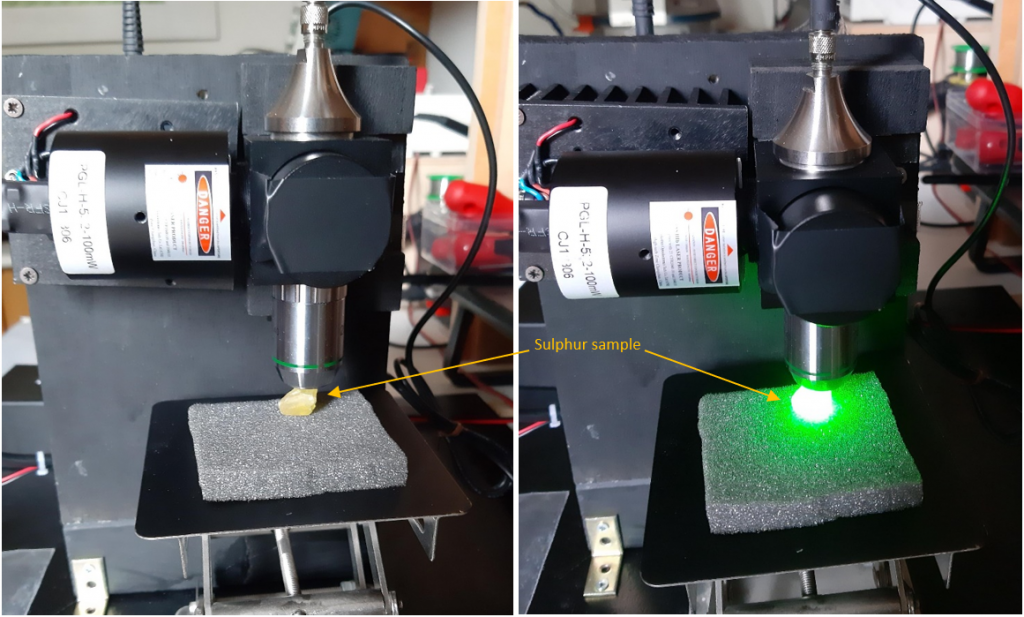 Compared to the previous instrument built for the collection of diffused light at 90° with respect to the direction of the laser beam, the configuration in backscattering, with the use of the objective that focuses the beam and collects the backscattered light, allows to obtain much higher efficiencies. . With the 90° configuration the integration times of the spectrometer are at least 10 seconds, while with the new apparatus it usually takes 500 ms to obtain a spectrum with a good signal-to-noise ratio. In this paragraph we report some significant Raman spectra.

The first test of our system was done with water. Water is a rather weak Raman diffuser and has a wide band between 3000 and 3600 cm-1. We have already studied the Raman spectrum of water quite thoroughly in the post Water Molecule Vibrations with Raman Spectroscopy. With the instrument in backscattering configuration we repeated the measurements with very convincing results. In figure 6 we report the Raman spectrum, in which we also take into account the background spectrum caused by the cuvette. In figure 7 we show the spectrum with the baseline correction, you can see the main band and also the secondary band at about 1600 cm-1. In figure 8 we show the Raman spectrum of ice.

Paraffin is the common name given to a mixture of hydrocarbons, mainly alkanes, whose molecules have chains with more than 20 carbon atoms. It is obtained from petroleum and appears as a waxy, whitish mass, insoluble in water and acids. We examined a solid paraffin sample with the Raman spectrometer. In Fig. 9 we report the Raman spectrum, in which we note the Raman maxima due to the vibration modes of the CH3 groups, around 3000 cm-1, of the CH2 group and of the C-C bond at frequencies between 800 – 1500 cm-1.

The diamond is one of the many allotropic forms in which carbon can occur; in particular, the diamond consists of a crystalline lattice of carbon atoms arranged according to a particular structure called tetrahedral. Interestingly, this is the thermodynamically unstable form of carbon which, in theory, by the second law of thermodynamics, should transform entirely into graphite. This does not happen because there is a need for a translation of the carbon atoms which, being bonded to each other in a tetrahedron structure, are kinetically prevented. Therefore the diamond is unstable from the thermodynamic point of view but stable from the kinetic point of view. In other words, it is a metastable material. Diamonds have a multitude of applications, thanks to their exceptional physical and chemical characteristics. The most relevant are the extreme hardness, the high optical dispersion index, the very high thermal conductivity, the great resistance to chemical agents and the very low coefficient of thermal expansion. The Raman spectrum is also particular, having only one maximum, well pronounced, at 1333 cm-1, as can be seen in figure 11 where we report the spectrum of the diamond compared to the spectrum of amorphous graphite. This Raman peak is due to the only vibration of the crystal lattice compatible with Raman excitation.

Sulfur, in crystalline form, also has a characteristic Raman spectrum with two pronounced peaks at 470 cm-1 and 225 cm-1, as seen in figure 12.

Silicon adopts the same crystalline structure as diamond and in fact it too has a single pronounced peak at about 520 cm-1. In figure 13 we report the Raman spectrum of the silicon sample that we analyzed with our spectrometer at 532 nm. The maximum we expect is present, however superimposed on a continuum probably due to the contribution of the polycrystalline matrix.

Raman spectroscopy also finds applications in the pharmaceutical sector, in order to identify, in a non-destructive way, and without contact, the active ingredients present in the drug. As an example, we report, in figure 14, the Raman spectra of two substances commonly used in many drugs: paracetamol and acetylsalicylic acid, the structural formulas of which we report below.

The structure of the two substances is similar and in fact even the Raman spectra have some points in common, in particular the peaks around 3000 cm-1 due to the stretching of the CH bonds. The so-called “finger print” part of the spectrum, between 500 and 1600 cm-1, on the other hand, has some differences that allow the two molecules to be distinguished. In figure 15 we report the Raman spectrum of a medicine, nisidine, which contains both paracetamol and acetylsalicylic acid: we see that the spectrum is the sum of the two components.

Raman spectroscopy is very often applied in the study of food, for example in the search for food fraud or to verify the degree of ripeness of a fruit or vegetable. One of the substances that give a strong Raman emission is β-carotene, or beta-carotene, a powerful antioxidant contained in many vegetables, starting with carrots. Beta-carotene is an organic compound of the group of carotenes, terpenic provitamins (isoprenoids), biochemically synthesized from eight isoprene units and therefore having 40 carbon atoms. Among the carotenes, β-carotene is distinguished by having a cyclohexene ring at both ends of the molecule. It is devoid of functional groups as well as very lipophilic. Β-carotene is the most common form of carotene in plants, it is an organic red-orange pigment abundant in fruits. With our spectrometer we have examined some plants in order to evaluate their beta-carotene content. In figure 16 we report the Raman spectrum obtained from a piece of carrot while in figure 17 the spectrum obtained from yellow pepper and red pepper. In both spectra we note the characteristic maxima corresponding to the C-C (1150 cm-1) and C = C (1500 cm-1) bonds.

In this project we have shown how it is possible to make a Raman spectrometer without spending astronomical amounts. The “key” of the project is the “second hand” B&W Tek spectrometer: it is not a brand new instrument but it does its job very well. A good laser source and a good quality sharp-edge filter makes the trick. Both the laser and the filter can be found on the online market for affordable price. In the next articles we will show in more detail the applications of our Raman DIY apparatus.