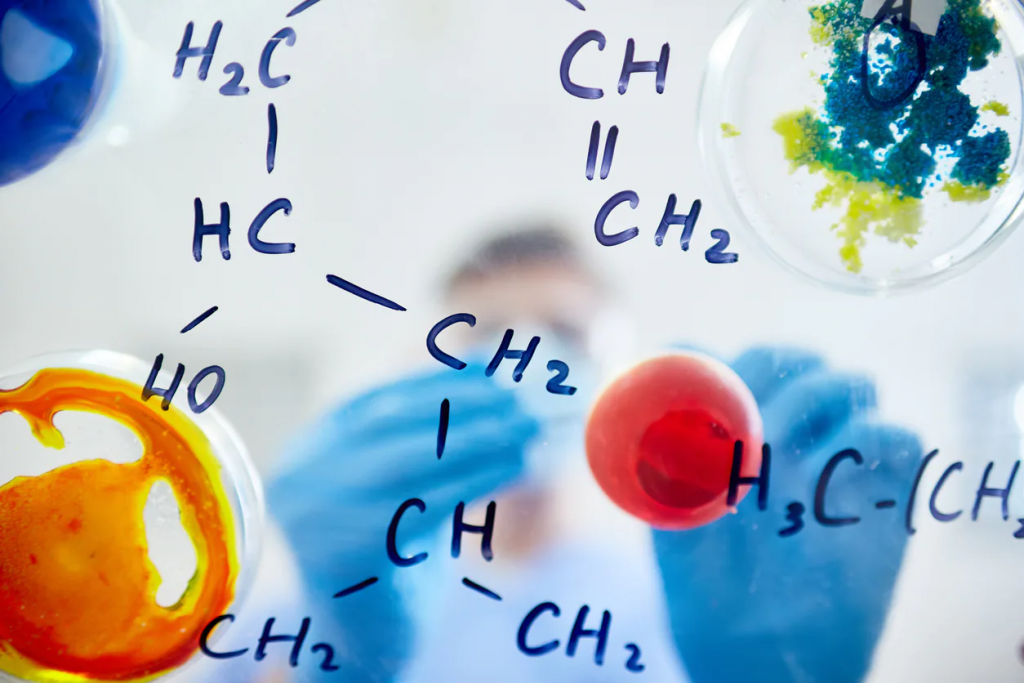 Abstract: in this post we describe the application of Raman spectroscopy in the study of a series of organic and inorganic compounds

The Raman spectrum (especially for organic molecules) is usually considered to be composed of three distinct regions:

Each of these regions of the Raman spectrum contains peaks with different chemical and biochemical information, and together they can provide a lot of information about the underlying chemistry. The position of a Raman peak provides information on that particular chemical bond. For bonds that are found only in a particular class of molecules or that are particularly abundant in a class of molecules, the presence of a peak at a given Raman shift could indicate the presence of those molecules in the test sample. The intensity of a Raman peak is related to the concentration of a particular chemical bond (and therefore potentially also to the concentration of a particular class of molecules). By comparing the normalized Raman spectra of two different samples acquired on the same system, the relative heights of the Raman peaks can be used to do a relative quantification of the different molecules present.

In most biological applications of Raman spectroscopy, fingerprint regions provide the greatest wealth of biochemical information. Here we can find peaks that correspond to information on nucleic acids, proteins and lipids, thus providing information on both the composition and the state of the cell or tissue under examination.

The “silent” region separates the “fingerprint” region from the high wavenumbers region of the Raman spectrum and is named after the fact that no endogenous biomolecule shows peaks in this region.

The high wavenumbers region consists of two main peaks: the peak centered at ~2900 cm-1 occurs for the stretching modes of the CH, CH2 and CH3 groups and therefore contains information on the presence of these chemical bonds, while the main peak at ~3400 cm-1 occurs due to the stretching mode of the OH bond and thus provides information on the water content of the substance.

Acetone is the simplest ketone. Its chemical formula is CH3-CO-CH3; the carbon atom to which the oxygen atom is bonded has sp2 hybridization and is located in the center of a triangle (approximately equilateral) whose vertices are made up of the oxygen atom and the other two carbon atoms. The CCC angle is a little less than 120°. Acetone is a mobile, colorless, volatile and flammable liquid with a characteristic ethereal odor; it is completely soluble in water, ethanol and ether and is mainly used as a general purpose solvent. In Fig. 1 we report the Raman spectrum of the molecule. The emission maxima corresponding to the modes of vibration, stretching and bending of the C-H bond of the methyl group CH3, and of the C-C and C-O bonds are evident.

Acetic acid is an organic chemical compound whose chemical formula is CH3COOH, best known for giving vinegar its characteristic acrid taste and pungent odor. In Fig. 2 we report the Raman spectrum of the molecule and the comparison with the Raman spectrum of acetone. The emission maxima corresponding to the modes of vibration, stretching and bending of the C-H bond of the methyl group CH3, and of the C-C and C-O bonds are evident. We note how the emission lines substantially coincide with the exception of the one corresponding to the C-C bond, this difference is due to the difference in the overall structure of the two molecules.

Fig 2 – Raman spectrum of Acetic acid and comparison with Acetone

This aromatic chemical compound, consisting of a benzene ring to which a methyl group is bonded, used as a solvent and as an ingredient in gasoline and some explosives. In Fig. 3 we report the Raman spectrum of the molecule. In the spectrum we note the presence of the line at 2900 cm-1 which corresponds to the stretching vibration mode of the methyl group CH3. At about 3000 cm-1 there is the stretching mode due to the bond between the methyl group and the benzene ring. Between 200 cm-1 and 1600 cm-1 there are the maximum emissions due to the vibrations of the benzene ring. The peak is also visible at about 200 cm-1, near the minimum limit of the instrument.

Paraffin is the common name given to a mixture of hydrocarbons, mainly alkanes, whose molecules have chains with more than 20 carbon atoms. It is obtained from petroleum and appears as a waxy, whitish mass, insoluble in water and acids. We examined a sample of liquid paraffin (also known as mineral oil or petroleum jelly) with the Raman spectrometer. In Fig. 4 we report the Raman spectrum obtained, in which we note the Raman maxima due to the vibration modes of the CH3, CH2 groups and of the C-C bond.

Nitric acid is a strong mineral acid as well as a strong oxidizing agent. Liquid at room temperature, colorless when very pure (light yellow otherwise); its chemical formula is HNO3, sometimes also rendered as NO2(OH). Its salts are called nitrates and are almost all soluble in water. In concentrated solution (> 68%) it is called fuming, due to the tendency to release reddish vapors of nitrogen dioxide (NO2). In Fig. 5 we report the Raman spectrum of nitric acid obtained with our spectrometer. We note the presence of the maxima corresponding to the vibration frequencies of the molecular groups NO3, NO2, and of the N-OH and N-O-N bonds.

Urea is a chemical compound with the formula CO(NH2)2; under normal conditions it appears as a colorless crystalline solid; it is the diamide of carbonic acid. The urea molecule is planar in the crystalline structure, while it assumes a pyramidal shape in the gas phase. In the solid state, each oxygen is bonded to two other molecules with a hydrogen bond. Given its ability to form hydrogen bonds, urea is highly soluble in water and can form clathrates by trapping numerous organic compounds. In Fig. 6 we report the Raman spectrum of an aqueous solution of urea. The peaks corresponding to the vibration modes of the NH2 molecular group and of the N-C-N bond are present.

Citric acid is a solid, colorless, tricarboxylic acid, with the brute formula C6H8O7, soluble in water over a wide pH range. In Fig. 7 we report the Raman spectrum of an aqueous solution of citric acid. In addition to the characteristic band due to the vibrations of the water molecule, there are some maximums, at 3000 cm-1 and at 1700 cm-1, which are characteristic of the molecule.

β-carotene, or beta-carotene, is an organic compound of the group of carotenes, terpenic provitamins (isoprenoids), biochemically synthesized from eight isoprene units and therefore having 40 carbon atoms. Among the carotenes, β-carotene is distinguished by having a cyclohexene ring at both ends of the molecule. It is devoid of functional groups as well as very lipophilic. β-carotene is the most common form of carotene in plants, it is an organic red-orange pigment abundant in fruits. With our spectrometer we examined a solution in beta-carotene seed oil extracted from carrots. In Fig. 8 we report the Raman spectrum, in which we note the characteristic maxima corresponding to the C-C and C=C bonds.

Polydimethylsiloxane (PDMS) is among the most common polysiloxanes. By subsequent hydrolysis of dimethylchlorosilane cyclic and linear siloxanes are obtained which subsequently polymerized give rise to silicone polymers. The PDMS polymer is formed from the sequence of the following monomer:

Dimethyl sulfoxide (DMSO) is an organic compound belonging to the category of sulfoxides. At room temperature it appears as a colorless and odorless liquid that is particularly hygroscopic. DMSO is an aprotic solvent, miscible with a wide range of solvents, including alcohols, ethers, ketones, chlorinated and aromatics. It is also miscible in all proportions with water. In Fig. 10 we report the Raman spectrum, in which we note the characteristic maxima corresponding to the bonds with the sulfur atom and the methyl group CH3. As for the silicon of the siloxanes, also in this case, due to the greater mass of the sulfur atom, the frequencies are lower than those characteristic of the bonds with carbon.

Isoamyl acetate is an organic ester compound of acetic acid and 3-methyl-1-butanol. It is a colorless liquid, slightly soluble in water, very soluble in most organic solvents. In Fig. 11 we report the Raman spectrum with the evidence of the maxima due to the methyl group CH3.

Dichloromethane (also abbreviated to DCM) is a chemical compound widely used as a solvent for organic chemistry. Its structure is similar of methane, but with two chlorine atoms that replace two hydrogen atoms. At room temperature it appears as a colorless and volatile liquid with a sweet smell. In Fig. 12 we report the Raman spectrum with the evidence of the maxima due to the C-H and C-Cl bonds. As for the silicon of siloxanes, also in this case, due to the greater mass of the chlorine atom, the frequencies are lower than those characteristic of the bonds with carbon.

Glycerol, or glycerin, is an organic compound whose structure contains three -OH groups (in other words it is a “triol”). At room temperature it is a rather thick, viscous and sweetish colorless liquid; the presence of three -OH groups makes it miscible with water in any proportion. In Fig. 13 we report the Raman spectrum of the glycerin molecule.

Our DIY Raman spectrometer has allowed the successful application of the Raman spectroscopy technique to the study of various organic molecules.